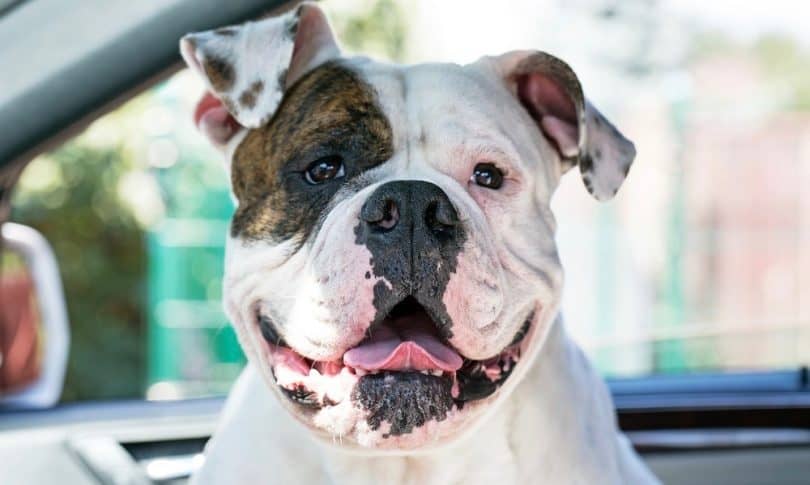 The American Bulldog makes for an excellent, loyal companion and a competent watchdog. Originally bred to guard, the American bulldog immediately raises the alarm when strangers approach.

But what is the average American Bulldog lifespan? They usually live about 12 years and are considered to be a healthy breed.

American bulldogs are very loyal to their human family and must be properly socialized from an early age otherwise, they will act aggressively towards anything or anyone they haven’t come across before. So, if you have young children, make sure you introduce the dog to their friends.

American bulldogs like humans better than they like their own kind. They also don’t tolerate cats, so be aware of that if you want one of these dogs but also want a cat.

Happy to be indoors, these high-energy dogs need a lot of daily exercise and stimulation. They need ample outdoor space to roam around in and should be taken for daily walks. This intelligent dog also needs mental stimulation for which there are many toys and games you can introduce your dog to.

American Bulldogs are not for people who have never had a dog before. These dogs are strong-willed and need a firm hand for early socialization and training.

In general, the American Bulldog is a healthy breed with a life expectancy of 10 to 14 years. They tend to be physically strong and robust.

They love to be active, which helps them to live long, healthy lives, but they are also prone to overeat and become overweight, which causes health problems.

When they are overweight, it’s even harder for them to breathe. Also, you can be sure that if your dog is overweight from a young age, it is likely to develop hip dysplasia later in life.

Different genetic lines of American bulldogs have different health issues and some are common to the entire breed. However, if you don’t allow your bulldog to indulge and let him exercise enough, he will most likely live a long and healthy life.

How Can I Extend the Life of My American Bulldog 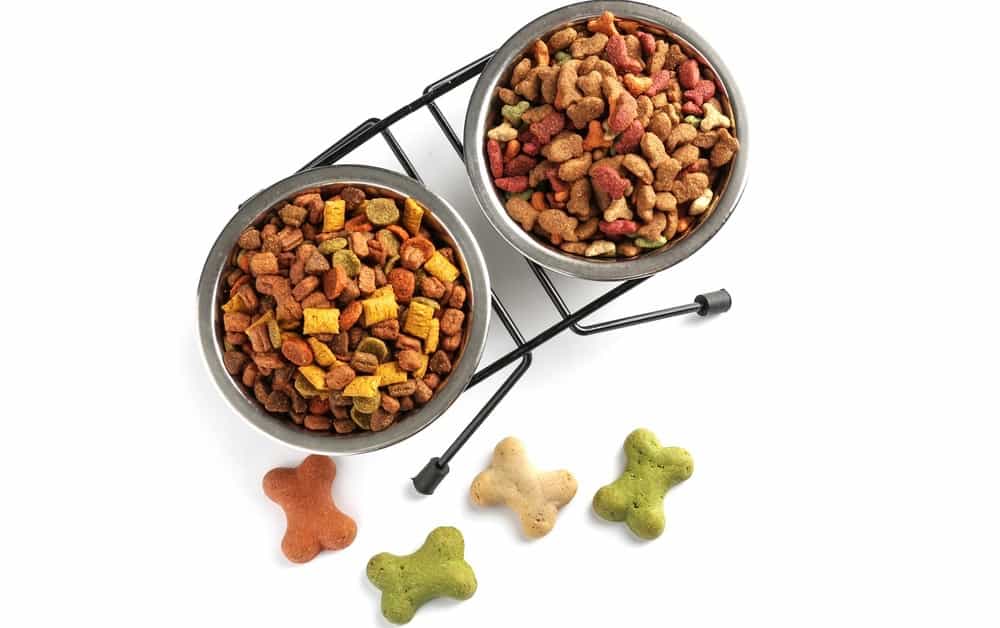 American Bulldogs are strong, muscular and active, so they need food with a reasonable amount of calories and protein to give them energy and support their muscles. Bulldogs need high-quality food with plenty of protein and fiber.

The food should be at least 30% protein, which should be real meat, not meat meal. Protein like salmon, tuna or chicken is good.

The food should contain omega-3 fatty acids and antioxidants, vitamins and minerals, and be free of poultry by-products, preservatives, and artificial flavors.

Choose dog food for active breeds and buy food that’s appropriate for your dog’s age. In other words, feed your dog high-quality puppy food when it’s young and adult food for when it’s a mature dog.

When you choose dog food for your puppy, choose large-breed puppy food and give it to your dog for the first 14 months.

Your dog needs about 2 cups of kibble twice a day. It’s best to avoid treats between meals as that just contributes to unnecessary weight gain.

This high-energy, athletic breed needs between 1 to 2 hours of exercise and activity a day to be physically and mentally healthy and avoid frustration.

The daily walk helps the dog get rid of some pent-up energy, and the smells and sights along the way stimulate him. You can take your dog for long walks of up to 45 minutes.

In addition to a daily walk, your dog needs short spurts of high-intensity exercise to stimulate him further and maintain his strong muscles. 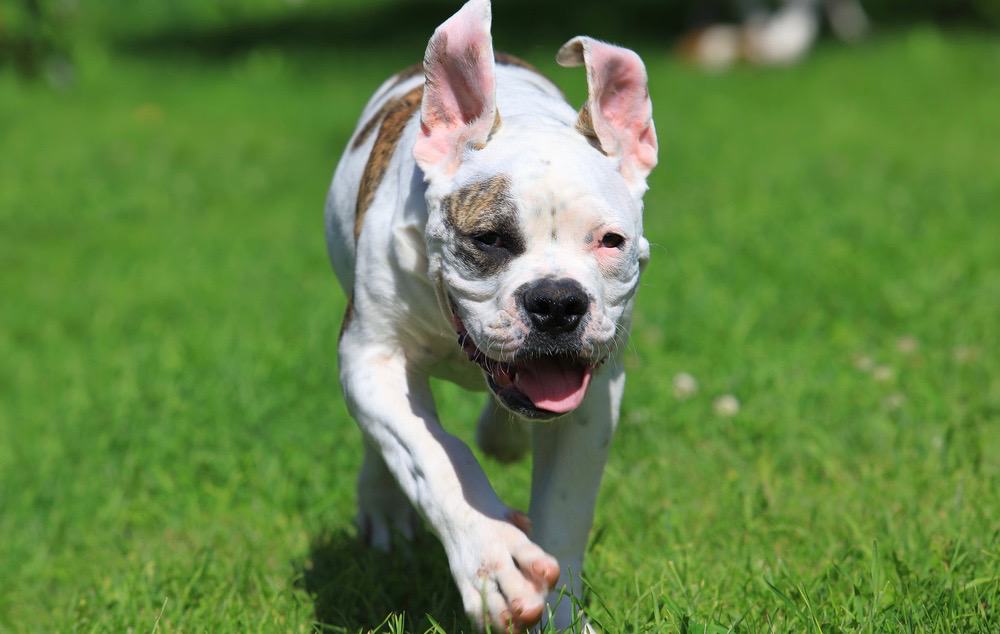 Some recommended activities include fetch, Frisbee, Jolly ball, tug-of-war, and dog toys that move independently. For mental stimulation, you can try puzzle toys, chew toys, and scenting and nose games.

Experienced dog owners warn that American bulldogs are strong-willed, so they can be challenging to train. To be able to train an American Bulldog, you need to be firmly in charge.

Your dog should be in no doubt as to who is the leader, otherwise you won’t be able to train your dog.

When you have established that you are in charge, be consistent and firm in your training. Always use positive reinforcement to train your dog.

A small treat is appropriate. These dogs don’t respond well to punishment and harsh treatment. If you know that you are not very patient, it might be better to consider another breed.

Part of keeping your dog healthy is taking it for regular checkups. Most of the vet visits will take place in the first year of your dog’s life.

Until your dog is four months old, you’ll need to take it for vaccines every three to four weeks. During these visits, it will get a shot for rabies, distemper-parvo, and other diseases.

The vet will also examine your puppy to make sure it’s developing correctly. You need to take your puppy to the vet again when it’s six months old – at this time, your dog will be spayed or neutered. 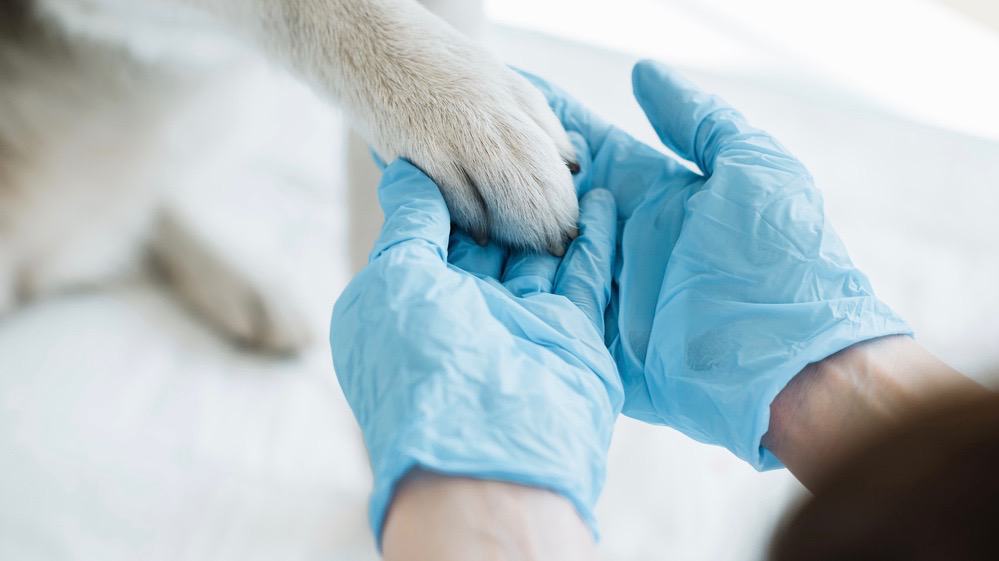 After the first year of life, you only need to take your dog for a check-up once a year. If your dog shows any early signs of a hereditary disease, the vet will diagnose it and start treating it immediately.

For older dogs, it’s best to take them to the vet at least twice a year. At this stage, your vet will perform blood tests to check your dog’s kidney and liver functions, and general health.

Carrying extra pounds may cause your American bulldog’s lifespan to be shortened. Research that looked at data of more than 50.000 dogs across the twelve most popular breeds has found that overweight dogs live shorter lives than normal-weight dogs.

They live about two-and-a-half years less. If you consider that these dogs only live 10 – 15 years, 2.5 years is a big chunk of life they are missing out on.

Other research has found that overweight or obese dogs have a higher risk of chronic diseases such as heart disease, high blood pressure, skeletal problems, diabetes and certain types of cancer.

Also, an overweight dog stands a good chance of developing hip dysplasia later in life, which is a crippling and painful condition that negatively impacts a dog’s quality of life.

To extend your dog’s life as much as possible, keep track of your dog’s weight and see that he gets regular exercise. Also, limit those treats between meals.

Do Mixed American Bulldogs Live Longer Than Purebred Ones? 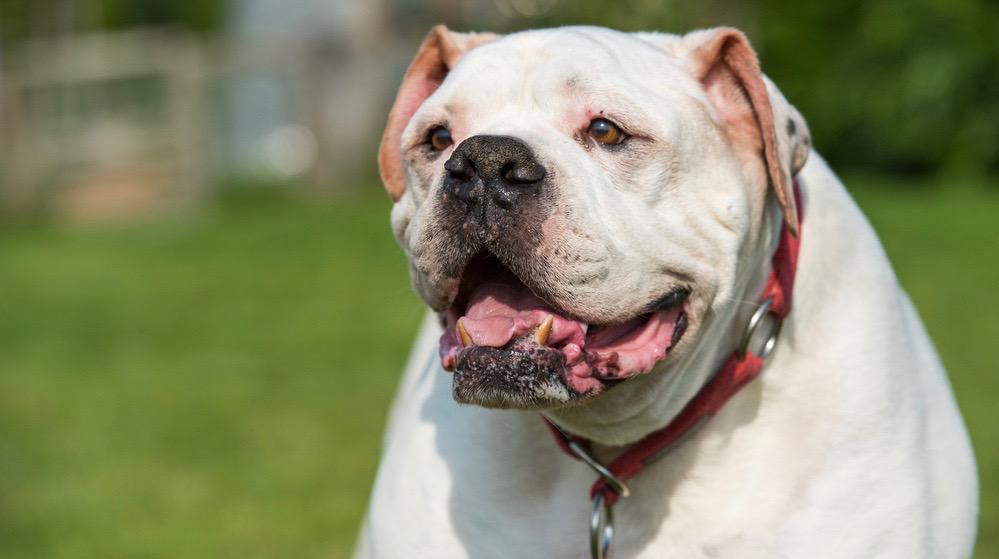 A dog’s size is more indicative of lifespan than whether is purebred or not. Small dogs have a longer average lifespan of 14.95 years than giant dogs that live on average for 11.11 years. Medium-size dogs also live longer than large dogs.

Although some research indicates that spaying and neutering can promote American Bulldog life expectancy, recent research has also found that sterilization leaves dogs at the risk of joint disorders, cancers, and incontinence.

Spaying and neutering have advantages, but there are also disadvantages, including the possibility of autoimmune diseases and cancer. Especially large dogs should not be spayed or neutered at a young age because of the risk of bone cancer.

Sterilization effectively removes the dog’s natural hormones for the rest of its life, which can lead to some serious health conditions.

Hormone-sparing sterilization is a better option. It preserves life-enhancing hormones while controlling the dog population.

American Bulldog Common Health Issues That Can Affect Their Lifespan

American Bulldogs are generally a healthy breed. The most common health issues for this breed are:

Hypothyroidism – a lack of thyroid hormones.

Ichthyosis – a genetic skin disease that can show up in the first few weeks of a dog’s life.

As a breed, American Bulldogs are at a high risk of developing bone cancer and Neuronal Ceroid Lipofuscinosis (NCL). NCL is a nervous system disorder that is a genetic illness common to some American bulldog lines.

American bulldogs are strong, high-energy dogs that need a lot of exercise and love to be outside. But as important as daily outdoor activity is for this breed, American bulldogs cannot be left outdoors indefinitely.

This is because they are no longer bred to be working dogs, and besides, these dogs have a short snout that makes breathing in hot or very cold weather difficult.

American bulldogs are both indoor and outdoor dogs. They love being outside and enjoy exercise, but they also love being in the home with their family in their favorite spot.

The American Bulldog is a pure bulldog breed, while the American Pit Bull Terrier is a cross between a bulldog and a terrier.

The American bulldog is a healthy breed that can live up to 15 years. This is a loyal family dog that will immediately alert you to strangers, but you must use a firm hand and start socializing it early to familiarize it with people and other pets.

These dogs need a large backyard and plenty of daily exercise. Entertain your dog with high-intensity games and let it accompany you on long walks. Your American bulldog won’t be interested in other dogs and will definitely chase cats.

To help your dog to live a long and healthy life, socialize and train it well, let it have enough daily exercise, and feed it top-quality dog food.