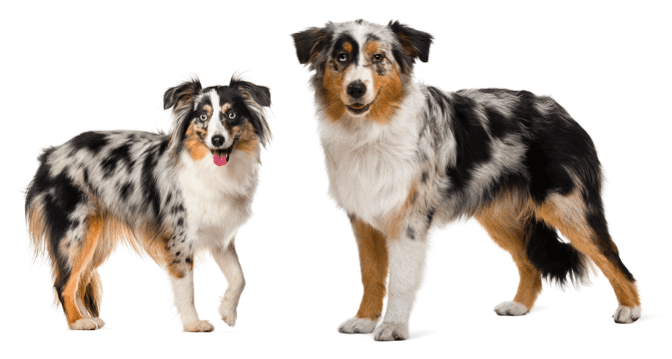 Both dogs are similar in appearance, but each has their breed standards and characteristics. The Mini Aussie resulted from the deliberate breeding for smaller Australian Shepherds. 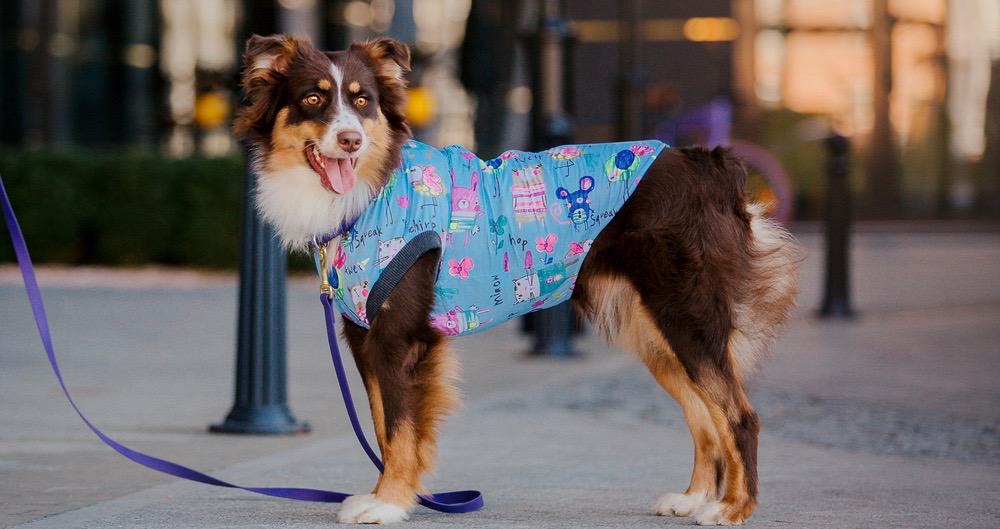 The goal of breeding this breed was to keep them small while retaining the active character and genetic intelligence of the Australian Shepherd.

In 1983, this breed was named Miniature Australian Shepherd and registered by the National Stock Dog Registry. But today the breed is popularly known as Mini American Shepherd.

In the 1990s, this breed became popular nationwide and was promoted by most clubs. The Mini Aussie was listed among the rare breeds and registered by most dog clubs which made them more desirable.

In the past, Mini Aussies were used for herding smaller stocks such as sheep and goats. Their small size, loyalty, and intelligence made them a favorite for most pet owners as they could be kept as household pets.

Also, the Mini Aussie has been listed in the herding group of the American Kennel Club.

The Standard Australian Shepherd originated from Spain and was used by the Basque shepherds as working dogs, but they were developed mainly in the United States.

Towards the end of the 19th century, the shepherds who migrated to Australia took the Aussies with them. They were then taken to America and given the name Australian Shepherd.

However, other people believe that the Australian Shepherd was taken to the United States by European immigrants. The ancestry of this breed is a mystery, but the dogs taken from Spain to Australia were bred with the Australian working dogs.

This breed earned a reputation because of their devotion and high intelligence in the work environment.

In the mid-1980s, the Australian Shepherd was imported to the UK by Mr. and Mrs. Jueckstock and has become popular as family pets, working, and companion dogs.

In recent years, they have been trained as rescue dogs, guide dogs for blind search, and helpers for handicapped people.

Most Aussies are also used as therapy dogs in hospitals and nursing homes which shows how intelligent and versatile this breed is. 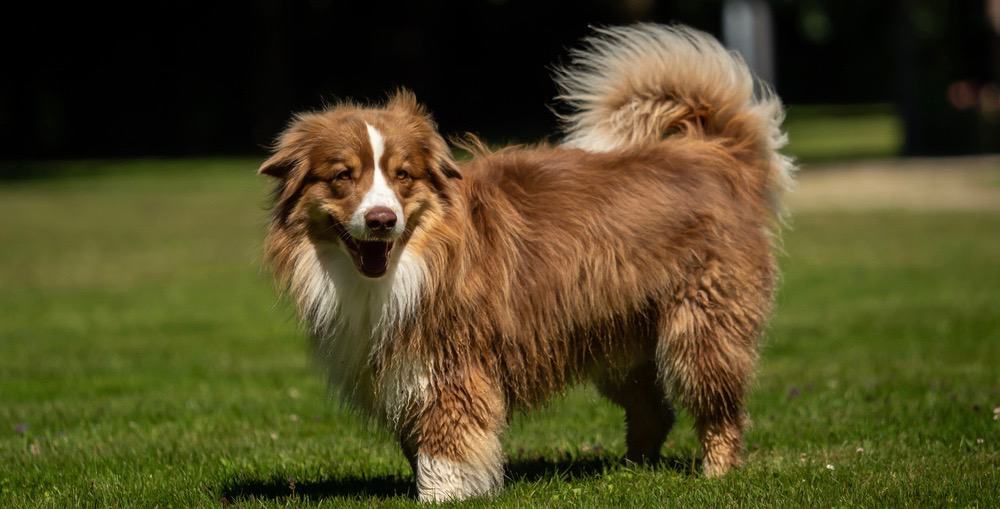 Generally, the height of a full size male Mini Australian Shepherd is between 14 and 18 inches while that of their female counterparts is between 13 and 17 inches. The weight of this breed at full size ranges from 20 to 40 pounds depending on their diet and age.

The coat of the Mini Aussie is medium length and is decked with a variety of colors that come in blue, red merle, red, black tricolor, or a complete tan plus white markings. They tend to have a coarse double coat that requires brushing an average of twice weekly. However due to the Mini Aussies double coat they tend to only shed frequently during their shedding season. The Mini Aussies shedding season happened twice a year, once in the spring and again in the fall.  If the hair around the ears and eyes is white, then they are not considered as Mini Aussies.

The hair can be slightly wavy or straight with a bit of feathering towards the back half of the legs. The hair in the head, forelegs, and outside the ears is a bit shorter compared to the entire coat. The length of the forequarters is like that of the hindquarters.

The skull’s top section is flat with a clean cut. The feet are oval and compact, and the lips do not hang over the lower jaw. 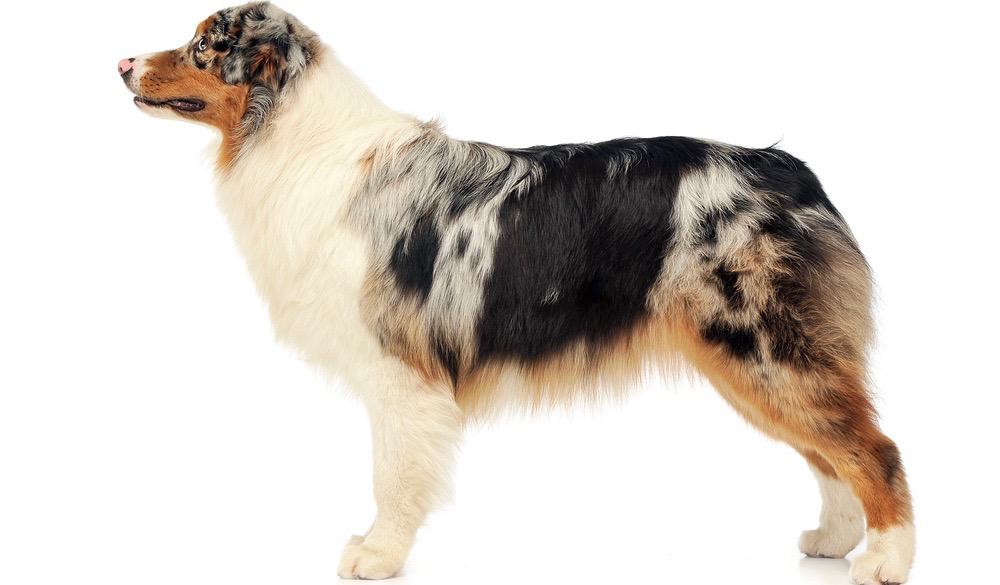 On average, the height of female Standard Australian Shepherd is between 18 and 20 inches while that of their male counterparts is 20 to 22 inches. The weight of a female Aussie is between 30 to 44 pounds while male Aussies weigh between 50 and 64 pounds.

The Standard Aussie is a nicely balanced and well-proportioned dog that is slightly longer than they are tall. They are muscular and medium-sized with an alert and keen look.

There is a clear difference between the male and female Aussie, and both have defined physical traits.

Their head is well-proportioned with their body and is slightly rounded as well as clean cut. Their eyes are amber, brown, or blue with marbling or flecks in them depending on the color of the dog’s coat and are almond-shaped.

The ears are set high on the head and triangular with rounded tips. They have a strong jawline, and their upper teeth overlap neatly with their lower teeth.

Their neck is moderately long, and their body is muscular and strong with a deep chest and level topline.

The shoulder blades are long and flat, and their legs are strong and straight. Their feet are compact and oval with well-padded pads and arched toes. Their tail has slight feathering and is medium in length.

The Miniature Australian Shepherd is an active and friendly dog that loves playing. They are affectionate and loyal and get along well with active families and children. They are somewhat protective and attentive, but they aim to please their owners.

Mini Aussies have plenty of physical and mental energy so they need a lot of mental stimulation and daily exercise to prevent them from the sort of any behavior that can be problematic.

Most people forget that they have the same drive and needs as their bigger shepherd cousins because of their compact size.

If you want your Mini Aussie to stay well-behaved and happy, do not ignore their activity requirements. Engage their minds with interactive playtimes and puzzle toys while providing plenty of exercises to ensure that your puppy lives happy and long.

They love to spend time socializing with their family, so they can develop separation anxiety if they are left alone for longer periods.

Generally, they are not aggressive with people but tend to be apprehensive around strangers. Therefore, you should socialize them as young as possible. 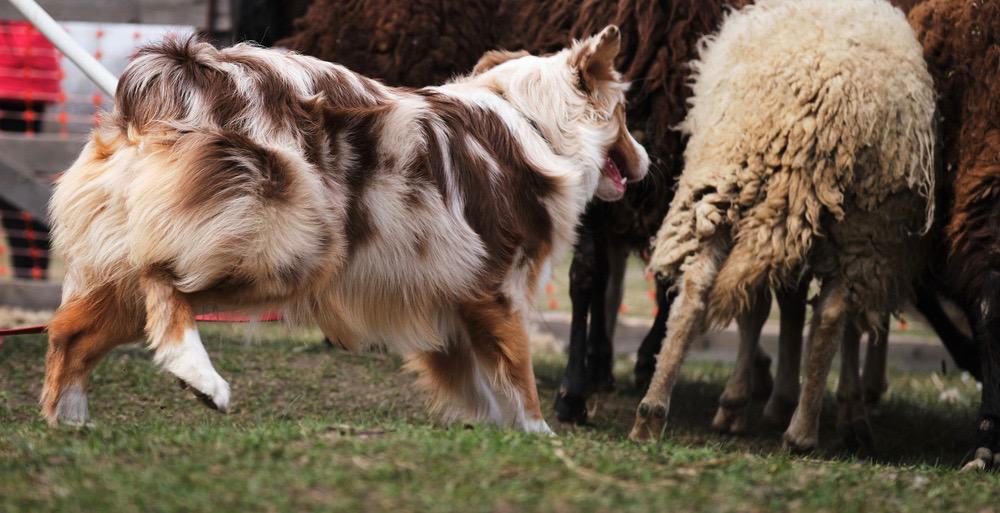 Since the Australian Shepherd was bred to work, their instinct and intelligence to protect and guard is strong even in a home environment.

They have high amounts of stamina and energy meaning that if you lead a sedentary lifestyle, this breed is not for you. However, if you spend most of your time outdoors, this is the perfect breed for you.

Since they are high-energy dogs, Aussies need to stay busy otherwise boredom can make them develop serious behavioral issues. They are known for their attentive and loyal nature and are highly prized as herding and working dogs.

They have even and calm dispositions and can be reserved when meeting new people. Typically, it takes time for them to get used to strangers.

Aussies can be demanding as they do not like being left alone. Once they form a bond with you, they will follow you everywhere.

Aussies are extremely territorial and protect everything in their environment which can get out of hand if they are not trained properly.

Mini Australian Shepherd’s require at least one hour of exercise daily because of their energetic nature which can be a combination of long walks and outdoor playtime. You can split the exercise into two sessions, 30 minutes brisk walk in the morning and another one in the evening.

Mini Australian Shepherd puppies benefit from early obedience training because they strive to please their owners. However, it can take a lot of time to train them to perfection.

You should start training your puppy when they are young, and it should be a team-building effort between you and them. Note that they will be discouraged if they notice you seem distant, angry, or irritable during the sessions.

Training Mini Aussie on agility, herding, and flyball will help them use the extra energy that they have.

To help them learn easily and fast, praise and reward them with treats and good words of affirmation. You also need to be a mentor and friend to them so that they know you will support them. 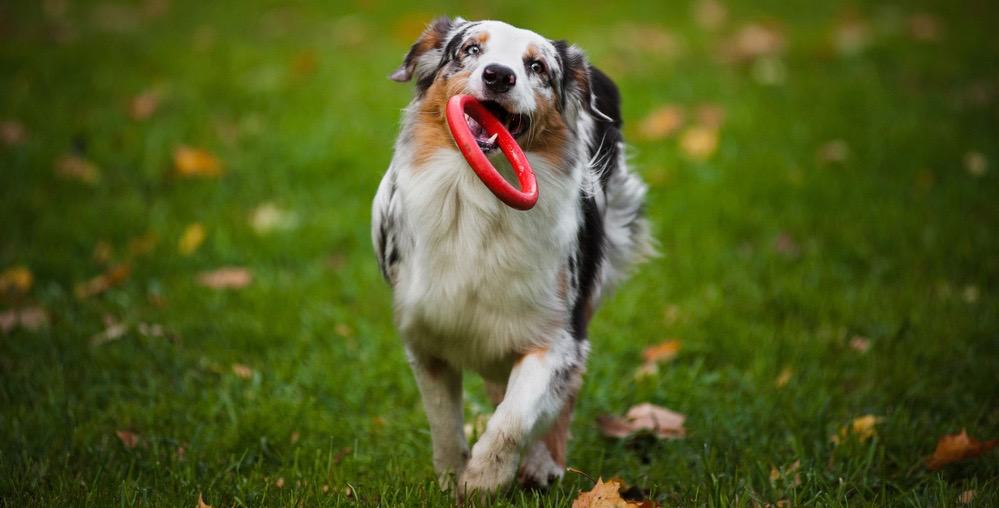 Being high-energy dogs, Aussies need plenty of exercises and mental stimulation to keep them busy and happy. Aussies are happy when they are given something to do and if left alone for a period, they can develop destructive behavior.

Australian Shepherds are known for their herding abilities, so they excel in sporting activities such as flyball and competitive obedience agility.

Once you take your Aussie home, it is important that you train them on and lay down the ground rules, and because they are intelligent dogs, they will easily understand what acceptable behavior is and what is not.

The first commands you can teach them can include sit, come, heel, stay, leave it, quiet, bed, and down.

When Aussies are not given the right amount of exercise, they can develop nervous characters which can make some dogs unstable.

Mini Australian Shepherds can have a good and long life depending on how they are groomed and taken care of. Their life also depends on any underlying health ailments and nutrition diet.

This breed is known to have detrimental genetic issues as well as different variations of chronic diseases.

Generally, Mini Aussies are a healthy breed and do not retain genetic disorders in their parents when bred by responsible breeders. Therefore, you should find a Mini Aussie from a reputable breeder.

Regular visits to the vet and vaccinations will ensure that your Mini Aussie is always happy and healthy. Mini Aussies are also prone to various eye disorders such as blindness and vision issues.

Like other breeds, Australian Shepherds suffer from genetic health conditions that are worth knowing if you have decided to get one of these highly intelligent dogs.

Aussies are also prone to allergies which can be triggered by airborne pollens, certain foods, dust mites, flea and tick bites, environment, and chemicals in cleaning products.

Aussies can gain weight after being neutered or spayed, therefore, monitor the amount of exercise and daily caloric intake to ensure that they maintain a healthy weight.

Both dogs are friendly, loving, loyal, and create strong bonds with their owners and families. However, a Mini Aussie is a better choice if you have a smaller backyard or house.

But if you have a bigger space and love doing activities with your dog, then the Standard Australian Shepherd is a good option for you.

Both the Mini Aussie and Standard Aussie are intelligent dogs. Since they were bred as working dogs, they need to understand what they are told to do and be able to make decisions about herding animals.

As a result, they need lots of mental stimulation otherwise they will become destructive and unhappy. Challenge them with activities such as treat puzzles, herding games, and advanced training.

When given healthy and balanced meals as well as adequate physical activity, both dogs can live longer.

Mini Aussies have less volume of fur, require less space, and are more comfortable in an indoor space that is crowded or small.

On the other hand, Standard Aussies need more space and enjoy spending most of their time outdoors. They are great working dogs and perfect for herding large livestock.

However, both dogs require the same training and physical activity to ensure that they stay occupied. They are great pets to add to your family

Do your research before buying any of the dogs to ensure that you get a healthy one from a reputable breeder. Visiting your vet regularly will ensure that your dog stays healthy and live longer.