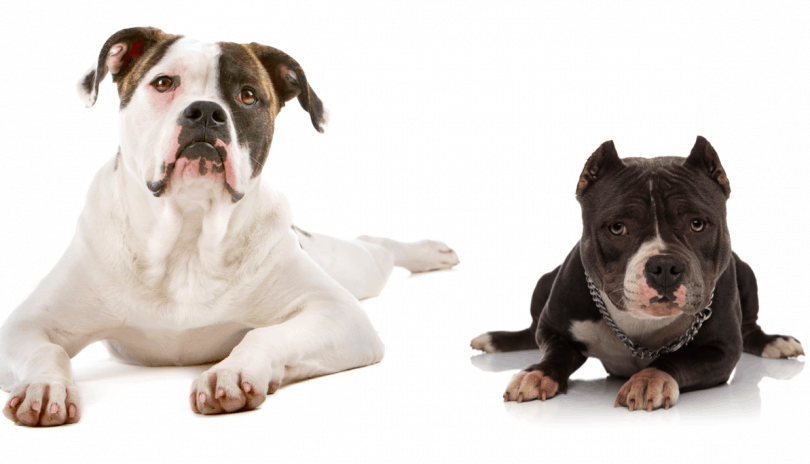 The American Bulldog is an old breed that dates back to the arrival of English immigrants to America, while the American Bully is a new breed developed in the United States.

These are large dogs with sturdy, muscular bodies. The American Bully in particular, can look rather fierce, so many people think that they are aggressive dogs. But nothing could be further from the truth. 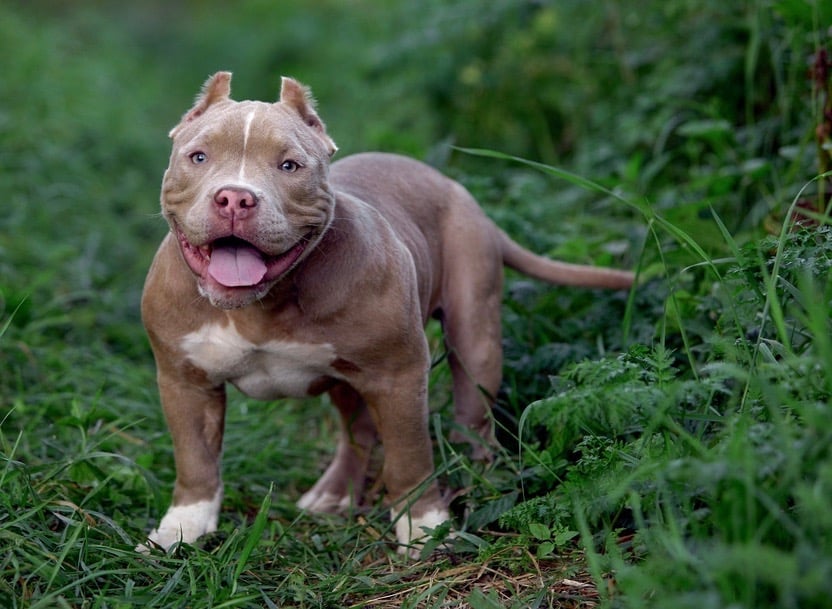 This breed is often confused with Pitbulls, but they are not the same breeds. While American bullies do come from pit bulls, they have been mixed with so many different breeds that they no longer are pit bulls.

In fact, the United Kennel Club recognized the American Bully as a separate breed on July 15, 2013.

The American Bully has been selectively bred to include the positive characteristics of the American Staffordshire Terrier, like loyalty, and traits like dog aggression and gameness were bred out because the dogs no longer required those traits. The purpose of the breeding was to develop a companion dog with no aggression. 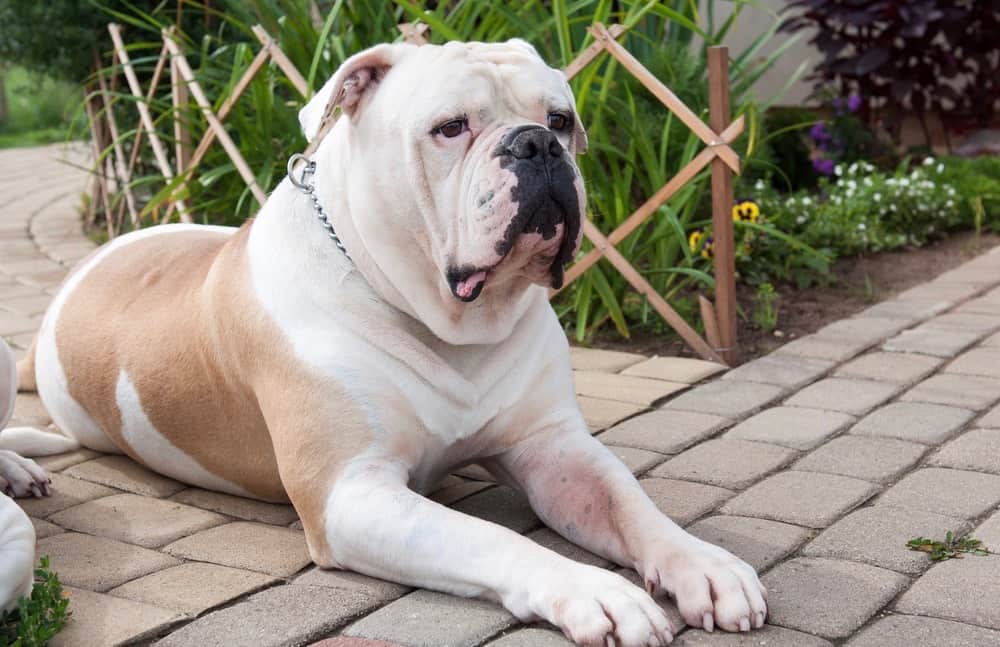 The American Bulldog stems from the now-extinct Old English Bulldog, which came to America with immigrants arriving from England.

The dogs arrived in America at the start of the 17th century to help farmers guard livestock and property. The dogs were especially good at catching wild cattle and pigs on farms.

The breed narrowly escaped extinction. The only dogs left after World War II were those left on farms in the rural South.

Credit is given to John D. Johnson from Summerville, Georgia who saved the breed from extinction. He went around the rural South and located healthy dogs he could breed with and succeeded in bringing the breed back from dying out completely.

At some point, he was joined in his breeding efforts by Alan Scott who is also recognized as playing an important role in saving the breed. 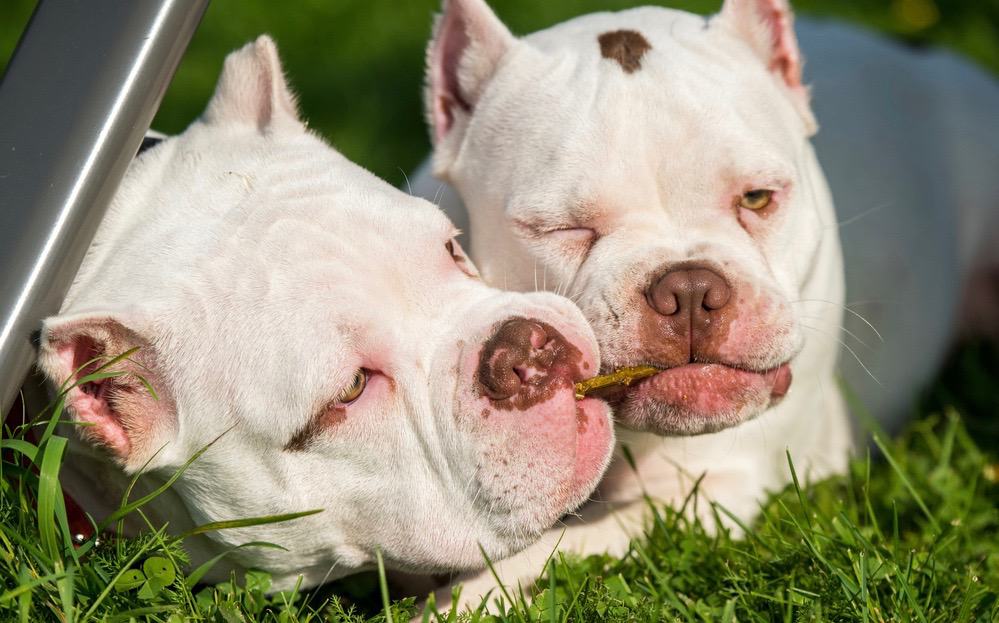 This is a really powerful-looking dog. It may have been bred as a companion dog, but it certainly doesn’t look like your regular dog friend.

These dogs have boxy heads with short muzzles, huge chests and very heavy-boned, muscular bodies. Many of them look bred to the extreme.

The American Bully comes in four recognized sizes: Standard, Pocket, Extra Large, and Classic. The different classifications mainly pertain to a difference in size, with the Pocket being the smallest, the Standard a bit bigger, and the XL the largest.

The Classic is differentiated by its built. These dogs are the same height as the Standard, but they have narrower bodies and are not so muscular.

The American Bully has a short, smooth coat that comes in many colors and markings. 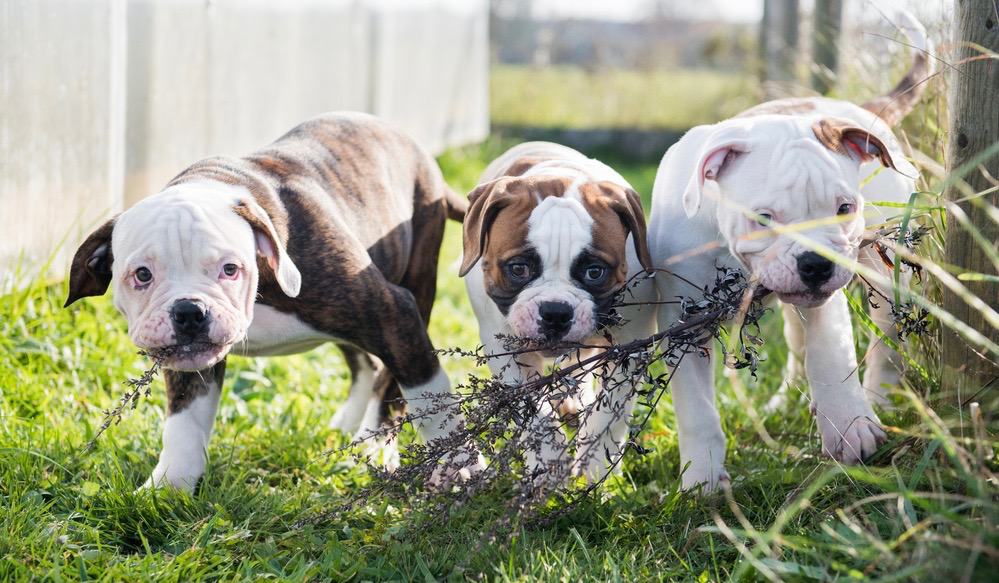 The American Bulldog is a sturdy and muscular dog. They can weigh up to 120 pounds and stand as high as 28 inches. This is a powerful breed with a large head and strong, square jaws.

Their bodies are very muscular and they possess a broad, and impressive chest that makes them appear very powerful.

These days there are different types of American Bulldogs, so they are no longer only white. They come with different colored coats that can be multiple colors with many markings.

Their coats are short and tight. They also come with different ‘style’ ears from hanging or cropped to semi-prick and rose.

The American Bully may appear fearsome but, in reality, this a gentle and friendly dog that makes an excellent family friend and companion. These dogs were bred to be loyal and to have no aggression. In fact, they seldom show aggression toward humans.

The United Kennel Club describes these dogs as confident with a zest and exuberance for life. A great trait of this breed is its stability – it never gets jumpy or nervous.

The American Bully is not a fearful or suspicious dog. In fact, this dog will remember people that she has met before and will always act friendly toward them. Toward its family, the dog will always be gentle and affectionate.

American Bulldogs are loyal family dogs that protect their family against strangers. They are friendly and affectionate, but not toward strangers. This trait makes them excellent watchdogs.

Because they are loyal and protective by nature, they should be socialized to other dogs and humans from an early age. Fortunately, American Bulldogs are highly intelligent and supremely trainable, so this should not be a problem.

The American Bulldog loves play and exercise. They like to be active and need a large backyard to roam around in. They do not do well with apartment living.

The American Bully is highly intelligent and learns quickly with positive reinforcement and a firm, patient owner. These dogs love to please their owners, which makes training them easy.

You can teach your American Bully all the basic commands plus advanced commands like playing dead.

A healthy American Bully needs daily exercise. Besides a walk in the neighborhood or a jog in the park, your dog will also enjoy agility. Agility combines training, exercise and obedience, all things these dogs excel at.

Obedience is a trait that American Bullies is known for. They excel in shows and can be trained to work as service dogs.

By developing obedience early on, you’ll be rewarded with a reliable, well-behaved dog that understands you’re the one in charge. 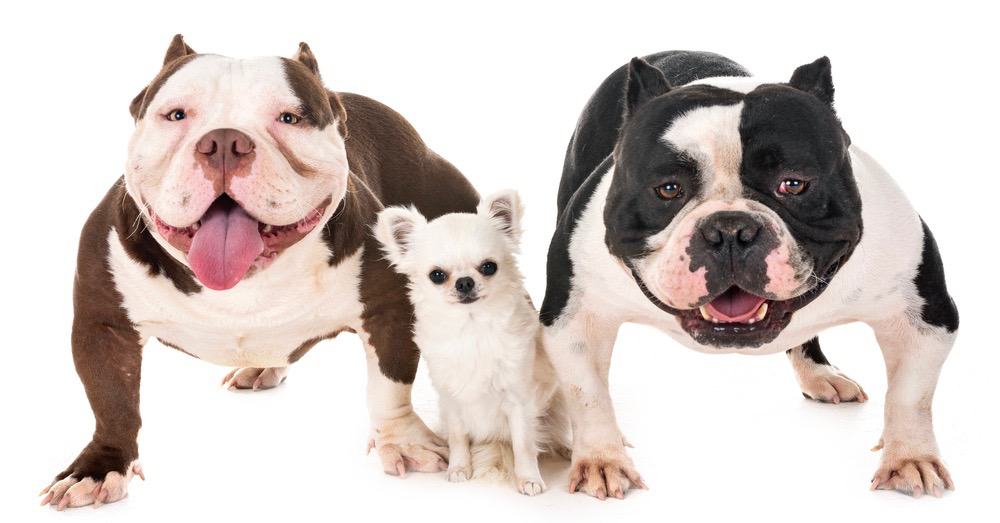 The American Bulldog is an energetic and playful dog that needs a lot of exercise. They need daily exercise of at least 30-40 minutes. This can include walking, running, tug-of-war, and agility.

American Bulldogs need owners who can be patient and consistent with training. Socialization training is important for these dogs as they are very loyal and protective and therefore need to be introduced to other humans and pets from an early age.

American Bulldogs are strong-willed and need a firm hand when being trained. They like to have their own way, so you need to take charge and be very consistent when you train your dog. Always use positive reinforcement when training your dog. 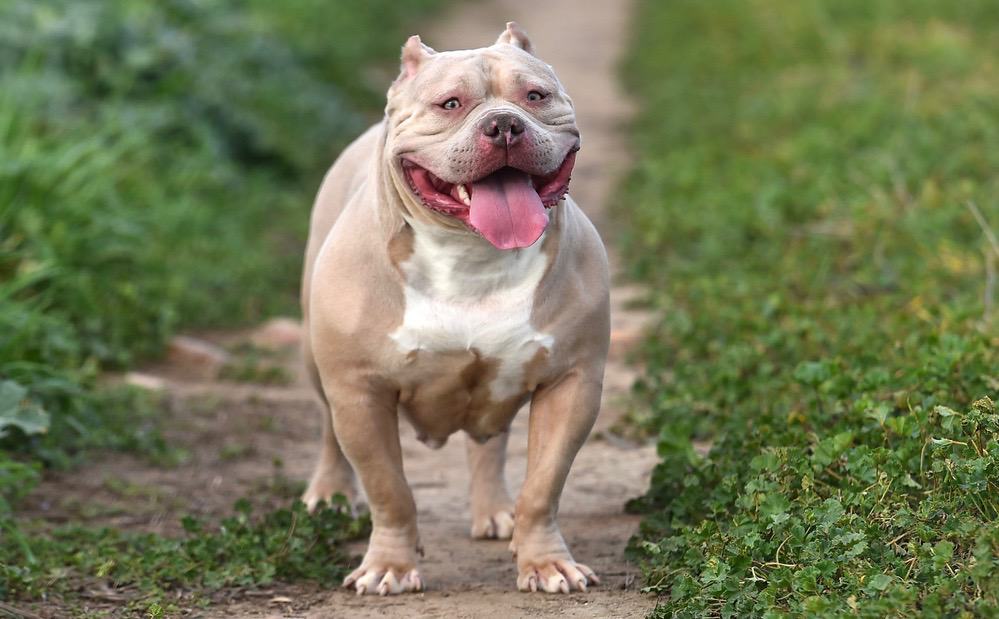 Like most bully-type dogs, American Bullies suffer from four main health problems, most of which are also common to other dog breeds. These include Hip Dysplasia, Congenital heart disease, a number of skin conditions, and eye problems.

Hip dysplasia is an abnormal development of the hip joint that causes a lot of pain and eventually leads to strained mobility or complete lameness. Congenital heart failure is a condition where the heart becomes enlarged and this causes fluids to be released throughout the body.

These dogs also suffer from some skin conditions. Demodectic mange is common among most breeds and can be seen by the poor condition of the dog’s coat.

This condition is caused by a parasite and leads to hair loss and scabs on the skin. Ichthyosis is another skin condition that afflicts dogs. It causes thickening and peeling of the paw pads.

Progressive Retinal Atrophy is an eye disease that causes a dog to gradually lose its eyesight. It’s incurable and the dog can go completely blind.

The American Bulldog is generally a healthy breed that can live up to 16 years. These dogs can have a tendency to develop cataracts, mange, or hypothyroidism. If they are allowed to put on too much weight, they may develop hip or elbow dysplasia.

Some common genetic health issues associated with the breed include NCL (a group of progressive degenerative diseases of the central nervous system}, disorders of the kidney and thyroid, cherry eye, entropion (an eyelid problem), and bone cancer.

The breed is moderately brachycephalic, which means they have shortened snouts. This may cause breathing problems for these dogs, especially in hot weather conditions. Don’t let your dog exert himself in hot weather and make sure he drinks enough water.

These dogs are strong and muscular and can become quite boisterous, but this is just playfulness. American Bulldogs can play rough when they get excited and injuries can happen, but they are not aggressive by nature.

The American Bully has been bred specially to not be aggressive so they are gentle and have a calm demeanor. They are not a threat to children, especially if they were socialized at an early age.

The American Bulldog is fiercely loyal to its family, which makes it protective of its home and the inhabitants. They make very fearless watchdogs and will stop intruders.

Which Breed Is More Intelligent

Obedience training is a breeze with this dog. They are eager to please, and with positive reinforcement, they learn to follow commands in no time. Their ability to learn and follow orders is evidenced by their outstanding performances in shows.

This is not to say that the American Bulldog is not intelligent. This breed is just more independent and will only obey a strong owner who is firm and in control.

Which Breed Is More Expensive?

During their lifetime, you will spend a fair amount on food for these dogs. They require specially formulated food for large dogs, which is costly and they eat a lot of it every day.

Add to that yearly check-ups, and you might end up spending in the region of $1,750 per year on your dog, which is about average for a large breed. That excludes possible medical treatments.

Which Breed Has A Longer Lifespan

The American Bulldog has a slightly longer lifespan of 14 – 16 years compared to the Bully that can live 10 – 13 years.

Both breeds are good with kids. The American Bully has been bred to be friendly and lack aggression. They are loving and gentle pets.

They are love to play with kids and are very tolerant with them, but you must supervise them as they are big, strong dogs that can easily push a child over unintentionally.

American Bulldogs have an affectionate nature and are very protective of their human family. They need early socialization training, and if that is done well, they are great with children.

These are large dogs and they can get very excited, so always watch them when they are playing with children to avoid accidents.

But there the differences end. These two breeds are both large dogs that need a lot of space and like to be active. They are both lovely family dogs, being loyal, easy-going, and affectionate.

Both breeds can be trained to be well-behaved members of the family. They are low-maintenance dogs that will return your love and attention with loyalty and affection.