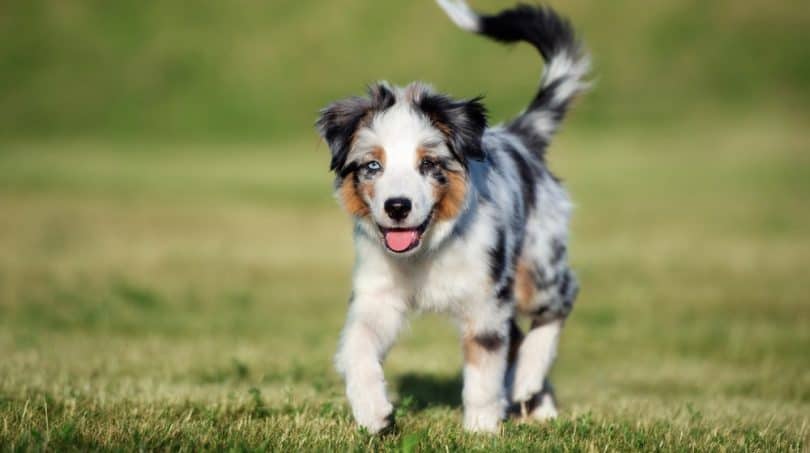 There are a lot of different factors that will affect your dog’s adult size, including his genetics and how big his parents were.

We have broken down when you can expect at every phase of growth from birth to adulthood to help you out.

When Is A Mini Australian Shepherd Fully Grown?

Because this is not a large dog breed, Mini Australian Shepherd’s reach their fully grown size at a younger age than larger breeds do.

Even if your Mini Australian Shepherd has reached his final size, remember that he is still a puppy and will still exhibit puppy-like behaviours. They still have other development to do that goes beyond their physical size.

When you are looking at a Mini Australian Shepherd growth chart in order to get a good idea about your dog’s size, there are several things to think about.

The first is what a weight chart is actually used for. You can use a weight chart to look at where your dog should be at in the future, but you can also use it to see whether your dog is staying on his growth curve.

If he is not staying within his weight group on the chart, you should check in with your vet to make sure all is well.

Looking at the growth chart, you will line up your puppy’s age in months with the average weight. If your puppy is below average or above average, you will want to keep that in mind when you are looking at weights in the future.

If your puppy is always below average, there is nothing to worry about, as long as it is consistent.

For example, if you know that the average weight for a Mini Australian Shepherd at 4 months old is 14 pounds and your puppy is 12 pounds, you can look back and see if he has always been below average for weight. 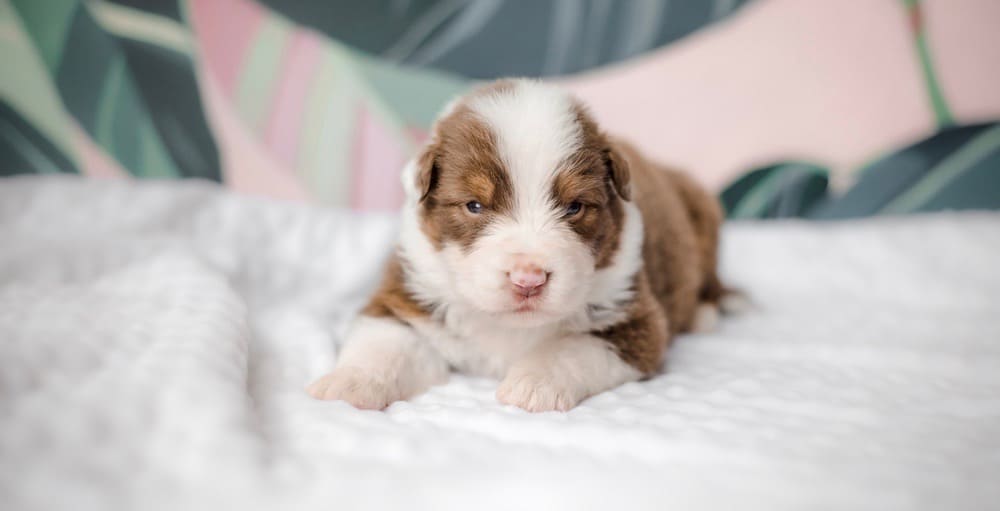 At birth, Mini Australian Shepherds are very small puppies. They will likely weigh just over half of a pound when they are born.

In the first two weeks, you can expect them to gain a little less than 2 pounds. They are entirely reliant on their mothers at this age for food and care, so you should not see any activity from them. They likely won’t get up to move around much until the 2 week mark.

Between 3 weeks and 12 weeks of age, you will see some enormous changes from your Mini Australian Shepherd. At 3 weeks old, your puppy might weigh somewhere around 3 pounds.

By 12 weeks old, your puppy will weigh somewhere around 12 pounds. The change has to do with their rapid growth and they will be off of their mother’s milk and onto puppy kibble. Their appetites might not be enormous yet, but that is coming soon.

By the time that your Mini Australian Shepherd puppy is 4 months old, you can expect him to weigh about 14 pounds. 9 months is generally when they hit their peak growth, so they will not gain much after that. 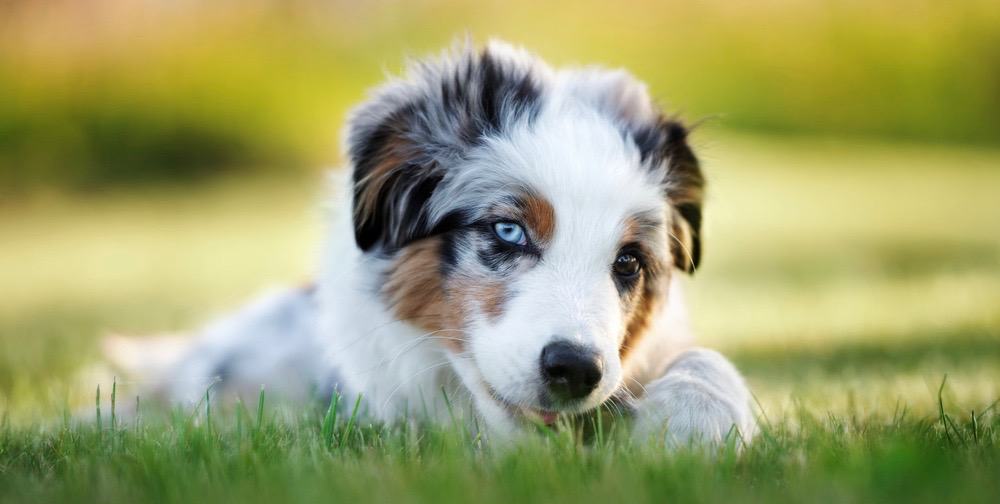 Your puppy might weight about 23 pounds when he is 9 months old, and all of his major growing has already happened. He should be down to 2 meals of kibble a day, but stick with puppy food.

As we mentioned above, your puppy is likely mostly done growing by the 9 month mark, but you might see some slight weight gain after that, up until about 18 months of age.

If that is the case, he might gain a pound a month until he stops growing, but it is unlikely that he will gain any more in height at this point. It is ok to switch your puppy to adult food at a year old.

It is not uncommon to see Mini Australian Shepherds who are much larger or smaller than that average.

You can get an idea of when he still stop growing by looking at his parents and see how large of Mini Australian Shepherds they are.

How Big Do Mini Australian Shepherds Get?

They are a small to medium breed, and smaller than their Australian Shepherd cousin. There is not a size difference between males and females of this breed.

Regardless, the weight between dogs can vary dramatically in this breed. One dog might weigh only 20 pounds, or even one that weighs 60 pounds.

To know where your dog will be, look at his paws to see how much growing he has to do. If you know how big his parents were that is a good clue as well, though you could also have a DNA test done.

Will Neutering/Spaying My Mini Australian Shepherd Affect His Growth?

Traditionally, when it came to spaying or neutering your dog, you would do it around the age of 6 months at the earliest.

This was because 6 months is the time when it is safer to do anaesthesia. But, in more recent years, there has been the question as to whether spaying or neutering will stunt a dog’s growth.

While spaying or neutering early will not affect the final size of your dog, it has been shown to be dangerous to the joint health of large breed dogs.

Since a Mini Australian Shepherd, this does not apply to them. Talk to your vet about the best time to have your dog spayed or neutered.

Just looking at their name, you should know already that the Mini Australian Shepherd is not a tall dog.

When you look at the growth chart for a Mini Australian Shepherd, you will see that the average height for a male is between 14 and 18 inches, while a female is between 13 and 17 inches. 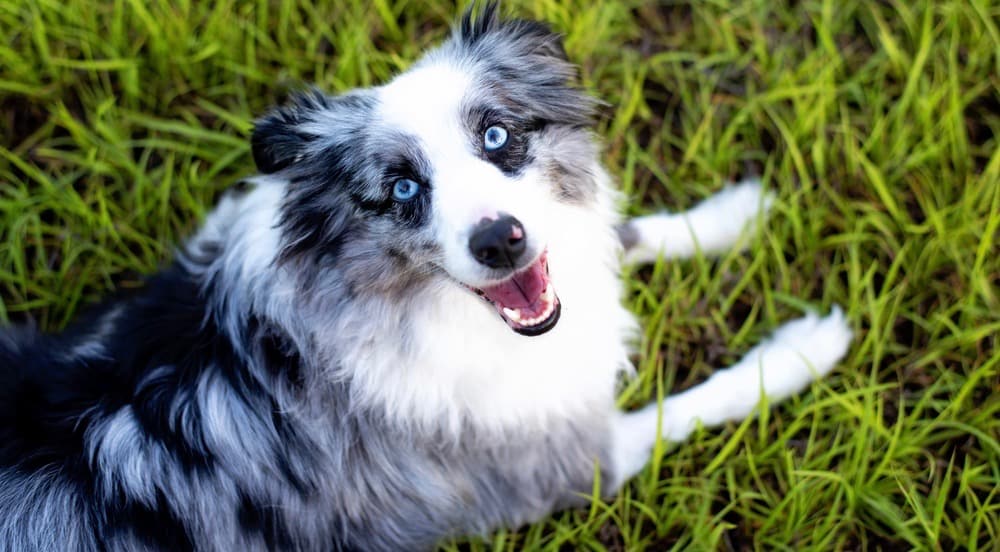 To measure a Mini Australian Shepherd, you will want to measure the dog while he is standing on all four legs. Then, you measure from the highest spot on his back to the ground.

There is still a lot of variety in this breed, so your dog might be smaller or taller than the average dog.

Meanwhile, the Australian Shepherd can weigh anywhere from 30 to 65 pounds and stand between 18 and 23 inches in height.

One of the biggest factors that affect the size of your Mini Australian Shepherd is genetics and gender. Looking at the dog’s parents, you will know about how big your dog will wind up being.

Since the breed has a lot of variety, genetics are a huge factor in determining how big of a Mini Australian Shepherd you will have.

Also, in general, female dogs are smaller than males, though there is not a huge difference in size with Mini Australian Shepherds. 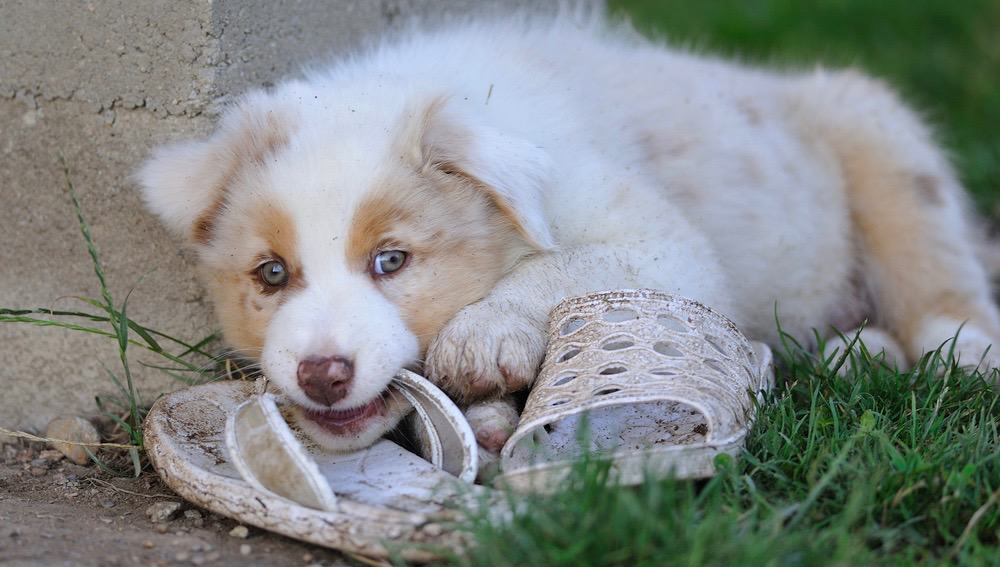 If your dog is being overfed, it will also affect his joints by putting too much pressure on the developing joint plates, potentially resulting in your dog having arthritis when he is older.

So it might not make him bigger or smaller, but it will affect his quality of life.

Overall, your dog’s activity level and health are big factors in how your dog is developing on the inside.

When a Mini Australian Shepherd becomes overweight due to a lack of physical activity, he is going to have a hard time losing the weight, potentially putting pressure on those developing growth plates.

Some dogs that have health conditions could also see those negatively impact your dog’s growth, but that is less common.

If you are concerned that your Mini Australian Shepherd does not have as healthy of a body as you would like him to, you can consult your dog’s Body Condition Score or BCS for guidance.

The BCS is how we can determine whether your dog is the right weight for his size based on appearance and feel. 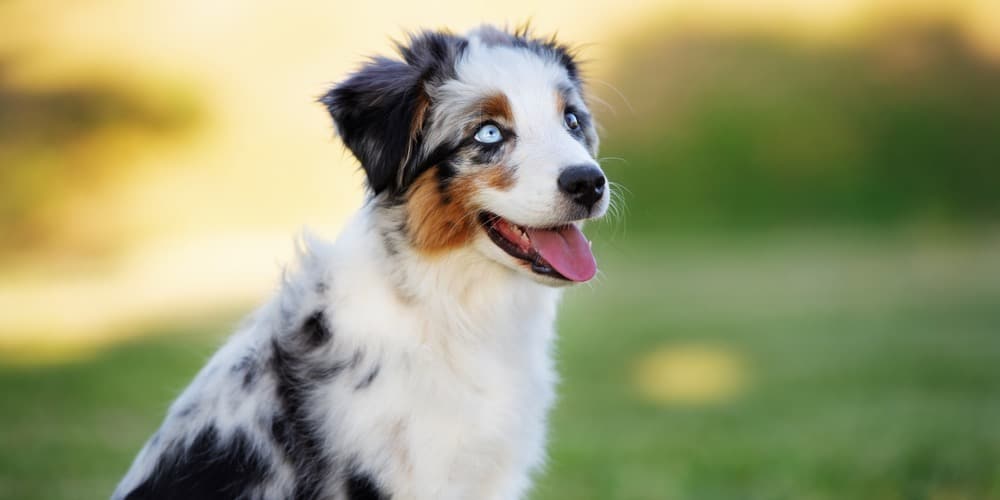 For a healthy BCS of 5, you should not be able to see your dog’s ribs, but should be able to feel them under his skin.

Given their long coats, it is harder to see ribs on the breed, so you will need to go off of feel. Additionally, you should be able to see your dog’s waist easily when looking over him.

What If My Mini Australian Shepherd Is Not The Right Weight

If you have compared your Mini Australian Shepherd weight chart to his size and consulted his BCS score and determined that your dog is not the right weight for his size, there are a few things that you can do.

If your dog seems like he is overweight, the first thing to do is look at the food that you are feeding him. How is his calorie intake?

If he is eating too much food, it is time to pare it back a little. Do not cut a lot of food out of his diet. That is not a healthy choice. You can also go for a healthier food option.

If your dog is underweight, double-check that you are not feeding your dog too little food. You could even increase his meals to three times a day or increase the quantities to help bring up his weight.

How Much Does It Cost To Own A Mini Australian Shepherd?

Before adopting a dog, it is a good idea to know what you are getting into. A Mini Australian Shepherd puppy is likely to cost anywhere from $400 to $1500, depending on where you are at and the genetics of the puppy.

It is safe to say that the average cost of a Mini Australian Shepherd is about $800.

In the first year, you are looking at somewhere around $2500 in expenses, between having them spayed or neutered, shots, vet visits, and food.

In the following years, it should cost around $1500 to keep your Mini Australian Shepherd as healthy as possible.

All dog breeds have tendencies toward developing certain genetic conditions and health problems. The Mini Australian Shepherd is no exception. Some common health issues you might see include:

Eye Disorders: One of the most common disorders that Mini Australian Shepherds face is eye disorders. These kinds of conditions include Iris Colobomas, which is a cleft in the iris of the eye, which can cause sensitivity and impairment. Juvenile cataracts cause a gradual loss of sight.

Orthopaedic Disorders: The second most common issues you will see are orthopaedic disorders, which include hip dysplasia.

This is a malformation of the hip joint where the joint doesn’t fit together properly. It will cause mobility issues as the dog ages. Luxating patella is another common condition that has to do with the knee joint popping out of place.

Allergies: Finally, Mini Australian Shepherds are prone to allergies. These are easily treated through food avoidance and medications. Your vet will be a huge help here.

This means making sure that your dog is staying on his growth curve, and giving him the right diet and exercise to maintain a healthy weight.

Always remember that if your pup does not seem to be growing correctly, you need to speak to your vet as soon as possible to look for causes as well as solutions to your concerns.