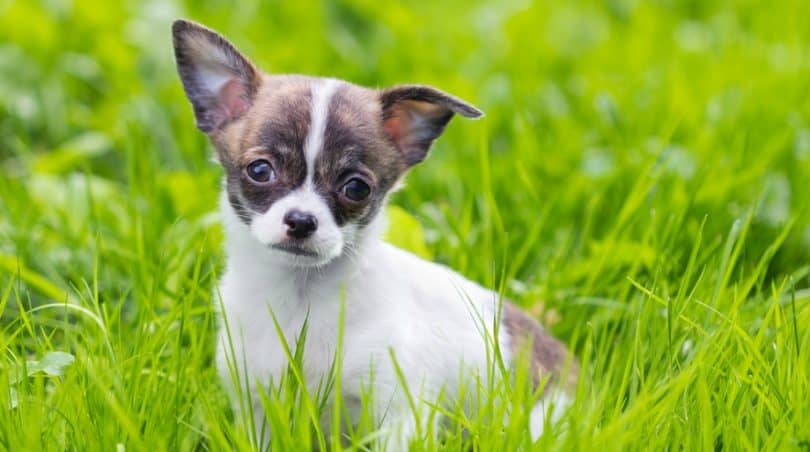 Chihuahuas are not only one of the most popular breeds of dogs to own, but they are the smallest breed recognized by the American Kennel Club.

If you have adopted a Chihuahua puppy or are considering adopting one, you will need to know everything about how they grow. And you might be also wondering when do Chihuahuas stop growing.

You can refer to a Chihuahua growth chart to get an idea of what you can expect, but there is a lot of other information to take into consideration as well. You will need to make sure your pup is growing at the right pace and is as healthy as possible. This is what you need to know.

When Do Chihuahuas Stop Growing 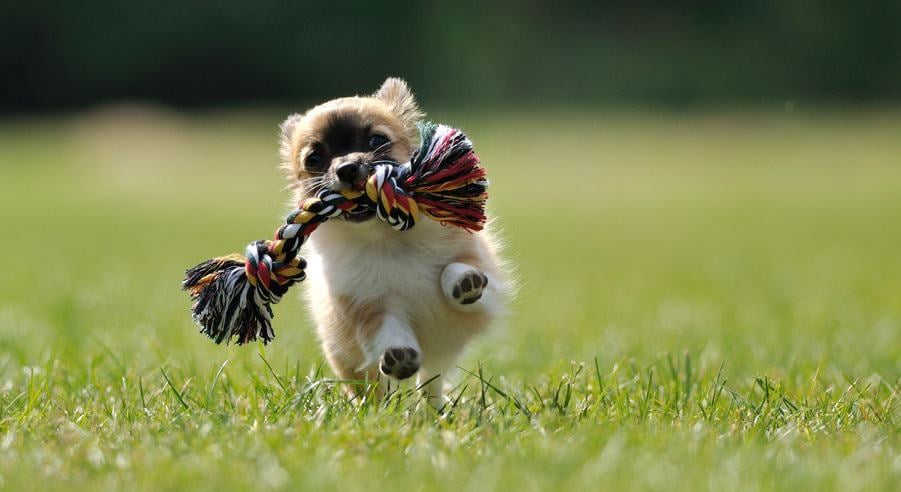 Since you should already know that Chihuahuas do not grow very large, you might wonder how you can tell when a Chihuahua has reached his/her ideal size. They will not make big leaps in growth like large breed dogs do, but they do grow steadily.

While your puppy is growing, he will be gaining a few ounces a week. He should be at his final size at around 20 weeks, or 5 months. He might gain a little more weight after that, but you should not expect your dog to get much bigger than he is, even though he’s still a puppy. 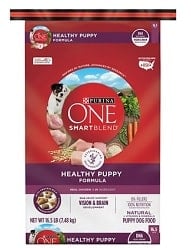 When you are looking at a Chihuahua’s weight chart, you will need to look at a couple of different categories. The weight of the dog should be listed horizontally with the age listed vertically. To figure out where your dog is on the Chihuahua growth chart, locate his age in weeks along the side first.

Your dog’s weight should align with the same column as he was at his previous weigh-in. For example, if your dog was 9 ounces at 2 weeks, you can expect him to weigh around 21 ounces by 8 weeks. If his weight is really different, then he has moved off of his growth curve and you should talk to your veterinarian about your pup’s growth and development.

Birth weight can be a good indication of final size in some cases, but that is not always the best tool of measurement. If your dog was born in a litter with several other puppies, some puppies receive more nutrition than others that can be made up for within the first few weeks after birth. If this is the case, your pup might not stay on his growth curve, but watch out for it either way.

Chihuahua Growth Chart – What To Expect

Since Chihuahuas are naturally small dogs, they do not weigh more than a few ounces when they are born. You can expect to see a rapid growth between birth and 2 weeks as your puppy will increase in size on a daily basis.

Your Chihuahua puppy will continue to grow rapidly between 3 weeks and 12 weeks. The first month is when your puppy will have the fastest growth rates. After that, your puppy should continue to grow steadily, but there will be periods where your pup might gain rapidly and then plateau for a period of time. There should be weight gain, however.

The growth of your puppy should slow down between 4 months and 9 months. Some Chihuahuas will stop growing during this period and simply continue to gain weight as they move to adulthood. Other Chihuahuas might not hit their full size until they are about a year old.

By this time, your puppy should have reached about his full size. They are not big and will stop growing at some point. Your puppy should still be hyperactive, but should be slightly calmer at this point than he would have been a few months before.

When Should I Have My Chihuahua Spayed Or Neutered

The general rules for neutering and spaying Chihuahuas are different than what you will find with other breeds. When it comes to spaying, earlier is better.

They are at a greater risk of cancer if they are left to fully mature, and they will mature much earlier than larger dogs will. For that reason, Chihuahuas can be spayed between 8 weeks and 3 months.

Typically Chihuahuas enter puberty between 4 and 7 months. For neutering your male pups, you can neuter them between 8 weeks and 6 months. Either way, 8 weeks is the absolute earliest you can go.

Even though Chihuahuas are small, they do have a round body shape. The roundness of their body is where they store their extra fat for insulation. Typically, Chihuahuas are high energy or even hyperactive and do not run the risk of obesity.

Your Chihuahua might not reach his final adult weight until around 18 months and he should still have a lean, slim appearance. You should not see your dog’s ribs, but they should be felt under the skin. While it is uncommon to have an overweight Chihuahua, you still need to be aware of sudden weight changes or a noticeable lack of energy.

If your dog is acting tired and sluggish and is still a younger dog, you should take your pup in for a check-up with the vet. 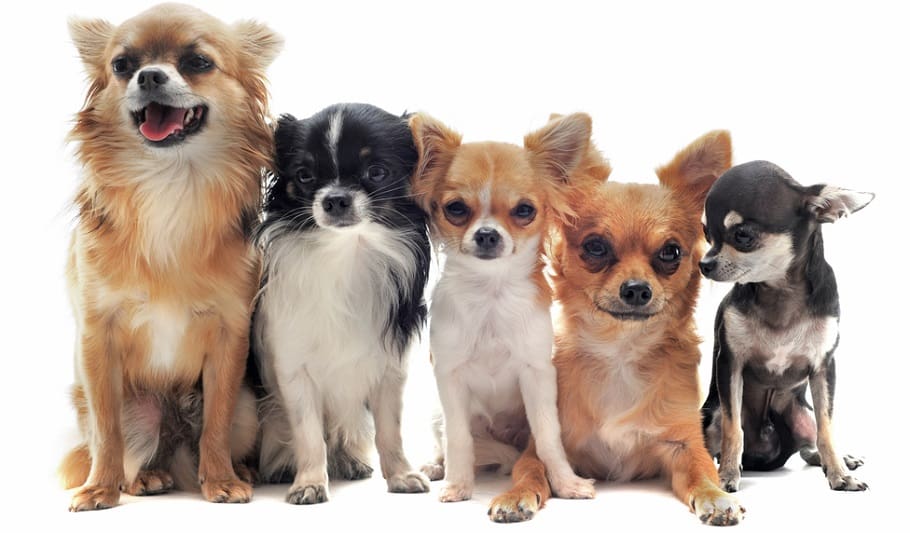 Genetics play a huge role in your Chihuahua’s growth. There are a few varieties of Chihuahuas and the size differences between a couple of pounds will really make a difference.

Look at your puppy’s parents to get an idea of how big he will be when he is fully grown. The breed itself has been bred to keep the dogs small, so that gene will continue to pass from generation to generation.

Nutrition is another factor that will affect your puppy’s growth. Your puppy should be offered food three times a day. The amount should be small, given the size of the dog, but calories still matter a great deal for growing bodies.

Your pup should be given a healthy puppy food that has enough fat and calories to fuel a high energy breed through puppyhood. Avoid giving your puppy people food, unless it is plain bites of meat.

Chihuahuas have a lot of energy and need a lot of exercise to keep them happy and healthy. They do not naturally have any major health issues. There are some diseases that could arise, but in general, Chihuahuas are healthy and have long lives.

They do have a tendency to shiver, but it is not based on body temperature. Chihuahuas are happiest when being exercised, but should never be left to live outside.

How Long Are Chihuahuas Pregnant?

Chihuahuas are pregnant the same amount of time as other dogs, which is about 63 days on average, or 9 weeks. The date is measured from the dog’s ovulation period until the puppy is born. They have three trimesters, like humans, but each trimester is about 21 days.

Chihuahuas can become pregnant by much larger dogs as well, which could be extremely dangerous to the Chihuahua. To prevent your female Chihuahua from getting pregnant, keep her close while she is in heat or have her spayed.

Your dog will be visibly pregnant 2-3 weeks after conception, but it will take up to 45 days to see the puppies on an x-ray.

How Many Puppies Do Chihuahuas Have? 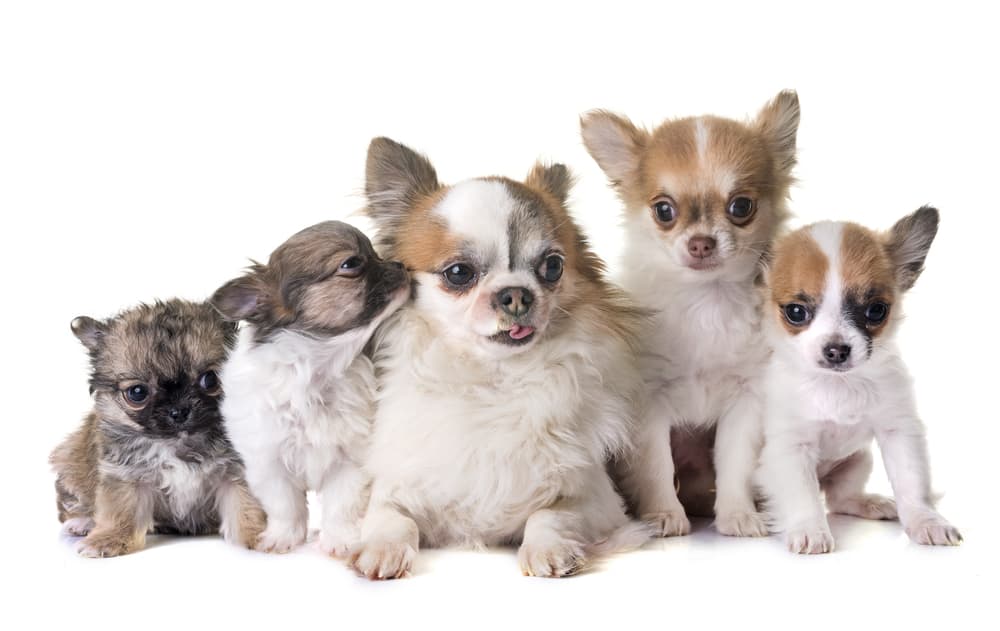 Since Chihuahuas are not large dogs, it is unlikely for them to have large litters of puppies. On average, a Chihuahua litter is made up of 1 to 3 puppies, but it is possible to have up to 6 puppies, depending on the dog.

Typically, the smaller the dog, the fewer puppies the dog will have at a time. This is also why it is important to not have your female Chihuahua breed with something like a lab, since labs usually have more puppies and they would be too large for her body. It is also important to ensure that your dog does not get pregnant during her first heat cycle.

What If My Chihuahua Is Not The Right Weight

In general, Chihuahuas do not have a tendency to gain weight as you can see from the Chihuahua weight chart above. They are small dogs and are active enough in general to ward off obesity. Regardless, if your dog seems too large based on the Chihuahua growth chart, it might be better to review your dog’s health. This will include what your dog eats and the amount of exercise that he receives.

If your dog seems like he is too low on the growth chart, you might want to slightly increase the amount of food that you give him to see if that is the reason. Otherwise, it is a good idea to have your dog looked at by the vet to rule out any underlying health issues.

The Chihuahua puppy weight chart is still just a guidance as well. The dog’s true size will depend on the specific dog. As long as your dog is growing well and looks healthy, you should not need to worry.

What Is The Life Expectancy Of Chihuahuas?

Luckily for Chihuahua owners, they have a longer life expectancy than large breed dogs. It is not uncommon for a Chihuahua to live up to 20 years, but you can expect your dog to live anywhere between 12 and 20 years as long as you take care.

Life expectancy is determined by the health of your dog and whether he has any underlying conditions that might decrease his lifespan. There is also the care that the dog has received and proper nutrition. Well-fed and well-exercised Chihuahuas have a much longer lifespan than dogs who are not taken care of.

How Much Does It Cost To Own A Chihuahua? 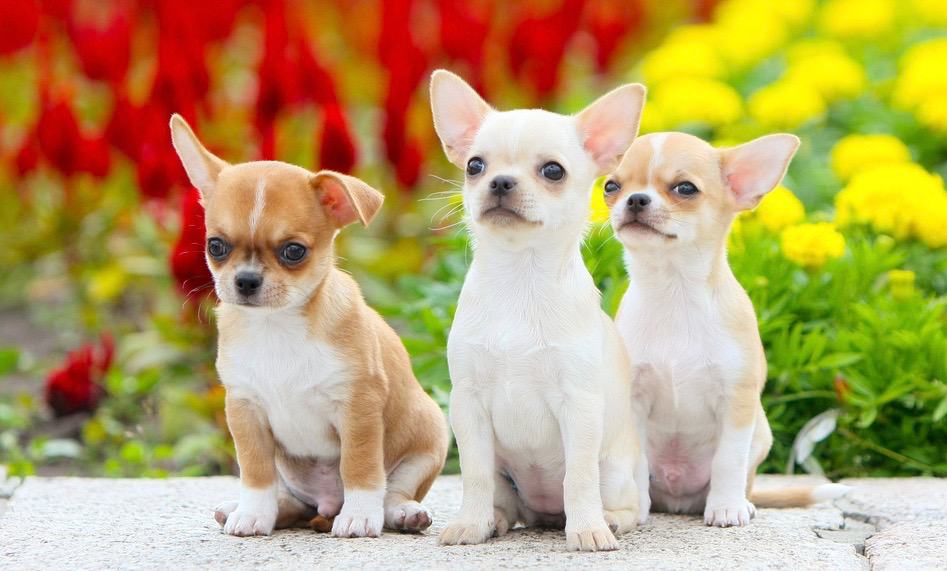 The amount that it costs to own a Chihuahua is based on a few factors. Because it is a common breed, you should be able to adopt one for under $1000. They can be found in shelters across North America for a couple of hundred dollars. Purebred Chihuahuas purchased from breeders are going to cost substantially more, so you need to think about whether having a purebred really matters to you.

Other fees will include food, which should not cost much for a small dog, training, and veterinary bills for annual and incidental checkups. You will also need to factor in the cost of dog license, which varies by location.

Thankfully, Chihuahuas in general do not have common health issues, but there is still a risk of some common genetic abnormalities that might appear. Low blood sugar is a common issue for smaller dogs in general, so regular feedings are essential.

Additionally, Chihuahuas run a risk for heart issues like heart murmurs or pulmonic stenosis. These would most likely not appear until the dog is older or if the dog is over-exercised. It might require a special diet and fitness schedule to keep your dog as healthy as possible.

There are also risks of hydrocephalus and open fontanel, both of which have to do with brain development. These dogs need extra care and to be protected from injuries to the head.

Finally, they do have a risk of patellar luxation, which is when the leg bones are not properly aligned. This is usually visible at birth. Sometimes it resolves itself and other times, surgery is required.