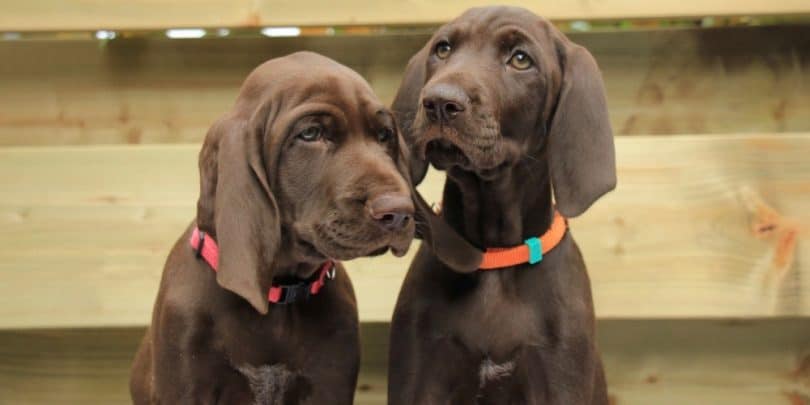 German shorthaired pointer dogs are an enthusiastic breed full of speed, power, agility, and endurance. They have an aristocratic look, and they have an excellent loyal personality. These dogs are great hunters of all types of game, and they require ample exercise.

They have a friendly personality and can be trained with the proper guidance. They are wonderful family companions, and they can run, swim, and participate in a variety of dog sports.

Their beautiful easy-care coat will come in handy when it’s time for grooming, but if you live in an apartment you may have a difficult time with them since small spaces are not ideal. These dogs enjoy themselves in open spaces where they can run around for exercise.

Caring for these dogs is not very complicated, but it’s important to monitor their growth. To this end, we’ve created a German Shorthaired Pointer Growth Chart.

At two years old, a German Shorthaired Pointer is said to be full-grown. Pointers usually stop physically growing at around 1.5 – 2 years old, but cognitive growth is normally done at about two years of age.

You can usually tell a lot about German Shorthaired pointer’s growth, physical limitations, hunting abilities, and cognitive development by their age.

As a dog owner, you should be aware of how many years it takes to get a fully grown dog and the developmental milestones that occur. You should also know what it takes to help them be as healthy and happy as possible.

The German Shorthaired Pointer weight chart gives an average size of your puppy’s weight. In some cases, the weight may be higher or lower than what is stated in the chart. In most instances, this is no reason to worry.

However, please keep in mind that if you find your German Shorthaired Pointer weight is drastically less than any of the numbers that appear on the chart, you should evaluate his health.

Your German Shorthaired Pointer may be too small and may have a greater chance of developing several health problems.

It’s important to know what age your pointer stops growing. Humans have BMI and growth charts for the same purpose. The pointers have healthy levels within which they should be staying. You should also be aware of the size of the dog you are caring for so that there will be no surprises when they are developing.

It doesn’t happen every day, but some German Shorthaired Pointers can grow to 75 pounds and be in perfect health. Just ensure that you always check with your veterinarian. Please use this chart as a guide but remember that it won’t be applicable to every case.

GSP Puppy Growth – What To Expect

German Shorthaired Pointers are born in a delicate state as they are can’t look after themselves. They depend on their mother for warmth comfort and nourishment.

Newborn puppies require an optimal temperature to survive, as they are prone to fever. They snuggle close to their mother, but they can’t walk yet because of their undeveloped muscles. The puppies need this time with their mothers so that they may grow.

Between 3-12 weeks, your German Shorthaired Pointer will go through many changes, as their muscles begin to get stronger.

They are fully weaned at 5 weeks to 5 ½ weeks old, and they have a full set of needle-sharp teeth. Most mothers would start weaning them soon enough on their own.

At 6 months, the German Shorthaired Pointer male weighs on average between 18 kg for the smallest dogs and 23 kg for the largest dogs.

The heat cycle will last for about 21 days, and the females are fertile at this time, but it is not advised that she gives birth before two years of age. Young dogs are not emotionally and physically ready to give birth because they have not finished their development. 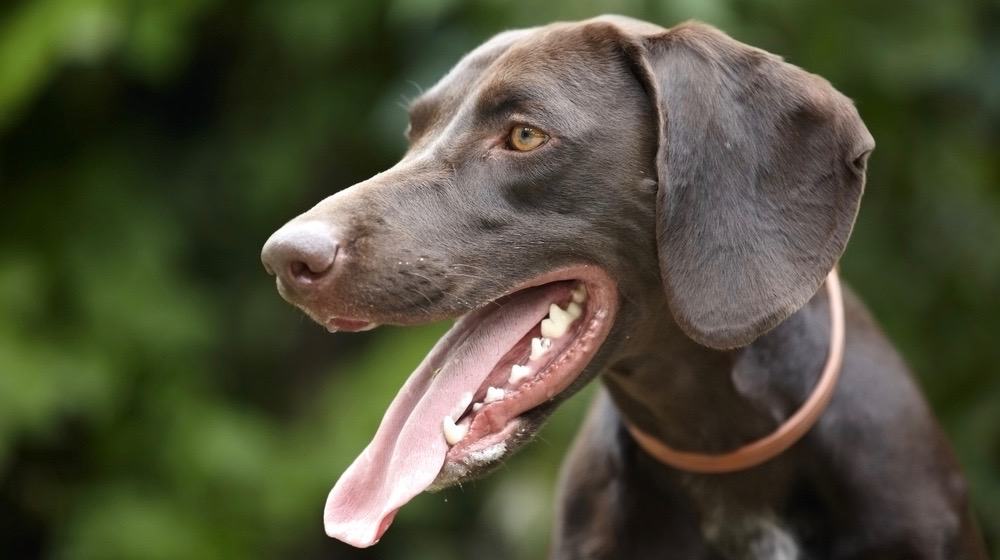 According to the American Kennel Club, the German shorthaired pointer males should stand between 23 and 25 inches in height from the top of the shoulder when they are fully grown. This is an average approximately of 24 inches.

Female pointers usually stand between 21 and 23 inches or an average of 22 inches. When it comes to show purposes, pointer dogs that are even slightly taller or shorter than this standard are “harshly penalized.”

The German Shorthaired Pointer Club of America acknowledges that gender affects the appearance of the breed because the males appear more masculine and females more feminine.

Hereditary factors have a great influence when it comes to a German Shorthaired Pointer’s growth. These genetic factors control the rate of growth along with other important factors that add to their development.

The type of nourishment given to your German Shorthaired Pointer puppy will affect his ability to grow. If you continuously give your dog low-quality food without the proper vitamins and minerals he needs to grow then his development will be negatively affected.

There are poor quality foods that do not provide enough nutrients, and it is full of fillers which have little or no nutrients needed by a growing puppy. They actually cause the growth of your dog to be stunted.

German Shorthaired Pointers are natural hunters. If they don’t get enough exercise they will be bored and get up to mischief. Sufficient exercise is required to promote growth and allow bone density to be developed.

Stronger bones and a fitter body will add weight to your puppy while keeping him healthy. Your German Shorthaired Pointer will have healthy strong muscles when he is allowed to exercise regularly.

What If My German Shorthaired Pointer Is Not The Right Weight

The German shorthaired pointer is a medium-sized dog that is particularly agile and lean. The major part of your dog’s weight should be made up of lean muscle. This means that pointers at a healthy weight may seem leaner when compared to other breeds.

The male pointers are usually a bit larger than the females. Male German shorthaired pointers should weigh between 55 and 70 pounds, while females should be between 45 and 60 pounds. 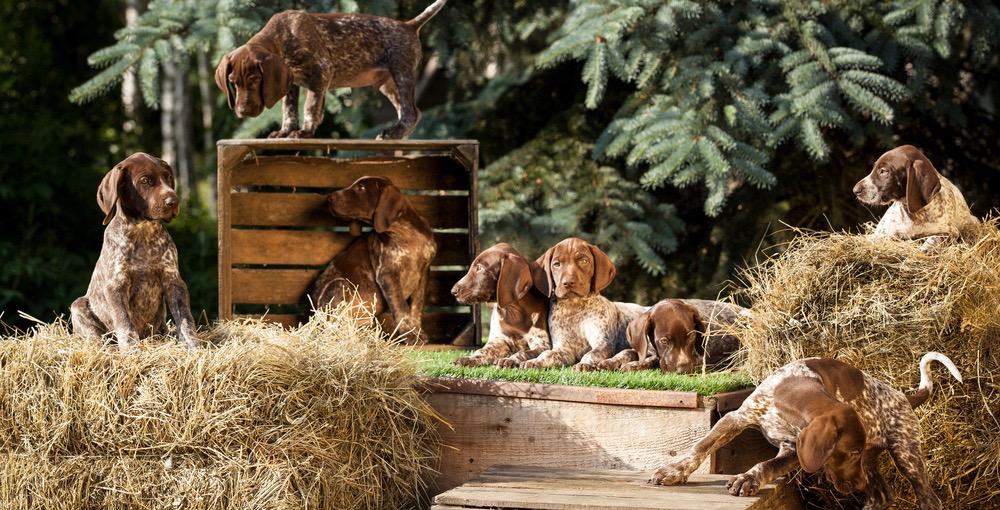 As a way to tell if your dog is the right size, you should be able to feel his ribs if you run your hand along his sides. If you can’t easily feel his ribs, then he is most likely overweight. Also, if you can see his ribs or spine through his coat, he is too thin. You need to switch him to a high-quality, high-protein food, and increase his daily portions by 1/2 cup.

For German Shorthaired Pointers, the normal gestation period is about 63 days from conception, but this can vary by several days. It is good to check with a vet because conception is often hard to determine.

The sperm can live for numerous days within the female, and eggs can remain fertile for up to 48 hours. This means the date that mating took place is not a precise measurement of gestation. This makes it difficult to determine the length of pregnancy without the assistance of a veterinarian.

Pregnancy in dogs is usually short when compared to humans. It comes up to about 9 weeks in total, and each day matters. Knowledge of the length of the pregnancy is crucial for the health of the pregnant dog and the puppies.

How Many Puppies Do German Shorthaired Pointers Have? 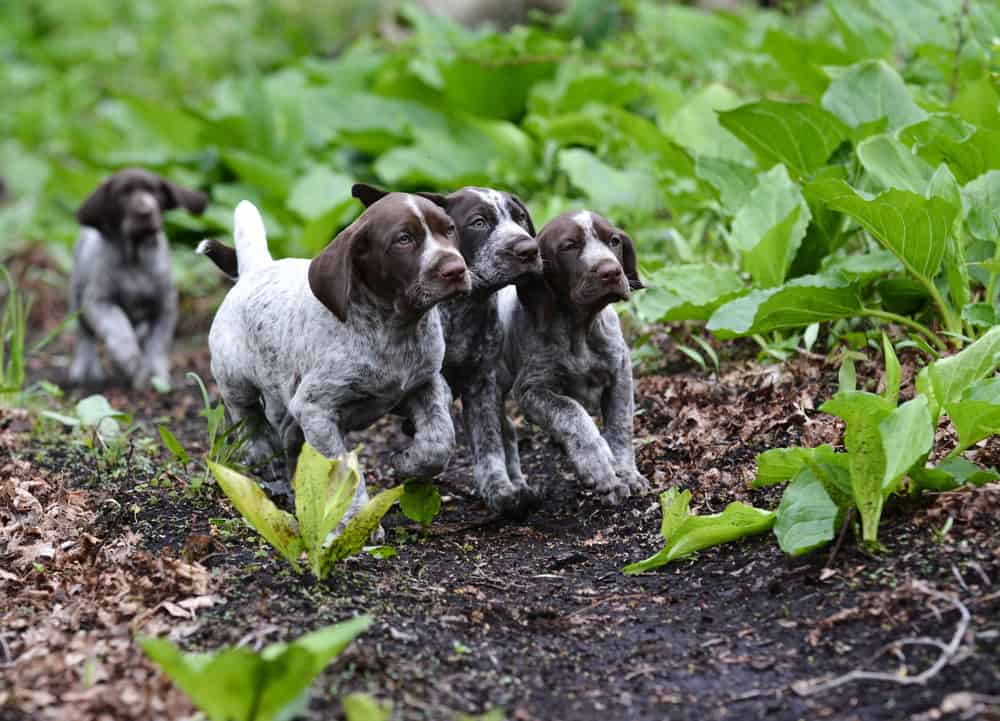 What Is The Life Expectancy Of German Shorthaired Pointers?

German Shorthaired Pointers are wonderful companions have a life expectancy of 12 to 18 years. This is quite a long lifespan for a dog. This is great news for owners who tend to be attached.

How Much Does It Cost To Own A German Shorthaired Pointer?

To own a German Shorthaired Pointer, the average cost is about $500 to $1000 annually with the average at about $800.00. This would cover all the expenses such as food, training, vet visits, toys, and vaccinations.

Because the German Shorthaired Pointers have shorter hair, the grooming costs are actually less than a much fluffier dog. But they are medium-sized dogs and require a lot of food, more exercise, and better training.

The German Shorthaired Pointer is predisposed to having numerous hereditary conditions such as epilepsy, hip dysplasia, skin problems, and eye disorders.

Epilepsy in dogs is a brain disorder that is often genetic, but can sometimes be caused by brain lesions. Dogs with epilepsy can have seizures any time, and they can last for about a minute.

Medium-breed dogs like the German Shorthaired Pointer are especially predisposed to cluster seizures which happen at frequent intervals of one to four weeks.