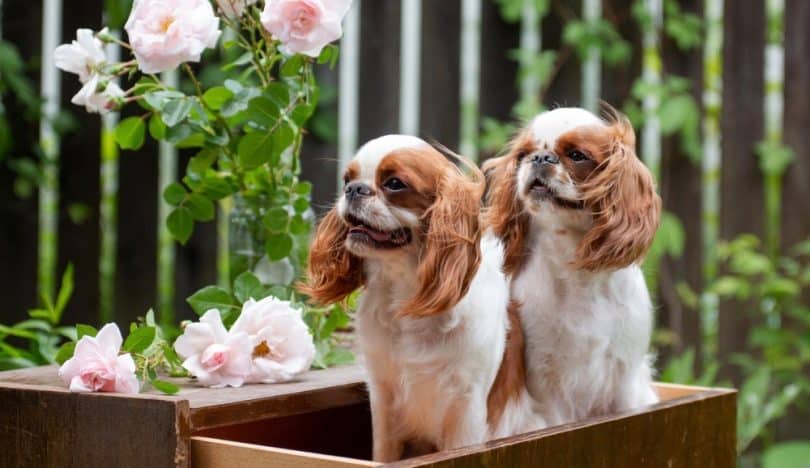 If you are considering adopting a new puppy, you might be wondering how big he or she will get. Looking at the Cavalier King Charles Spaniel growth chart will give you a good idea of what to expect.

The dogs get their name from King Charles II of England, who was very fond of the toy spaniel. He was known as the Cavalier King, which explains the rest of the dog’s name.

After King Charles II passed away, the popularity of the breed began to wane, and the dog was bred with dogs like the pug to give is a shorter snout and a more rounded head.

In the 1920s, breeders started breeding to recreate the old-look spaniel and the dog that emerged from that breeding program was named the Cavalier King Charles spaniel to differentiate it from pug-like dogs.

Called comfort dogs, Cavalier King Charles spaniels did an interesting ‘’job’’. They acted as flea habitats so humans could be spared flea bites and flea-derived diseases. 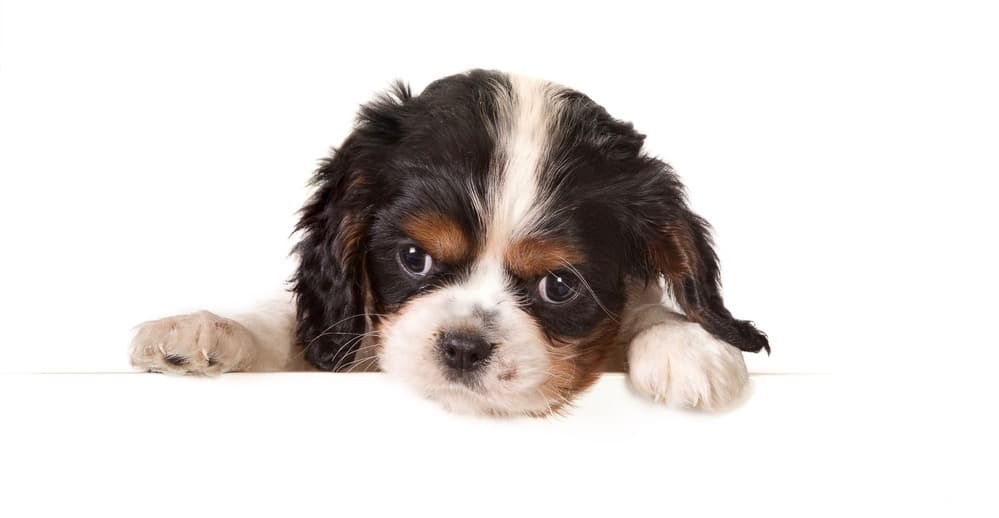 They typically stop growing somewhere between 10 and 12 months of age, but most of their growth is done by the time they are eigth months old.

The weight of the Cavalier King Charles adult dogs varies, with 5.9 for the smaller dogs and 8.2 kg for the larger dogs.

At three months when they are ready for adoption, the female dogs weigh 2.5 kg and the males weigh around 3.5 kg.

When the dogs reach 6 months of age, the smallest female weighs on average 4.7 kg and the largest individuals weigh around 6.4 kg.

At 6 months, the smallest Cavalier King Charles males will weigh on average 4.7 kg and the largest dogs will weigh around 6.4 kg. 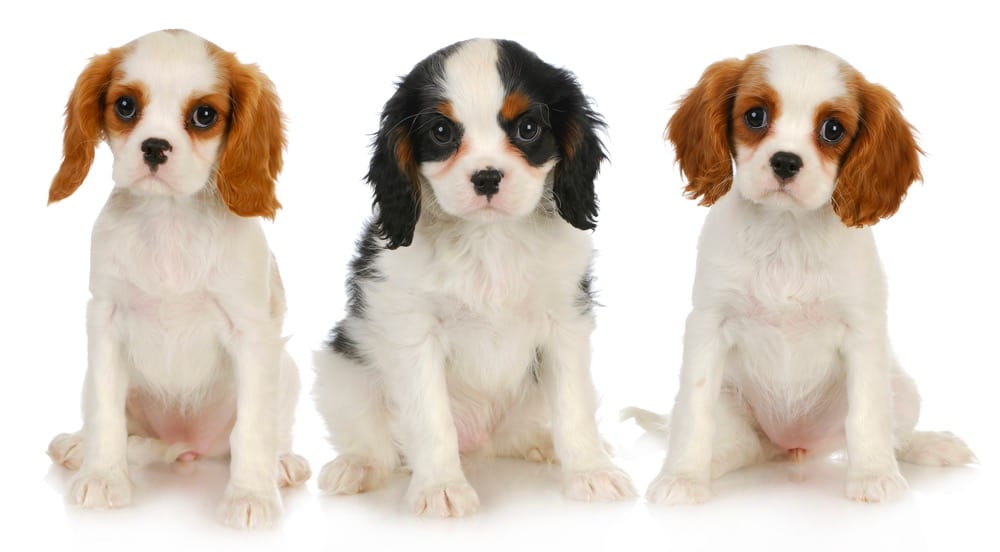 At birth, the puppies are completely helpless. They can’t regulate their body temperature, and are blind and deaf. They also can’t eliminate without stimulation from the mother licking them.

They are born with a strong suck instinct, and their smell, taste, and touch senses function. They can make little cry noises which indicate hunger, fear or cold.

Puppies grow fast at this stage, doubling their weight in the first week of life. By around the tenth day, their eyes and ears will open.

Week 2-3 is known as the transitional stage. The puppies are now able to recognize their littermates and by the time they are 3-4 weeks old, they’ll start recognizing humans.

From birth to 7 weeks, the puppy learns about how to be a dog, how to communicate and be with other dogs.

People should not handle the puppies excessively at this stage and should not remove them from their mother or littermates for more than 10 minutes at a time.

The period from 7 to 12 weeks is called the Socialization Period. This when you must introduce your Cavalier King Charles spaniel puppy to as many new people, situations, dogs, and positive experiences as possible. 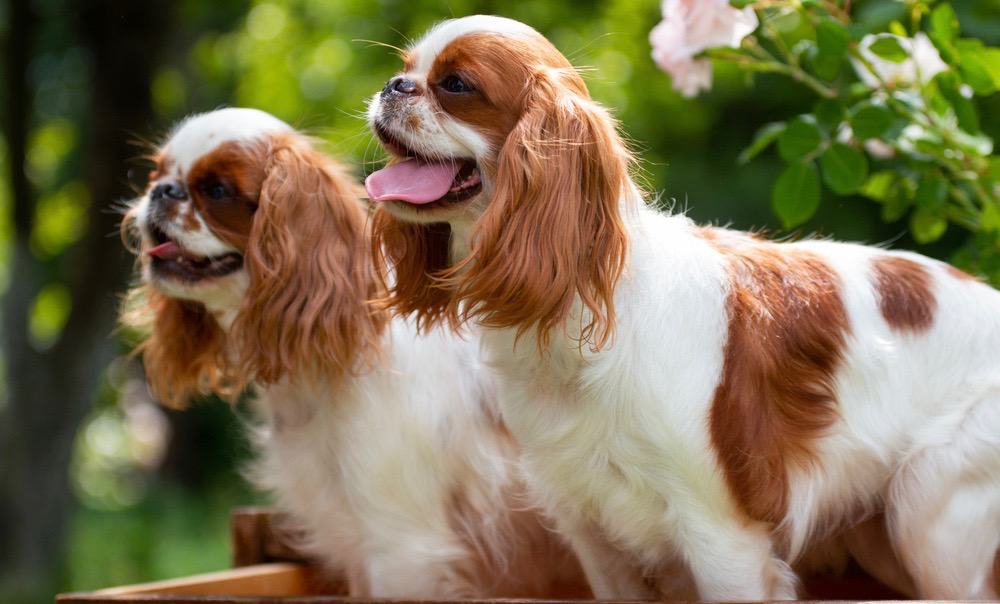 This is also the time when a puppy will show fear in certain situations. They register discomfort and pain and may cower or try to hide. Try not to expose your puppy to any fearful situations.

This is the independent puppy stage. Your teenager dog wants to explore the world on his own. During this rebellious period, your dog may ignore commands that he already mastered and may not come when called.

It is important to deal with the situation immediately. Take your dog to a puppy training class if he refuses to obey you.

Like a typical teenager, your Cavalier King Charles Spaniel puppy will need to be kept on a leash when outside of the yard, as it may decide to ignore commands while you are out with him. Also, don’t let stuff lie around – he will chew everything in sight.

A puppy at this stage may also begin to show signs of sexual maturity, so you should isolate your puppy from dogs that have not been spayed or neutered.

From this time right to 12 months of age is a demanding time for puppy owners because they need to spend as much time as possible socializing their puppy to its new life.

The importance of continuing with socializing cannot be overstressed, especially if you keep this shocking statistic in mind: according to research, one of the major causes of death in dogs under two years old is not disease but euthanasia because of behavior problems.

This is the second fear imprint stage. Your dog may suddenly be shy and not keen to meet new people or other dogs. Be patient and keep exposing your dog to different people and situations.

Your dog may look like a mature dog, but it’s still very much a puppy and loves to fool around.

Make the best of this special time to bond with your dog and to let it bond with other family members. At this stage, puppies have lots of energy, so your dog needs to get out and get exercise.

Continue to socialize your Cavalier King Charles Spaniel throughout all the stages of its development to ensure that you have a calm and well-behaved dog.

The Cavalier King Charles Spaniel grows up to be an indoor dog with a sweet personality and acts as a constant companion to family members.

These dogs become very attached to their human family and get distressed when they are left alone.

The Cavalier King Charles Spaniel is a friendly breed and not suspicious. This is a house dog that won’t protect you against intruders and might not even warn you when a stranger approaches. So don’t choose a spaniel if you need a watchdog.

As an adult dog, the Spaniel is affectionate and good with kids and other dogs provided it was properly socialized.

How Big Will My Cavalier King Charles Spaniel Puppy Get

It is easy to work out how big a dog will get. Dogs reach 75% of their adult height when they are six months old.

To predict your puppy’s adult height, measure his height when it’s 6 months old, multiply this figure by 100 and divide the result by 75. In other words, puppies achieve about 75% of their adult height at 6 months.

Remember to measure the height of the dog by measuring from the top of its shoulder to the floor, not the top of its head. Let the dog stand on a level surface and make sure it’s not slumping. 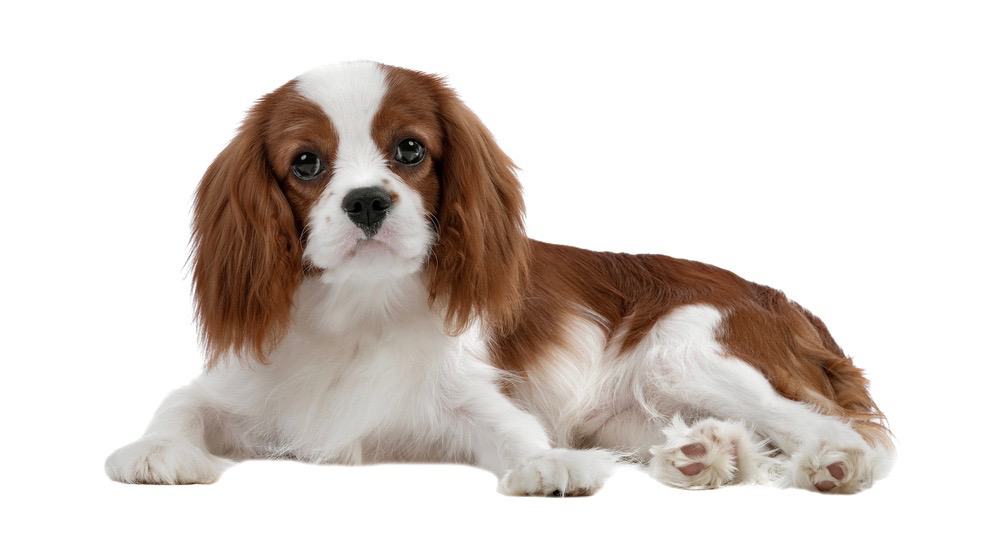 Cavalier King Charles Spaniels are slightly shorter. They measure between 12 and 13 inches to the shoulders compared to the 14 – 15 ½ inches of the Cocker Spaniel.

Genetics is the determining factor in deciding the size of dogs. The Cavalier King Charles Spaniel is a toy dog breed, but it is a large toy breed. It is a small dog, but not as small as other toy breeds.

What you feed your dog will determine its growth. A puppy that gets in high-quality nutrition through a balanced diet will flourish and put on weight. 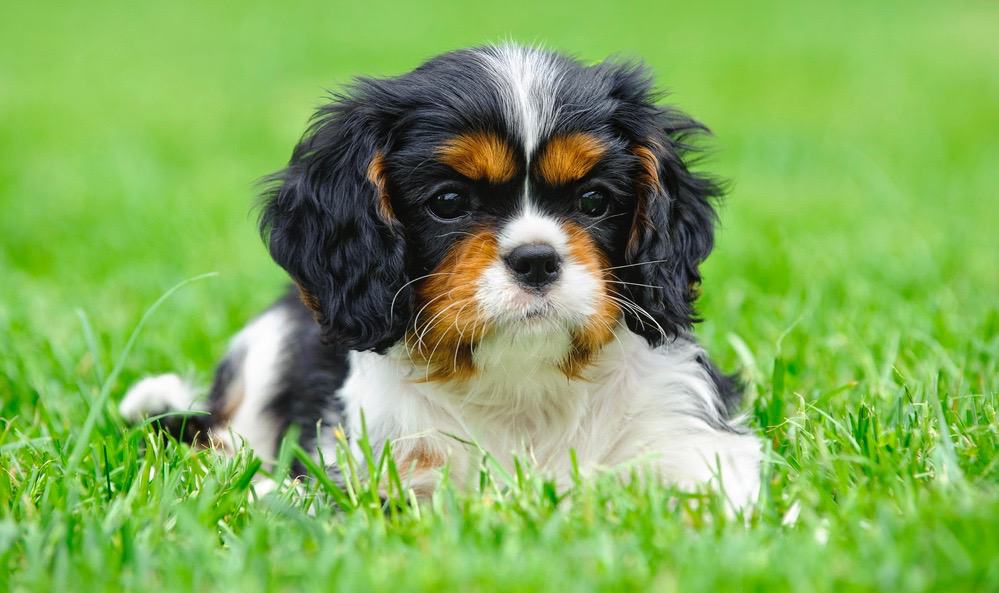 Make sure you feed your Cavalier King Charles Spaniel the best quality dog food you can afford. And don’t be tempted to feed it snacks between meals. These dogs put on weight easily and that can lead to health problems later in life.

Some members of this breed like to be active and others are quite happy to spend all their time on their owner’s lap.

Regardless, make sure your little companion gets daily exercise, otherwise, she will put on too much weight and that happens easily with this breed. Besides, all dogs need exercise to strengthen their bones and muscles.

Your dog can be over-or underweight for several reasons. Sometimes the dog is simply smaller than the standard size and weighs less.

This is not really a weight problem. However, if you can easily see your dog’s ribs, then it is underweight and you should take it for a check-up.

If your dog is overweight, it’s probably due to a combination of a poor diet and lack of exercise. Cavalier King Charles Spaniels are adorable dogs and it’s very easy to spoil them with snacks and before you know it, your little friend is overweight.

Fortunately, you can easily rectify the situation. Simply stop the snacks between meals and make sure you feed your dog a balanced diet and get your little friend moving.

What Is The Life Expectancy Of Cavalier King Charles Spaniels?

People often wonder how long their dog will live. It’s understandable because it’s a fact of life that dogs don’t live very long and people want to know how long their friend will be with them.

Of course, there is no way to predict how long a specific dog will live, but there are averages available for some of the more well-known breeds, of which the Cavalier King Charles Spaniel is one. 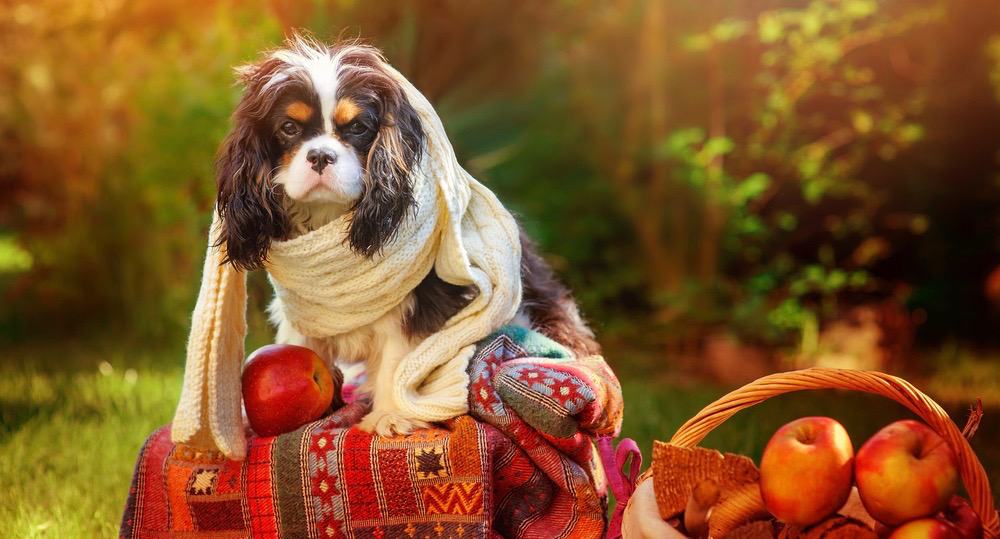 The Cavalier King Charles Spaniel can be expected to live a reasonably long life of 9-14 years.

Female dogs generally live 1.1/2 years longer than males, which is the case with all dog breeds.

The Cavalier King Charles Spaniel is generally a healthy breed. Below are three hereditary conditions that commonly afflict this breed.

As Cavalier King Charles Spaniels age, the heart valve can thicken and change shape, which causes it to leak and, over time, this results in blood pooling behind the heart. The condition can’t be prevented and there’s no cure for it.

If you notice your dog crying and scratching its shoulders it might be suffering from Syringomyelia.

This is a hereditary condition that affects Cavalier King Charles Spaniels when the skull is not large enough to house the brain. The condition is painful for the dog, but if it is diagnosed early enough, surgery can be a solution.

The Cavalier King Charles Spaniel, and many other small breeds, often suffer from patellar luxation or slipped kneecap. This happens when the thigh bone is deformed and causes the kneecap (patella) to slip out of place.

Other health conditions that can afflict these dogs are hip dysplasia, retinal dysplasia, and epilepsy.

Cavalier King Charles Spaniels have a fancy name that suits them. The breed has an interesting royal history.

Did you know that at the beheading of Mary Queen of Scots in 1587, her toy spaniel refused to leave her and hid under her skirts during her beheading? The little dog died from grief a few days later.

This beautiful little dog will love you like that. It will stay with you and keep you company through all of life’s tribulations.

Being so adorable, they have the power to steal a person’s heart and affection and any treats that go with it.

So, be warned: don’t give in to those expressive eyes. This breed easily puts on too much weight. Rather than giving it treats, treat it with your company on a walk to the park.

Remember, Cavalier King Charles Spaniels are companion dogs that don’t like to be left alone. They are ideal pets for the elderly who don’t go out much.