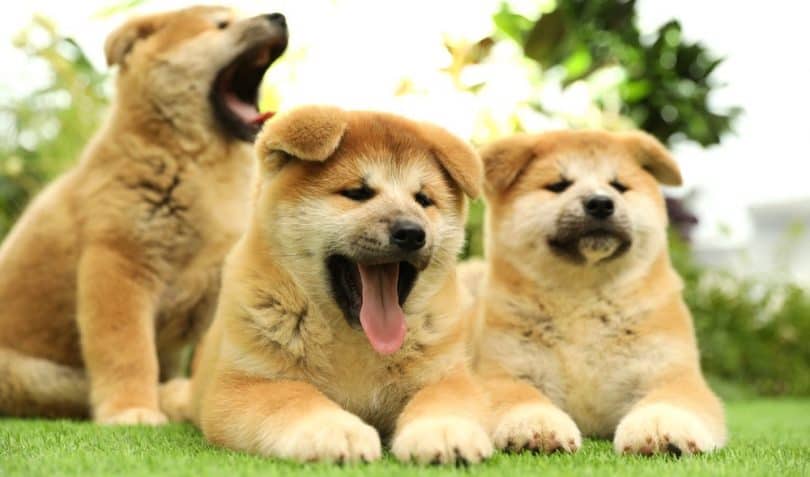 The Akita are special dogs that originated from ancient Japan. They are known to be a symbol of long life, good health and happiness.

Their thick double coat sheds heavily during warmer months, and they have a strong muscular physique. They make great family dogs as they are playful loving and loyal, but they may be wary of strangers, so you need to take time to get to know them.

There are two types of Akita dogs. There is the Japanese Akita and the American Akita. They will both grow to be approximately the same size, but they can have different colored coats. They were originally bred for fighting and hunting, and are a good fit for many owners.

Many new dog parents to Akitas often wonder how large they can grow and at what age they will stop growing.  An Akita growth chart will be a great help in discovering these facts.

When Do Akitas Stop Growing 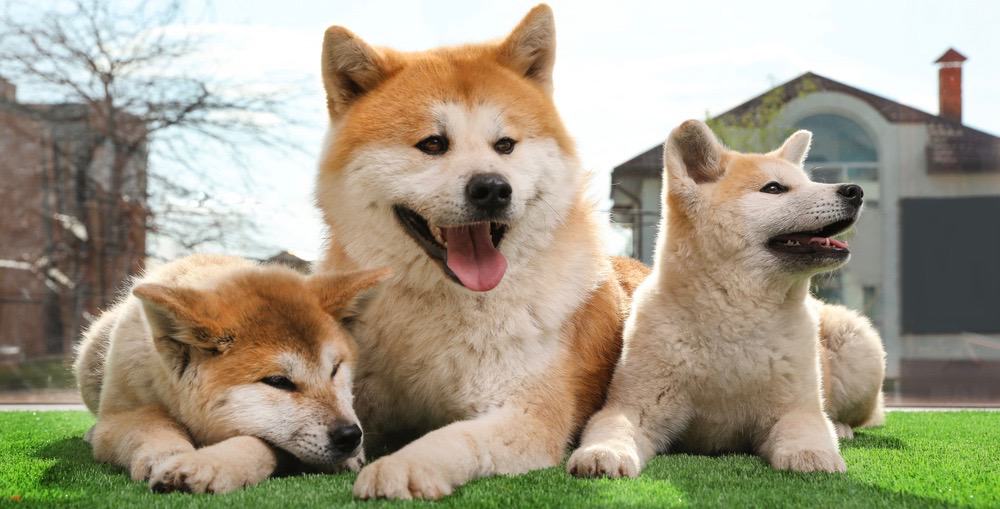 Akitas generally take a bit longer to develop into their full adult size. This is typical for large breed dogs that need more time to grow than smaller-sized dogs do.

Most Akitas will reach close to their full size by the time they are approximately 10 months old. However, until they reach the age of two, they will continually gain weight.

The size of your Akita really depends on their age and their lifestyle. The foods they eat and level of physical activity, play a major role in their weight and health at any given time.

Another way to check your Akita’s development is to look at their paws. If their paws still look too big next to the legs and body, then they most likely have a lot more growing to do as this is a characteristic of a puppy. Looking at an Akita growth chart should give you a good idea about your dog’s expected weight.

The following chart gives an average size of your Akita’s weight. In many cases, the weight may be higher or lower than what is stated in the chart. In most instances, this is normal.

However, please keep in mind that if you find your Akita’s weight is drastically less than any of the numbers that appear on the chart, you should evaluate his health. Your Akita may be too small and may have a greater chance of developing several health problems.

It’s important to know what age your Akita stops growing. Humans have BMI and growth charts for the same purpose. Akitas have healthy levels within which they should be kept.

Also understand that, if your Akita’s weight is higher than any of the numbers in the chart, you should not worry. Although your Akita may not fall within the perfect range, holding several extra pounds over average is fine.

Just ensure that you always check with your veterinarian. Please use this chart as a guide but remember that it won’t be applicable to every case.

Akita Growth Chart – What To Expect 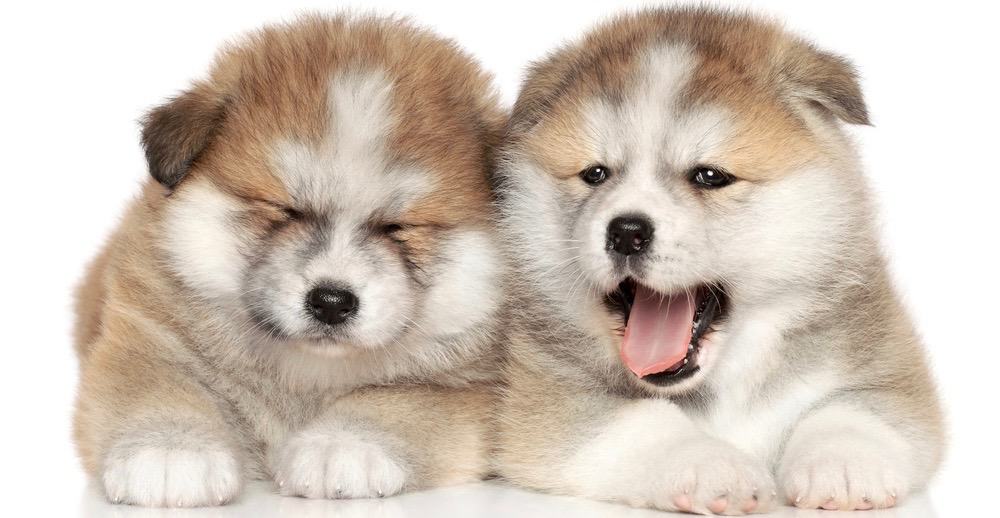 Akitas are born in a delicate state as they are can’t look after themselves. They depend on their mother for warmth comfort and nourishment.

Newborn puppies require an optimal temperature to survive. They snuggle close to their mother, but they can’t walk yet because of their undeveloped muscles. The puppies need this time with their mothers so that they may grow.

Between 3-12 weeks, your Akita will go through many changes, as their muscles begin to get stronger. They are fully weaned at around 28-30 days old, and they have a full set of sharp teeth.

Most mothers would start weaning them soon enough on their own.

This is an important stage. The heat cycle will last for about 21 days, and the females are fertile at this time, but it is not advised that she gives birth before two years of age.

Young dogs are not emotionally and physically ready to give birth because they have not finished their development.

It can be very dangerous for your Akita to get pregnant during this stage and if they are, there can be issues with the pregnancy, death of pups, and even birthing complications which can lead to organ failure as well as the death of the mother.

The Akita male and female will end its growth at 2 years. The common size of adult Akitas is approximately between 70 and 100 pounds for females and 100 to 130 pounds for males. 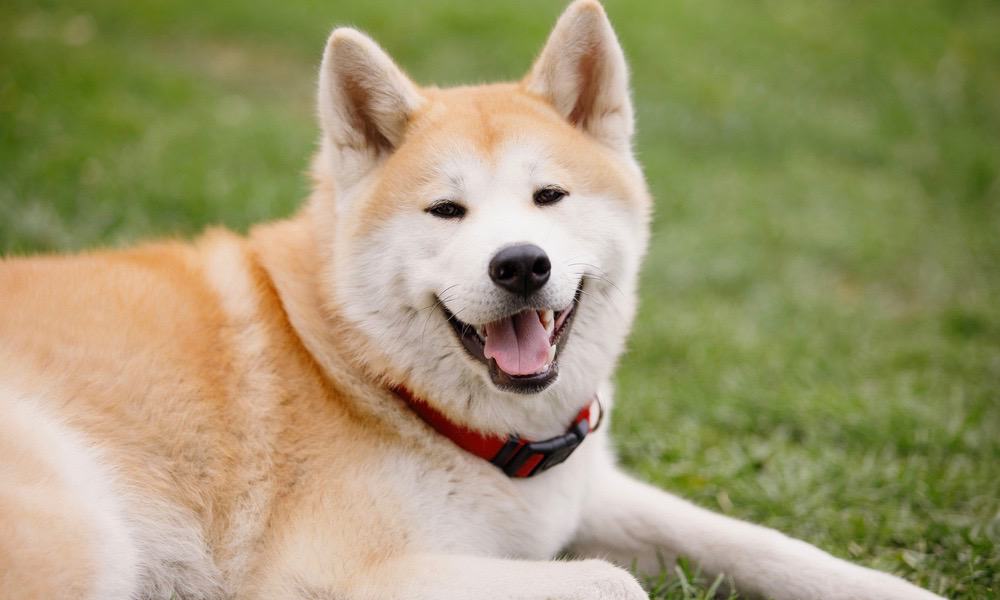 A full-grown Akita is usually compact and muscular, with commanding stature. Overall, they are well-balanced and tend to be longer than tall. Until they are two years old, many Akitas will continue to fill out their chests and gain muscle.

There are two types of Akita dogs. There is the Japanese Akita and the American Akita. They will both grow to be around the same size, but they can have different coat colors.

The American Akita and the Japanese Akita Inu are two separate breeds that can be differentiated by color, body shape, size, and personality.

The Japanese Akita Inu has four colors, which are brindle, red fawn with black tips, red fawn, and white. They do not have black masks. The American Akita has all colors and markings, with some having black masks and white blazes on the forehead.

Another key difference is that the Akita Inu, has almond-shaped eyes and a fox-like face. The American Akitas and Akita Inus differ in their head and eye structure. On the other hand, the American Akita has a broad head and small, deep-set eyes, favoring a bear.

Genetic factors greatly affect an Akita’s growth. These hereditary factors determine the growth rate as well as other essential factors that add to their development.

For example, if both parents are large, then the offspring will be also. The fully grown dog will be approximately the average of the parents’ sizes.

The type of nourishment given to your Akita puppy will affect his ability to grow. More nutritious food gives your dog all the nutrients that it needs to grow larger and stronger.

You may have to give supplements to your Akita for his health. These are in cases when your dog may be grossly underweight or malnourished to help them to grow to their average height and weight.

Akitas were bred to be hunters so if they don’t get enough exercise they will not be able to meet developmental milestones. Sufficient exercise is required to promote growth and allow bone density to be developed.

Your Akita will have healthy strong muscles when he is allowed to exercise regularly. It’s important not to overdo it because Akitas who exercise too much may suffer damage to the growth plates. This injury may inhibit their growth and cause them to be smaller than usual.

How Long Are Akitas Pregnant?

For Akitas, the normal gestation period is about 58-63 days from conception, but this can vary by several days.

You should always check with a vet because conception is often difficult to pinpoint. This is because the sperm can survive for numerous days within the female, and eggs can remain fertile for up to 48 hours.

Therefore, the mating date is not an accurate measurement of gestation. This makes it difficult to determine the length of pregnancy without the assistance of a veterinarian.

Akitas are generally full-grown and ready to reproduce when they are at least two years old when they are bred for the first time. The suggested upper limit for breeding your Akita is the age of seven.

To protect your Akita’s health, there should be at least one year between successful mating sessions. Additionally, no Akita should be pregnant more than three times in her lifetime. 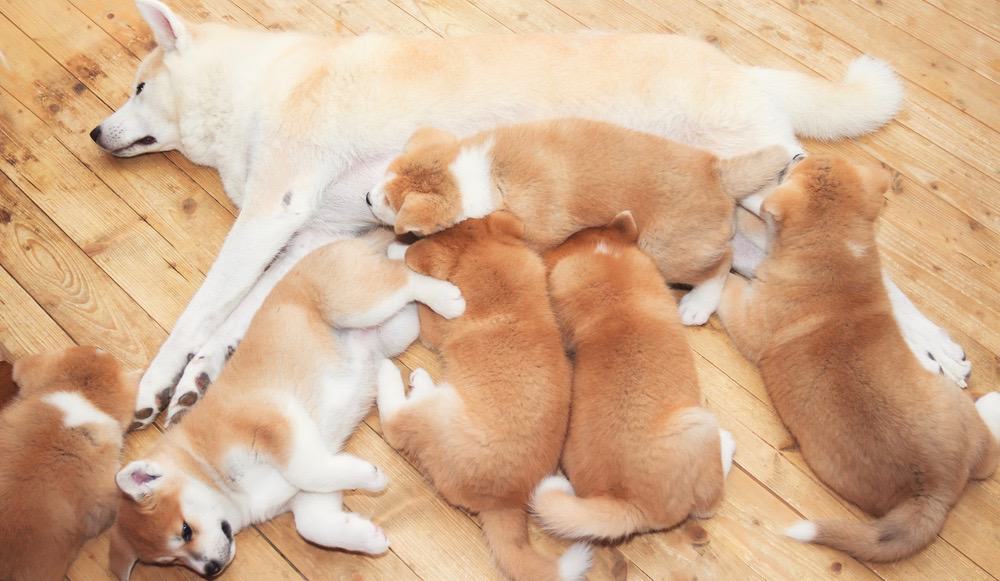 How Many Puppies Do Akitas Have?

The litter size may also be determined by the time when the dog is bred. Breeding at the right time (after 2 years) will result in a better litter of pups. Akitas have medium to big litters. The average litter size for Akitas is about 3-12 puppies with a median of about 8 pups.

Female Akitas enter their heat cycle about once every six months. It lasts approximately three weeks or so. If your Akita is bred outside the 2-7 year time period, there can be issues with the pregnancy.

As your Akita get older, she runs the risk of having health problems such as hip dysplasia, immune disorders or hypothyroidism that can complicate pregnancy causing loss of the pregnancy or extreme pain.

What If My Akita Is Not The Right Weight

As a general average, female Akitas will weigh between 70 and 100 pounds while their male counterparts will weigh 100 to 130 pounds. They are a large breed dog that is especially lean and agile.

A significant part of his weight should be comprised of lean muscle. Therefore, Akitas at a healthy weight and may seem leaner when compared to other breeds.

Akitas have hearty appetites and will gain weight if their diet is not correctly controlled. You should focus more on proper diet and sufficient exercise to have a healthy dog. It is also good to consult your vet and Akita weight chart if you are unsure about his weight.

What Is The Life Expectancy Of Akita?

Akitas are excellent companions who have a life expectancy of 10 to 15 years. This is quite a long lifespan for a dog. This is great news for owners who want to keep their dogs around for a long time.

Dogs don’t live forever, so it is important that you do what you can as a dog parent to increase the average lifespan of your companion. There are numerous factors that affect the longevity of Akita dog, such as breed, size, and the general health of the animal.

How Much Does It Cost To Own An Akita?

To own an Akita, the average cost is about $700 to $1200 annually with the average of about $800.00. This would cover all the expenses such as food, training, vet visits, toys, and vaccinations. The American Akita also costs an average of $800 to purchase.

Akitas shed during the spring and fall, and you can expect to pay about $62 each time they are sent to be groomed. They are also large dogs and require a lot of food, more exercise, and better training.

Akitas are inclined to suffer from a variety of health issues including hip dysplasia, knee injuries, and skin diseases bringing average possible health care costs to $4,500 throughout their lifetime.