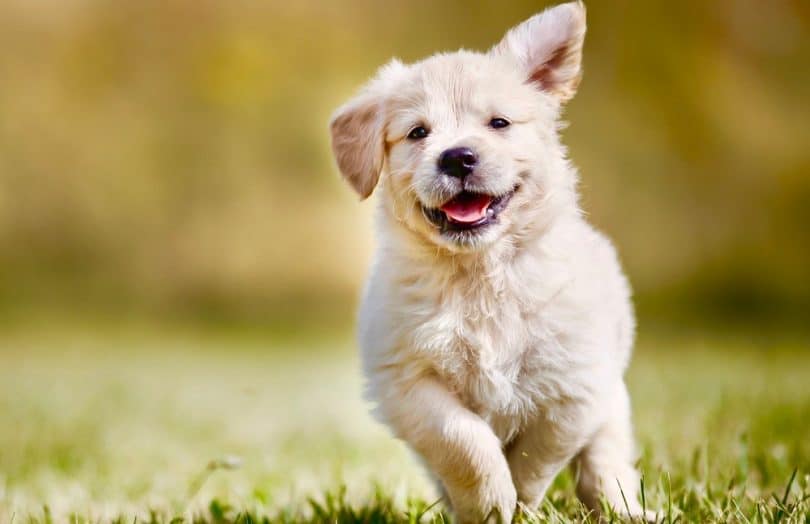 For your lifelong, furry, loyal companion, the least you can do is monitor their health and growth. One of the major components that you need to look out for when you have a Golden Retriever, is to make sure that your pup is in-line with the general Golden Retriever growth chart. This can help you monitor your pup’s growth process and make sure they are healthy.

Especially if you’re small in stature yourself, you may be wondering when your Golden Retriever will stop growing!

These questions—and so many more—will be answered in this article about Golden Retrievers and important growing information.

When Do Golden Retrievers Stop Growing

However, in general, a Golden Retriever will stop growing when they reach the age of around 1.5 years—or 18 months old.

You can expect your pet to be at its full height and weight, (which you can follow in the Golden Retriever puppy growth chart), which is around 65-75 pounds for males and 55-65 pounds for females.

To help you evaluate your Golden Retriever’s growth process, we’ve included this chart down below, separating the growing stages of both the male and the female Golden Retriever.

If you’re a first-time Golden Retriever owner, you’ll want to make sure you’re using the chart correctly, to be able to check whether or not your pup is hitting the average weight according to their age—or at the very least, hitting the minimum sizes.

On the left side of the chart, you’ll find the column dictating the age of your Golden Retriever, which can be measured in weeks. Since the first seven weeks of your pup’s life are pretty standard and unpredictable in growing times, the chart first starts at this week number, where they should be reaching the standardized sizes.

At seven weeks, a Golden Retriever male puppy should be weighing at the very least 4 lb, whereas the female puppy actually has a bigger stature at a 5-pound minimum.

As the weeks progress, you’ll notice the minimum weight going up just a few pounds to even as much as almost 20 pounds at certain stages! We would recommend consulting with your veterinarian about any particular questions you may have about your specific puppy’s size.

From birth to the first three weeks of their lives, your Golden Retriever will be in the neonatal stage, which will be quite a developmental stage in their lives. During this fragile period, the Golden Retriever is actually quite helpless in nature and should be kept with their mother.

No matter if your Golden Retriever is a female or male, your pup will typically be measuring under than five pounds. During this earlier stage of life, the pup will encounter various milestones, including learning how to open their ears and eyes, having their first baby teeth come through, and even learning how to crawl or walk awkwardly.

In every litter, there also tends to be the “runt” of the litter, which is the smallest one. This specific pup needs to be handled with care!

During the socialization process, the Golden Retriever will start to explore and fill out its body as it finds its place in the world. This particular period in a Golden Retriever’s life is essential for its growth. Although some breeders tend to keep the pup with his or her mother, there is some other speculation of letting them loose and into the wild for exploration (not really the wild, don’t worry).

During this period, the Golden Retriever will also start eating some solid foods and be able to play and start to house train! This is a very developmental period indeed! From three to twelve weeks, a Golden Retriever can reach up to 22 or 23 lbs in size (depending if the dog is female or male)! 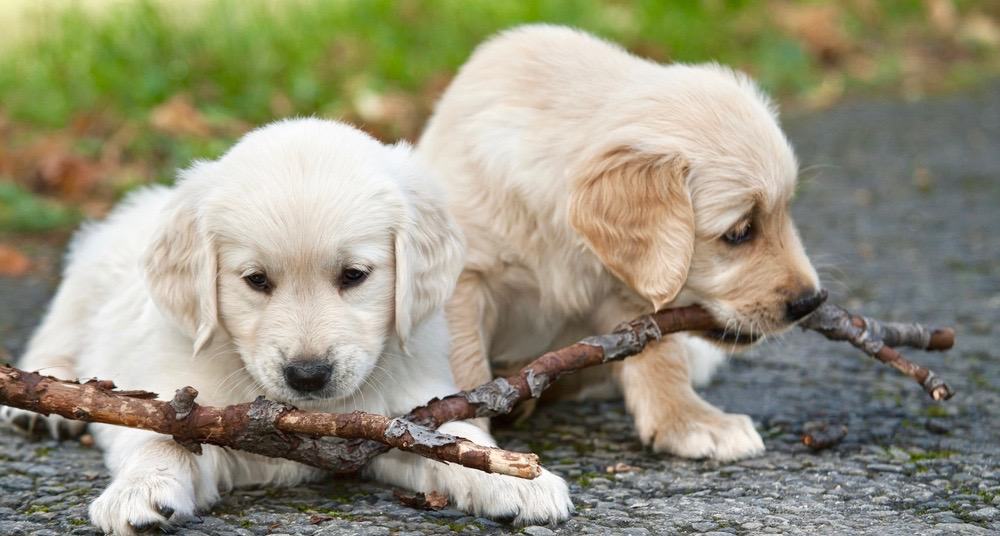 At this juvenile stage, the Golden Retriever is starting to learn about the world around him or her. The rapid growth phase will tend to slow down at this point in time in their development, indicating that they are pretty close to approaching a fully-developed size.

During this juvenile period, the pup will start to lose their baby teeth and will be ready to start training. This is a critical time in development where the dog can learn about fundamental behaviours like potty training and gaining clear and consistent rules for everyday life. A Golden Retriever at this stage can reach 38 to 52 lbs—or even up to 75 lbs at its biggest!

As your dog reaches sexual maturity, a Golden Retriever will grow to its full size during this period of development. If the dog has not been yet neutered or spayed, they will reach sexual maturity and entering heat cycles as well as mating behaviour.

This can lead to territorial behaviour. During this period, your dog will also start to grow quite quickly in their legs, ears, and nose. This rapid growth in particular areas leaves the Golden Retriever quite vulnerable with their bones, which can lead to injury if not taken care of—which means that you should help your dog avoid excessive pressure on the joints.

At the adult stage, above 16 months, most Golden Retrievers have reached full growth—however, some dogs even have some more growing to do!

There can be some leftover growing in a Golden Retriever’s development process all the way up to 2 years in age! During this period, you can expect your Golden Retriever to also develop a very specific and fixed personality.

You’ll be able to point out your dog’s likes and dislikes as well as expect certain behavioral responses. A fully grown pup can reach up to 90 lbs. However, you can tell a lot about the size of your dog in accordance with their parents’ size! It’s a good indicator of what to expect when it comes to size.

As your Golden Retriever pup gets older, you’ll notice that they’ll eventually stop growing. If you’ve noticed that your pup has not gotten to the particular milestones suggested in the Golden Retriever growth chart, then you may want to consider the various factors in the different types.

Just like with humans, Golden Retriever puppies will also be inheriting physical traits from their puppy parents! If you’re aware of the height or weight of your dog’s parents, then you can definitely have an idea of the size to expect when your dog is fully grown.

Although it’s not one hundred percent necessary to know your dog’s parents’ sizes, this can help eliminate any surprises!

Of course, nutrition can impact the puppy’s growth. If your Golden Retriever is not getting the proper nutrients—including vitamins, minerals, and various essential aspects like protein—then you may seem a stunt in growth, as you Golden Retriever doesn’t have the fuel he or she needs to reach their full height or weight.

This can also go the other way, with the possibility that a Golden Retriever is also getting overfed, where they then become overweight—especially if they’re not getting adequate exercise!

To help your pup stay at a proper weight for its size and age, you’ll need to make sure that you’re engaging him or her in regular activity. For a Golden Retriever, whether growing or fully grown, it’s important that they get at least one walk per day, but can definitely benefit from two!

Try and get your walks to be around a half-hour to an hour long if you’re able to fit it into your schedule! This can also be beneficial for your health and activity level.

If you don’t have the time in your busy day, you can also consider hiring a dog-walker to get your pup the exercise it needs to be healthy and grow properly.

This type of breed has been regarded as a medium to medium-large sized dogs. However, the average height of a Golden Retriever can significantly be affected by not only genetics and your pup’s parents but also by their gender—and even where you live in the world!

How Long Are Golden Retrievers Pregnant? 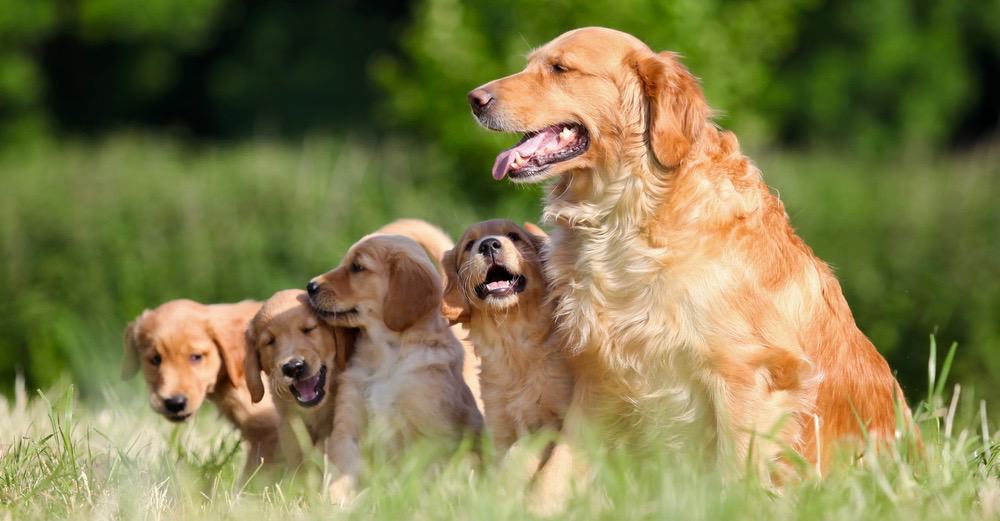 The gestational period of a Golden Retriever will typically be around 63 days, plus or minus a few depending on your particular dog.

If your pregnant dog has not had their litter—despite showing certain symptoms like a body temperature drop, lack of appetite, restless, nesting or a visible puppy movement in the abdomen—then it might be time to visit your veterinarian to get the process going!

How Many Puppies Do Golden Retrievers Have?

If this is your first time becoming a Golden Retriever grandparent, you might want to know what you’re about to get into!

For a Golden Retriever, you’re going to expect the average litter size for this breed to be around eight puppies, but can vary from four to twelve for one litter! However, there have been instances where a pregnant Golden Retriever has had as little as one puppy and as many as 17! Your veterinarian can definitely help you prepare better for a specific number.

What If Your Golden Retriever Is Overweight or Underweight

you’ve consulted the chart and have concerns about whether your Golden Retriever is over or underweight, there are a few steps to take to be able to evaluate your dog.

If your dog is at a healthy weight, then you should be able to easily feel his or her ribs. If your dog’s stomach has visible signs of sagging, that should mean there is too much fat on your dog’s body and appropriate measures (more exercise, less food) should be taken to help them get to a better weight.

Your dog should actually have a sort of “hourglass” figure. If there is no slight curve in your dog’s waist, that could mean that your pet is potentially overweight. A rounded face or visible folds of skin are also indications of an overweight Golden Retriever. And finally, if your dog has a lack of desire for exercise and is extremely uncomfortable in warmer weather, this could mean that they are overweight.

On the other hand, if you can see your dog’s ribs and spine, has a severe abdominal tuck or have no fat at the base of his or her tail, these can be signs that they are underweight.

How To Keep Your Golden Retriever In Shape 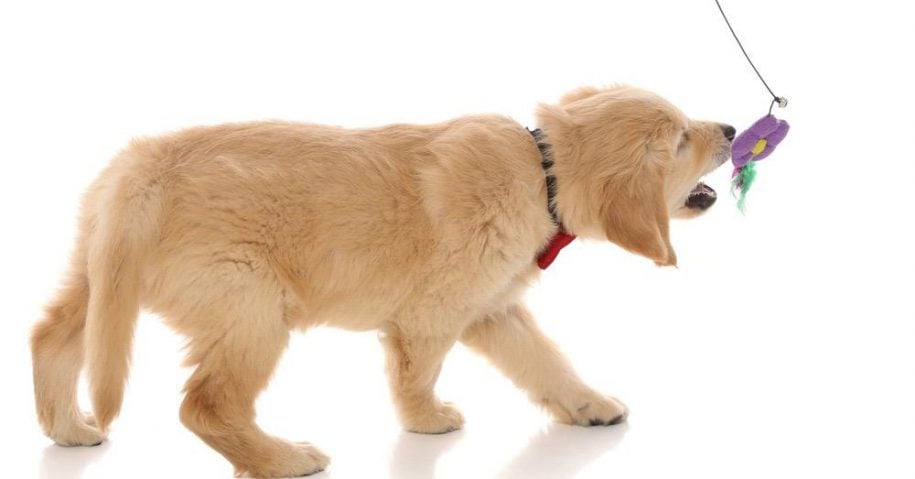 Just like humans, your dog also needs to stay in shape to be healthy and grow properly, hitting all the necessary milestones when it comes to weight.

Developed originally as a sporting breed, the Golden Retriever was able to go through an entire day of hunting with no issues. This means that your dog’s exercise habits should show the same sort of energy. When it comes to exercising regularly, your dog should be consistently exercising around 20-30 minutes, twice per day. This can help not only keep your pup healthy but help them expend any excess energy they may have pent up.

What Is The Life Expectancy Of Golden Retrievers?

Speaking of “long”—how long do golden retrievers grow? Golden Retriever males can be around 23 to 24 inches tall where females can reach around 21.5 to 22.5 inches tall.

How Much Does It Cost To Own A Golden Retriever?

With the upfront cost of a Golden Retriever being around $500-$2,000 from a breeder, you can expect to pay that price for the original purchase of your new dog. However, this price may vary depending on where you get your dog from—which can vary if from a pet store or home breeder without AKC documentation.

The Golden Retriever is most known for having an average issue of elbow and hip dysplasia—which is commonly seen in medium to larger breeds. This is where the femoral head partially dislocates and sometimes requires surgery.

Another common health problem is cancer, with the most common kinds as hemangiosarcoma, lymphosarcoma, mast cell tumors, and osteosarcoma.