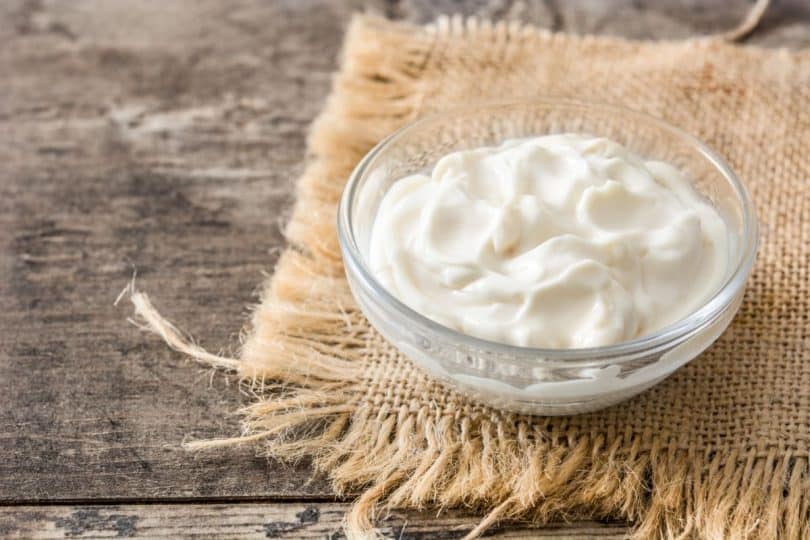 Dog owners everywhere will tell you how much they love sharing food with their beloved four-legged friends. It is always fun to see your dog’s face light up as you give them a piece of chicken or a slice of ham.

However, not all foods are safe for dogs to eat, and these are the foods that we can never give them no matter how much they give us those sad puppy eyes.

Notable examples are chocolate and onions. However, there are many other foods that you should avoid feeding your dog that are much less known.

In this article, we will discuss whether or not your dog can eat sour cream. So, if this is of interest to you, then read on for more!

What Is Sour Cream?

Sour cream is a type of cream that has added bacteria and has been fermented. Humans have been eating sour cream for many, many years. It is a key ingredient in making food taste amazing!

But can our dogs eat it, too?

Yes! Dogs can indeed eat sour cream. If your dog is intolerant to lactose, then it should be able to consume sour cream with no issues.

Naturally, if your dog is lactose intolerant then sour cream should be avoided. However, sour cream is not toxic to any dog, so if they steal some from your plate it is not going to hurt them.

However, there is a much longer and more convoluted answer to this question. While dogs can indeed eat sour cream, it is not a healthy food for them. So, there are some  things you should know before you let your dog eat this delicacy.

The Nutritional Facts Of Sour Cream 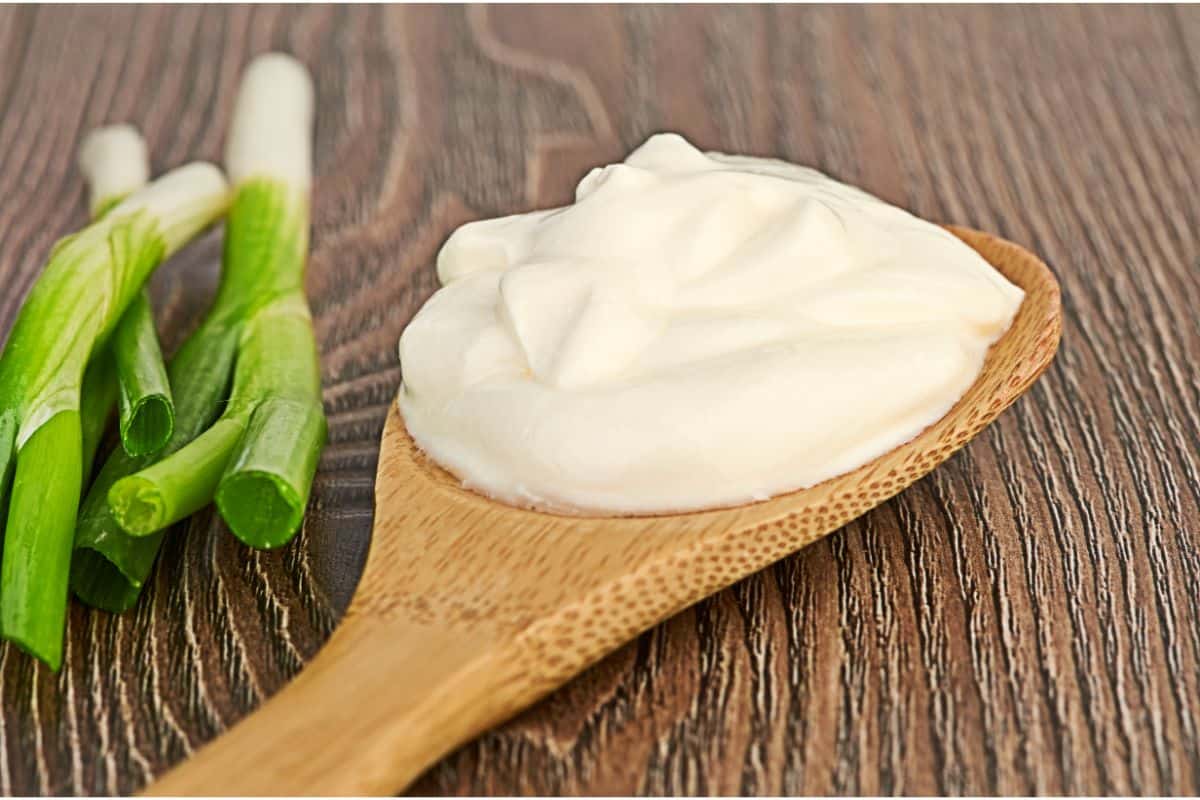 The bacteria that go into fermenting sour cream are L. lactus and B. bifidus. Both of these produce lactic acid. This results in the tanginess that is characteristic of sour cream.

The bacteria get destroyed during the processing, but the resulting probiotics will be preserved by manufacturers. The nutritional value of sour cream changes depending on the brand and the fat content. Ge

However, on average, one tablespoon of sour cream will provide:

What Are The Risks Of Giving Sour Cream To Your Dog?

Aside from potential lactose intolerance, the possible risks of giving sour cream to your dog are as follows (based on the nutritional facts):

It is not recommended that your dog consumes excess calories. This can result in extreme weight gain in your dog, which can reduce their lifespan.

Additionally, 90% of the calories found in sour cream come from fats, 60% of that is saturated fat. Saturated fat is not great to consume at high levels. It contributes to increased cholesterol levels, which increases the chance of cardiovascular disease in dogs.

A good rule to follow is letting your dog eat around 25-30 calories for every pound of their weight.

As mentioned above, fat in excess is not good for dogs. They are not used to high amounts of fats, and if they have a high-fat diet in excess it can cause a plethora of health issues, like pancreatitis, heart disease, plus others.

However, don’t think that fat-free sour cream is a solution! This type of sour cream contains tyramine. Tyramine  is bad for dogs because it is linked to IBS.

And, the flavor-boosting artificial gums found in fat-free sour cream can actually result in digestive issues for many dogs. So, it is better to avoid it.

For the most part, dogs do not have problems digesting lactose. However, there are some dogs that do, and consuming lactose is bad news for their stomach. It can cause vomiting, bloating, diarrhea, excessive thirst, dehydration, and more.

Sour cream is a dairy product, so it contains lactose.

Some dairy products, such as sour cream, contain artificial sweeteners in order to enhance the flavor. However, sweeteners can prove very deadly to our canine friends.

Xylitol in particular is very bad for them, and the sweetener that sour cream usually contains is xylitol.

If you suspect your dog to have xylitol poisoning, you must take them to see a veterinarian immediately.

Is There A Benefit To Feeding A Dog Sour Cream?

Sour cream is deemed to be relatively healthy for humans. If you are not lactose intolerant, the high-fat content of sour cream can give you energy and allow you to consume a trace amount of minerals such as sodium, phosphorus, iron, and calcium.

Depending on the brand of sour cream, you may also consume probiotics, which will help to soothe a bad stomach.

The same things can be said for a dog. However, the issue lies with giving them too much sour cream.

Should I Avoid Giving Sour Cream To My Dog?

No. You do not have to avoid giving sour cream to your dog. If you want to give your dog sour cream, then it should be done on rare occasions in small doses. Moderation is important here.

Think of the rule for treats. In general, a treat should not make up over 10% of a dog’s calorie intake, and this can also be said for sour cream.

So, if you have a small breed dog, then one tablespoon of sour cream on occasion is plenty. Bigger dog breeds can have up to three and be fine, but no more than that.

What Should I Do If My Dog Has Eaten Too Much Sour Cream? 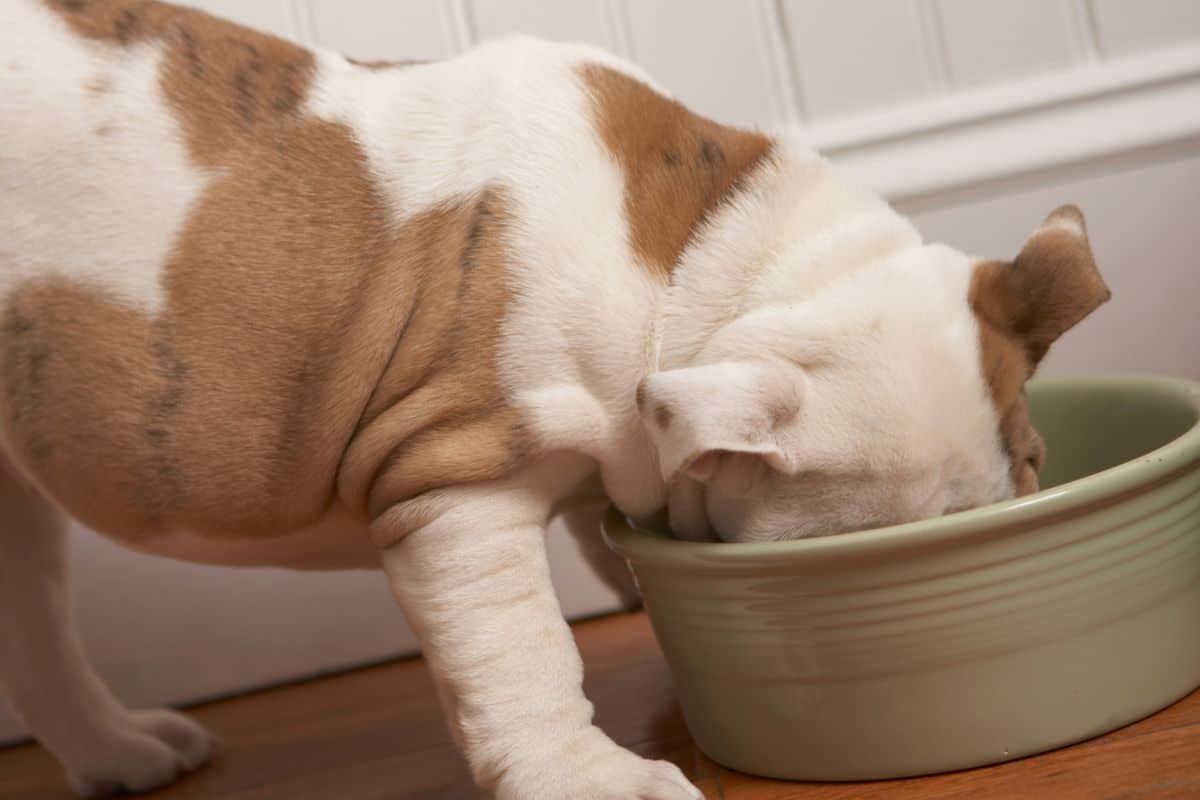 First of all, if your dog has eaten a lot of sour cream then you shouldn’t panic. Sour cream is not toxic to dogs, and there is no need to rush to the vet.

You then need to check to see if there is any sour cream left. If there is, take it away from your dog. Now, you need to keep a close eye on your dog for the rest of the day.

If your dog is lactose intolerant, then they may experience vomiting, diarrhea, and dehydration, as well as the other aforementioned symptoms. Generally, you do not need to worry about these symptoms because they will usually resolve themselves.

You can follow these steps to try and calm  the GI tract of your dog:

If you do notice any worrying symptoms, such as that of xylitol poisoning, then you should take your dog to the vet right away so they can get checked out.

The final thing you can do is more for next time. Try to keep your food out of the dog’s way, somewhere where they will not be able to access it.

Are There Any Alternatives To Sour Cream For Dogs?

If you really want to give your dog sour cream, then they should eat ones that are not heavy in fat. Because these are usually lower in fat and lower in calories, and generally higher in protein, they are the healthier choice for your dog.

Alternatively, you can try giving your dog plain yogurt. Plain yogurt can help aid a dog’s digestive system because it contains probiotics. Additionally, yogurt is even higher in protein when compared to sour cream.

So, not only will your dog find a tasty treat in plain yogurt, they will also find something that boosts their nutrition.

However, it is best to avoid giving your dog any dairy products if they are lactose intolerant.

Next, is kefir! Kefir is another dairy product that has been fermented. It is a great, healthy alternative to sour cream. Kefir, like yogurt, is more drinkable.

Additionally, you can try giving your dog some banana mash instead of sour cream. Bananas can be grounded until they are creamy and smooth,  which makes them a great alternative to sour cream.

Additionally, bananas contain plenty of minerals and vitamins that benefit dogs. However, like sour cream, banana mash can only be given to dogs in moderation because they contain sugars.

Finally, you can try giving your dog some dog ice cream! This is ice cream that has been made especially for dogs. They are similar to dairy products, but do not have the side effects. Your dog will love eating this on a hot, sunny day!

If your dog is not lactose intolerant, then it is fine for them to eat sour cream in moderation. Small breeds should have one tablespoon occasionally, while larger breeds can have three.

Sour cream can have some health benefits for dogs, especially if they contain probiotics, but eating too much of it can result in negative health issues for dogs.

We hope this article taught you everything you need to know about dogs and sour cream!