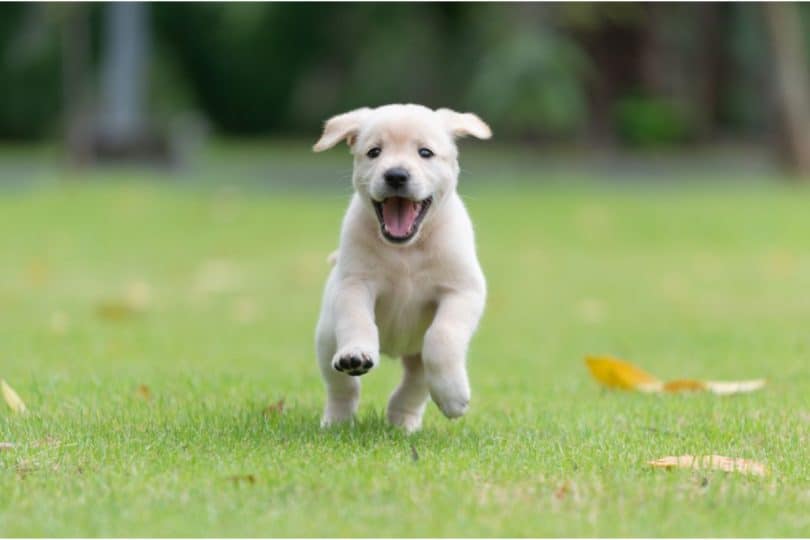 Having a spacious, landscaped yard is the perfect environment for your beloved pooch to run around and live its best life.

However, a large part of landscaping a garden involves mulch and some mulches can contain materials that are harmful to your dog.

Having these mulches in your yard can limit the enjoyment and freedom that your dog gets from the area.

In this article, we will look at some of the best dog-safe mulches that you can use in your yard to keep the space beautiful and protect your dog.

Dangerous Mulches For Your Dog

There are a few types of mulch that are much more likely to pose a threat to your dog’s health than others.

One of the most common types of mulch that is dangerous for dogs is a mulch that has been chemically treated or dyed.

These processes help to achieve a brighter color that is more aesthetically pleasing in your yard, prevents weeds from growing, and repels insects.

However, many of the chemicals that are used to treat these mulches are toxic for dogs.

If your dog runs over the mulch and then licks its paws, it could become very unwell.

If you do want mulch that has a vibrant color but is also dog-friendly, cedar mulch is a great option.

Eucalyptus mulch is a very popular option when people are landscaping their gardens.

It possesses a pleasant smell and has natural insect repellent properties.

Unfortunately, the bark and the leaves are extremely toxic for our four legged friends.

If your dog ends up ingesting some of the bark or leaves, it can result in diarrhea, vomiting, and other serious health issues.

There are other mulches available that also feature pleasant scents and insect repelling properties that work just as well and are dog safe.

Also, eucalyptus can be very expensive and difficult to get hold of in the states anyway.

Similarly to eucalyptus mulch, cocoa bean mulch features an incredibly sweet and pleasant odor which makes it a very popular choice among gardeners.

However, because this mulch is derived from cocoa shells it is toxic to dogs.

The beans that are used to create the mulch include the same ingredient, theobromine, that makes chocolate toxic to dogs.

The worst thing about using cocoa bean mulch is that the sweet smell makes it incredibly tempting for dogs to try and eat it.

If you are on a budget, using mulch that has been made from salvaged wood might be tempting as it is among the cheapest options available.

However, because it is impossible to know where the wood came from, what type of wood has been used, and what it may have been treated with previously, there are too many unknowns to make it safe for your dog.

Pine bark mulch is made from shredded or chunked bark from the pine tree.

Pine bark is a popular mulch thanks to the natural red-brown color that it comes in.

The color of the mulch is great for most garden palettes. Best of all, this mulch is perfectly safe for your furry friend.

This mulch is also incredibly easy to come by in the states.

Pine trees are prevalent across the US and are easily replenished because they are fast-growing.

This means that pine mulch is not only incredibly affordable but it is also a brilliantly sustainable option.

There are a couple of downsides to using pine bark mulch though.

It is often easy to wash away in the rain which should be considered if you live in a wet climate.

It is also more acidic than other options which can affect your plants and how they grow.

Cedar mulch is made from chunked bark from a cedar tree.

Typically, this mulch isn’t treated with any harsh chemicals which makes it perfect for yards that have four-legged friends and small children in them.

However, there are some dyed varieties that you can get so you need to be careful when buying this type of mulch. 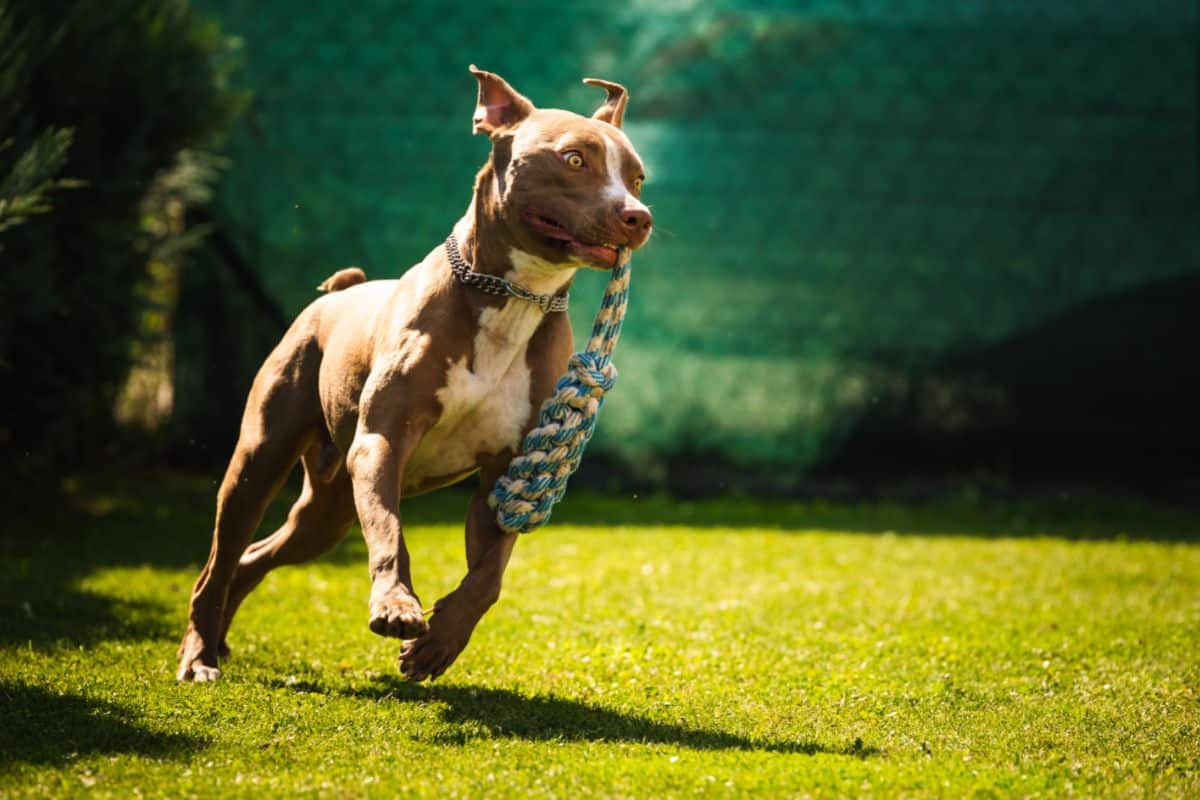 If the mulch you bought is dyed, it is probably not dog safe and therefore, shouldn’t be used in a yard with a dog.

Cedar mulch is one of the more expensive types on the market, this is because it is harder to come by as the trees are not fast-growing.

The natural color of the mulch often fades quite quickly which can be disappointing, especially if you have bought it specifically because of the color.

Cypress mulch is made from the bark and shredded wood of bald and pond cypress trees.

These trees are harvested from the southern US and grow at quite a fast rate which makes it a great option for mulch.

The mulch from a cypress tree is soft and features a natural pleasant scent which can draw people to choosing it for their garden.

This mulch also has some natural, insect repellent properties that are perfectly dog-friendly.

One downside of this mulch is that it can attract termites which can be a nuisance in a domestic garden, especially if you have a dog that could bring them inside your home.

Cypress mulch also doesn’t allow a lot of water to be absorbed into the soil which can affect your plants.

It is also not one of the most eco-friendly mulches available on the market as the process of creating the mulch isn’t overly sustainable.

The natural color of this mulch also fades quite quickly which can change the aesthetics of your yard.

It also leads to some companies adding artificial dyes to their mulch that may not be dog-friendly.

Remember to always check the packaging and company information to ensure that no dyes or chemicals have been added to the mulch.

Coco mulch is made from the husks of coconuts. It is incredibly important that you make sure not to confuse coco mulch with cocoa bean mulch.

The latter is incredibly dangerous for dogs whereas the coco mulch is perfectly safe for your furry friend.

This mulch is significantly lighter than other wood-based mulches.

Other than the fact that this mulch is completely dog-friendly, coco mulch makes a popular choice for gardens due to its benefits for the soil and plants.

Coco mulch is great at retaining water which can help make sure your plants are hydrated.

It is also effective at draining when necessary to avoid a flower bed becoming bogged down with water.

Coco mulch is significantly more expensive than most other mulches on the market but it can be worth it in terms of its dog-friendly nature and its soil care properties.

With that being said, coco mulch does contain less nutrients than a lot of other mulch varieties which can be a deciding factor in your mulch choice.

Pine needle straw mulch isn’t an option that most people think of when they are researching different mulches for their yard.

However, it can be a great dog-friendly option with some caveats.

Pine needle straw is a great option for mulch in a yard that has a dog as long as the dog isn’t prone to eating things that it shouldn’t.

The pine needles provide a high volume of nutrients to the soil that can really help your plants to thrive.

However, for certain plants, the pine needles can make the soil too acidic as they break down over time.

It is important to research whether your plants will be able to handle acidity before committing to this or any other mulch.

The soft red-brown shade of this mulch can be a beautiful addition to your garden.

Pine needle straw mulch is also one of the most eco-friendly, sustainable mulches that you can get with one of the smallest carbon footprints.

Unfortunately, this mulch can cause harm to your dog if it is ingested, therefore, it is only a good option if you can guarantee that your dog will not ingest any of it.

It is also quite an expensive mulch to purchase and doesn’t possess any natural insect repelling properties.

Fir bark mulch is made from the wood and bark of a conifer tree.

It offers incredible, natural water-resistance and weed repellent which makes it a great option for gardeners and dog owners.

Fir bark mulch is cut a lot bigger than other mulches which means that four-legged friends are less likely to be tempted to dig through it.

Although, any stick-locking dogs may be tempted to occasionally steal a particularly attractive piece to chew on.

Fir bark manages to stay in place a lot better than some other mulches on the market which is great if your beds border your lawn.

The soft, natural color is completely chemical free and this mulch lasts longer than a lot of other mulches such as traditional wood chips.

This mulch is a lot more expensive than many other mulches which can be off-putting for people.

Also, the larger pieces can be tempting for dogs that like to chew which can increase the risk of picking up a mouth injury, especially when unsupervised.

Finally, rock and stone can be a great option for use as a mulch.

Rock is the most long lasting of all the mulches and can provide coverage for your plant beds for years to come.

The rocks or stones also help to prevent weeds from growing in your soil naturally.

The best thing about using rocks or stone as a mulch is that they aren’t often targets for curious or cheeky pups.

However, there are some exceptions to that rule and if you know that your dog is prone to eating stones, this isn’t a good option for you.

There are many mulches that can be incredibly dangerous for your four-legged friends and should be avoided at all costs.

However, there are even more mulches that are perfectly safe for your dog and the rest of the family.