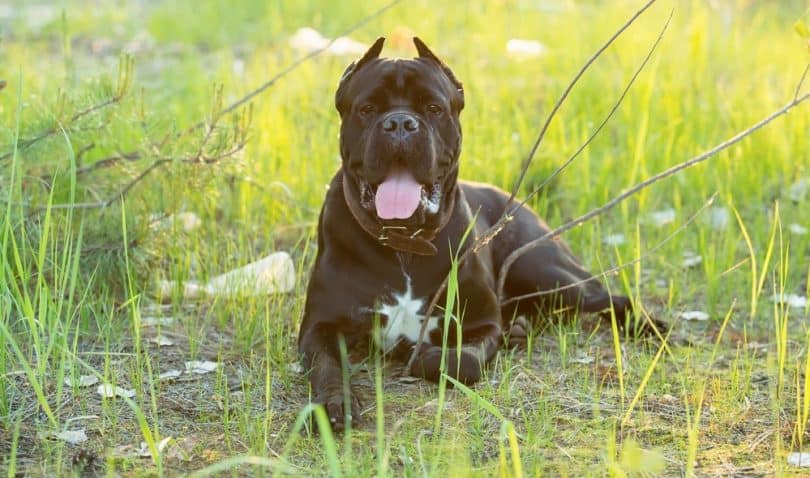 It’s a personal choice for Cane Corso owners to have the dog’s ears cropped. Cane Corso ear cropping is standard practice and it may be done for appearance or other reasons.

Looking back on the breeding history of these dogs it’s only the natural thing to do. Why? Cane Corso dogs don’t have naturally floppy ears – these were bred into the dogs over many centuries.

So, cropping these dogs’ ears is an attempt to restore the breed to its natural state in terms of how the ears appear.

What does cropping the ears mean? Cropping involves cutting off the floppy part of a dog’s ear, also called the ear pinna. The purpose is for the dog’s ears not to hang down but to stand up.

Ear cropping is generally done so the ears stand up, and the effect creates a standard look for some dog breeds, such as the Doberman Pinscher. This is a controversial topic with proponents for and against the practice.

At What Age Can You Crop Your Cane Corso’s Ears

Breeders usually crop puppies’ ears when they are between 8 and 15 weeks old. Companion dogs that will be sold, don’t have their ears cropped by the breeder, that is left up to the owner to decide and arrange.

Puppies don’t have their ears cropped before they are eight weeks old. If cropping is left too late, the ears won’t stand up because the cartilage have softened.

At any rate, most vets recommend having the procedure done before a dog is 12 weeks old but after seven weeks of age.

The appearance of a Cane Corso’s ears depends on whether the dog’s ears have been cropped or not. The two states give a completely different appearance. 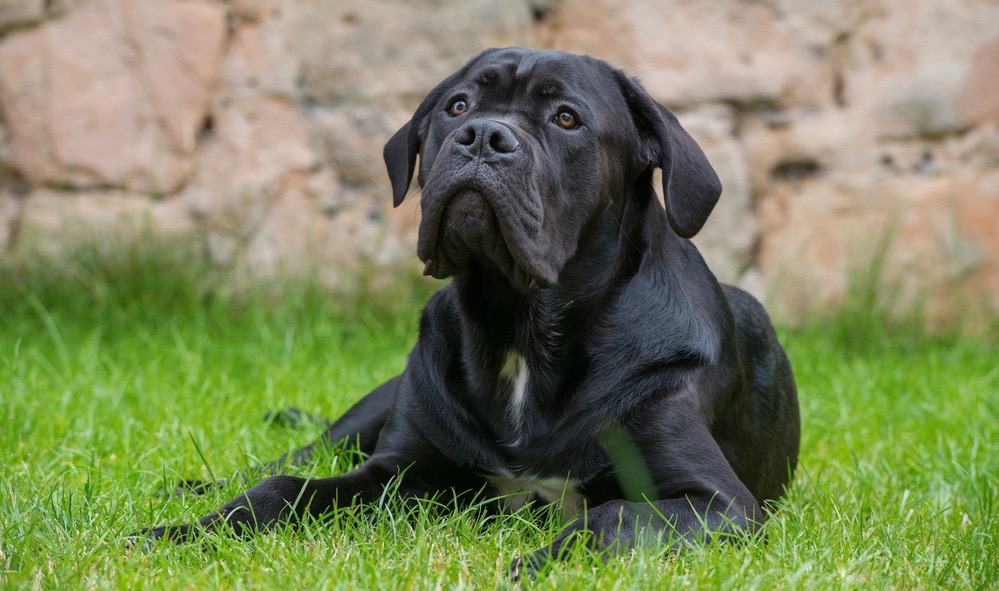 A dog whose ears have not been cropped, sports floppy ears that give the dog an adorable, friendly look. These dogs look more approachable.

Most people prefer the impressive look that cropped ears give this breed. Or at least, they are more impressed by the look.

There are several reasons for cropping a Cane Corso’s ears, including cosmetic and practical reasons.

Many people have their dog’s ears cropped because they believe it enhances the dog’s looks. Cane Corso dogs have a naturally square face that makes them look quite formidable. When they have their ears cropped, this look is emphasized.

These dogs were traditionally taken hunting with their owners. During these excursions, the dogs often got their floppy ears caught in brambles and thorn bushes, so owners began to shorten their ears.

These days, owners still have the ears cropped to protect the dog against injuries since these are high-energy dogs that can easily get into scraps with other dogs and have their ears torn in the process.

When this happens, or if the dog has repeated infections, it can lose its hearing. Uncropped ears in themselves won’t cause ear infections, but it might be more difficult to notice. With ears that are cropped short, it’s highly unlikely that an ear infection will go unnoticed.

Note, according to the American Veterinary Medical Association, it’s inaccurate to claim that Cane Corso ear cropping has a medical purpose like preventing infections.

Hanging ears create a dark and warm environment for mites, ticks, and bacteria to thrive in. Keeping the ears short creates a light and dry environment that’s likely to keep these pests at bay.

It also creates an environment that’s easy to inspect at a glance, so any critter hitching a free ride can be gotten rid of quickly.

Is It Cruel to Crop Cane Corso’s Ears?

Ear cropping, like tail docking, is highly controversial. Many countries have banned the practice as it is deemed cruel and unnecessary. Cropping a dog’s ears interferes with its well being in a number of ways.

Dogs communicate with their ears, just like they do with their tails. When their ears are cropped very short like the battle crop style, the ears become useless for communication.

Ear cropping is painful. The procedure requires anesthesia to put the dog out, otherwise it won’t be able to lie still.

Afterward, painkillers are often prescribed as owners have noticed their dogs crying out when its ears are accidentally touched by someone or something. Just because dogs can’t say that they hurt, doesn’t mean that they don’t.

Cropping of ears is not without risk. The procedure requires anesthesia, and some dogs are sensitive to the drugs, which may cause complications. As with all surgeries, success is not guaranteed.

After surgery, the dog’s cropped ears could become infected, which could lead to complications. Other post-surgical risks include profuse bleeding and pain.

According to a 2016 study, tail docking and ear cropping have a negative impact on how others perceive these dogs and their owners.

Ear cropping is a simple procedure. The dog is sedated, and the area around the ears is anesthetized, so the dog doesn’t feel anything. Under sedation, the ears are cropped and the cuts are stitched.

The vet attaches the remainder of the dog’s ears to a splint or other hard surface to guide the ears upright. The procedure takes about 15 minutes. 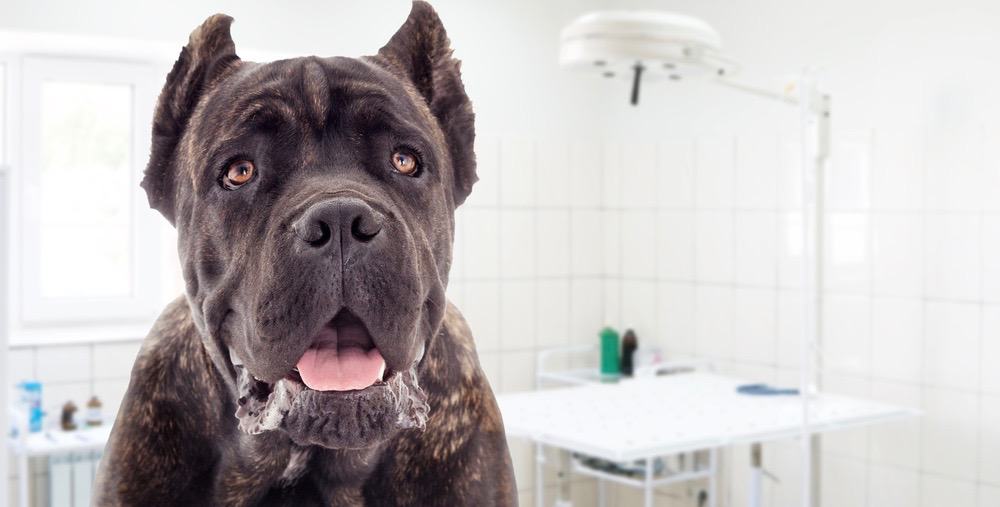 Afterward, the owner must constantly monitor the bandages, which may need weekly changing. The bandaging and the wound may cause the dog discomfort and it will try to get rid of the bandage by shaking its head.

The owner must keep the ears taped so they will be upright after the healing process.

The battle crop is the shortest of the crop styles and makes the dog appear severe, unfriendly and aggressive. It is also the style that leaves the dog’s ear open to the air and any insect that wants to explore its ears. Some owners have found that this style leads to infections, yet it’s a very popular style.

Many owners go for the show crop. It is not too short and makes the dog appear in a constant state of alertness.

The short crop is a combination of the battle crop and the show crop and is a good choice for a Cane Corso.

Consult some pictures online to help you decide which crop you want for your dog – the shorter ones make dogs look more aggressive.

Once you’ve decided what crop you want for your dog, have a picture of it with you when you go to see the vet. Keep in mind that the vet might not be able or willing to do the crop of your choice.

It can be a problem to find the right vet to do ear cropping on a dog as many of them refuse to perform the procedure because they see it as unnecessary. Some vets also do only certain crops styles.

Since this procedure will determine what your dog will look like for the rest of its life, finding a vet that will do a good job is an important decision. 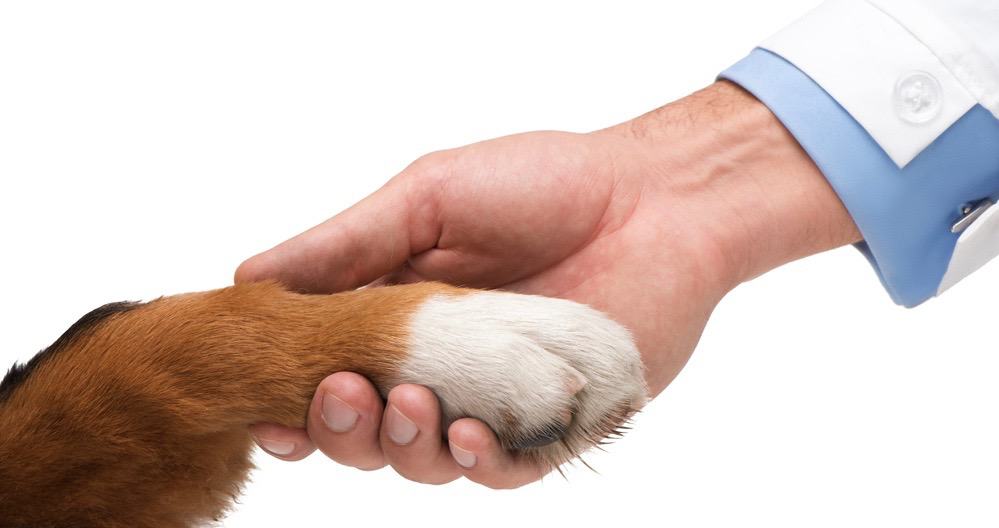 You may be able to find a vet that crop ears, but what you need is a vet who is familiar with Cane Corso dogs and have experience performing the procedure on them.

The best way to make sure that the vet you choose is good at cropping the ears of Cane Corso dogs, is to ask for photos that show adult Cane Corso dogs whose ears were cropped by the vet. Alternatively, you can ask a breeder who they use to do their dogs’ ear cropping.

It is common practice to have a dog’s ears cropped between 7-12 weeks of age. Most people believe that the ears won’t stand up if the procedure is not done at a young age,

Some vets will do an ear crop when the dog is older and others won’t. The fact is, a dog’s ears can be cropped at any age, but some vets won’t do it after the dog reaches a certain age.

Age doesn’t seem to be a make or break factor when it comes to ear cropping. If your dog is four months old and you suddenly decide you want its ears cropped, you could probably go ahead and have it done.

The US has passed no law against ear cropping. There is also no law that regulates the practice.

Ear cropping is illegal in many countries, including the UK, Australia, New Zealand, Scandinavia, most of Europe, and some parts of Canada.

The American Kennel Club (AKC) states its policy on the issue as follows: “The American Kennel Club recognizes that ear cropping, tail docking, and dewclaw removal, as described in certain breed standards, are acceptable practices integral to defining and preserving breed character and/or enhancing good health. Appropriate veterinary care should be provided.”

The American Veterinary Medical Association (AVMA) is against ear cropping and tail docking of dogs when done solely for cosmetic purposes and wants it removed from breed standards. It considers the procedure medically unnecessary. Also, the AVMA states: “… it cannot be assumed that ear cropping has a medical purpose.”

A Cane Corso without cropped ears will end up having floppy ears that hang down on each side of its head, not unlike a bloodhound.

This look gives the dog a friendlier appearance, preferred by some owners.

The cost to have a dog’s ears cropped can vary considerably, with some vets charging as much as $800. The average is somewhere between $150 and $600, with many people ending up paying $250, which is considered a fair price.

This price should cover everything, the procedure, all medications, and the follow-up visit.

When choosing a vet, don’t make your decision based on price. Paying more doesn’t mean you’ll get the best service. Rather search and pay for a vet that has a proven record of successful ear cropping.

To ensure your dog’s successful recovery, you need to follow the vet’s instructions and monitor your dog after the operation. For instance, you’ll need to change the bandages at least once a week. It can take 4-8 weeks for your dog to recover fully.

Grooming your Cane Corso can be a battle since these dogs are very active and don’t like being groomed. For this reason, you must train your dog from an early age for grooming, otherwise you will have a hard time when you want to clean its ears when it’s fully grown.

A Cane Corso needs a bath every 4 – 7 weeks. You can do the ear cleaning when you bathe your dog. For this purpose, use veterinarian-approved ear-cleaning solutions.

Have treats ready when you’re ready to clean your dog’s ears so you can reward him when he sits still. When he’s calm, drip the ear-cleaning solution in your dog’s ear until it fills the ear canal. Then gently massage your dog’s ear for half a minute and then let your dog shake his head to get rid of debris. Afterward, wipe the ear clean using a cotton bud.

Ear cropping is entirely up to the dog owner’s discretion. There is no proven medical reason to have it done. It seems that dogs are put through this process simply to alter their appearance for the pleasure of the owner.

Now, since the dogs are anesthetized and can receive painkillers afterward, this practice cannot be said to be cruel. However, it is unnecessary and can cause a dog considerable discomfort, including an infection.

The practice does, however, affect a dog’s quality of life. Dogs use their ears to indicate to people and other animals how they feel.