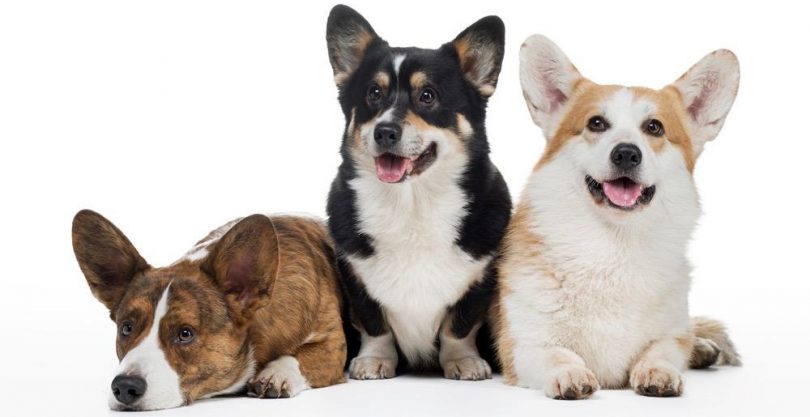 The American Kennel Club recognizes the following colors for Pembroke corgis: back & tan, sable, red, and fawn with white markings. 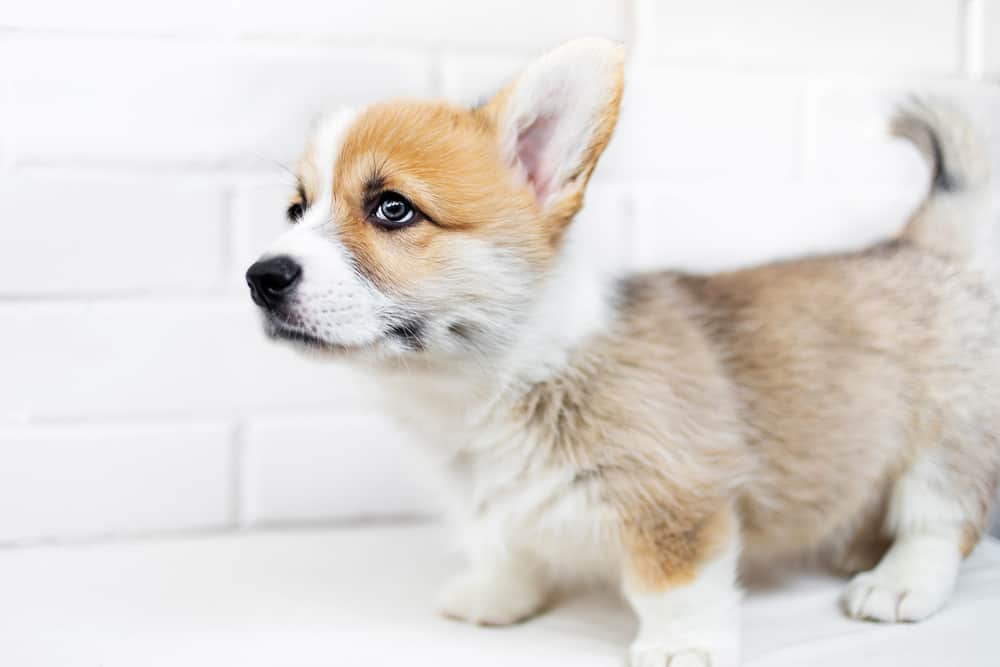 Sable is a unique color in the sense that it is actually three colors mixed together: red, brown, and black. These dogs show a black cast over the shoulders and back, but can also have a black cast on the withers, tail, and head.

Sables often have something that is called a widow’s peak, which is a black marking that arches over and between the eyes, accentuating the eyes and sometimes giving the impression that the dog is wearing goggles.

In some dogs, the red sometimes appear more brown and chestnut in color. 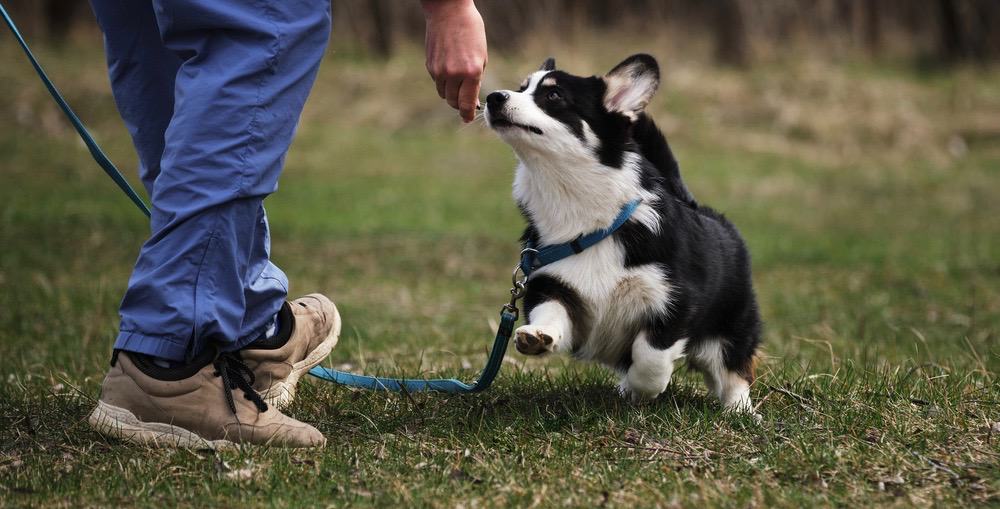 The black-headed tri color gives the dog a distinctive appearance, the main feature being a distinctive white line down the nose that ends up covering the muscle. The head is always black, as are the back and the outside of the ears, the top of the head, and around the eyes.

The coat also has some red or tan spots, but the undercoat and paws will be mostly white.

are covered with mostly white fur 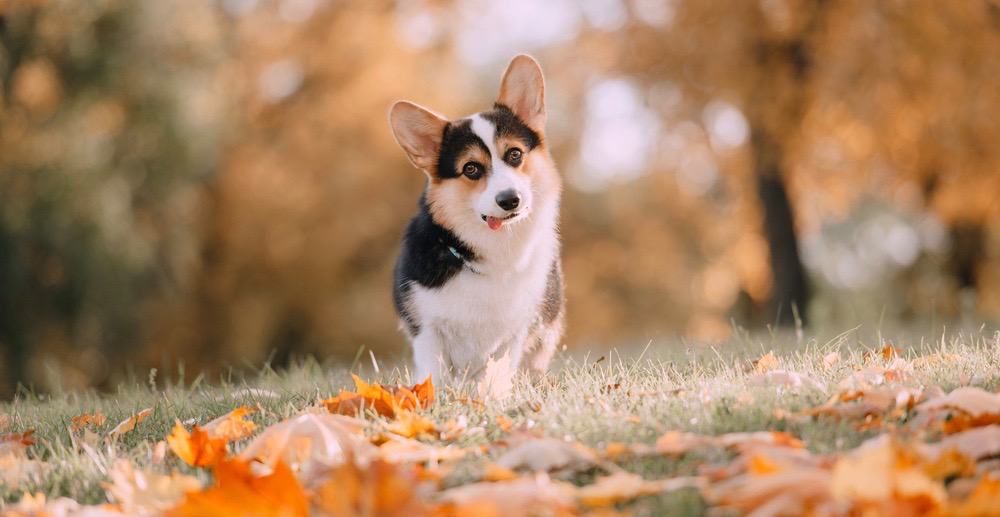 With these dogs, the three colors clearly reside each in its place: the back is black, the head is red and the chest, underbelly, and paws are white.

The dog may also have large patches of red on the upper legs towards the back, but the majority of the dog’s fur is black. The muzzle is white with the white going all the way down the chest and under the belly.

The red fur on the face may have a slight black cast. 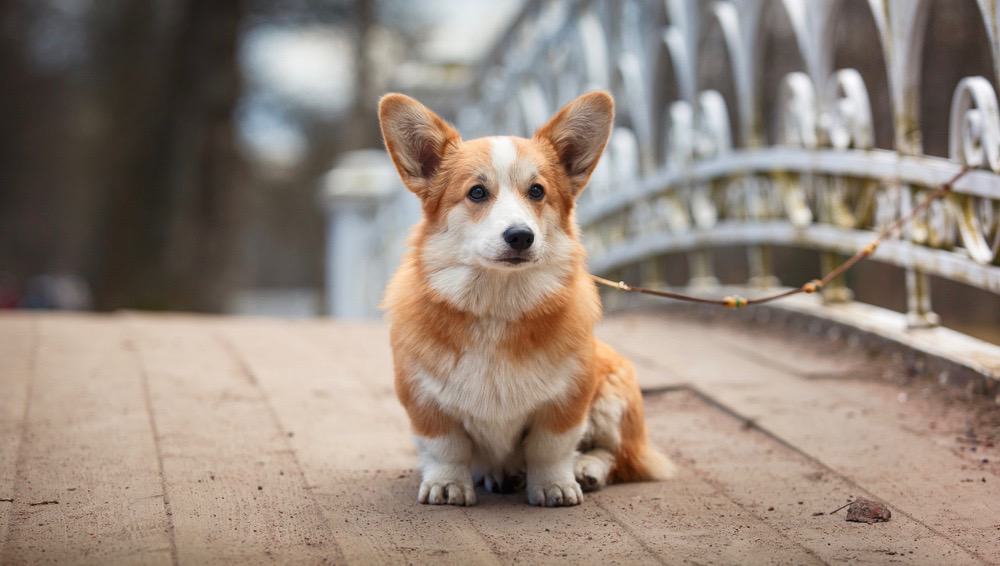 The red Pembroke Welsh Corgi only features two colors: red and white. The red can vary in intensity, from a deep red to a lighter red, also called fawn.

These dogs have a predominantly red coat with a white muzzle, and the white extending to the chest and the underbelly, and the paws. The rear can also be white with red blended into it. 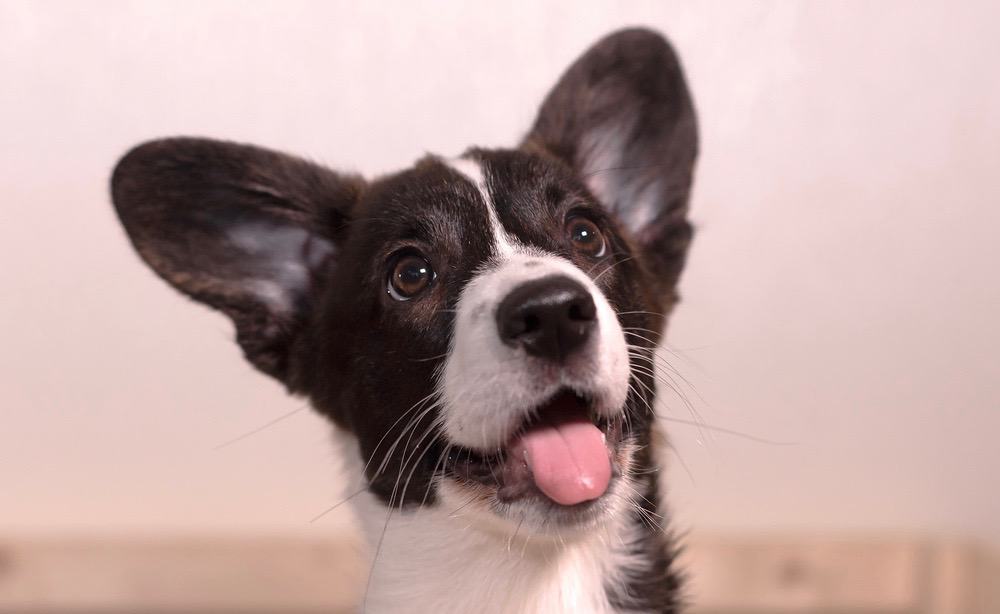 A black & white Cardigan Corgi has a predominantly black coat with large white marks over the body. The muzzle is white as is the tail and the underbelly. The coat can also have some tan spots anywhere on the body. 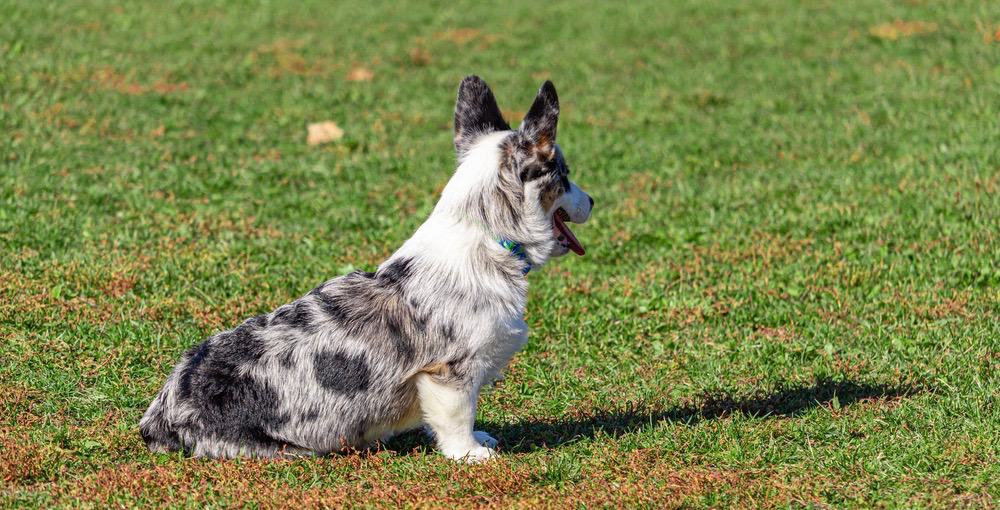 Merle is a term used to describe a color combination in the coats of dogs. It comprises a solid base color like black, red or brown, with lighter patches in blue/gray or red.

The overall look is a marbled or streaked effect, with odd markings all over the coat. This is an unusual coat that’s not always attractive. 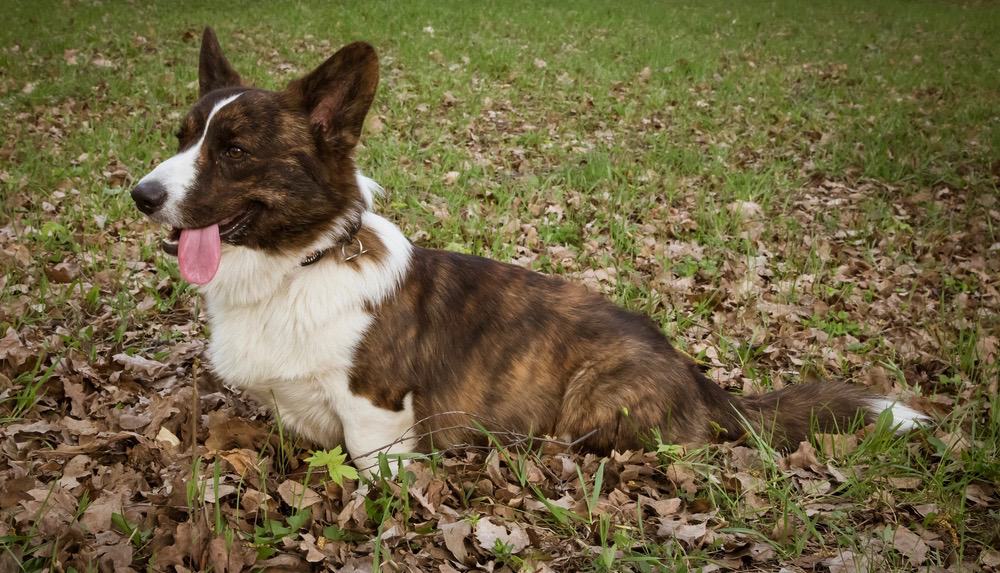 Brindle gives a stripe-like appearance. Usually, the coat is a solid color with the brindle appearing as darker, uneven streaks on top, much like the coat of some hyenas.

In brindle & white corgis, the base color may be red, back, or yellow. The chest, underbelly, and paws are white. 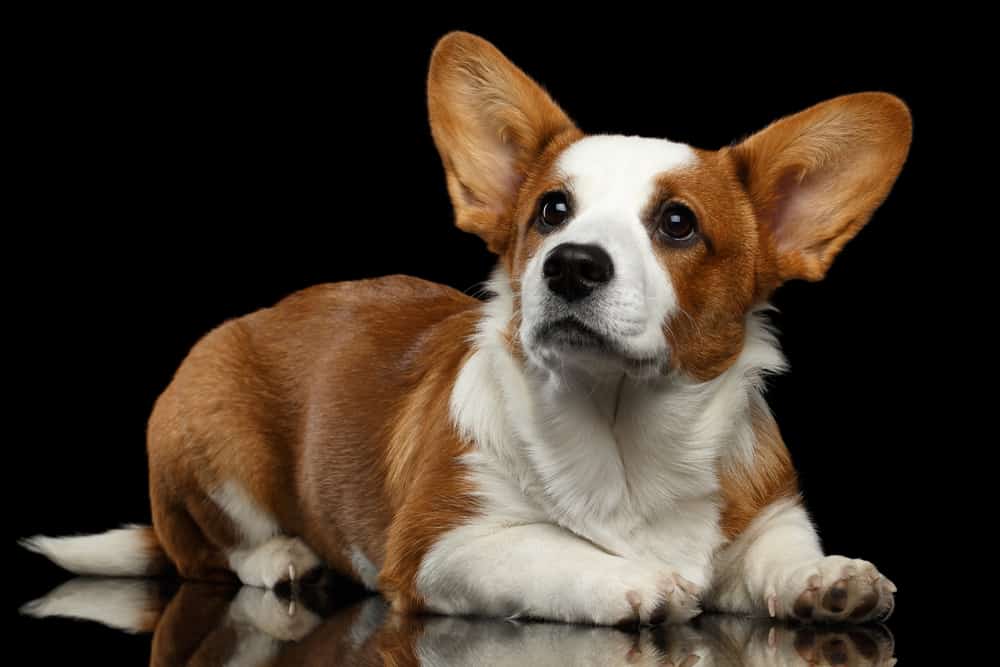 Just like the Pembroke red, the red Cardigan Corgi only features white and red, and the red can range from deep red to fawn and light fawn.

Most of the coat is the red shade with the white running from the muzzle, down the chest, and under the belly. The paws and tip of the tail are also white. 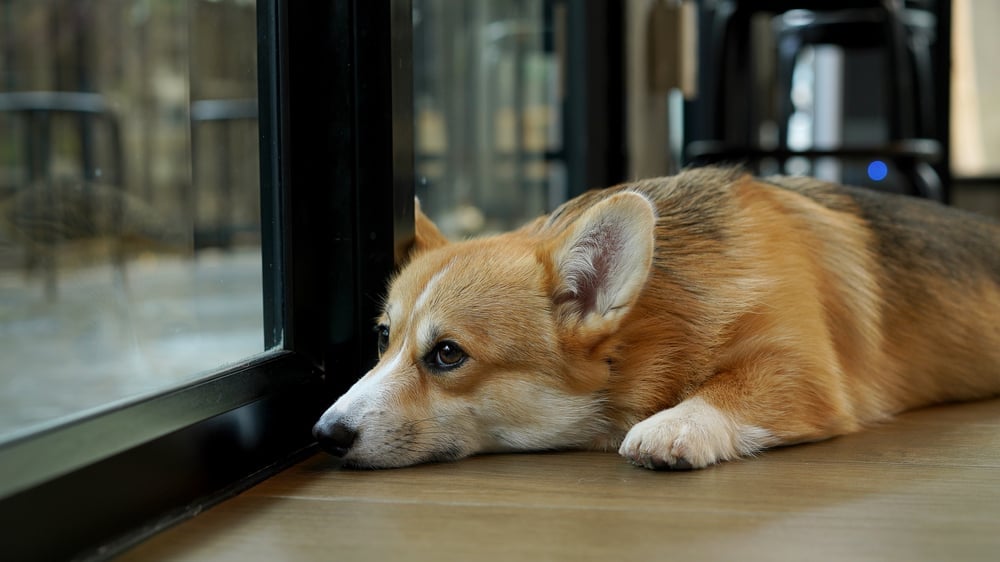 The main colors on these Corgis are sable and white but, the coat may or may not feature red or black markings. They can also have the widow’s peak, and their coat can show black tipping on the shoulders, back, and top of the head.

The underbelly is white and the paws may be white or sable.

According to the American Kennel Club (AKC), the markings for the Cardigan Corgi are:

According to the AKC, the Pembroke Welsh Corgi only have white markings.

The markings are quite interesting. The black mask marking looks like a black mask on the dog’s face. Tan points are quite common and can be seen on different parts of the dog’s body, especially the eyes.

Brindle points are actually not points at all – they are attractive, uneven stripes that run across the coat. Ticked markings are small spots that are visible on the white part of the coat.

White markings, also called white spotting, are not actually spots – they simply are white areas on the dog.

What Is The Most Common Corgi Color?

To meet Pembroke’s breed standard, any shade of black and tan, red, sable, and fawn, with or without white markings will do. 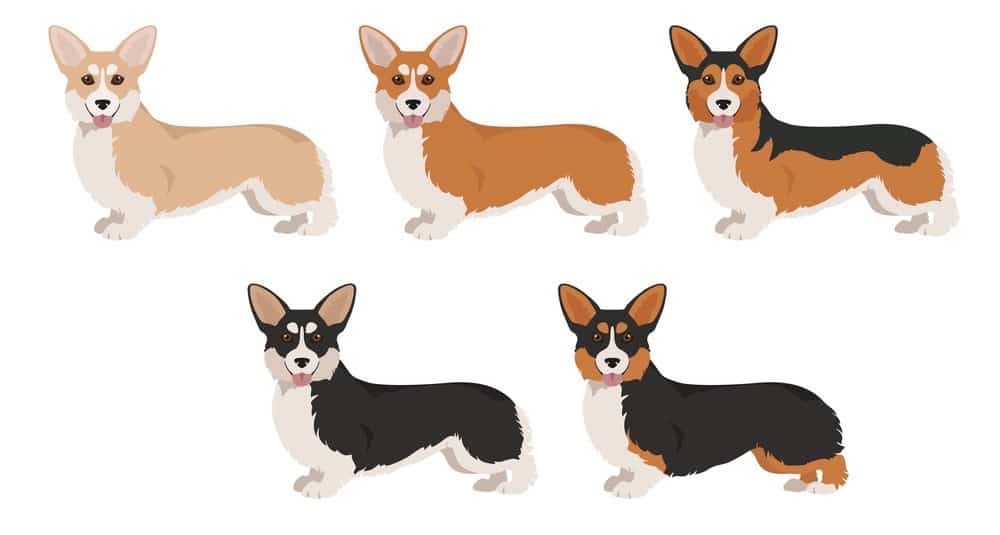 The red and white Pembroke is the most common color combination, with the red varying in depth from dog to dog.

Often times puppies have some black markings but these disappear as the dog matures.

Sable is a very unique color for Corgis. Sable combines black, white, and red, with the red varying in depth.

A sable-coated Corgi will have an attractive black cast on the back, withers, head, and tail. On the face, the black cast will show as a widow’s peak.

The inside of the dog’s ears may be a light color or red and white running together, with the ear having a lovely thin black line on the edges.

The black cast on the red coat is very attractive. The chest, underbelly, and paws remain characteristically white.

The Corgi has a medium-dense double coat that needs to be cleaned every six weeks for the most part of the year. However, during shedding season, in spring and fall, your dog needs to be groomed more often.

Give your dog a bath every 4 – 6 weeks. Use warm, not hot, water, and make sure you use a good quality dog shampoo and conditioner. 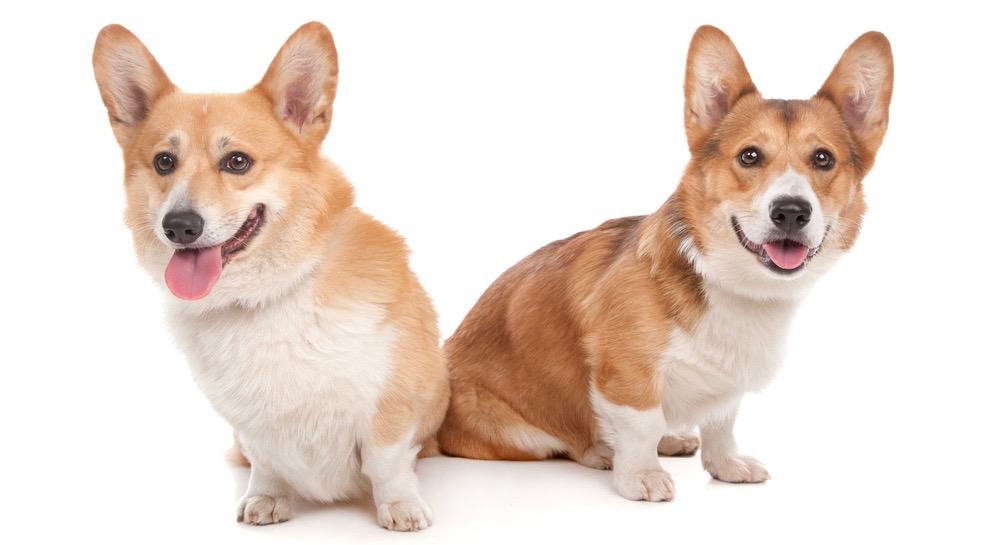 When you’ve finished bathing your dog, dry his hair carefully, so it doesn’t tangle, then use a comb to comb out its hair.

It is recommended that owners brush their dog’s hair once a day to get rid of dead hair. This can just be a light, quick brush to keep things under control. A proper brush is only needed about three times a week.

Do Corgis Shed A Lot?

Corgis have a double coat, with a short undercoat and topcoat that is thick and long. These dogs shed all the time with heavier shedding during spring and fall.

You have to stay on top of the falling hair otherwise, your floors, furniture and your clothes will be covered in hair. If you plan to welcome a Corgi into your home, plan on brushing its coat at least once a day, especially in the spring and fall seasons.

Daily brushing and regular bathing will help you to keep the falling hair under control.

Do Corgis Change Their Coat Color As They Age?

A Corgi puppy’s coat color is a thing of miracles: it looks like one thing now, and in a couple of months, it has changed noticeably.

A Corgi puppy doesn’t look the same by the time it’s an adult dog, and it’s not always possible to predict what a puppy will look like once it’s an adult.

A puppy can be born with a black and white coat and develop red markings once it matures. 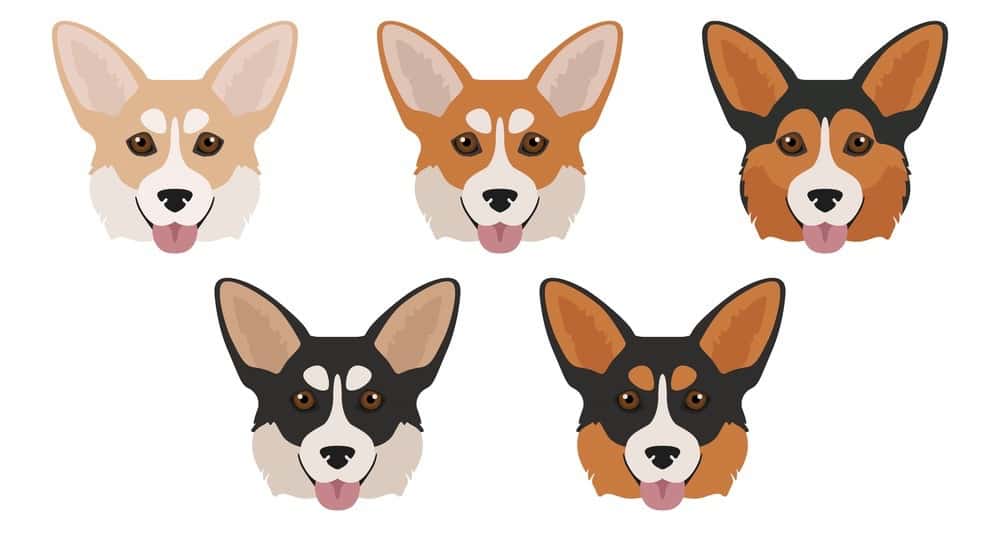 A puppy can start out with light black hair over the body that turns red in adulthood and with no widow’s peak, yet develop a widow’s peak as it gets older.

The markings can stay the same in shape but change in color, for instance, a fawn that changes to a deep red.

A puppy can also look like a common red and white Corgi and end up as a sable Corgi with attractive black casting on the back. Anything is possible!

Corgis are attractive little dogs with a lot of spunk and personality. They have a double coat which means they shed quite a lot.

There are two breeds of which the Cardigan corgi is rarer and therefore more expensive. They are also slightly heavier than the Pembroke corgis. The Cardigan corgi coats come in an astonishing range of colors, including the rare merle blue.

All the coats for both the Pembroke Corgi and the Cardigan corgi have white in them, but a coat that’s mostly white is not acceptable.

If you plan to participate with your dog in dog shows, consult the American Kennel Club for breed standards to be sure which color coats are acceptable. Of course, to all corgi lovers, there’s no such thing as an unacceptable corgi coat color!