Although they are among the American Kennel Club (AKC) working group, few breeds of dogs have balanced the personality and temperament of a Boxer.

They are courageous and energetic as well as fun-loving. They are good for families but can also do well for single dog owners.

If you are interested in owning a Boxer, you may be interested to know about Boxer colors and markings. The formation of Boxer colors derives from their ancestors, who pass down genes both undesirable and desirable to the next generation.

However, as breeding has become increasingly commercialized, Breeders suppress undesirable genes and keep desired traits by selecting meritorious individuals repeatedly to be the parents for the next puppies.

This will generate a population that expresses a combination of characteristics that stand out from other dog breeds.

This article will explain all the key information you need to know about Boxer colors, markings, and pictures.

This is one of the purebred Boxer colors. Fawn Boxers have a solid color, yellow to sleek brown to dark reddish coat.

However, sometimes they are fawn with white markings. The white marking can be on their necks, paws, chest, or their face while the black mask is seen on their muzzles. An all-fawn Boxer dog is accepted in the show ring.

This type of color is also popular. However, it is not exclusive since it is seen in Pitbulls, French Bulldogs, and many others.

Brindle is not a color but a coat pattern. Their base coat is fawn-colored. Their uniqueness involves a black-colored striping that almost looks like a tiger.

Brindle Boxers have a lot of variation because their stripes vary in the degree of black. Some are darker while others are lighter, thin, or thick.

Examine their parents to get a sense of stripe coloring and density. Some of their stripes are so dark making the Boxer look like a black dog while those with light stripes look like fawn Boxers.

The beauty of the brindle Boxer is clear when contrasted with white markings. The dark coat color pops well against the light. However, the AKC standard for this breed has a limit of up to a third of it. A little white on the face is okay as long as not in excess. 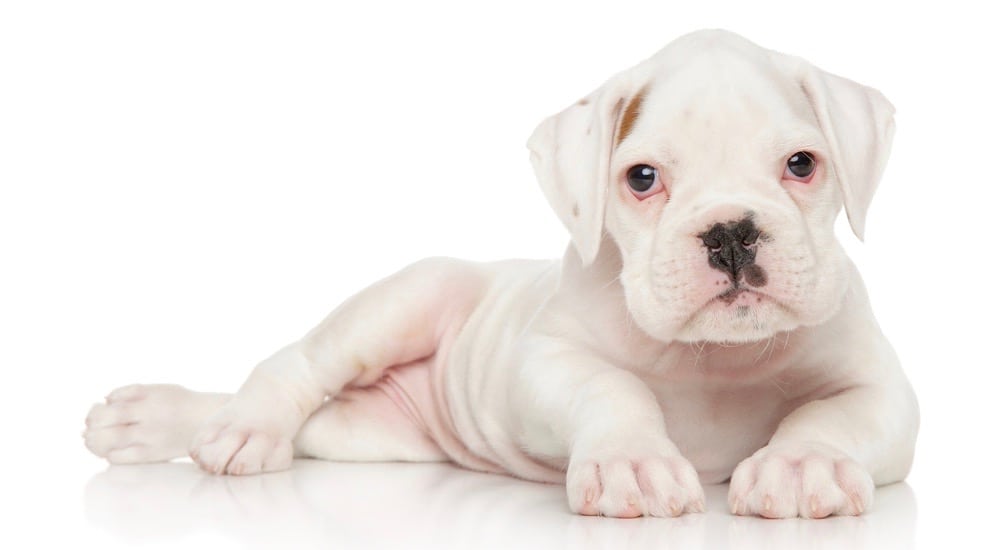 This is not a standard US color among the three possible colors for purebred Boxer. It is recognized by the AKC; however, they are fairly popular and 25% of the Boxers in the US are white.

These colors are considered appealing and unique; hence they will continue to be bred. When most of the Boxer body is white the dog is then called a White Boxer.

White Boxers have not been officially standardized by AKC. Dogs that contain more than a third of the white covering on their bodies are disqualified from dogs’ shows by the breed standards and are also not allowed to be bred by the parent club code of ethics.

However, this color has been with this breed for years and was accepted as part of the standard.

In 1925, the German Boxer club sector banned this color citing it could not fit the standard for merely a cosmetic reason then it has been followed by heated controversies among breeders and in the show ring. 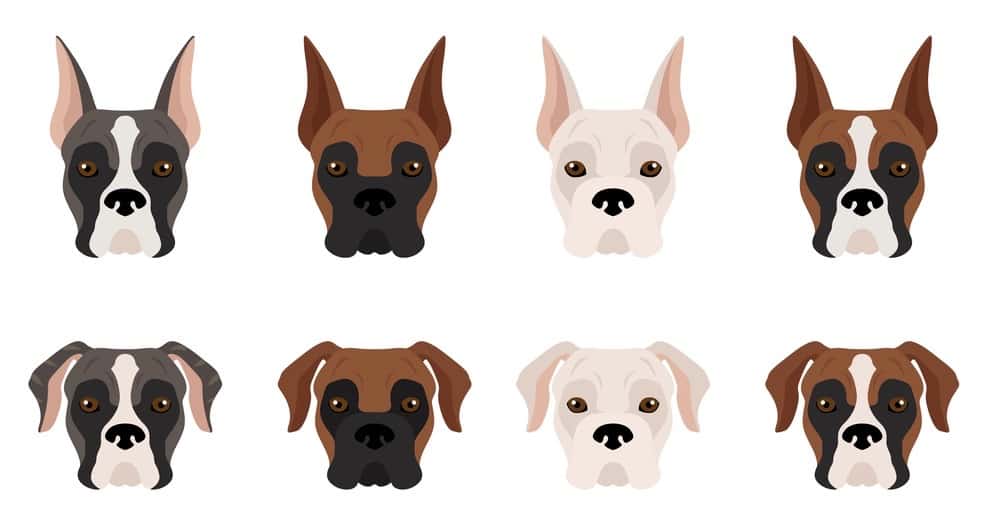 Most Boxers have a black face mask that reaches beyond the muzzle. This is an iconic feature in most Boxer dogs because it is a big patch of black fur on the dog’s face.

This mask occurs around the eyes but is usually over the snout. The black mask is a standard characteristic of most Boxers. It is absent in white boxers and can also be hard to see in black Boxers.

Fawn Boxers are widely known for their brown sleek coat with black masks and white markings. The combination of the white coat with white markings on the limbs, chest, and belly makes the dogs look very cute.

The markings on a white boxer are more unpredictable than it is with a Brindle or Fawn boxer. There is a lot of color variation.

Some have pure white markings while others have brindle markings. Fawn Boxers have a darker shade than usual which is a common marking.

White Boxers normally have an eye patch, where there is a color around a single eye. Some also have a single-colored ear. However, the color marking depends on the dog and percentage in this case.

Brindle boxers have a typical black mask on their muzzle with white markings on the paws, chest, ankles, and face. Other brindle Boxers can have only the black mask with no white marking.

However, these marking combinations along with their brindle color are recognized officially and considered standard.

Brindle color is the second most popular Boxer color choice. What is fascinating about this is that it is not a color but rather a coat pattern.

Brindle Boxers have a Fawn color base coat with unique black colored striping. These stripes vary in degree of black, dark or light, thick or thin.

Fawn Boxers commonly have a sleek brown coat with white markings around the chest, paws, neck face, and black mask on their muzzles. This color is well known and incredibly attractive in the dog community.

Restrictions of the fawn white markings proportion are equal to those of brindle boxer, that the main goal is to keep the exact look that the breed has. However, fawn boxers tend to have more white on the chest and legs compared to other types of Boxers.

There is a popular belief that White Boxers have lots of health problems, which is not true. However, this does not mean there is nothing wrong with them.

The greatest health challenge seen with white Boxers is that nearly 18% of all white Boxers are born with deafness. This is caused by a lack of pigmented skin in the inner ears of the dog leading to atrophy of the nerve endings weeks after birth.

There is no defined figure for deafness incidences regarding white boxers and they are not likely to develop deafness later in life than it is with brindle and fawn boxers.

Deaf White Boxers are still great dogs that are highly trainable. Boxers don’t rely on sound for commands but can rely on visual cues and highly skilled in reading body language.

Some people see that the lack of the ability to hear in a White Boxer can make the dog more aggressive, but there is no substantial proof of this.

Every Boxer has their temperament and personality, hence, a White Boxer has the same chances of showing aggressiveness just as any Boxer.

Finally, deafness in White Boxers is not associated with any other health problem. Therefore, a deaf White Boxer is just like any other deaf dog and can learn to adapt in several ways.

No, White Boxers are not Albinos. Two boxer parents with white blazes have 25% chances of producing a White Boxer.

Albinos are classified by medical science to have no skin pigmentation with the classic trait being pink eyes while normal dog eyes are brown.

Albinos cannot produce any hair color, therefore, if your dog is predominantly white with brown or black fur around the feet or nose, they are not albino.

White boxers have a recessive gene that gives white hair. Check the skin of your dog for colored patches beneath the fur because that is an indication of melanin. Albinos do not produce melanin.

The issue with White Boxers is that they have a light pigment that affects the inner corner of the eye and can make them go blind, or deaf. The White Boxer is also susceptible to sunburn which increases the risk of cancer.

What Is The Most Common Boxer Color?

Boxers have two different genes for coat colors: brindle and fawn. These two colors are considered common for Boxer dogs. A puppy inherits one gene for color from each parent.

The Brindle gene is dominant over fawn, this means that a brindle boxer dog can carry a fawn gene that is not expressed on the appearance. 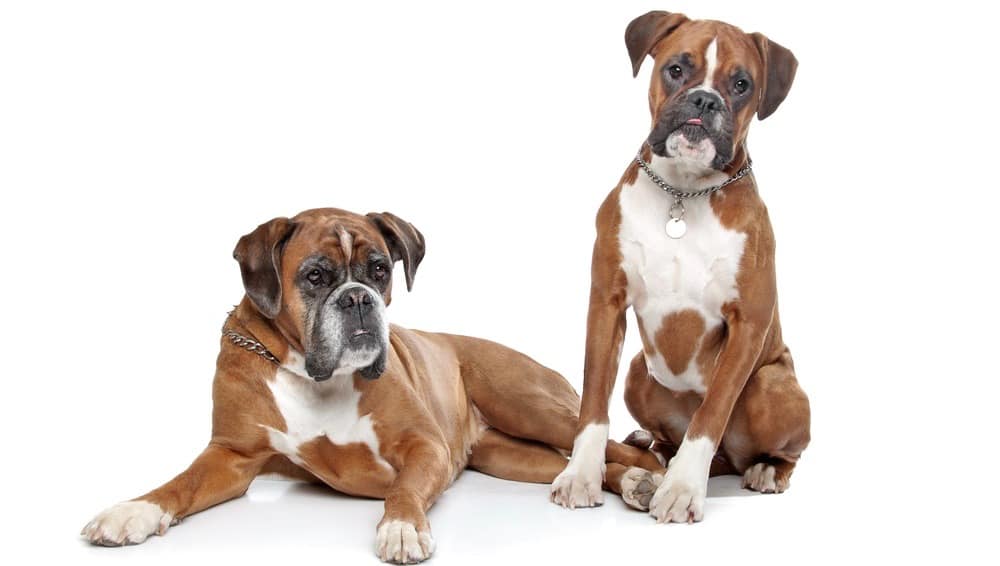 A brindle can sire fawn puppies if the paired parent has one fawn gene. Therefore, the fawn is perhaps the most common color of the three current Boxer colors. Fawn color is the iconic look and the first one which comes to mind with Boxers.

White color puppies used to be killed by breeders at birth because of the impression that their color is rare. This happened until 2016 when AKC allowed the White Boxers to be given as pets with the condition they are spayed or neutered.

Sealed brindle Boxer is one of the rarest boxer colors. They appear black because their stripes are sealed and hard to see any fawn color. 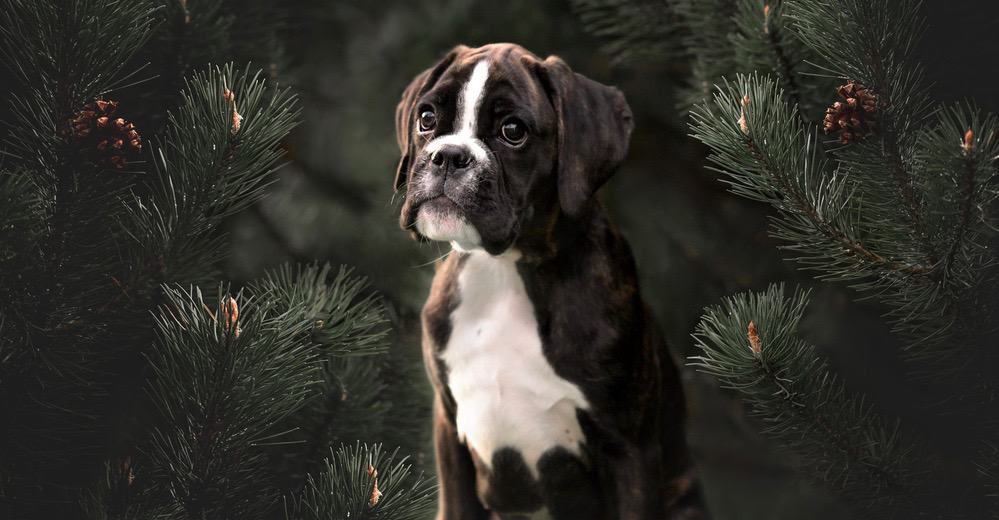 Some people say these boxers have a black coat but that is not the case because Boxers do not have a true black coat, but they are brindle with a very thick close set of black stripes.

The cost that comes with a new pet can be hard to define. If you are looking to raise a Boxer there are things to consider; training, high-quality dog food, insurance, grooming, veterinary expenses, and the cost of the dog itself.

It is good to set a price range affordable for you so that you don’t have to look for all pups above your affordable price.

Throughout the Boxer’s lifetime, the average cost is about $19,595. These numbers can consider all essentials with extra costs like neuter or spaying, gastropexy procedures, walking, and boarding services not included.

A White Boxer can cost less than others colors because they are not eligible for breeding or show rings. 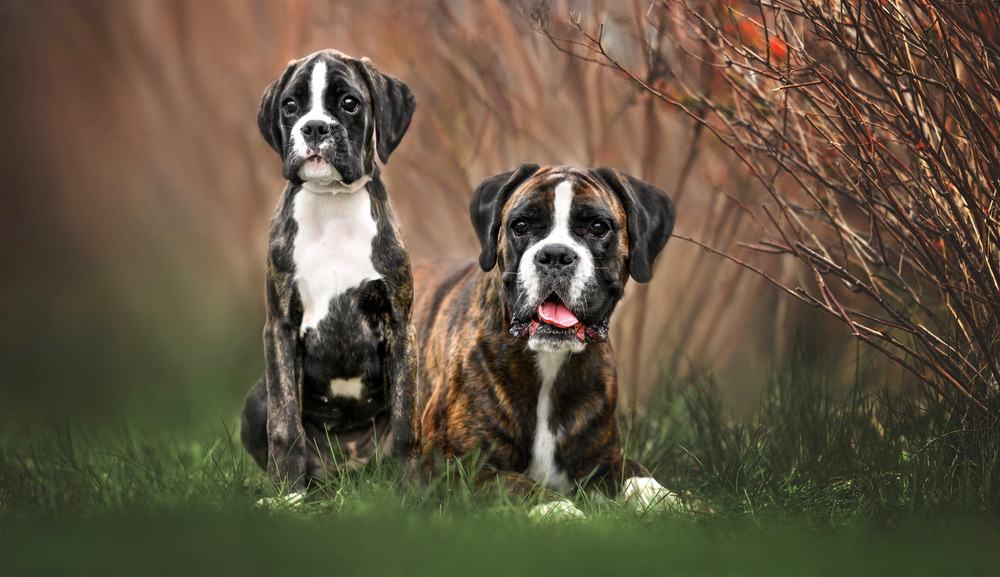 The trends of coat colors can change quickly and for every dog breed there are more popular colors than others, with an increase in specific coat color demand, the puppy’s price also goes up.

For purebred dogs, specific color combinations are recognized by the kennel clubs like Fawn and Brindle in Boxers.

Lastly, puppies that have rare colors can be very expensive. Breeders registered with AKC usually cost more than private breeders but they come with more clarity on the genetics and treatment of the parent dogs.

Do Boxers Change Their Coat Color As They Age?

Most dog breeds have their coats change over time. The puppy coat color will generally be different than the adult dog. Skin disease, medication, nutritional status, and sunlight can affect the change in the coat color.

Coat color can happen even without all those factors present. If you notice any sign of hair loss, skin disease, discomfort, and irritation, then take your pet to the veterinarian. However, sometimes color change is just the progression of the pigment of your dog’s hair.

Boxers are friendly and happy pooches that can make excellent pets whether they are white, brindle, or fawn, but it is good to be aware of the color options within the Boxer breed.