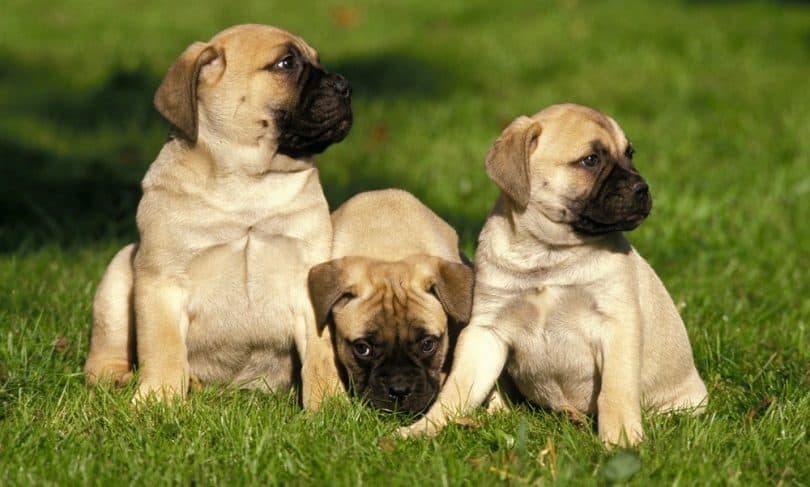 This powerfully built big-breed dog has an interesting history. The Bullmastiff’s earned the nickname “The Gamekeeper’s Night Dog,” in 19th century England where they were bred to hunt poachers at night on the large country estates of the aristocracy.

Bullmastiffs are the result of crossing Mastiffs and Bulldogs (60% Mastiff and 40% Bulldog).

The purpose with the new breed was to have a dog that would catch and pin down a poacher but not maul the intruder so the estate owner can have his revenge in court. The breed was recognized by the AKC in 1933.

The Bullmastiff growth chart below gives you a good indication of your dog’s growth rate from puppyhood to adulthood.

Table of Contents show
1 When Do Bullmastiffs Stop Growing
2 Bullmastiff Weight Chart
3 Bullmastiff Growth Chart – What To Expect
4 Birth – 2 Weeks
5 3 Weeks – 12 Weeks
6 4 Months – 9 Months
7 10 Months – 18 Month
8 Adult
9 Factors That Affect Bullmastiff Puppy Growth
10 How Long Are Bullmastiffs Pregnant?
11 How Many Puppies Do Bullmastiffs Have?
12 What If My Bullmastiff Is Not the Right Weight
13 What Is The Life Expectancy Of Bullmastiffs?
14 How Much Does It Cost To Own A Bullmastiff?
15 Bullmastiff Genetics and Common Health Problems
16 Conclusion

When Do Bullmastiffs Stop Growing

Larger dog breeds usually like the Bullmastiff tend to take longer to grow to their full size. No scientific studies have been done to determine the growth rate of these dogs, so the available figures are mostly from the personal observations of individual dog owners and breeders.

Each dog is different and matures at different rates. On average, dog owners have found that these dogs stop growing between 18 and 20 months with some dogs growing bigger until they are a full two years old.

After its second birthday, a Bullmastiff will keep on filling out and put on a little more weight, but it won’t grow any taller.

When consulting the Bullmastiff weight chart below, keep in mind that these figures are averages and that your dog might not comply with these exact averages. All dogs are individuals and grow at their own rate.

Having said that, you’ll notice that at one month, male and female dogs weigh the same, both starting out at 9 – 12 pounds. When a puppy weighs that much, you know that you will eventually end up with a large dog.

These puppies grow really fast. By the second month, the males have doubled their weight and the females are not far behind.

In fact, both the males and females just about double their weight again when they reach 3 months. Now the males weigh 36.7 – 43.9 pounds and females weigh 34.4 – 40 pounds. By six months, the dogs weigh about seven times their birth weight.

After six months, this incredibly fast growth rate slows down somewhat, but both the males and the females keep on putting on at least 4 to five pounds every month.

By the time they are a year old, the male dogs weigh a whopping 102 – 118 pounds and the female dogs weigh 93 -110 pounds. One can hardly call these huge dogs puppies anymore!

Bullmastiff Growth Chart – What To Expect

A newborn Bullmastiff puppy needs feeding round the clock, at least every two hours. With large litters, and the fast growth rates of this breed, there may not be enough milk from the mother for every puppy and bottle feeding may be necessary in addition to mother’s milk.

During this time, the mother will lick her dogs to encourage them to eliminate. If she doesn’t do this, the dog owner must help out a bit, which is not a bad thing because it’s part of a very early socialization process which is very important for this breed.

At around this time, the mother will regurgitate her kibble for her puppies to eat. This is a sign that you can start feeding the puppies good quality puppy kibble soaked in water. At this time, you can also leave a bowl of water out for the puppies to drink from.

When the puppies turn 12 weeks old, they are ready to eat adult food. The dogs should be fed twice a day so they don’t eat too much at a time and get bloat.

At four months, you should start brushing your dog’s teeth every day or at least two to three times a week. At five months, you can start exercising your dog by means of a daily walk of about 30 minutes.

These dogs don’t need a lot of exercise at this stage, but it’s a good idea to stimulate your dog mentally with chew toys or playing fetch with him. 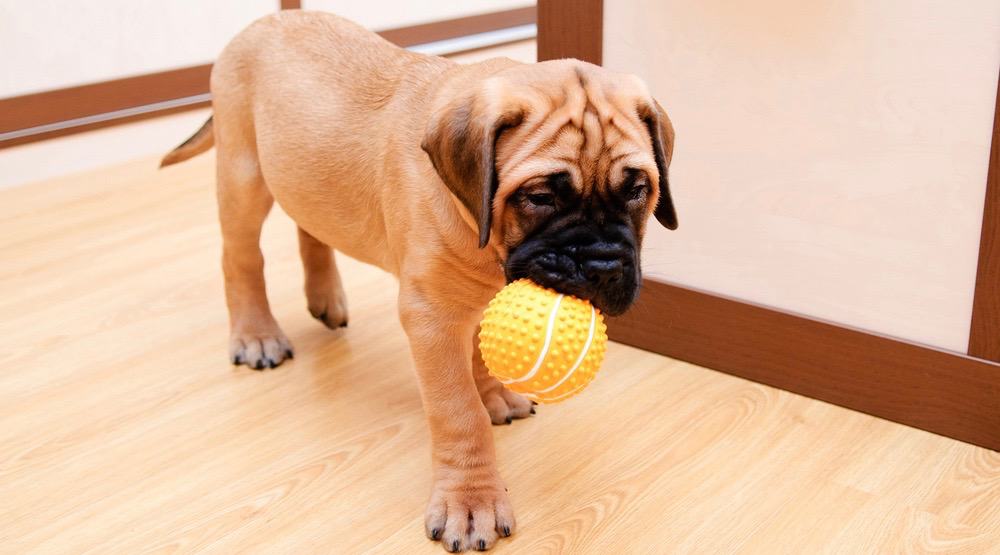 Bullmastiffs grow very fast and they are heavy. Make sure that your dog doesn’t put on too much weight and don’t over-exercise him as he can get hurt. Note: don’t let your Bullmastiff jump over obstacles or off stairs and furniture before he is a year old.

Start socializing your Bullmastiff at 9 months. To do this, take him with you on errands so he can get used to unfamiliar places, sounds and people.

Your Bullmastiff will continue to grow but at a much slower pace. Until 18 months, your dog’s bones, muscles, and joints are still growing, so be very careful not to over-exercise your dog as it will affect his development negatively and cause issues for him later in life.

Bullmastiffs are not endurance dogs. Don’t take your dog on long hikes – he will do better with a few 15-20 minute walks every day.

Adult Bullmastiffs are big and powerfully built which is a natural deterrent that puts intruders off. The Bullmastiff doesn’t bark at intruders, depending on his size and formidable presence to intimidate unwelcome guests. 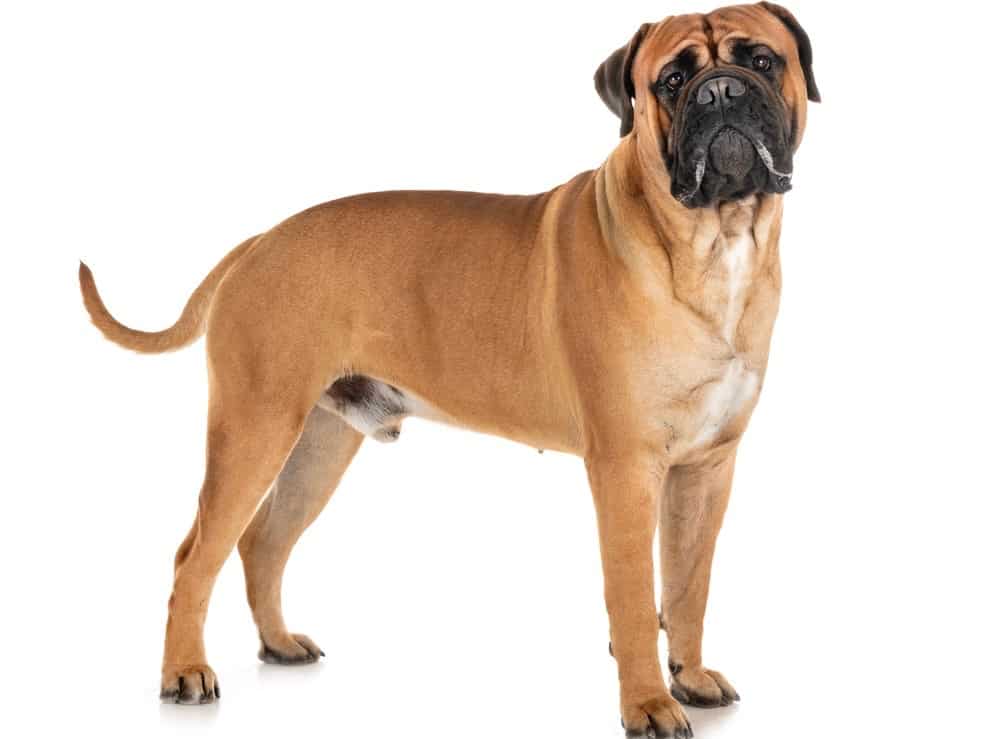 These dogs are not high-energy dogs and need just a few short walks every day. This is one of the reasons Bullmastiffs take very well to apartment living. They have a mellow nature and don’t mind being left alone at home as long as they get dedicated family time when everyone’s at home.

Several factors can affect the size and wellbeing of your Bullmastiff.

It’s not good for a Bullmastiff to grow too quickly as that can cause problems with its physical development. A puppy that receives puppy food for too long, will grow too fast. You should only give him puppy food until he’s a year old.

The best is to feed your dog large breed puppy food. This food contains all the nutrients he needs without letting him grow too fast.

Bullmastiffs are not high-energy dogs and don’t need a lot of vigorous exercise to be healthy. Walking is the best exercise for this breed – once or twice a day for about 15 to 30 minutes will do the trick.

You can also try agility toys and food puzzles. Bullmastiffs also love playing fetch and Frisbee. However, don’t overdo exercise when your dog is still young. He might be huge when he’s one year old, but he’s still only a puppy and shouldn’t exert himself.

How Long Are Bullmastiffs Pregnant?

The dog gestation period starts when a female dog becomes pregnant and lasts until she gives birth to her litter. The gestation period typically lasts nine weeks or 63 days, but it can also be as short as 58 days and as long as 68 days.

You may not see any outward signs that your dog is pregnant, but you might notice other signs that betray her condition, including occasional vomiting, changes in appetite, swollen nipples, and slightly pale gums.

How Many Puppies Do Bullmastiffs Have?

Bullmastiffs often have large litters. The average litter size is eight puppies. Mastiff bitches often have trouble giving birth and C-sections are often performed to help them give birth. 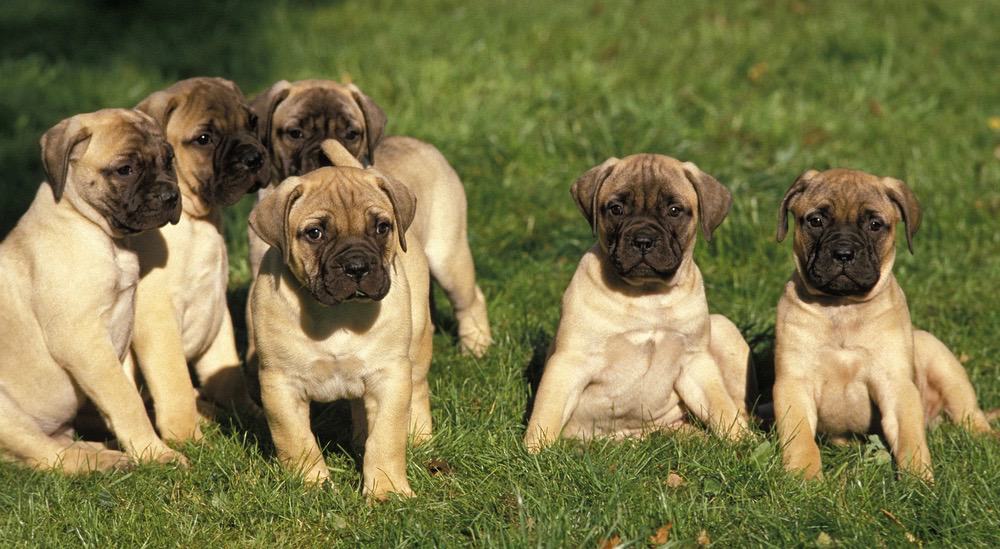 With this breed, a puppy may get stuck in the birth canal, leading to its own death and that of the mother as well as any puppies not born yet.

The breed also tends to have many stillbirths, more so than other breeds.

What If My Bullmastiff Is Not the Right Weight

If there is a change in your dog’s weight health issues, diet, or exercise level could be the cause. If you are not sure why your dog is overweight or underweight, take it to the vet. Also, if you suspect that the issue is related to your dog’s health, it’s better to consult the vet.

However, if you know that your dog’s diet is at fault, then you should take action. Don’t give your dog treats as a reward for obeying you – that adds unnecessary extra calories to his diet.

Also, make sure that your dog gets enough exercise. With a high-calorie diet and too little exercise your dog is bound to put on excess weight.

What Is The Life Expectancy Of Bullmastiffs?

The breed does not live very long. The average lifespan of a Bullmastiff is 8 -10 years with some dogs living a bit longer. Some Bullmastiffs are known to have reached 11 years. 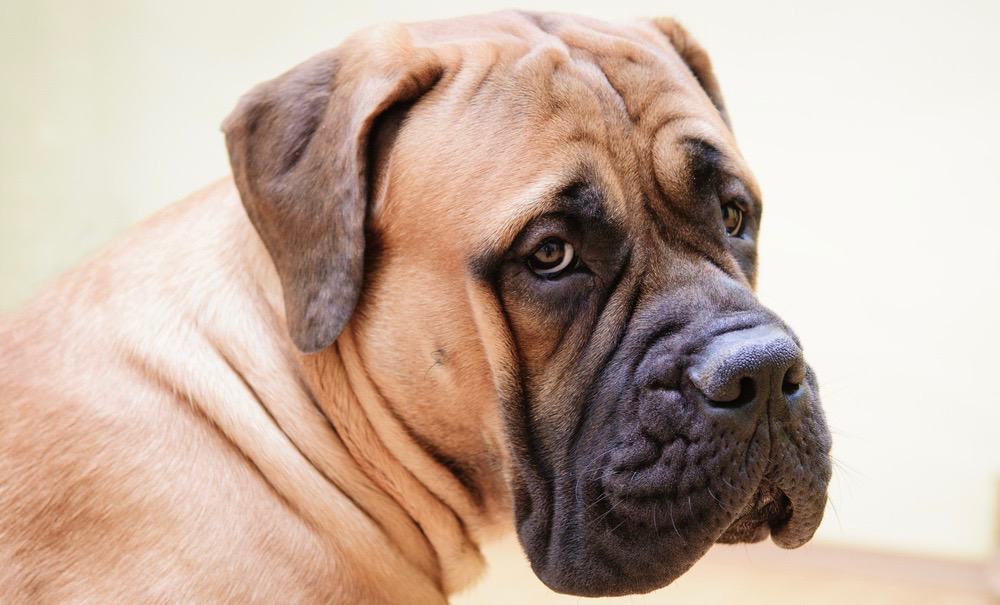 The reason for the breed’s short lifespan seems to be the many health conditions that affect the breed. Large numbers of these dogs suffer from bone and joint diseases or fall victim to cancer when they are only in their middle age.

How Much Does It Cost To Own A Bullmastiff?

The cost can add up considerably if you include insurance, dog walking, boarding services, and sterilizing your dog. Costs also vary according to the area you live in, with some areas being considerably pricier where you can end up with an overall cost of $92,075.

The condition causes lameness in dogs and is the result of improperly formed joints. The condition often leads to painful arthritis in the affected joint.

A large number of these dogs die from cancer. Lymphoma is not uncommon.

Bullmastiffs have a docile temperament within the family, but they are very protective and are not overly friendly with strangers and other dogs.

Although they are huge and look intimidating, they are good around toddlers and children. Mastiffs prefer to live indoors and love to lounge around on furniture.

They take a long time to mature – up to three years, so you might have a very big and heavy dog insisting to be cuddled on your lap for those first three years.