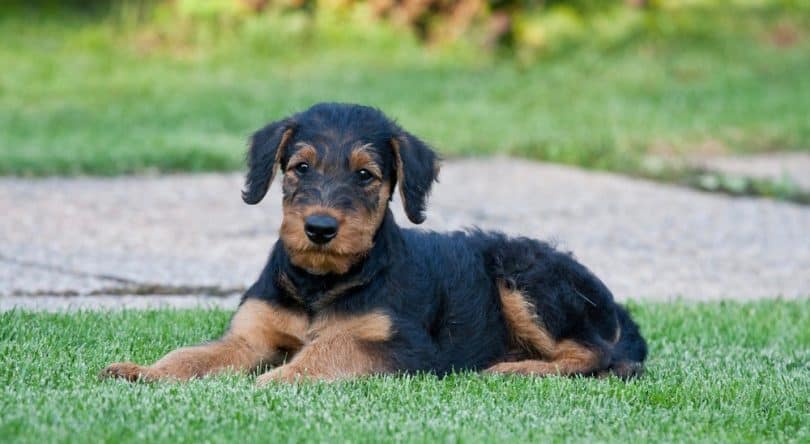 Often known as ‘King of Terriers’, Airedale Terrier is an energetic, intelligent, and sometimes stubborn dog breed that is loved by many dog owners.

If you have recently adopted one and wondering how to raise them right, an Airedale Terrier growth chart will help you be prepared.

Airedale Terriers are considered fully grown at the age of around 8 to 12 months.

This article will provide you with information about the growth of an Airedale Terrier, their health issues, and factors affecting their growth.

When Is An Airedale Terrier Fully Grown?

Certain factors affect the growth rate of puppies including genetics, gender, diet, and physical activity, that is why some puppies are fully grown sooner than others.

Generally, Airedale Terriers are fully grown at the age of 8 to 12 months, although they may continue to fill out their body until the age of one and half years. Some males take up to two years to reach their full size.

Emotional maturity comes at around the age of 18 months where your Airedale stops behaving like a puppy. However, some dogs may continue with puppy behavior longer than others.

Airedale Terriers tend to be overweight, therefore, ensure that you monitor what they eat and exercise them regularly. When they gain weight, it should be muscle and not fat.

Walks and taking them to the park for playtime will ensure that they maintain a healthy weight throughout their life stages.

Your Airedale should weigh between 5 to 10 pounds as a puppy. When they reach the age of 3 months, they should weigh around 30 pounds.

Their growth slows down at the age of 6 months and weighs around 35 pounds. Between 8 to 14 months, your puppy will continue adding weight until they reach their adult size.

As adults, Airedales should weigh between 45 to 65 pounds depending on their gender and adult size.

Speak to your vet if you are concerned about your puppy’s weight and monitor their weight using an Airedale Terrier weight chart. 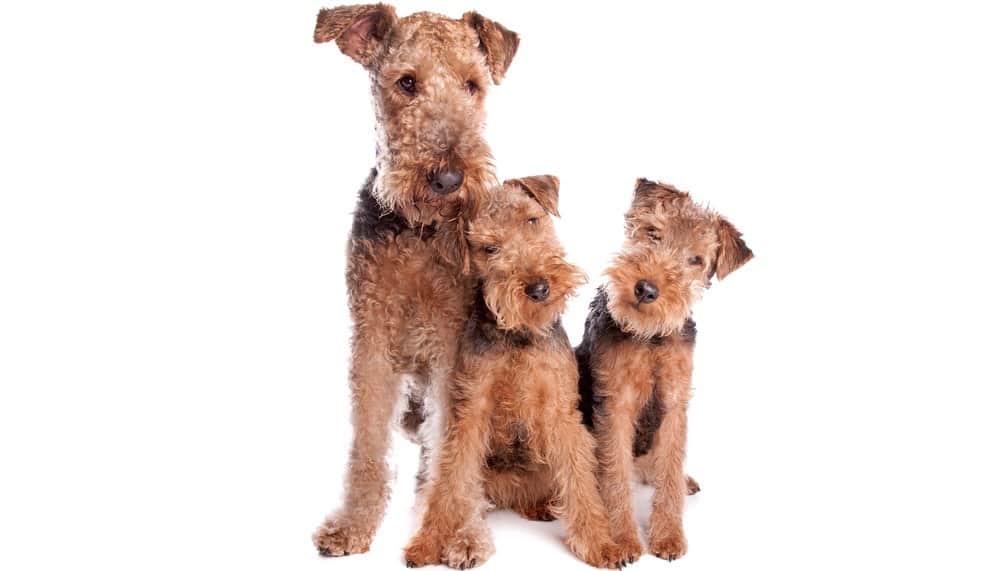 The following is what you should expect throughout the growth stages of an Airedale Terrier:

This is the newborn stage and the puppy spend most of their time sleeping and eating. Their ears and eyes have not yet opened. The puppy is wormed for the first time when they are two weeks old.

The puppy feeds on the mother’s milk as a source of nutrition and the breeder can give them puppy formula if the milk is not enough for the litter.

This is the socialization period where the puppy learns appropriate social behavior when around other dogs and people.

The mother teaches them attention-receptive behavior, bite inhibition, confidence with other dogs, and submissive behaviors.

At this stage, the puppy goes through the ‘fear’ period which is normal and there is no need to worry.

At three weeks, the puppy’s first teeth come out and at four weeks the breeder can give the puppy their first food as a way to start the weaning process. At 8 weeks the puppy is ready to move to their new home.

This is the adolescent period which is characterized by an increase in confidence, curiosity, and independence.

This is the right time to enroll your puppy in training classes so that they can learn about socialization and obedience.

This is the stage where they try to show their dominance and want to be the leader of the pack. Spaying or neutering should also happen within this period.

Most Airedales will reach their adult weight and height in this period. Some may reach their emotional maturity while others can still take longer.

This is the time to transition your puppy to adult food as the nutritional requirements have changed. Speak to your vet about the transition so that you can avoid upsetting your puppy’s stomach.

Airedale Terriers are considered adults from around the age of 18 months when they are mentally, physically, and sexually mature.

This is the stage where all the training that you did when your puppy was young pays off.

This is the stage to monitor their weight to ensure that it is always healthy to prevent health conditions such as diabetes, obesity, and heart disease from developing. Regular visits to the vet are recommended.

How Big Do Airedale Terriers Get?

Airedale Terriers are considered medium-sized dogs and you may be wondering how big they will get when they are fully grown.

Looking at their parents and paws as well as doing a DNA test can give you a rough idea of how big your puppy will get.

The size of the parents is a clear indication of the adult size of your puppy because physical traits can be passed down genetically from parents to puppies.

Puppies inherit their size from either the mother or the father, so look at your puppy’s parents to have an idea.

If your puppy’s paws are unusually large, then they still have time to fill out their body to match the paws. But if the paws are small, then they are likely not growing any longer.

If you cannot access the information about the size of your puppy’s parents, do a DNA test with the help of your vet and use the results to predict their adult size.

Will Neutering/Spaying My Airedale Terrier Affect His Growth?

Spaying is a surgical process where the female dog’s ovaries and uterus are removed while neutering involves the removal of the male dog’s testicles.

These processes can affect the growth of your Airedale if done too early. This is because reproductive hormones signal the growth plates to close, but the hormones are removed your dog will continue growing and will be slightly taller than average.

However, speak to your vet to know the exact time you should neuter or spay your puppy because certain factors can influence these procedures.

There are benefits of spaying or neutering your puppy. These include less risk of ovarian cancer in female dogs and testicular cancer in male dogs.

Having the right measurements for your dog’s height is essential for many reasons. For instance, you will need the measurements so that you can buy your dog the right clothing and a harness that fits perfectly.

Finding your dog’s height will also be needed when purchasing a dog kennel or door, and if you want to enter your dog in shows.

To measure your dog’s height, you need a tape measure and flat ground. Ensure that your puppy is standing straight on the floor with their feet evenly spaced out. If your puppy is too excited to stand still, let them stand on the table and have someone hold them.

Find their withers which are on the base of their neck. It is the highest point between the shoulder blades.

Take the measuring tape and measure from the ground to the withers. This is your dog’s height.

The Irish terrier may grow 4 inches taller than Airedale and weigh 37 pounds lesser than the Airedale.

The ideal weight for a female Irish Terrier is about 25 pounds and the male is 27 pounds. The height at their shoulders is about 18 to 20 inches.

Genetics is a great contributor to the Airedale Terrier size. Knowing the size of the parents and grandparents of your puppy will help you approximate their size when they will grow. The Airedale Terrier can also be affected by genetic disorders such as eye problems.

Generally, male Airedales are heavier than their female counterparts.

Nutrition may affect the growth and development of your dog. While in the growth stage, puppies require nutritious meals, therefore, give your dog the right amount of food according to their ages to achieve optimal growth.

The best way to get to know your Airedale Terrier’s right food is to consult with your vet to help you select the best diet for their growth.

Exercising your dog is very important but you should be careful not to over-exercise them. Exercise keeps your dog in the right weight and good shape. Airedale Terriers flourish with walks, lots of activities, and playtime.

Train your puppy gently because of their developing joints, muscles, and bones to prevent injuries in their early development stages.

Physical and mental activities help improve their growth and stimulate their minds and bodies.

What If My Airedale Terrier Is Not the Right Weight?

Your Airedale Terrier is not the right weight if they are overweight, obese, or underweight. Obesity in dogs can cause health problems such as joint and back problems, heart disease, shorter lifespan, and breathing difficulty.

Therefore, provide your Airedale terrier with a healthy diet for proper weight. Reduce carbs in your dog’s meal because they can be stored in the body as fats.

Maintain a high balanced diet and schedule your dog’s mealtimes to keep them from being hungry. Scheduled mealtimes also maintain their metabolism and the utilization of meals in the body.

Regular mealtimes discourage them from scavenging around the house. Consult with your veterinarian to get the right guidance on how to help your Airedale terrier gain or lose weight.

Dental problem is the most common in Airedale Terriers. It affects most dogs at a young age, and the Airedale Terrier is likely to develop teeth problems more than other dogs.

It can start with a buildup of tartar which can lead to infection of roots and gums of the teeth.

Cancer has been the leading of older dogs’ death. Airedale Terrier lives longer than most dogs, thus is prone to cancer in their golden days. Cancer can be surgically removed or treated with chemotherapy.

Bone and joint problems have been reported in Airedale terriers but, they can be treated earlier to prevent pain and suffering. Your dog may require diligent observation to take care of him throughout his life.

Hemolytic Anemia is a relatively rare disease of the blood and particularly affects Airedales. This disease comes when the dog’s immune system goes haywire and attacks the red blood cells or platelets.

It results in the dog becoming weak, anemic, and lethargic. If your dog gets Hemolytic Anemia or thrombocytopenia, there are steroids and immune-suppressive drugs that will slow or stop the destruction of the immune system.

The bleeding disorder known as “hemophilia” affects Airedale Terrier. Diagnostic testing is conducted to assess the blood clotting before surgery because you might not know if your dog has a disorder until severe bleeding occurs after a severe injury or during the surgery.

Taking care of your Airedale Terrier means providing them with a healthy and balanced diet as well as exercising them by going on walks and playing with them.

Visiting the vet regularly will also ensure that their health is in check because any illnesses can be detected early and your puppy remains in a healthy condition throughout their life.