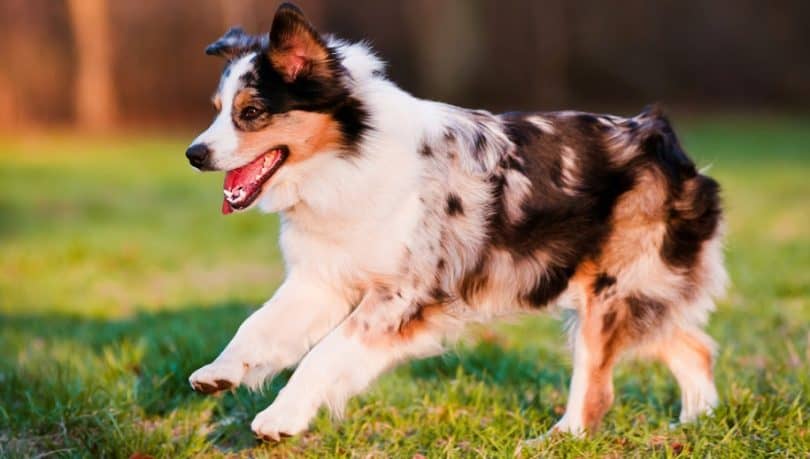 Have you been spending most of your time online looking at the delightful photos of Australian Shepherds because you want to get one for yourself?

Have you noticed something strange about their tail area and curious whether they are naturally tailless or not?

Are Australian Shepherds Born With Or Without A Tail? 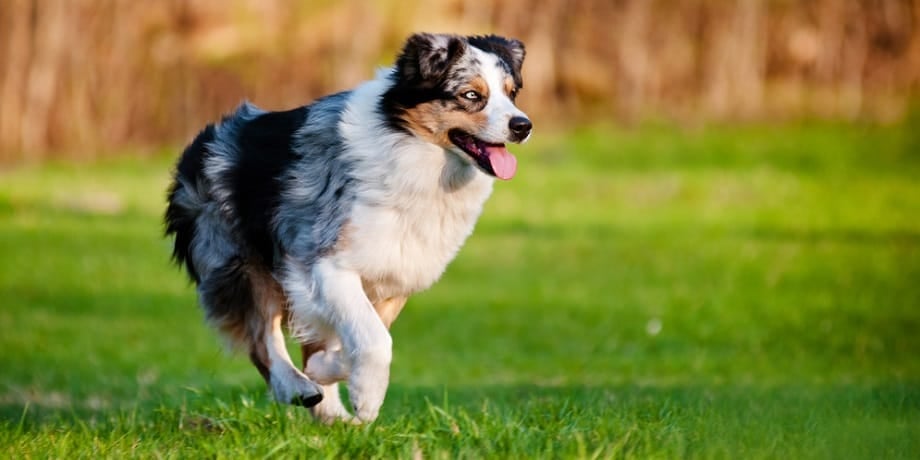 They are known to be among dog breeds that do not have tails, but only one in five Australian Shepherds have naturally bobbed tails.

The kennel clubs such as CKC, AKC, and ASCA only recognize purebred Australian Shepherd with a tail length not exceeding 4 inches, but normal tail length is always more than that.

51% of Aussies born with tails that are bobbed are reported to have absent or very short tails.

A small number of Australian Shepherds with ‘very short’ tails do not have to be docked and they will pass the kennel club’s standards.

Therefore, Aussies have tails, and the question should be whether they are visible or not.

Australian Shepherd With A Bobbed Tail vs. With A Normal Tail: Appearance

Australian Shepherds can vary between one with a normal full-length tail and another with a bobbed tail.

Additionally, it can be difficult to differentiate Aussies that have gone through a docking procedure from those that have naturally bobbed tails as they appear the same.

It is easy to distinguish Aussies with a normal tail from those with ‘very short’ natural bobbed tails. Australian Shepherds with normal tails exceed 4 inches which is the traditional length accepted by the kennel club’s standards.

Aussies with normal tails that are full length often have fur that is as lengthy as the tail, meaning taking care of it can be difficult due to the increased tail tangling and matting.

2% of Australian Shepherds born with natural bobtails developed defects related to natural bobtails. When Aussies with bobtails are bred, the puppies can develop serious defects in the lower spinal cord or Spina Bifida.

Kinked tails are another minor defect that does not pose a health risk, but it can be unpleasant for Aussies to have. The reabsorption of fetuses increases the risk of having small litters.

This controversy reminds breeders to avoid breeding two Aussies that have naturally bobbed tails as it can lead to fetal death or severe health issues. 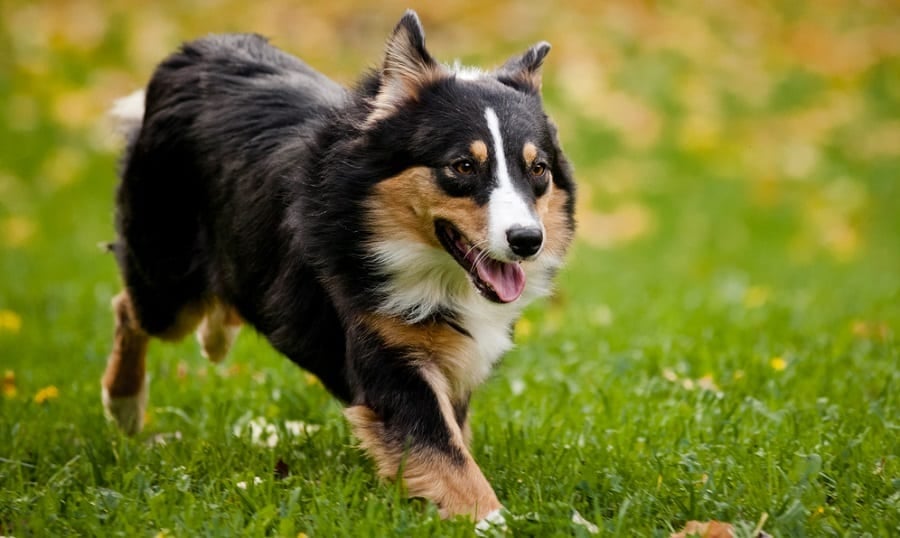 If you own a bobtailed Australian Shepherd or planning to own one, you should familiarize yourself with the possible health issues that can affect them.

Below are some of the potential health issues related to a bobtailed Australian Shepherd:

Docking is the removal of several portions of the tail of an animal through a surgical procedure.

Traditionally, ranchers and farmers remove parts of the tails of their Aussies to reduce injuries during hunting or herding and make them pass as sheepdogs.

However, in the mid-1880s the kennel club was established and tail docking among Australian Shepherds has been carried out for cosmetic purposes and to meet the standards for this breed.

The following are the most common reasons why breeders dock Aussie puppy’s tail:

Although tail docking is accepted by the kennel club standards for purebred Aussies and has been practiced by most enthusiasts for Australian Shepherds, there has been increasing opposition recently.

For example, the American Veterinary and Medical Association (AVMA) strongly opposes tail docking for cosmetic purposes because this practice is not medically indicated. Rather, it is done for appearance which is an unnecessary surgical procedure.

It is advised to check the policy of your country before docking your Aussie’s tail because some countries have banned docking in recent years especially if it is for cosmetic purposes.

What Is The Ideal Length For A Docked Tail Of An Aussie Shepherd?

According to the American Kennel Club, the preferred tail length for a full-sized Australian Shepherd is four inches. The kennel club also allows bobbed tails in the breed if they happen naturally.

Talk Docking Procedure: How And When Is It Done

Breeding Aussies with naturally bobbed tails have the risk of fatal health when the two T-genes are transferred to an offspring.

However, the docking length of the Australian Shepherd’s tail should not be more than four inches otherwise it will be faulty according to the kennel club standards.

Therefore, if your want to achieve the bobbed tail requirement, a safer approach is to dock their tail than breeding them purposely. So, what is the safest time to dock your Aussie’s tail?

Australian Shepherd puppies should get their tails docked within three to five days after birth. However, you can also dock the tails of older and larger breeds through surgery.

The following are two methods of docking your Australian Shepherd’s tail:

Before deciding to dock your Aussie’s tail, research in-depth to get enough knowledge to ensure that you put the health of your puppy over aesthetics.

The Downsides Of Getting Your Aussie’s Tail Docked 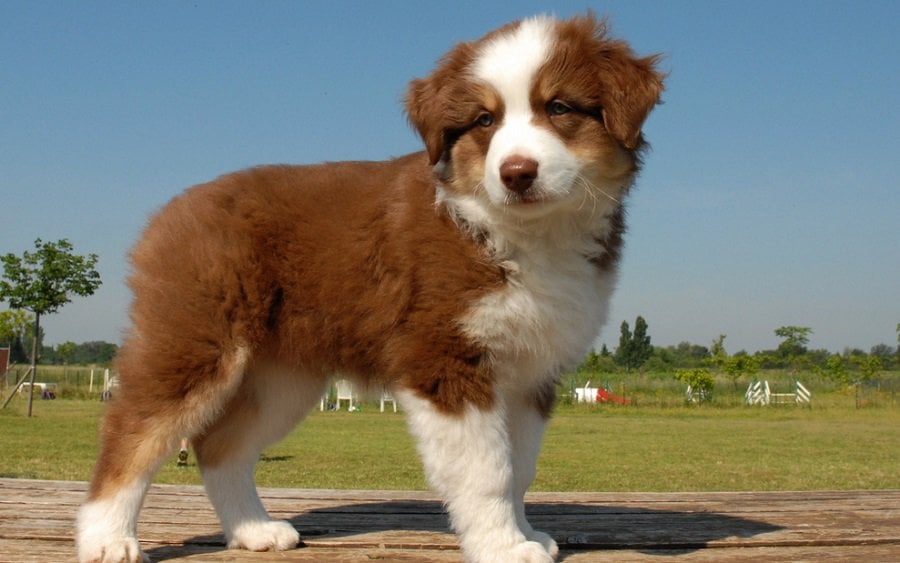 Tail docking is very controversial in the dog world as it comes with its risks ranging from incontinence to chronic pain. The following are the downsides of docking your Aussie’s tail:

Tail Docking And Its Legal Aspect

The Australian Shepherd Club of America does not allow tail docking that causes unnecessary pain and risk for cosmetic purposes.

This is because if the procedure is done under anesthetic, it increases the risk of infection and blood loss as well as chronic tension that can be lasting in the hindquarter and back muscles after the procedure.

However, if the procedure is done for hygienic, standard, and working needs, it should be done by an experienced practitioner at the right time to ensure the risks of blood loss and infection are reduced.

Also, the breeder should use the hygienic procedure to care for the puppy once docked to ensure that the risk of infection is relatively small.

In the United States, the procedure of tail docking is widely common despite protests from certain quarters.

However, some states such as Vermont and New York have put some restrictions on the practice and passed a bill to make docking illegal.

In the United Kingdom, tail docking is banned except for the Spaniels, Retriever, and Point breeds that are vet certified and categorized as working dogs. In Canada, the procedure is largely banned.

The rest of the world is divided toward the approach of docking purpose and process. Most Southeast Asian countries do not restrict tail docking while other countries such as Sweden, Switzerland, and Norway ban the procedure completely.

Is Tail Docking Painful For The Dog?

Those advocating for tail docking claim that the procedure does not cause discomfort or pain as the puppies’ nervous system is not fully developed.

However, this is not the case because the nervous system is fully developed when the puppy is born. Also, puppies have the same sensitivity as adult dogs.

The procedure is often done without pain relief or anesthesia which can make the puppy produce shrieking noises when the tail is cut and stitching the wound meaning that they experience some level of pain.

As the wound heals, the damage and inflammation to the tissues cause ongoing pain. Unnecessary surgery also increases the risk of health complications and infection.

Also, docking can lead to unavoidable and unnecessary distress and chronic pain to the dog.

What Is The Australian Shepherd Tail Docking Recovery Time?

If the docking is carried out within three to five days of age, the discomfort should last for around two to four days. However, if the procedure is done on older dogs, they may take a longer time to recover.

How Much Does The Procedure Cost?

It is recommended that you should dock your Aussie puppy before they turn 5 days old since if you wait for longer, the tail will get harder because of the calcium build-up.

Typically, tail docking will cost you around $15 to $35 for one puppy, but the cost can be higher if the procedure is done to the entire litter. The vet will charge an extra examination fee of about $45 to $75.

If the puppy is past 5 days old, a surgical procedure will be recommended by the vet which is more expensive because it involves a complex procedure and anesthesia.

From this article, Australian Shepherds have tails and can vary between a normal full-length and a bobbed tail.

Whether you decide to keep their full-length or dock it to become bobbed, there will not be much difference because they are both beautiful.

In addition, docking your Australian Shepherd is safer to get the bobbed tail than breeding them.

However, you should not conform to standards and trends because the overall welfare and wellness of your Aussie should come before aesthetics.