Whether you are considering adopting an Irish Setter puppy or you already have, you will likely wonder about how quickly he should be growing and how big you can expect him to get.

You can use an Irish Setter growth chart as a guide to help you determine whether your puppy is at the right weight and to get an idea of how big he will be when grown.

Remember that growth charts are a great way to estimate weight, but they are not perfect and will not reflect each dog.

Dogs of any breeds do have a variety in size, but still, the chart can be helpful.

When Is An Irish Setter Fully Grown?

Irish Setters are a large breed of dog. This means that they do continue growing longer than a smaller breed would.

For example, a toy dog is likely to hit his final weight when he is around 6 months old. Your Irish Setter has more growth to do.

It is possible to continue to gain weight until they are 2 years old as well.

Then, following across the chart, you will find the average weight for that age for both male and female Irish Setters.

For example, if your Irish Setter puppy is 6 months old, you will see that a male puppy at this age should weigh around 40 pounds, while a female would weigh slightly less at 38 pounds.

Remember that these are averages, so if your puppy weighs a little more or less than the average, that is normal. Any concerns about weight should be addressed with your vet.

You can also use an Irish Setter growth chart to get an idea of how big your puppy will be as he grows.

So, if you know that your male puppy is 42 pounds at 6 months, looking ahead in the growth chart, you can estimate that he will still be larger than average when he is 16 months old.

While the average weight is 68 pounds, you can expect your puppy to be more like around 72 pounds. 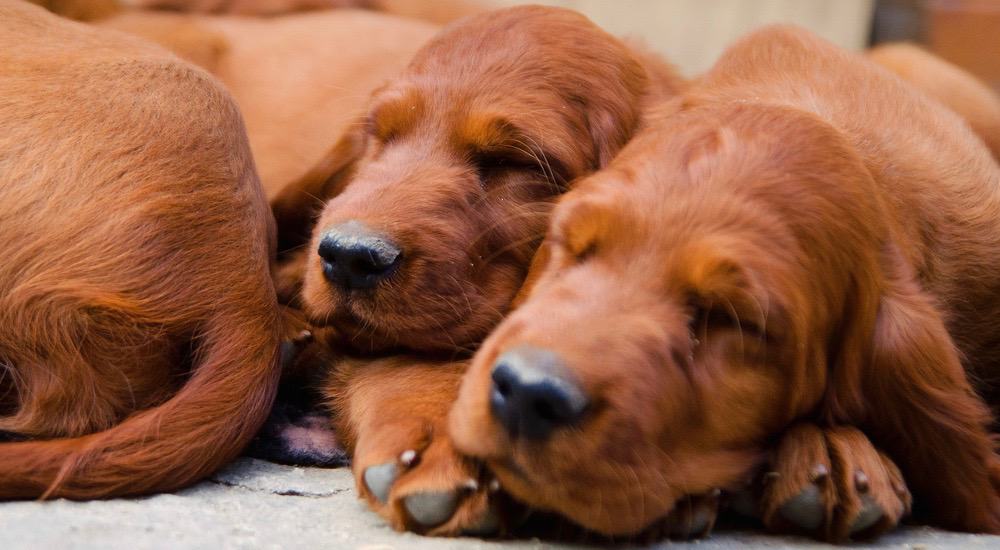 Generally, they weigh under a pound when they are born, easily gaining weight in between birth and 2 weeks old. At this age, they still live with their mother and survive off of her milk.

There is a huge amount of change that will happen for your Irish Setter puppy between 3 weeks of age and 12 weeks of age.

At 3 weeks old, the puppy should still be with his mother and rely on her.

Around 6 weeks old, he will begin to wean off of his mother’s milk, making them easy to rehome when they are 8 weeks old. They will be hungry and growing rapidly at this age.

Between 4 months and 9 months old, your Irish Setter will begin to go through adolescence.

While this was typically the range to have your dog spayed or neutered, current science recommends against it for large breed dogs. 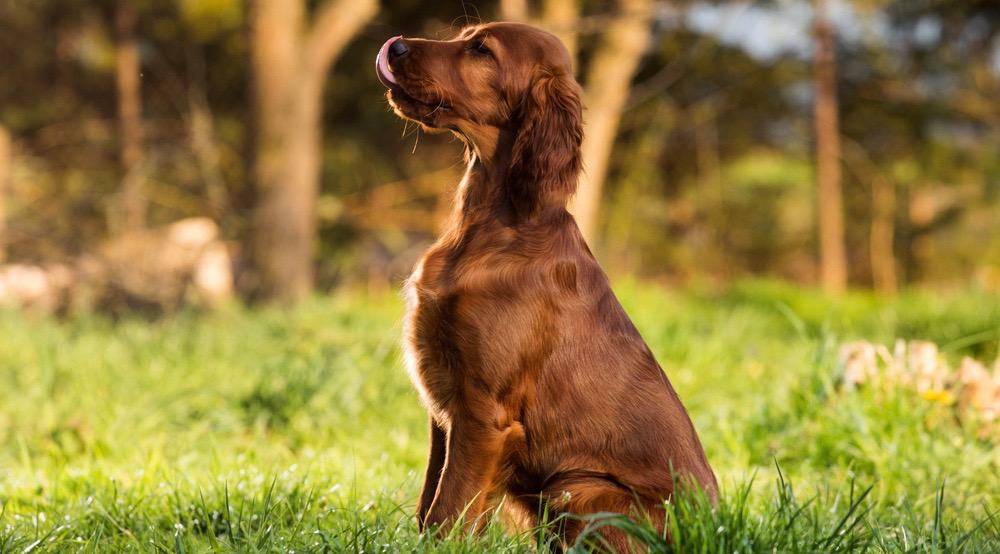 Your dog should be very hungry during this time period and he will be growing very quickly. The pups will start to look big and should still only be fed puppy food at this point.

Generally, an Irish Setter will reach his final height between 10 and 12 months of age. Once he reaches his final height, he will continue to gain weight for several months after that.

The majority of Irish Setters will reach their adult weight by the time that they are 18 months old.

Around 12 months is when you should switch your dog off of the high-calorie puppy food, moving him to a healthy adult food.

Your Irish Setter puppy should be his final adult size by the time that he is 18 months old. This does not mean that the dog will calm down and be more mature.

Setters remain in an energetic state of good cheer for many years, so keep that in mind when you decide to adopt one.

As an adult, your pup should not grow any more in size, so watch his weight to keep him as healthy as possible.

How Big Do Irish Setters Get?

There are a few different things that you can do to help you get a good idea of how big that your puppy will get.

The first is definitely to use a growth chart. This guide will give you a good idea of what you can expect from your dog.

After consulting with a growth chart, you might still want more ideas. If you are able to see what the dog’s parents look like, you will get a really good idea.

Most dogs will take on some of their parent’s traits, so you will know what you are looking at with your puppy.

You can also look at your puppy’s paws to get an idea. Puppies usually have to grow into their paws, so if your puppy has large paws and is a small dog, you know he will have to get bigger to do it.

Finally, you can use a DNA test to confirm the genetic history of the dog and get a good idea about your pup’s size.

Will Neutering/Spaying My Irish Setter Affect His Growth?

Traditionally, puppies are neutered when they are puppies. The old model was that you wanted to spay or neuter your dog before he reached maturity, preventing unwanted pregnancy.

There has been more research about this since then, and there have been concerns about having puppies fixed too early.

Spaying and neutering a dog can prevent some types of cancer will prevent your dog from becoming pregnant, and will also help keep your dog from running off to find a mate.

When dogs runoff, they can be hit by cars, get lost, or come face to face with predators.

The new research has shown it is better to wait, however. Dogs that are spayed and neutered before maturity have been shown to develop joint issues, affecting their mobility as they grow.

While we have spoken quite a bit on an Irish Setter’s weight, we have not spoken about their heights. An Irish Setter will continue to grow in height until he is about a year old.

On average, an Irish Setter is about 26 inches in height as an adult. Typically, female dogs are smaller than their male counterparts, so females are more like 24 inches on average, while a male is around 28 inches. 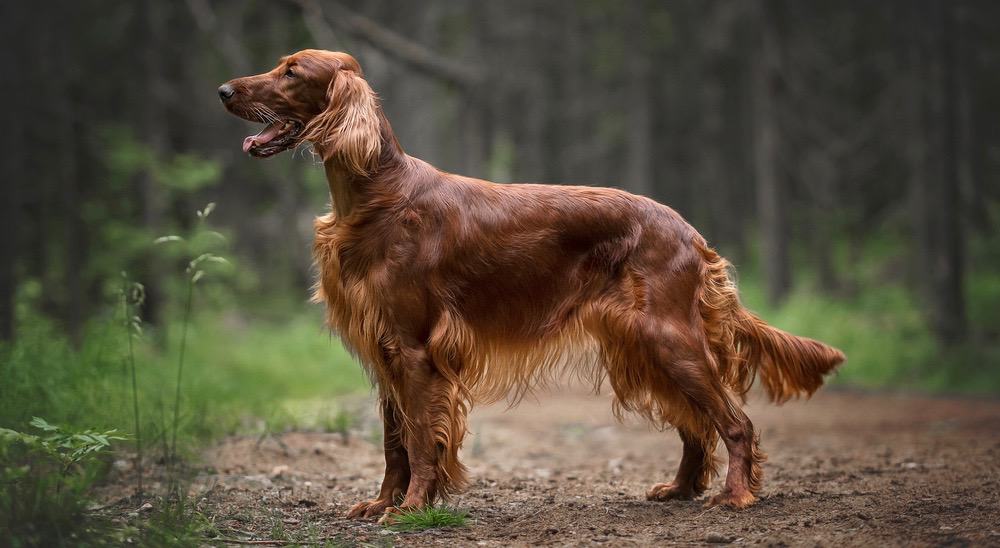 To measure your pup’s height, you will need to have him stand up on all four legs. Then, using a tape measure, measure from your dog’s shoulders to the ground.

This distance, while standing, is your dog’s height. There are height charts out there to compare to, but height usually matters less than weight in terms of growth.

With their long fur coming in shades of cold and red, it is easy to see how Golden Retrievers and Irish Setters can be confused for one another.

They are not the same dog, however. In terms of size, Golden Retrievers, despite being a large dog breed, are smaller than Irish Setters.

A couple of inches likely are to be rounded, so they really are about the same.

Weight-wise, the two are similar. Golden Retrievers could weigh between 55 and 80 pounds while Setters weigh somewhere between 60 and 70 pounds. The dogs really are very similar and it can be really easy to mix them up.

The biggest difference between the two has nothing to do with size but instead has to do with natural demeanor and personality.

Genetics is the biggest factor that will determine your Irish Setter’s size. Looking at how big the dog’s parents are is a great way to get an idea of your dog’s ultimate size.

Whether your dog is female or male will also determine size as the female setters are normally smaller in stature than the males are.

A common concern among dog owners is whether their dog is malnourished and whether this will affect his growth. Generally, unless a dog has been severely abused and malnourished, nutrition is not going to affect his size.

The exception is that dogs who are overfed may wind up with joint issues as they age.

When young, developing joints are put under pressure, they often will not develop the way that they should have. As a result, the dog may be shorter in the end with added pressure.

You might be thinking that physical activity will not affect growth, but it can. Dogs that are put under too much strain at a young age often will not have the ability to grow as big as they could be.

Additionally, dogs with a lack of exercise who are allowed to gain too much weight can also be stunted. A dog that is unhealthy will also have trouble growing, usually caused by a medical condition.

What If My Irish Setter Is Not The Right Weight

If you are looking at the growth chart and then looking at your dog’s size and seeing a huge discrepancy, it is common to panic.

But, do not worry at first. There are plenty of reasons that a dog might not be the same weight that you find on a growth chart.

The average means it is just the most common size or middle ground between all of the sizes.

The most important thing when monitoring your dog’s growth is that your dog needs to remain on his own growth curve.

As long as he is growing steadily and consistently, there should be nothing to worry about. If your dog has veered off his own growth curve, then it is time to call your vet.

All purebred dogs are at risk of developing a chronic health problem at some time because purebreds have been bred in a way to keep the line protected.

Irish Setters are included in this and unfortunately do have a higher risk for some ailments, including:

This is a common joint issue that will affect your dog’s mobility as his hips were not developed correctly. Spaying and neutering too young can incapacitate them.

Unfortunately, the dogs do have a higher risk of developing eye issues as well, so it is good to make sure that your vet can see your digital presentations.

Just like with humans, some dogs have a thyroid that behaves well.

If your puppy has not shown any of these signs, it is possible that the puppy is in the clear, but only a vet will be able to help you sort through it.

Irish Setters are wonderful pets to have, but when you first adopt one, it can definitely feel like your dog is just going to keep getting bigger forever.

That is why you should consult with our growth chart. By understanding what the averages are, you will be able to gauge where your dog should be as far as weight and size goes.

It is important to understand that the breed is large and you cannot expect to have a small dog at the end of it. If you have concerns about how your dog is growing, always check with your vet.