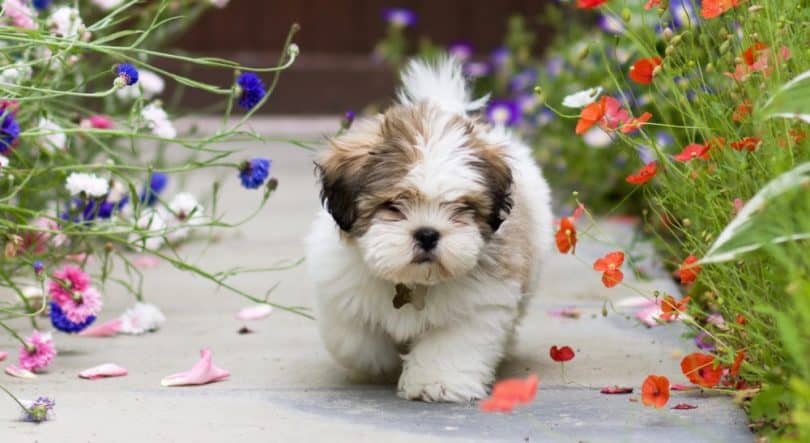 Whether you are considering adopting or have already adopted a Lhasa Apso puppy, there are many things that you will want to know about your puppy, including how big he will be.

You can use a Lhasa Apso weight chart to see how big your dog should be, but you should also know how big the breed gets and any concerns that you should have.

One of the most recognizable dog breeds, the Lhasa Apso is a strong and independent dog.

But even the most bull-headed dogs will need to have the care and guidance to help them grow healthy. Here’s what you need to know.

When Is A Lhasa Apso Fully Grown?

The biggest question that you might have regarding your Lhasa Apso is what constitutes a fully grown Lhasa Apso?

They are a smaller dog, which means that they do reach their final adult size at an earlier age than a larger breed would.

In general, you can expect that your Lhasa Apso puppy will be done growing by his first birthday.

He should slow down his growth when he is 6 months old, only gaining a few pounds and a couple of inches after that, but all growing should stop around a year old.

Using a Lhasa Apso growth chart will be incredibly helpful with knowing whether your pup is staying on his growth curve as well as how big he should be when he is fully grown.

But, you also need to understand how to use the weight chart.

Usually, you will use the weight chart by lining up your puppy’s current age and then following the chart to find out what the average weights are for that age.

For example, a puppy that is 5 months can weigh between 9.25 and 12 pounds on average.

It is really important to understand that the chart is based off of averages and not based on anything completely solid.

Your puppy may not fit within this growth chart at all, but as long as he is growing steadily and consistently, you shouldn’t have anything to worry about.

You can also use the chart to get an idea of how big your dog will be as he ages. 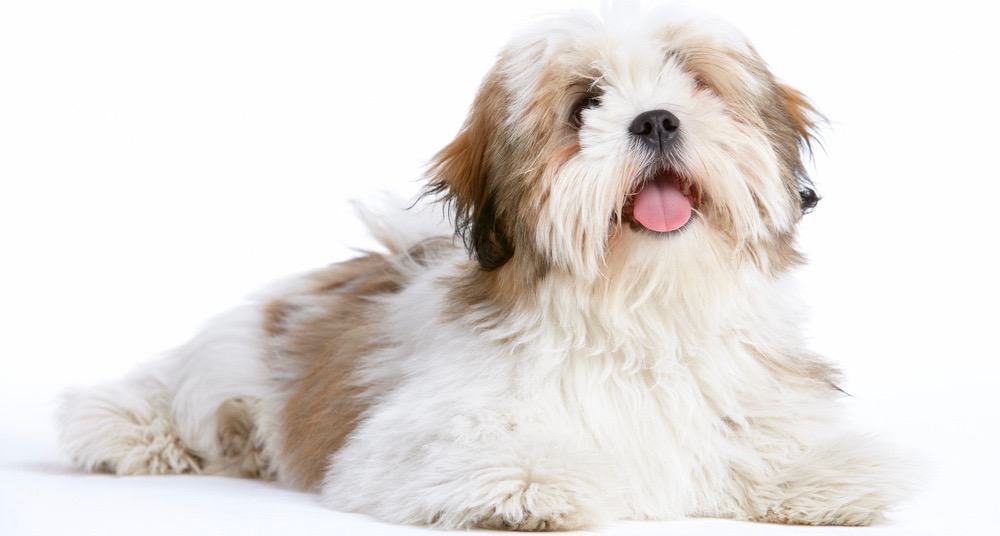 When a Lhasa Apso is born, he will not weigh more than a few ounces. They do gain weight relatively quickly, but will not be able to move around much until they are about 2 weeks old.

This is when they open their eyes and begin to explore their world. They should still be with their mother at this point, completely reliant upon her milk for sustenance, and should not be offered any puppy food.

There is a huge amount of growth between 3 weeks and 12 weeks of age. At 3 weeks, a Lhasa Apso has to stay with his mother if he is to grow healthy and strong.

But, by 12 weeks of age, the puppy will not only be weaned from mother milk and moved onto dog kibble but will have been rehomed away from his litter.

It is also the period of the greatest amount of growth, jumping from a couple of pounds up to 8 to 10 pounds.

Your puppy will continue to grow easily between 4 and 9 months of age. At 4 months old, your puppy should be between 8 and 10 pounds, on average.

When your puppy has reached 9 months, you can expect him to weigh between 12.5 and 16.5 pounds.

These are averages, as we mentioned before, so just make sure that your puppy is staying on his growth curve, meaning if he is always heavier than average, he should continue to be the same amount or heavier. 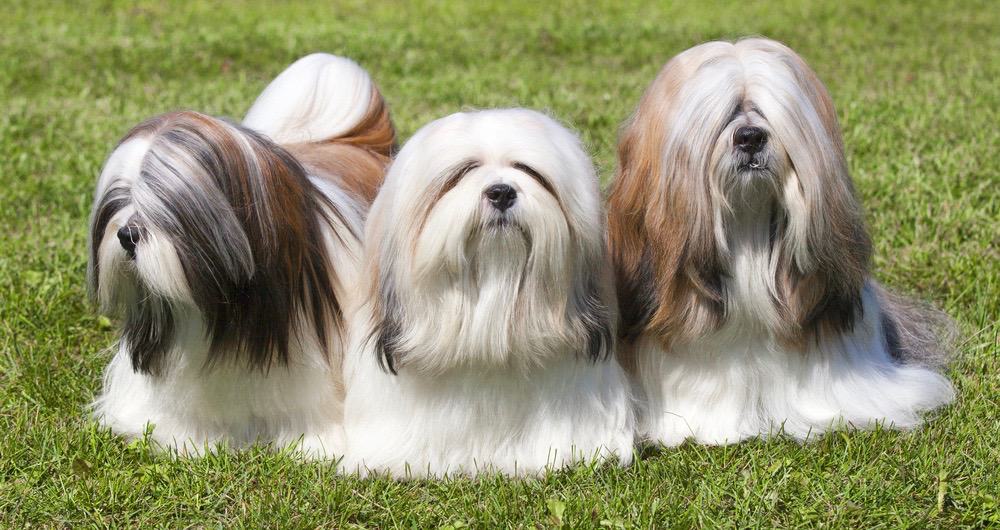 You will notice as your look at a Lhasa Apso growth chart that the puppy growth stage slows down quite a bit as the puppy reaches 10 months of age.

He should continue to grow and gain weight at this point but it will be minimal when you compare it to previous growth spurts. He should be done at 12 months of age, so nothing will happen after that.

As we mentioned above, your Lhasa Apso puppy should reach his final size when he is about a year old.

Typically, Lhasa Apsos are around 11 inches tall and can weigh between 12 and 18 pounds, but again, this is an average.

You will also need to change your dog’s food from puppy food to adult food at this age since he will not be growing much, if any, after this point.

How Big Do Lhasa Apsos Get?

If you are looking at your sweet Lhasa Apso puppy and wondering what he will look like when he is an adult, the first thing to check is the Lhasa Apso weight chart, which should give you a breakdown of size at certain ages.

But, that isn’t the only way to get an idea of what to expect.

Another way to get an idea of your dog’s final size is to look at the parents, if you know them. Generally, dogs are a similar size to their parents.

You can also look at your puppy’s paws. Larger paws usually indicate a larger dog, because your dog will have to grow into the paws.

Finally, you can have a DNA test performed on your dog that can list what the makeup of your dog is. This is a tricky test because there are many types out there and they are not always reliable.

Will Neutering/Spaying My Lhasa Apso Affect His Growth?

Not long ago it was believed that the earlier that you spay or neuter your pet, the better off he is.

But, in more recent years, there has been a recommendation to hold off on fixing your dog until he has reached maturity.

The pros for neutering or spaying early are that you will not need to worry about your dog running off, accidentally getting a dog pregnant, or becoming pregnant. It has also been shown to prevent some kinds of cancer.

Waiting for your pup to reach maturity will allow your dog’s bones to grow completely.

In large breeds, spaying or neutering too young can cause bone and joint health issues. Lhasa Apsos are not a large breed, so this will not affect them. 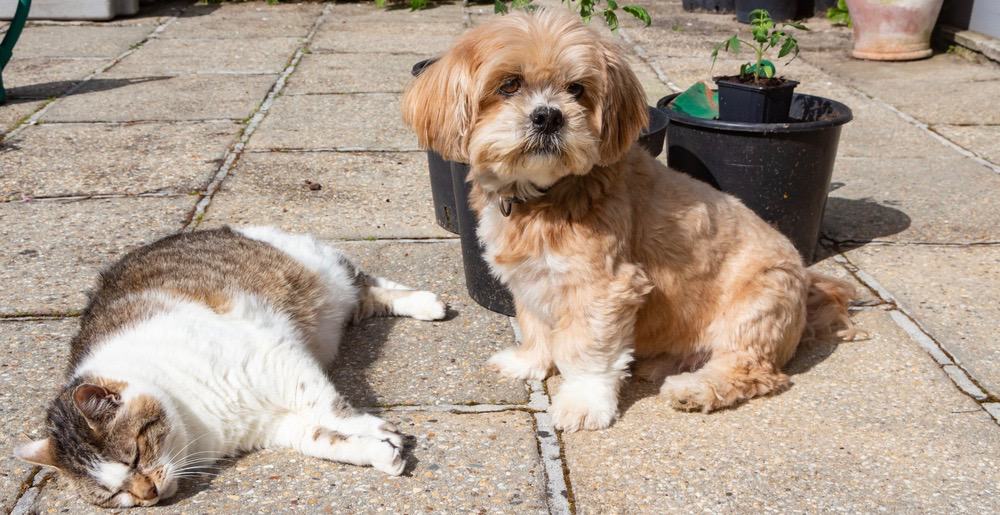 Part of the growth of a Lhasa Apso is knowing how tall your dog will be as well. Of course, Lhasa Apsos are not very big dogs, so they will not have a large height to worry about.

The difference in height between males and females is non-existent, though males are usually heavier in weight.

The average height for a Lhasa Apso is between 10 and 11 inches or 25 to 27 centimeters.

To measure your dog’s height, you will need to have him stand on all-four legs and measure from his shoulder to the floor. This is how height is measured in dogs.

Just like with weight, the height is an average, so your dog could be smaller or taller than that.

Though Shih Tzus have Lhasa Apso in them, they are not the same breed of dog.

In terms of size, Lhasa Apsos are a little bit taller than the Shih Tzus are. Lhasa Apsos are 10 to 11 inches in height on average, while a Shih Tzu is between 9 and 10.5 inches tall.

Weight-wise, a fully grown Lhasa Apso is between 12 and 18 pounds, on average, while a Shih Tzu is between 9 and 16 pounds.

Beyond the slight difference in size, the breeds do have different appearances. Lhasa Apsos have longer fur, going all the way to the floor and parted in the middle.

Shih Tzus have long double-coats, but it is nothing like a Lhasa Apso’s. 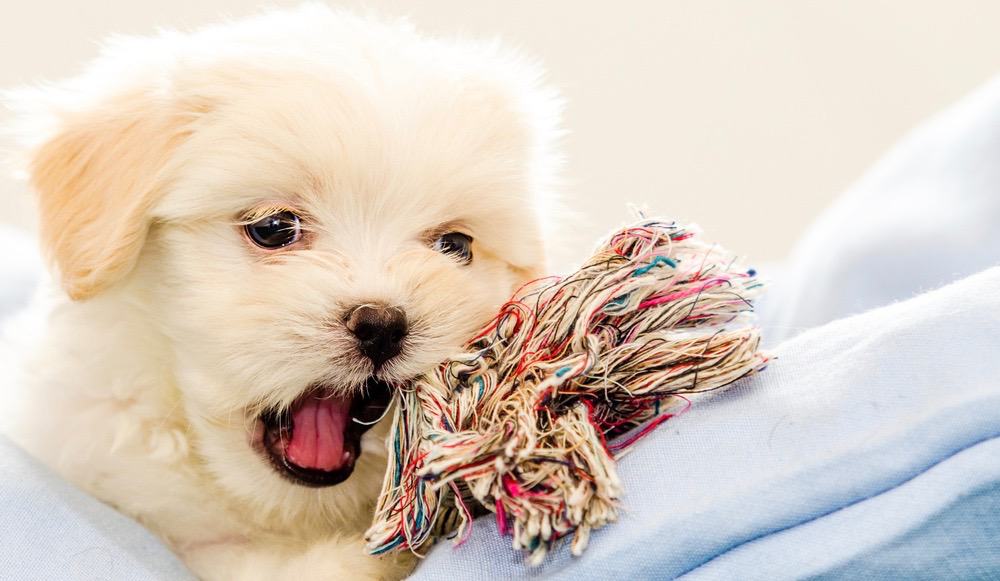 When you are looking at what factors affect the growth of a Lhasa Apso, one of the first things that come up will be the genetics and gender question.

As far as genes go, they will be about the same size as their parents. It is definitely the biggest factor that determines how big your dog will be.

Gender does not have much to do with a Lhasa Apso’s growth since the difference between the two genders is negligible.

There is a common phrase that floats around about “stunting your growth,” as if consuming certain things will result in you being smaller.

This is not the case with Lhasa Apsos. Nutrition has very little to do with a dog’s physical growth, though it can affect how healthy he is in the future as well as the strength of his bones.

It is best to feed your dog a balanced and healthy diet to ensure that he will grow strong, though poor nutrition will not affect his size.

Finally, physical activity and the health of your dog can affect his overall growth. It may not be noticeable when it comes to his physical stature, because the breed is small, but it can affect growth in terms of bones, joints, and organs.

If your dog does not have enough exercise and becomes overweight, he could have too much weight on his developing joints, causing major issues when he is older.

What If My Lhasa Apso Is Not The Right Weight

If you are looking at the weight chart and your Lhasa Apso and thinking that your dog is nowhere on the chart that you would expect him to be, do not panic.

The first thing to do is check that you are looking at the right age and weight for your dog.

Remember that the weights that are listed on the growth chart are averages. That means there will always be dogs that are either smaller or larger than the average. 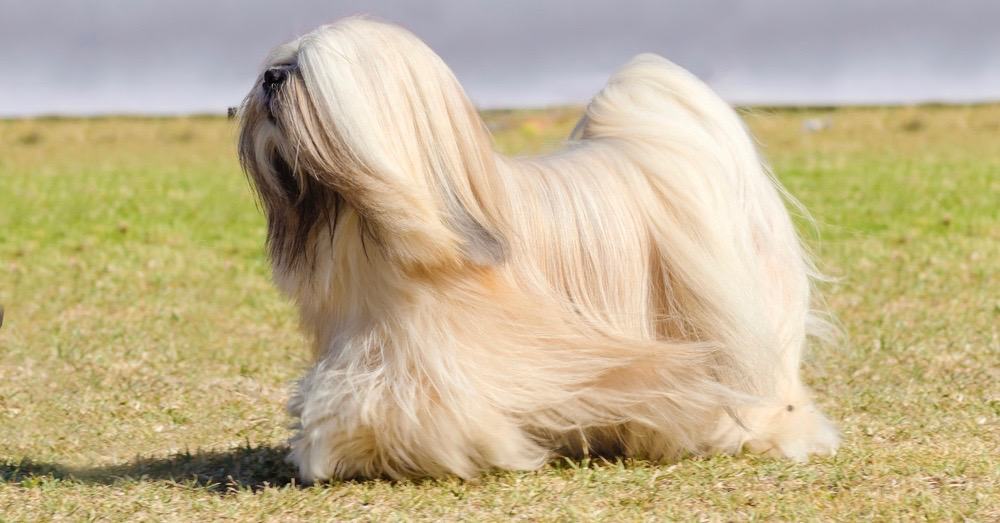 As long as your dog is growing consistently along the same curve, there is nothing to worry about.

The only concern should be if your Lhasa Apso is too thin or overweight. Both conditions can be concerning and should be addressed with your veterinarian.

You should keep a log of your dog’s weights as well so that you have something to show your vet to help determine what might be causing a weight issue.

All purebred dogs are at risk of developing some kind of health condition to be on the lookout for.

Luckily, there is not a lot to worry about with the Lhasa Apso. This breed is robust and healthy, with few genetic issues.

The most serious health issue that a Lhasa Apso can inherit is kidney dysfunction. This can be mild to severe, and there is no way to check for it before adopting the dog.

It is treatable in the milder forms, but anything to do with organ dysfunction is not great.

Other than that, Lhasa Apsos are a little bit on the lazy side and do have a risk of developing obesity if not properly fed and exercised.

Obesity can lead to a wide variety of health conditions, and given their natural laziness, it is hard to get a Lhasa Apso to lose extra pounds.

Once you have decided that Lhasa Apsos are the perfect dog for you, you will need to make sure that you take care of it to the best of your ability.

Using a Lhasa Apso growth chart will help you monitor your dog’s size in comparison to his age, guiding you to keep him as healthy as possible.

Just remember that all dogs are different sizes and your dog might not be within the averages of weight and height.

That is ok; just make sure your dog is growing consistently by feeding him the right type and amount of food and giving him love and exercise.