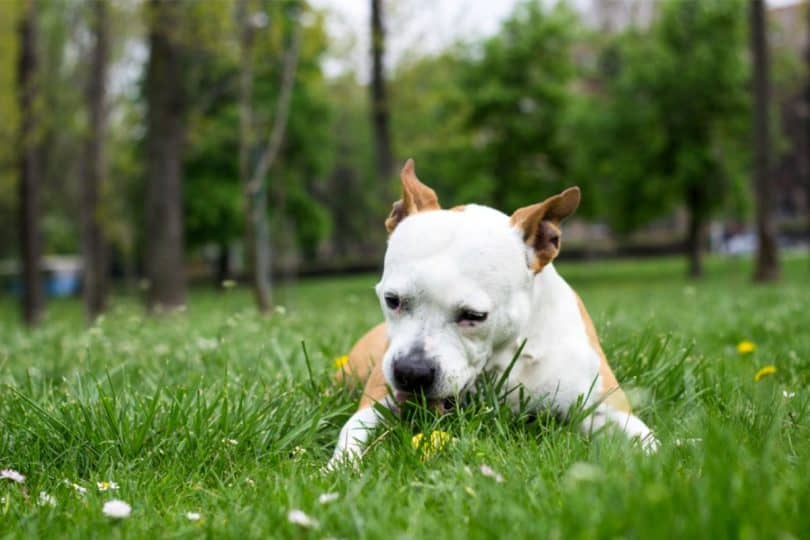 If you’ve ever owned a dog, or known someone who has, you may be well aware that some dogs have very strange habits.

The mystery of poop eating has baffled us for generations. If you live in a state or country where there are plenty of deer, you might notice that deer feces is a popular snack for some dogs.

Gross, right? Dogs do a lot of gross things, and unfortunately, this is just one of them.

However, today we’re going to focus on this one. If you’ve noticed your dog eating deer poop, or simply have a morbid curiosity, stick around. Today, you’re going to learn all about this strange behavior and what it could mean.

Did you know that around 16% of dogs eat poop consistently, according to a study done in 2012?

This behavior is also known as coprophagia, and it doesn’t just stop at the poop of herbivores. Some dogs are known to eat human poop, each other’s poop, or even their own poop.

Are you counting how many times we’ve said poop, yet?

There are a few possibilities that may help us understand why our pups are digging into the deer poop when they get the chance. We’ll take a look at these possibilities down below.

Why Do Dogs Eat Deer Poop?

When trying to figure out what is causing our furry friends to eat deer poop, we’re often hit with a wave of confusion and disgust.

How could you not be disgusted, after all? Well, it’s important to remember that disgust, like beauty, is in the eye of the beholder. According to life experience, we will all know that a dog’s eyes see things very differently to ours.

It Gets A Reaction From You

We’ll start off with a reason that you might not necessarily gravitate towards immediately. Here’s something to think about – if your dog has ever eaten poop, what did you do?

Did you ignore the behavior? Or did you react very suddenly and very loudly?

If you reacted in a loud and sudden way, you’re not alone. However, when you did that, you gave your dog attention. Sometimes, all your dog wants is a reaction from you.

That isn’t to say that you’re not paying enough attention to your dog at other times, but your dog just likes attention.

Any reaction, even if it is seen as negative, is what’s wanted by both humans and animals. You’ll notice that some kids exhibit the same behavior, and you just need to learn to work around it!

Okay, you might be wondering how you would do that. Don’t worry, we will get to that in the “Preventing Your Dog from Eating Deer Poop” section in a short while. Just hang on!

This might not be what you want to hear, but maybe your dog just likes the taste and smell of it. We know, we know – how?

But remember – beauty is in the eye of the beholder, and dogs tend to like some really bizarre stuff. What might smell and taste absolutely disgusting to us is a real treat to them, and the opposite is true, too!

There is a real possibility that your dog just really loves the aroma of deer feces (or any other kinds of feces, too). If that’s the case, we don’t know what to tell you.

They Learned It From Other Dogs

Another possibility for this behavior is that they learned it from other dogs. If you were acquainted with a dog that likes to partake in coprophagia before your dog started doing it, you’ve likely found the reason.

Like humans, dogs can learn behaviors pretty easily. If they see another dog participating in a certain behavior, there’s a good chance that they will try it out, too.

They would have to see the behavior repeatedly for them to do this, though. There’s a near impossible chance that a dog will copy a behavior that they only see once. 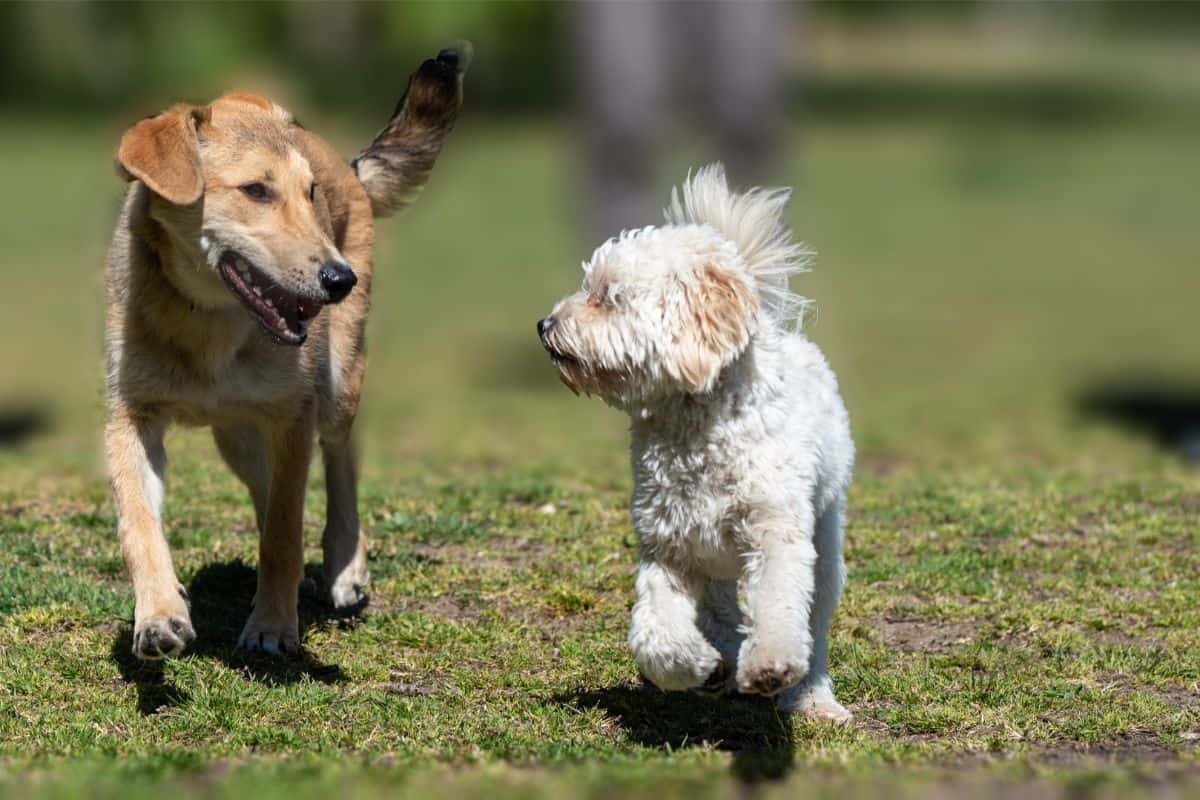 So, if your dog is best friends with the neighbor’s dog, or you have another dog that likes a certain gross diet, you know where to look.

Unfortunately, it will just be a case of dealing with your dog’s behavior and trying to get them to stop it.

If you’d like to check out some studies looking at dogs eating poop, check out these! This one talks about the majority of poop-eating dogs being labeled as “greedy”.

This second one takes a look at how dogs that live with a poop-eater are more likely to learn the behavior.

They Have A Parasitic Infection

It is thought that parasitic infections could also lead to your dog ingesting deer poop when they get the chance.

If your dog has a parasite, they might not be getting all the nutrients they need to survive, and they might see eating deer poop as a way to get them.

This possibility might seem pretty unlikely, because there appears to be mixed evidence about poop eating and lack of nutrition. However, until more evidence mounts up for either argument, it’s always worth mentioning.

They Are Malnourished / Have A Deficient Diet

This point is somewhat similar to the one above, but without the parasites. If a dog is malnourished, there is a possibility of them eating things like grass or deer poop in an attempt to get those nutrients they need.

Once again, however, this has gotten mixed views. Malnourished dogs eating poop does happen, but it also happens in dogs who are not malnourished.

While it is entirely possible that it could happen because of malnourishment, we can’t help but think that there should be plenty of other stuff to eat, right?

After all, one study found that there were no differences in lifestyle, sex, diet, and number of meals eaten by dogs who eat poop.

Is Deer Poop Nutritional To Dogs?

Those possibilities lead us into the next question nicely – is deer poop even nutritional to dogs? Well, yes and no.

Since deer primarily eat things like grass and leaves, there isn’t a whole lot in their feces that would benefit a dog. However, their poop is a great source of fiber.

Why is this important?

Fiber helps to keep the gut moving. This is also the primary reason why some dogs like to eat grass every now and then. They need to poop frequently, too!

The Dangers Of Your Dog Eating Deer Poop

With that being said, there are a couple of dangers of dogs eating deer poop that we should be aware of. Let’s take a look at them below.

Giardia is a teenie tiny parasite that can affect any number of mammals. That includes deer, dogs, and even humans!

They can also get it from stepping on poop and licking their paws afterwards, so it’s really easy to spread. There are a number of different types of Giardia.

At least there’s something to be thankful for, huh?

Leptospirosis is a bacterial infection that can be spread through the urine of animals that are infected. While fecal matter is not urine, we all know that the two typically go hand-in-hand.

Where there’s poop, there will be pee, too. For this reason, there is a very high chance of Leptospirosis being present in fecal matter, or at least the surrounding area.

While dogs probably won’t pass it on to each other, humans can contract it. To treat it, a course of antibiotics is needed.

Either that, or hydration therapy or dialysis will be required, though the treatment would be up to a vet.

Can Your Dog Catch Parasites From Eating Deer Poop? 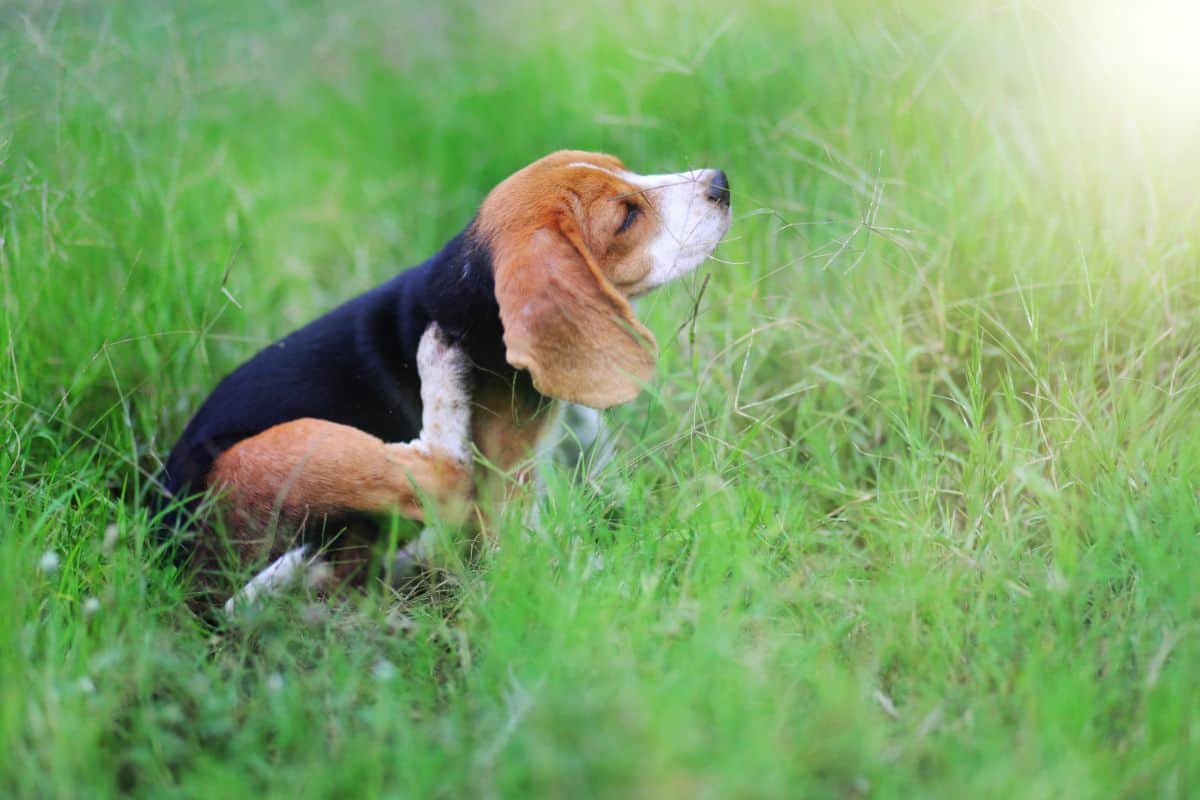 While your dog is very unlikely to get things like tapeworms or roundworms, they could get other parasites. Parasites can be passed from deer carcasses to dogs, but it’s unlikely for any parasites to be passed on through poop.

Thankfully, there are no known viruses that are likely to be passed from poop to dogs. Another thing that you can be thankful for!

There’s no surprise that eating poop poses a risk of eating a whole boatload of bacteria. Things like Salmonella or E.Coli can be found in things like deer poop, but dogs can usually handle these pretty well.

You only really need to be worried about these kinds of bacteria if you have an elderly dog or a puppy, since they are less capable of dealing with these issues.

If your old dog or puppy has gotten their paws on some poop, you will need to keep an eye on them. If you notice any signs of discomfort or sickness, you should take them to your local vet immediately.

Also, be sure not to let them lick you if you notice that they have consumed poop.

Now that you’ve read about the potential risks of your dog eating poop, you are probably wondering how you can prevent the behavior. Well, let’s take a look.

The most important thing for you to do is to teach your dog the “leave it” command. Your dog needs to be obedient with these commands, because it’s for their own good!

By teaching your dog the “leave it” command, you should be able to prevent them from eating or even going near deer poop the next time you’re out somewhere.

Another easy yet effective way to stop your dog from eating deer poop is to keep them on a leash. There really isn’t a lot to say about this one!

Remember what we said about you reacting to your dog eating deer poop? Avoid doing that. Act calmly, and don’t give them the reaction that they are looking for.

When they learn that you aren’t going to give them that reaction, they are likely to stop the behavior.

What You Should Do If Your Dog Eats Deer Poop

Usually, you won’t need to do anything. Contact your vet if you’re worried, but this isn’t always necessary. If you notice your dog acting strangely or appears to be unwell, get in touch with your vet.

You reached the end! Well done for managing to get this far – the topic isn’t one that you would read for fun, I’m sure.

Poop-eating dogs is an unfortunately, yet very real thing that we have to deal with. While there are a few odd reasons as to why your dog might be eating deer poop, it isn’t usually too dangerous for them.

Danger or not, however, it isn’t something you want your dog to be doing. They like to lick your face, remember?