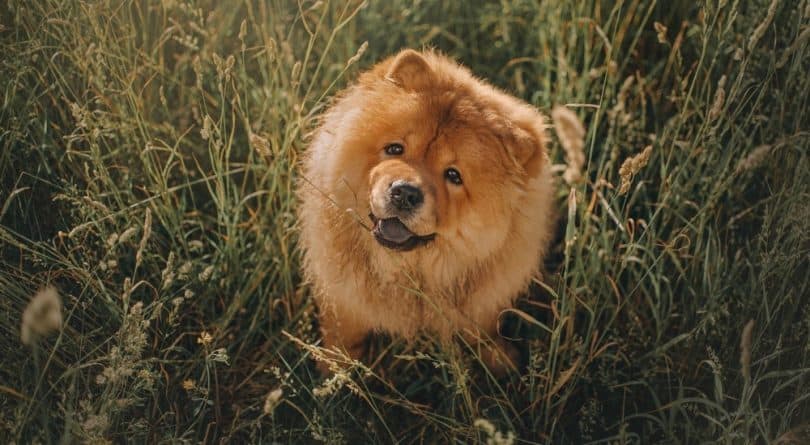 Chow Chows are a more unique dog breed. With a strong personality and sense of self, they can be extremely loyal and protective.

If you are considering adopting a Chow Chow puppy, it is a good idea to consult with a Chow Chow weight chart to know what you are getting into when it comes to their size.

We have broken down everything that you will need to know about a growing Chow Chow, from the average final size of the breed to the factors that will affect a Chow Chow’s growth.

When Is A Chow Chow Fully Grown? 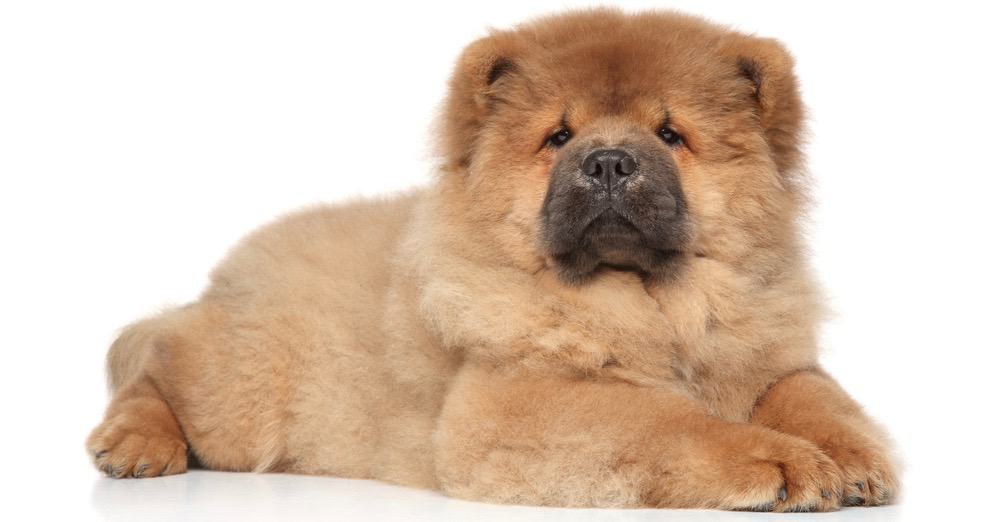 If you look at a Chow Chow growth chart, you will get an idea of how big a Chow Chow gets as an adult, but you still might wonder when a Chow Chow is actually considered to be fully grown.

Most dogs are considered adults at 12 months of age, but that doesn’t always mean that they have stopped growing at that point.

By their first birthday, Chow Chows will be at their final adult height, though there is some variety between dogs. Your Chow Chow might continue to gain weight until he is about 18 months, but shouldn’t gain more height.

You can easily use a Chow Chow weight chart to help guide you through the growing process as your puppy makes his way to adulthood.

It is really important to remember that these charts are based on averages, so your dog may be bigger or smaller than these averages.

To use the weight, you will find your dog’s age and follow the chart to see what the average weight is for your dog. Female Chow Chows are generally smaller than male Chow Chows.

For example, if you have a 4 month old female Chow Chow, you can follow the Chow Chow size chart to see that the average weight is between 23 and 30 pounds.

The weight chart can also be used to help you estimate what your dog will weigh as he gets older.

So, if your 4 month old female Chow Chow is at the lower end of average, weighing 23 pounds at 4 months, you can expect your Chow Chow to weigh 43 pounds when she is 12 months old, as long as she stays on her growth curve.

If you have a male who is on the larger size of average, weighing 40 pounds at 4 pounds, you can use the chart to see he should be about 68 pounds at a year. 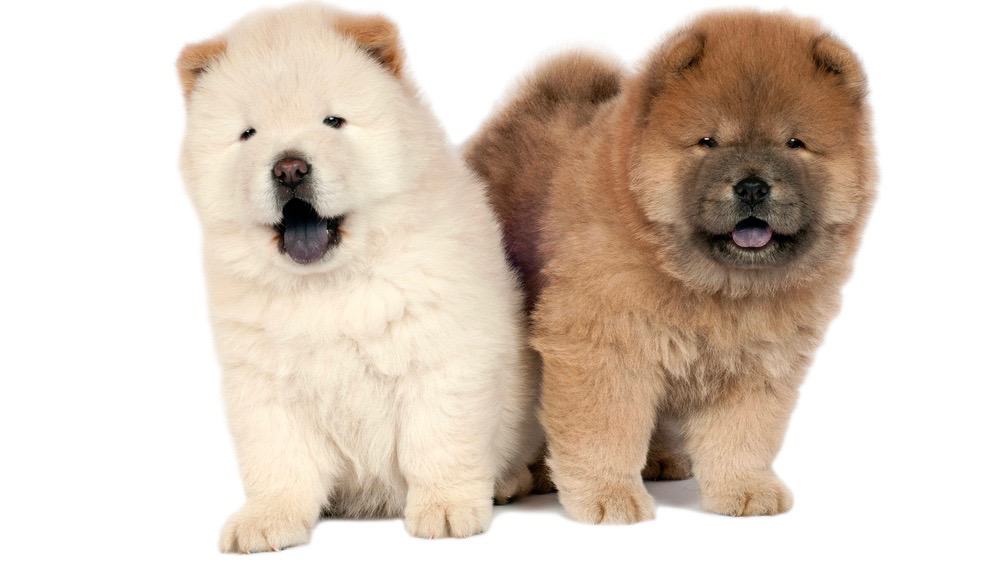 When a Chow Chow is born, the puppies usually weigh less than a pound. The birth weight will depend on the size of the mother, the health of the mother, and the amount of puppies that are in the litter.

The larger the litter, the smaller the puppies. Chow Chows usually have between 4 and 6 puppies at a time. By 2 weeks old, the puppies should weigh around 2 pounds. Males are usually bigger.

There are some major growth changes between 3 weeks and 12 weeks of age. While your Chow Chow might weigh around 3 pounds when he is 3 weeks old, when he reaches 12 weeks old, he could weigh anywhere from 18 to 26 pounds, depending on whether your dog is male or female and his natural genetics.

This is also the time that puppies are rehomed away from their mothers and they have switched from milk to puppy kibble.

You will see some big developmental changes between 4 months and 9 months old. The average weight of a Chow Chow puppy at 4 months is between 23 and 40 pounds, while at 9 months, the puppies will be somewhere between 40 and 63 pounds.

The spread between the male and female weights also increases dramatically during this period, with the size difference becoming more and more notable between the sexes. 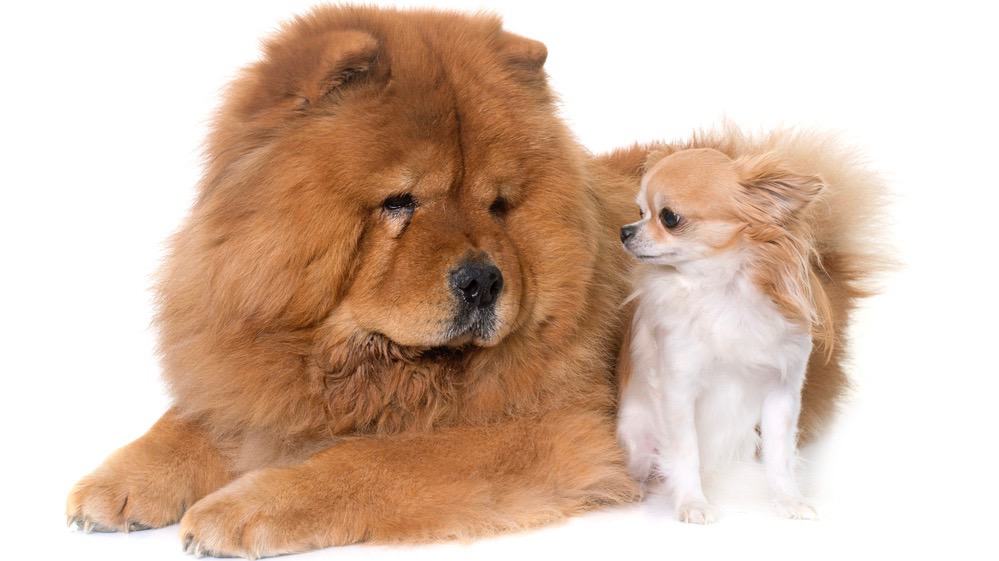 At 10 months old, the average Chow Chow puppy weighs between 41 and 63 pounds. The growth of a Chow Chow will be slowing down dramatically.

After 9 months, your Chow Chow might gain a little bit of height, but really, the dog will be about the size that he will be when he is an adult. He is not done gaining weight just yet though the rate that he gains weight will slow down quite a bit.

When a Chow Chow is 18 months old, he should be all done growing. The adult female Chow Chow weighs between 44 and 60 pounds, standing at about 18 inches tall.

By comparison, the male Chow Chow weighs between 55 and 71 pounds on average, standing about 19 inches tall. There are a lot of different factors that will affect the final adult size of a Chow Chow as well and your dog might not be within this range.

How Big Do Chow Chows Get?

As we mentioned above, the average size for an adult Chow Chow is between 44 and 71 pounds, depending on whether you have a male or female dog.

After looking at a weight chart for a Chow Chow, there are other ways to get an idea of your dog’s adult size. 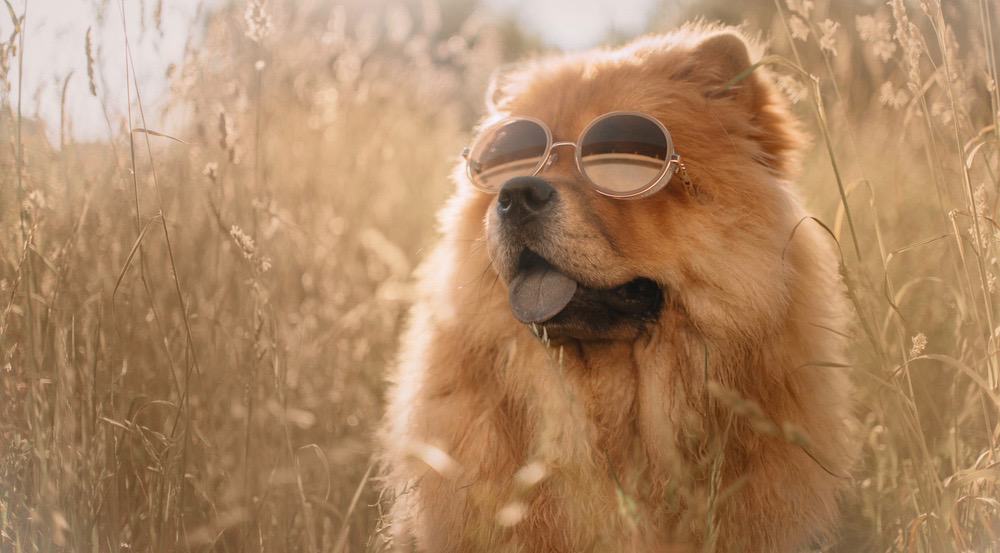 If you can look at your dog’s parents, that will be a huge indicator of final size. It is pretty common for a dog to be the same size as his parents. You can also look at the size of your dog’s paws to see how much growth he needs to fill them out.

You can also use a dog DNA test for further guidance.

Will Neutering/Spaying My Chow Chow Affect His Growth?

Traditionally, it was recommended that you spay or neuter your dog when he or she has reached 6 months of age.

The goal here was to eliminate the risk of going into heat or impregnating a female by sterilizing them before complete maturity happened. Yet, more recent science has gone against this idea, because of how it can affect a dog’s growth.

While spaying or neutering your dog while he is growing will not stunt his physical growth or height, it can affect his growth within his joints.

It has been shown that especially with larger breeds, the joints will not grow properly if a dog is sterilized too young. It is best to wait until the dog has finished growing.

As we mentioned above, the average adult height for a female Chow Chow is 18 inches, while a male is 19 inches. The difference in height is pretty slight between the sexes, though they do have significant weight differences.

When measuring your Chow Chow’s height, you will need to have your dog standing on all four legs. Then, using a tape measure, measure the dog from the highest point on his back to the floor.

You can do this as the dog is growing in order to get an idea of where your dog is on a Chow Chow growth chart.

The Tibetan Mastiff is considered a large breed, but not a giant breed. The average weight of a Tibetan Mastiff can range from 100 to 160 pounds, compared to the Chow Chow who is 70 pounds on the high-end.

One of the biggest factors that will determine your Chow Chow’s size is the dog’s gender and genetics. Genetics includes how large your dog’s lineage is.

Dogs will smaller parents will naturally be smaller and dogs with larger parents will be larger. Likewise, female Chow Chows are smaller than males, though in height, there is not a lot of difference. The difference between males and females really shows up when it comes to weight.

It is so important that you provide your Chow Chow puppy with the best nutrition possible. Good nutrition will help your dog grow in a lot of ways, though poor nutrition will not stunt your dog’s growth. 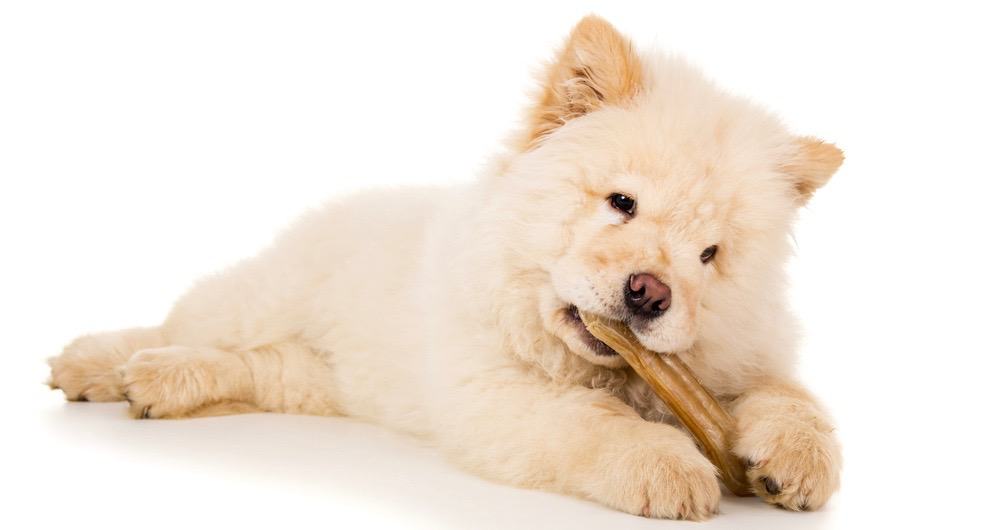 It will, however, affect how well your dog’s bones and joints grow, which can harm your dog’s mobility as your dog ages. It might not affect his height right away, but poor nutrition can cause him to slouch when he’s older.

The physical activity and health of your dog should always be important to you. If you allow your Chow Chow to be an overweight dog, then he is more likely to have joint issues as there is too much pressure put on his developing joints and bones.

Keep your puppy physically active and healthy in order to set him up for the best life possible. You will also allow him to be a happier puppy as a result.

What If My Chow Chow Is Not The Right Weight

If you are looking at your Chow Chow and realize that either his ribs are too prominent or you cannot see your dog’s waist at all, your Chow Chow might not be the right weight.

The first thing to do when you are worried about weight is to ask your vet for guidance and to confirm that there isn’t anything medically wrong with your dog.

If your Chow Chow appears to be underweight, you should increase the amount of food that you are feeding him. Puppy needs fluctuate depending on growth spurts, making it all the more important that you monitor weight gain.

If your puppy is looking overweight, you do not want to cut out the quantity of food. Instead, look at the ingredients of the food that you are feeding him.

How Much Does It Cost To Own A Chow Chow?

When looking at adopting a Chow Chow, the cost of owning one should come into play. If you are adopting one from a breeder, you can expect to pay somewhere between $800 and $3,000, depending on the bloodline of the puppy and the breeder.

Like all purebred dogs, Chow Chows do have a higher tendency of developing certain health problems than others. It is good to know ahead of time which conditions you might have to pay for and deal within the future. These include:

Hip dysplasia: This is a common condition where the hip joint does not develop correctly. It will not be obvious when the dog is younger, but as he ages, he will become less and less mobile.

Patellar luxation: This is a knee condition that is similar to hip dysplasia. It is something that will not show up right away but can affect mobility as the dog continues to age.

Autoimmune Thyroiditis: This is a thyroid condition, where the thyroid does not behave as well as it should. It can be treated with medication.

Eye conditions: Chow Chows are prone to a variety of eye conditions from cataracts, glaucoma, and distichiasis. These can all result in blindness.

Chow Chows are definitely a special breed to own. With their unique characteristics and strong personality, in the right home, they are truly a blessing.

But, since they are a larger breed of dog, you need to know what to expect as far as the dog’s size goes. This way, you will be able to anticipate how large the dog will get and how much he will eventually cost.

You can consult with a weight chart to know what to expect as your puppy continues to grow. Keeping up with routine vet visits will help you make sure that your dog is growing as well as he should be.