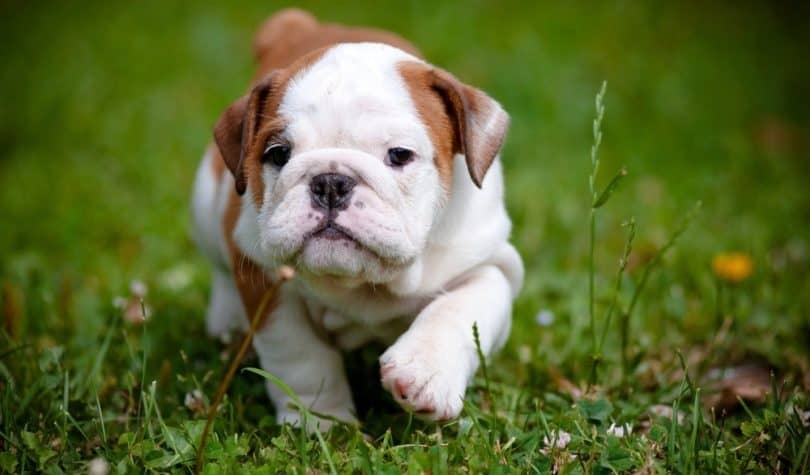 Although English bulldogs may look like they can take you down, they tend to be more gentle-loving, calm, and actually a bit lazy! Therefore, keeping aware of their growth progress through an English bulldog growth chart and keeping track of how they are moving throughout the day can help you monitor both their weight and height.

Especially if you are a first-time English bulldog owner, learning about the ins-and-outs of the development of your dog can be a bit confusing at first. When it comes to weight, you especially need to be careful with exercise and diet.

In this article, we’re going to inform you about questions you may have, like “When do English bulldogs stop growing?” or “How big will my bulldog be?”

When Do English Bulldogs Stop Growing?

If you’re fortunate enough to get your English bulldog when he or she is still a puppy, then you’ll be able to start getting them used to walks early on, which can help keep them healthy and within a healthy weight range (according to the English bulldog weight chart below).

But when do actually they stop growing? Once an English Bulldog is around one year old, they should reach their maximum weight—which will be around 48-50 lb for a female and 52-55 for a male.

Let’s get into a closer look at the weight of an English bulldog. 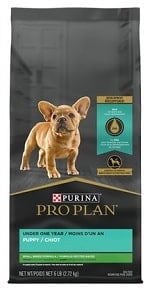 You can use the English bulldog weight chart listed below to closely monitor your pup’s weight as he or she grows from pup-hood well into adulthood. This can help you make sure your pup is developing as he or she should.

Even though these sorts of numbers will be recorded every time your pup heads to the vet, it’s a good idea to also keep track at home just in case anything drastically changes!

In the chart below, you’ll be able to monitor your English bulldog’s weight. This can help you see if your pup is on track when it comes to weight and size.

Just like with most other breeds of dogs, an English bulldog is considered to be fully grown around one year old. Although there might be a shift in weight with exercise and diet, you can most likely expect your pup to reach their final weight and height around 1 year and up to 18 months.

Please consult the chart below if you have any more questions or speak to your dog’s vet.

If you get your pup right out of the litter, then there are certain stages to keep track of and certain milestones or characteristics you can come to expect. 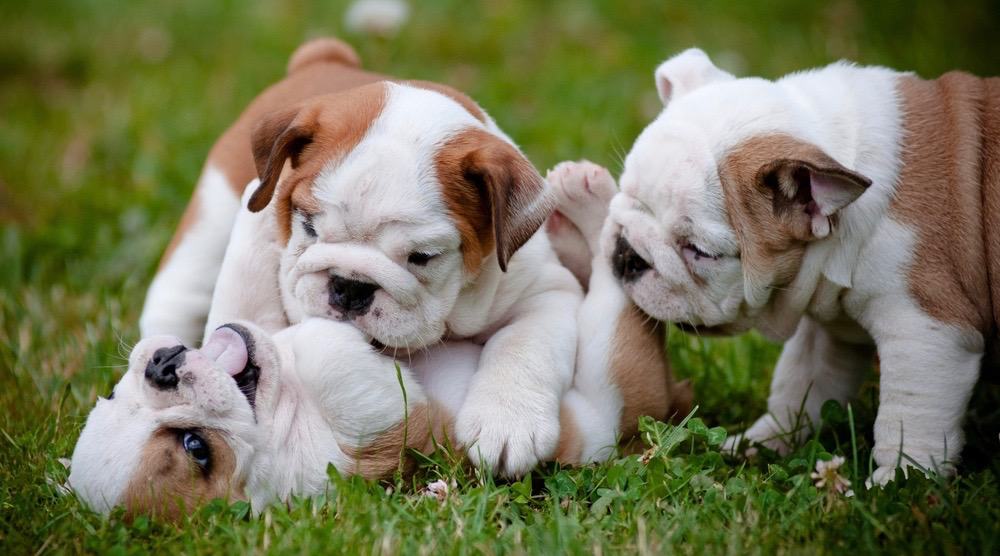 When your bulldog is a newborn, they won’t be doing much but simply staying alive, sleeping, and feeding. Their early lives are characterized by being with their eyes closed in the first few days. They also don’t react that much when it comes to exterior sound.

As they proceed over the next few weeks, they’ll start to dive into their world, both visually and audibly. They’ll react to sounds, open their eyes, and find ways to communicate with you or with their dog mother.

During this period, you can expect them to go from 5 pounds to 15 pounds! This means there will be rapid changes in size and weight! They’ll also get moving around, exploring energetically and actively. You can also start to introduce solid foods into their diet.

At this stage in their development, your bulldog should be getting around 30-45 lbs. Your English bulldog is considered to be almost fully grown at this point and has budded into an independent, young adult!

Their personalities will also tend to come out at this point, showing their stubbornness and strong will since they are often regarded as having a pretty dominant-style personality. If you have multiple English bulldogs, you’ll also notice a fight for dominance in the family, so don’t be alarmed if they get into a tussle or two!

This is where the English bulldog will reach full maturity—around a year old! These fully-grown bulldogs, as we mentioned before, will be anywhere from 52-55 lbs for both males and females (with outliers and exceptions to the rule, of course). At this stage, some experts consider this breed to be fully grown.

As your English bulldog explores adulthood, you’ll notice a development in the emotional and intelligence of your furbaby. Although physically they don’t have much more to grow, this is a great time to get them acquainted with other people, animals, and even new tricks to help them stay sharp as they age.

Just like with humans, not all English bulldogs are the same! As your pup develops and grows, you may notice a difference with your own dog’s development and the statistics on the chart above. This can be due to:

If you have the family history of your English bulldog, this can help predict whether or not there will be any genetic ailments in your dog’s health passed down from the parents. Just like with humans, you can tell a lot about your dog’s future health when you compare it to the parents or parental lineage of your pup!

What you feed your dog (especially your generosity of treats) can play a huge role when it comes to keeping your dog healthy and within the target weight range for their age.

If you’re concerned about the weight of your English bulldog, please speak to your pup’s veterinarian about different diets and brands of foods you can give your pup as they develop so you’re able to manage their weight but still give them the adequate nutrition they need to grow.

A healthy diet can only take your pup so far when it comes to keeping in shape! Since this type of breed is short-statured, you’ll definitely have to keep an eye on how active they’re being, since this can play a huge role when it comes to staying within their healthy weight range.

Taking your dog on a daily walk can also be a healthy reminder for you to be active, too!

How Long Are English Bulldogs Pregnant?

If you’re in luck and are going to become a first-time doggy-grandparent, then you’ll definitely want to get informed about the gestational period of an English bulldog.

The length of the pregnancy can change depending on when the egg was fertilized to when it is actually embedded in the lining of the uterine horn—and also a number of other factors.

How Many Puppies Do English Bulldogs Have?

So—how many grand-fur-babies will you be having? The average litter of a pregnant English bulldog will generally be around five or six puppies—which can be vary based on a few factors.

It can be as few as three to four puppies but as high as six. Your dog’s vet will be able to identify early on how many pups are going to be delivered with x-rays scheduled in the eighth week of pregnancy. This can help with planning and preparations beforehand!

What If My English Bulldogs Is Not The Right Weight

When it comes to developing, your English bulldog may actually be a bit under or overweight at any stage.

Although a pound or two out of range shouldn’t bring any substantial cause for alarm, if you notice that your pup isn’t hitting the mark by a lot or is missing the mark by quite a few pounds, it should be time to consult your doctor about the various factors that can affect their development, like daily exercise and diet.

If your English bulldog is overweight, you should try and add in more exercise and control their diet. Being overweight can increase the risk of a bulldog to get hip dysplasia, osteoarthritis, cancer, liver disease, diabetes, high blood pressure or heatstroke.

However, before making any drastic changes in their diet or daily activity, consult your dog’s vet to rule out other underlying health problems. This can reduce the risk of something going wrong!

What Is The Life Expectancy Of An English Bulldog?

You can expect your English bulldog to stick around for about a decade! The general lifespan of this breed is going to be around 8 – 10 years old.

How Much Does It Cost To Own An English Bulldog? 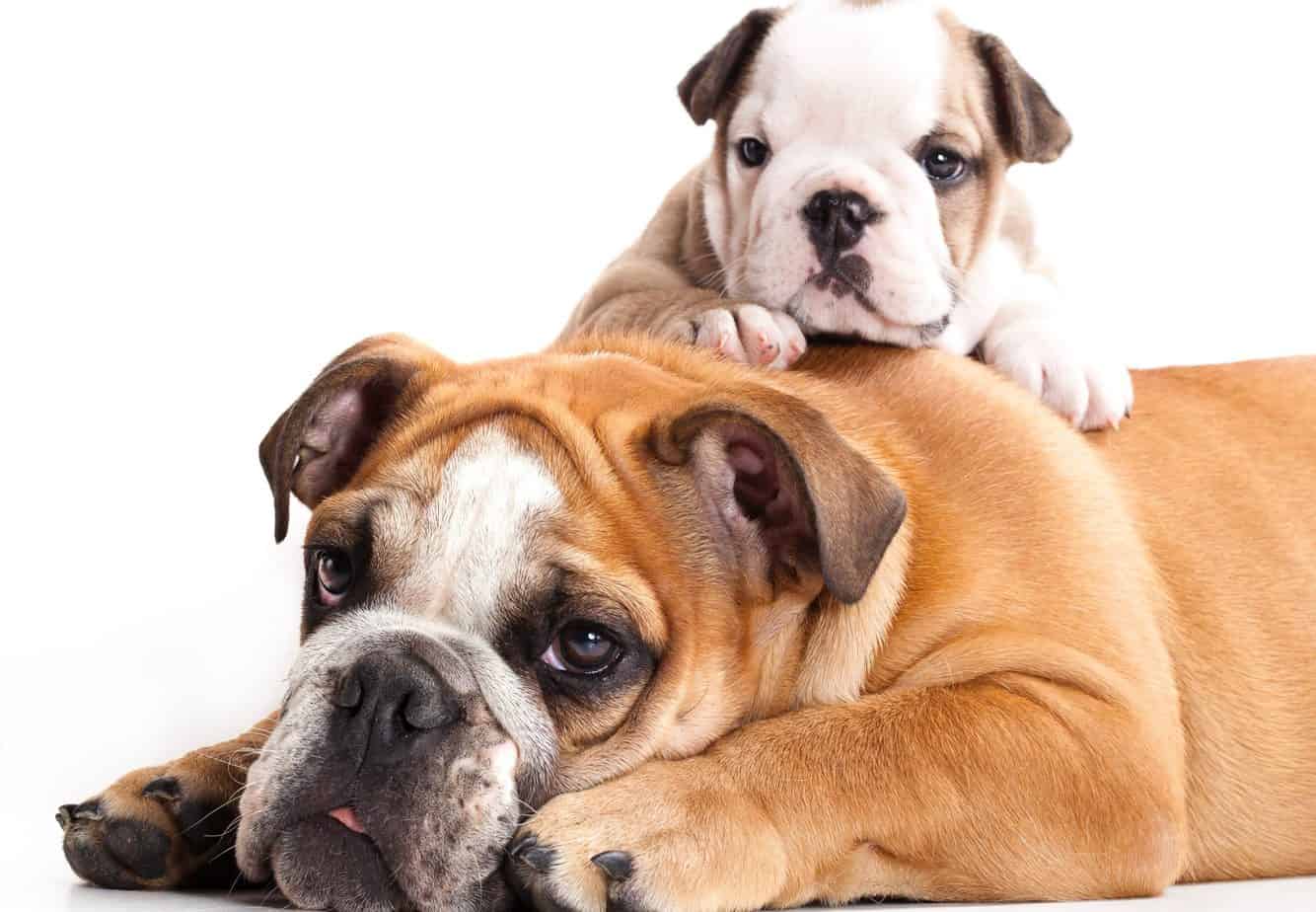 Within the range of other bulldogs, the English bulldog seems to take the cake when it comes to cost. Rated as one of the most expensive bulldog breeds, the initial price of this dog can be as “little” as $1,500 and can read up to $4,000! And this doesn’t account for the costs of everything else that comes thereafter.

As we just mentioned, although you can help control your dog’s diet to reduce the risk of developing some of these medical problems, your English bulldog can still be at risk of developing cardiac or respiratory disease, some hip dysplasia, and even something called cherry eye, which is when a tear gland in a dog’s eyelid becomes inflamed.