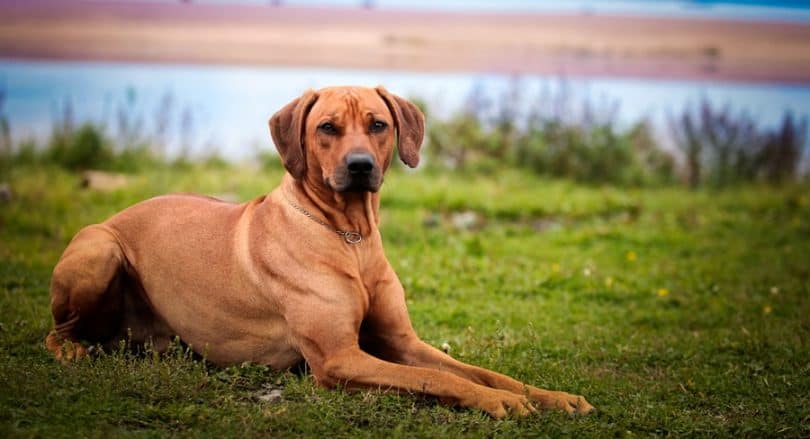 When thinking about adding a new puppy into your home, you also need to consider the size he will be when he develops into adulthood.

Since puppies don’t stay small forever, so having a Rhodesian Ridgeback growth chart will prove useful to dog parents.

Bred in Africa the beautiful Rhodesian Ridgeback dog breed was meant to be an expert hunter and home watch.

Things have changed in recent times because they probably no longer hunt lions but they still enjoy staying acting and spending time with their favorite humans.

Rhodesian Ridgebacks are known to be formidable, domineering, strong-willed, and sometimes independent.

They make loyal best friends who will fight aggressively to protect their loved ones. They are also very fond of the humans with whom they share a bond.

Rhodesian Ridgebacks need to be properly trained at an early age so that they won’t have behavioral problems. Despite this, Ridgebacks may be too much of a handful for the inexperienced dog parent.

When Is A Rhodesian Ridgeback Full Grown? 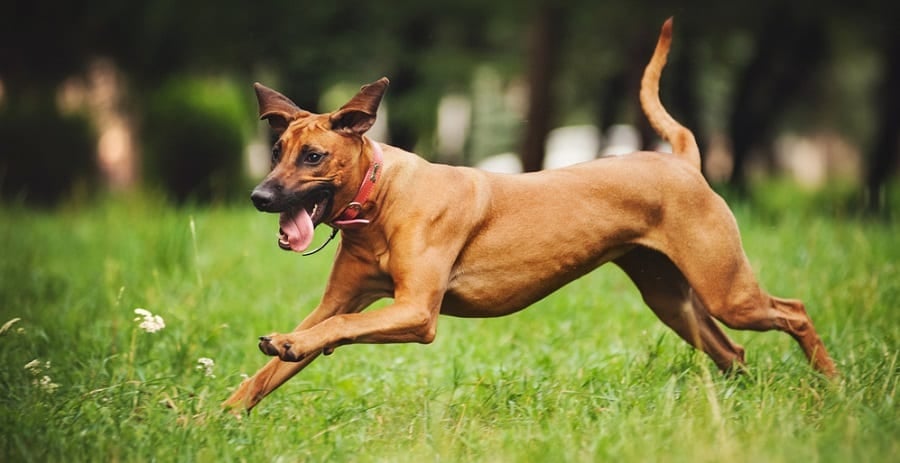 Rhodesian Ridgebacks are big, solid, and strong dogs who may require over 12 months to attain their adult sizes.

That said, adult male Rhodesian Ridgebacks are slightly different in size than females, as the males usually weigh more and have a taller height.

Based on the breed of dog you have, you can expect the puppies to develop into their adult sizes at different time frames.

However, within the same dog breed, there can be slight variations based on nutrition, levels of physical activity, and genetics.

Many larger dog breeds will take as long as two years to complete their growth. This applies to both weight and height. Dog breeds that are small or medium-sized usually stop growing a lot faster with the average time being around 12 months.

When they are around 14 months old, Rhodesian Ridgebacks typically reach their adult weights and heights. Their basic growth is complete at this time, and all that may change is that they may become a little thicker or fuller in appearance.

The following chart provides your Rhodesian Ridgeback with an average size and weight. There are some cases where the weight may be lower or higher than what is listed in the Rhodesian Ridgeback growth chart. In most instances, this is no cause for any concern.

Nevertheless, you should remember that you may notice that your Rhodesian Ridgeback puppy’s weight is a lot lower than any of the numbers stated, you should take an assessment of his health.

Your Rhodesian Ridgeback may be too small, which means that he could be more prone to the development of particular issues of health.

On the other hand, if your Rhodesian Ridgeback puppy’s weight is a bit more than the figures stated, you also should not panic. Although he may not fall within the exact range, being a little over the weight range is normal.

Although it is not common, some Rhodesian Ridgeback dogs can grow to 95 pounds and still be healthy. Just ensure that you provide regular check-ups. You can feel free to look at the chart only as a guide and not a standard rule.

Rhodesian Ridgeback Growth – What To Expect 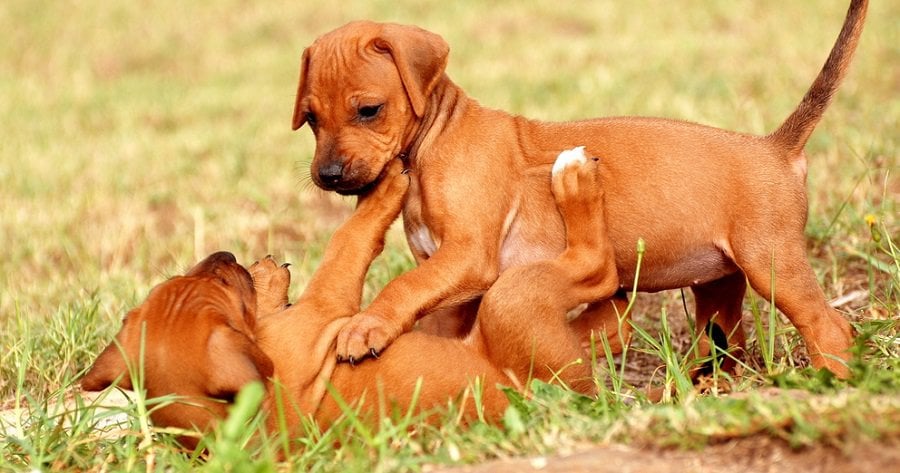 Your Rhodesian Ridgeback pups are at this period, they are not developed so they need their mother’s attention, heat, and sustenance. Their senses of smell, touch, and taste are there, but they are unable to hear or see.

These pups will most definitely be nursing and sleeping for the majority of this period so that they will be able to gain the strength that is necessary. Also, moving around is a problem for them as they are yet to develop muscles.

The development of his teeth will take place and he will enjoy physical activity with the littermates as he barks, runs, and plays.

Lots of exploring will take place as he attempts to navigate the surroundings in which he is placed. Both the bowel movement and bladder will see improvement as he matures. Muscle coordination will increase the more he is allowed to play and explore.

Your pup will want to sharpen his teeth during this time because adult teeth are starting to form. It would be wise for you to invest in some chew toys.

This will help to prevent him from destroying other important items that are lying around in his immediate vicinity. You should do your best to establish authority as the main influence in your puppy’s life. This will require quality time spent.

You can expect major changes in your puppy’s behavior as he deals with sexual maturity.  Your Rhodesian Ridgeback must pass through uncomfortable hormonal shifts that males and females experience differently.

Usually, the female dogs who go through sexual maturity enter a heat cycle for the duration of 2-3 weeks, twice per year. On the other hand, for the entire year, male dogs have periods sexual activity.

It is no surprise that Rhodesian Ridgebacks take approximately 14 months to reach adulthood. This is mainly because they are a larger dog breed.

They can be still very active, though playful in their adulthood phase. It is also still crucial that they receive proper nutrition and adequate exercise for strong muscles and bones.

How Big Will My Rhodesian Ridgeback Puppy Get

There is rapid growth for Rhodesian Ridgeback puppies as they only spend a short time in the puppy stage.

At 2 months old Rhodesian Ridgeback puppies are about just over 10 pounds, and he will get to between 30 and 40 pounds in a short span of around two more months. He may again double his body size in the months following that.

A Rhodesian ridgeback’s body deals with all of this demanding growth through good nutrition which should be provided by his owner.

There may be a few variations, within the breed when it comes to body and frame type. Dog parents typically use the current weight and age of their Rhodesian Ridgebacks and extrapolate, based on average data of the breed.

This is why having a Rhodesian Ridgeback weight chart can be very helpful for dog parents. 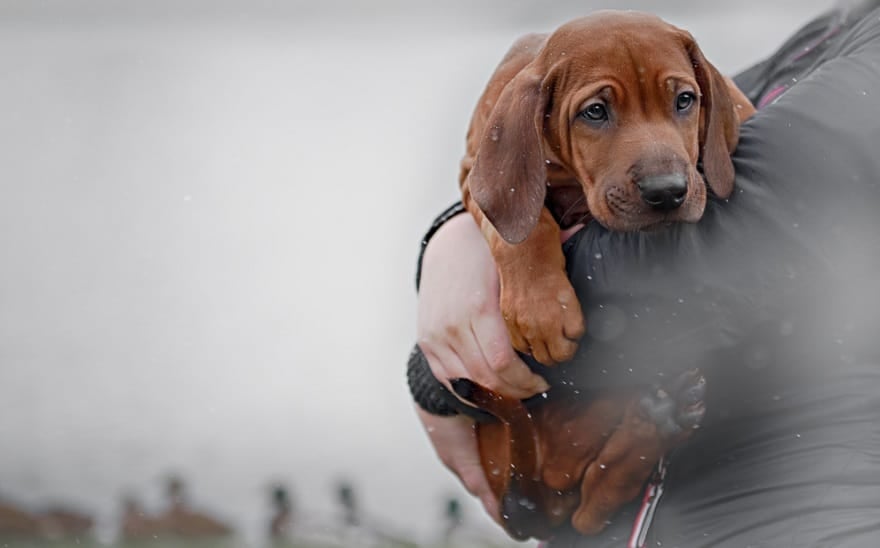 A typical Rhodesian Ridgeback may have a different development path than another dog of the same breed. This is because genetics is a big factor in growth and development. Just like with humans, biology determines growth rate, physical characteristics as well as predisposition to certain diseases.

For example, if one or both parents suffer from a certain disease, your Rhodesian Ridgeback may inherit this disease from them because the genetics are passed down. This is also the case with his growth and development.

This should go without saying, but always feed your pup the best food. This is because food directly affects nutrition and growth. This goes for any dog. If the right foods are not available during critical developmental periods then your dog may fail to meet certain developmental milestones.

Feed your puppy high-quality dog food by making sure that you investigate the ingredients and research the effect on your dog. You also have the option of cooking dog food for yourself. Whatever you decide, just make sure that he has a balanced diet.

A Rhodesian Ridgeback might become stressed if he doesn’t receive plenty of brisk exercises.

Give your Rhodesian Ridgeback plenty of exercise or he may become stressed and bored. He will do best in a spacious environment, especially one with a yard. Take your dog for brisk walks, jogs, runs and even hikes as these are all perfect exercises for this breed.

Rhodesian Ridgebacks love to be active because they are great hunters. They may participate in destructive behaviors around the house if they do not get ample exercise.  The exercise will also facilitate growth and bone density in your dog.

What If My Rhodesian Ridgeback Is Not The Right Weight?

Some Rhodesian Ridgebacks will have a somewhat larger bone structure, so a pound or so over the ranges stated limit is not uncommon and is no cause for alarm.

Males are generally slightly larger than females. If Rhodesian Ridgeback pups have a consistently low weight, you don’t need to be alarmed but ensure that he is receiving proper nutrition and always visit your vet.

What Is The Life Expectancy Of Rhodesian Ridgebacks?

As a dog parent, you should be careful about wellness and health for your dog’s continued survival. Diet and exercise is a great way to achieve good health. You also need to make sure that your dog visits the vet regularly.

How Much Does It Cost To Own A Rhodesian Ridgeback?

Your total budget will be impacted by the type of food you will come to buy for your dog.

The Rhodesian Ridgeback is a large dog so you will need to spend more on food. This is especially so if he is very active.

Through the dog’s lifetime, the average cost of owning a Rhodesian Ridgeback is $22,225. This can cover all his needs such as medical expenses, licenses, food supplies, training costs, and grooming expenses.

Rhodesian Ridgebacks are typically healthy overall. However, they are as prone to certain health conditions as all other dog breeds are.

Not every Ridgeback will suffer from all of these diseases, but it’s crucial that you are aware of them if you’re thinking about adding this breed to your family.

You should expect to see health clearances from the Orthopedic Foundation for Animals, in Rhodesian Ridgebacks, for thyroid, elbows, and hips, and from the Canine Eye Registry Foundation (CERF) certifying that the eyes are normal.

Rhodesian Ridgebacks are usually healthy dogs, and good breeders would examine their dogs for eye anomalies, thyroid function, and hip and elbow dysplasia.

Rhodesian Ridgebacks are prone to bacterial and viral infections. These infections affect all dogs and include parvo, rabies, and distemper.

Many of them are preventable with a simple vaccination It is recommended that you speak to your vet about these vaccinations because of the diseases that tend to affect them, and other factors.

You should also monitor all interactions between dogs and small children to avoid any abuse from either party.

Rhodesian Ridgebacks don’t shed much at all. You can basically keep them clean with a weekly brushing and a wipe down with a damp cloth. Additionally, they need regular tooth brushing and nail trims.

Training can be hard to do if you don’t start at an early age. You will be able to train your Ridgeback to a high level even though they can be stubborn and strong-willed. You need to be consistent, firm, and fair.