If you are just coming across the breed of an Olde English Bulldogge and wondering why the name has been so dramatically spelled wrong, you have a lot to learn.

It might come as a surprise, but Olde English Bulldogges are actually an extinct breed of dog that have come back to life.

Even though the Olde English Bulldogge is the reinvention of an extinct breed (Old English Bulldog), the dogs are considered adults when they are about a year old.

The exact time that they stop growing will vary from dog to dog, especially since the breed is made up of a combination of several breeds, but as a rule, a year of age is when they are done growing.

The dogs can continue to gain height and weight until 18 months as well, but as a rule, you can expect the breed to be about done growing around a year.

You can use an Olde English Bulldogge growth chart in order to work out how large your puppy will be as he grows.

It is important to know that since there are many different breeds considered when looking at an Olde English Bulldogge, the weight charts might not be 100% perfect.

But, it still should be able to help guide you to working out how large your puppy will be when he is fully grown.

As you look at the weight chart, just follow where your puppy’s age will run into the puppy’s weight to get an idea where he is on the growth curve, you can then follow the curve to see how large your puppy is going to be in the future.

This is not foolproof, however. Your puppy might not fit with the chart at all. That is fine as long as he stays on his growth curve. 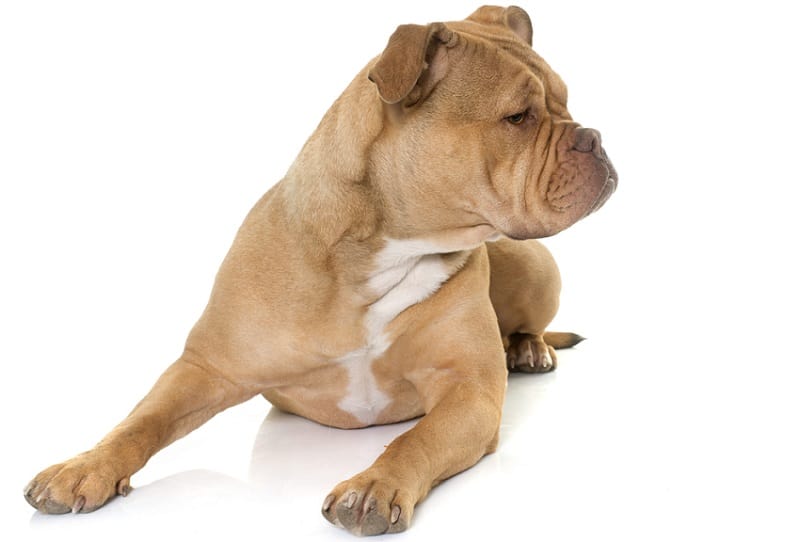 When your Olde English Bulldoggeis born, you will not be able to expect much out of the puppy. The puppy will be with his mother at this point, relying on her milk.

They are born with their eyes closed and it will take several days to be able to see. The Olde English Bulldogges are usually between 4 and 5 ounces at birth, but they will grow quickly.

Between 3 weeks and 12 weeks, you can expect to see a lot of change your Olde English Bulldogge puppy. They become far more responsive to sounds and will begin to really explore their world.

They can grow from 5 to 15 pounds in this time period as well, so you know that the puppies will grow very quickly. This is when your puppy is going to start getting into all kinds of trouble.

When your Olde English Bulldogge puppy is between the age of 4 and 6 months old, he will be growing steadily. He should be somewhere between 20 and 25 pounds when he is 5 months old.

Just make sure that your puppy is continuing to follow his own growth curve as he ages. He should have quite the personality at this point and be getting up to all of kids of mischief.

By the time your Olde English Bulldogge puppy is 9 months old, you can expect him to weigh around 45 pounds.

He will be closer to his final weight, but should not be fully grown at this point, though he should have really developed his personality.

You can also reduce his meals to just twice a day, instead of the three times a day that is common for puppies 6 months old and younger.

Between 10 months and 12 months old, your puppy will be in his final growth leap. He should be completely grown around his first birthday, though some dogs will continue to grow for a little while after.

At this age, you can expect your puppy to be anywhere from 50 all the way up to 80 pounds, depending on whether he is male or female and the genetic size of your dog.

Most often, the dogs will have reached their final height by 12 months, but they will still continue to gain weight until they are 18 months.

This is the time to watch out for unnecessary weight gain and to switch your dog from puppy food to regular dog food. It is very difficult to get a dog to lose weight once they have gained too much.

How Big Will My Olde English Bulldogge Puppy Get 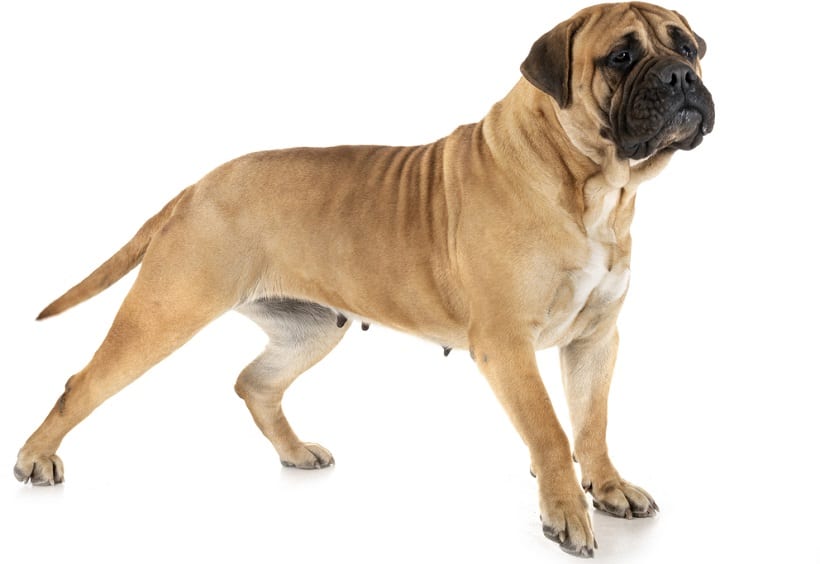 Genetics and gender are two of the biggest factors that determine your Olde English Bulldogge’s size. They will be genetically more inclined to being larger or smaller, depending on the size of their parents.

In general, nutrition is not likely to affect the growth of your Olde English Bulldogge as far as size goes. Even undernourished dogs will still maintain the height that they would have had.

The issue is that they might not be getting enough nutrients, which could make their bones weaker or could be the source of future health issues. It might not impact their size, but it will for sure impact their health.

Physical activity and overall health can also affect the dog’s growth, but it might not be the way that you expect. Good physical activity can help keep your dog the appropriate weight for his size, which can prevent future health issues.

Overweight dogs will still be the same height regardless, but they will not be as healthy or mobile.

If your dog already has health issues, it could cause stunted growth, but is more likely to just shorten the dog’s lifespan.

What If My Olde English Bulldogge Is Not The Right Weight

If you are looking at the Olde English Bulldogge growth chart and thinking that your dog is not the right weight, there are a few considerations to think about.

The first, and most important, is where is your dog on his growth curve? The growth curve is the natural curve that dogs will gain weight using.

Every dog will have his own growth curve, so as long has he is gaining weight at the appropriate pace and has consistently done so, there is nothing to worry about.

If you are noticing that your dog is looking more overweight or you can see his ribs, then you might need to consider other options. For a dog that appears underweight, the first step is to increase his food slightly.

If his appetite is healthy, he should eat it. If your dog is overweight or is off his growth curve, it is best to confer with the vet to see what you should do.

What Is The Life Expectancy Of Olde English Bulldogges?

The average life expectancy of an Olde English Bulldogge is between 10 and 14 years. This is a pretty typical age for large breed dogs, because they do not have as long of life expectancies as smaller dogs do.

That said, it is important to note that how you treat your Olde English Bulldogge can affect his lifespan.

Dogs who are fed well, exercised well, and who are well-loved have a longer lifespan than dogs who are not well taken care of.

Their lives can also be cut short if they are not well watched and make mistakes that cause an early death.

While the Olde English Bulldogge is a classic breed that has been recreated, it is really a specific kind of mix of breeds that are working together to result in a set combination.

As a result, Olde English Bulldogges have fewer health issues that other purebred dogs do. This is a common situation with mixed breeds as well. Still, there are a few common health issues, including:

While the Olde English Bulldogge breed was once considered extinct, the breed is back and makes for a charming pet.

Just remember that when you are looking at the dogs expected weight that you need to think about how quickly he is growing and whether he is staying on his own growth curve.

Feed your dog with good quality food at least twice a day and make sure that you can see the dog’s waist, but you should not be able to count his ribs with your eyes. If you do become concerned about your dog’s growth, always ask your vet for guidance.