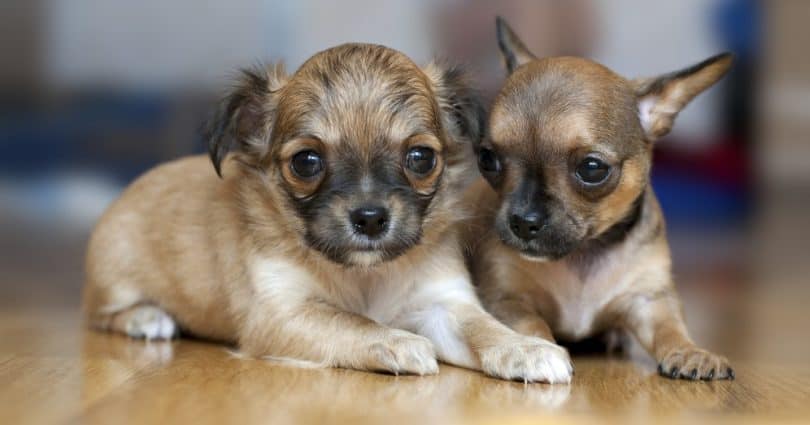 When you adopt a Chihuahua puppy, you will naturally want only the best for your new little family member. But taking care of your puppy goes beyond love and affection. You also need to feed your puppy right.

Knowing how much to feed a Chihuahua puppy is essential in helping him grow into the healthy puppy that you want him to be.

You will need to feed him the right amount, at the right intervals, and know that you are feeding him the right foods. Each dog breed has individual needs and the Chihuahua breed is no exception.

How Much Should A Chihuahua Puppy Eat?

A Chihuahua is one of the smallest breeds in the world and they do not eat much in the way of food. An adult Chihuahua will only consume about ½ to 1/3 cup of food a day, split up into 3 meals. A puppy Chihuahua needs even less than that.

Typically, they will eat about ¼ of a cup of food as younger puppies, gradually increasing up to ½ cup as they grow larger and require more calories. The smaller sized Chihuahuas eat less than the larger counterparts, so the amount your puppy needs will be based on the individual dog.

How Much: Chihuahua puppies should only eat about ¼ to ½ cup of food a day, depending on the age and size of the dog (see our Chihuahua growth chart for more detailed information).

How Often: Ideally, puppies should be fed 3 to 4 times a day to give them food when they need it. Check out how much to feed a Chihuahua puppy guide below.

What Food: Chihuahuas must be fed dry kibble that is low in fat. They do not get very big, so do not expect them to eat much. They do have trouble losing excess weight, so keep them on healthy food to begin with.

Careful: Small breeds need dry kibble because they have a tendency toward dental issues. Dry food will clean their teeth as they eat it.

How Much To Feed A Chihuahua Puppy? 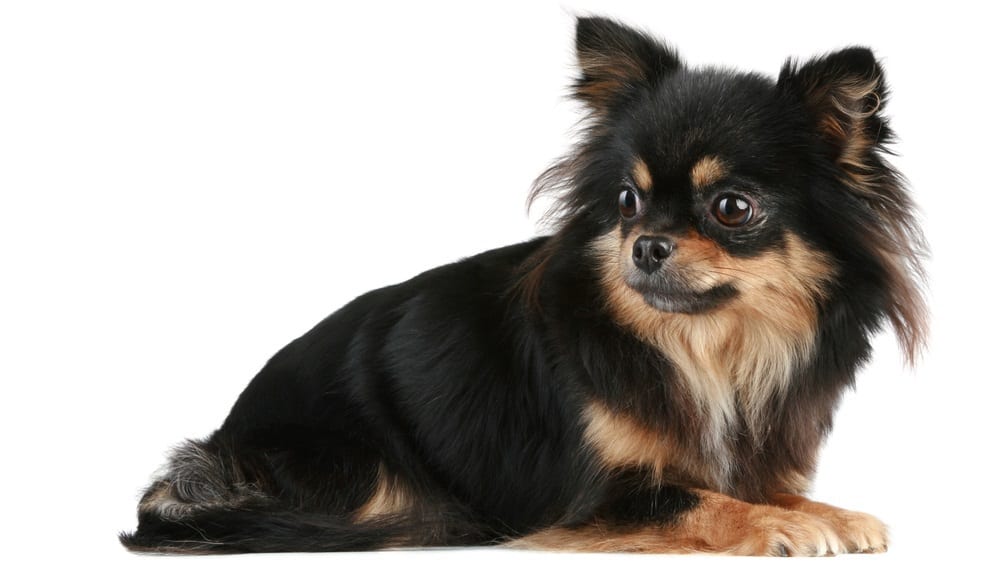 A 2 week old Chihuahua puppy will have recently opened his eyes to take in the world around him. He will need to stay close to his mother, given that his little legs will not carry him far from his litter.

He will be completely reliant upon his mother’s milk. Chihuahuas are tiny at this age and it will be hard to tell if one looks underweight, so just make sure they are eating.

A Chihuahua puppy who has reached 3 weeks old will be experimenting more with how his legs work. He should be tottering around, but will be uncoordinated and will not stray from his mother.

Puppies at this age should still be completely reliant upon their mother’s milk and will not need any other sustenance. They will be growing quickly as well, so you should see them doubling in size before your eyes.

When a Chihuahua puppy reaches 4 weeks old, you can consider introducing him to solid foods. These are such small dogs that even a sampling of food will need to be minimal. Create a mixture that is one part kibble to 3 parts water.

Try seeing if the puppy is willing to taste it, but don’t be surprised if he is not interested. The mother dog should still be nursing her puppies on demand and he does not need other food yet.

A 5 week old Chihuahua puppy might be ready to try weaning again. Using the same concoction that you tried the week previously, offer it to your puppy to see if the puppy is willing to taste it. He might be interested, though he might also not be.

The mother dog should still be nursing the puppies, though she might be more up and about, giving the puppies some space to develop separately from her.

If you haven’t started the weaning process with your puppies yet, now is the time to get going. Continue with the food mixture that is one part food and 3 parts water. If your puppy eats the mixture willingly, you can try again later, reducing the amount of water.

Continue to do this until there is no water and you are just feeding the puppy kibble. His mother should still be nursing him as well, though she will be spending less time doing it.

When your puppy reaches 7 weeks old, you should be offering him food several times a day. He is probably not ready for consistent meals and might still be getting some milk from his mother.

The mother will probably be doing more quick feeds, where she just comes by long enough to give the puppies a drink before moving on with her day. The puppies will not be eating much in the way of kibble, yet.

At the age of 8 weeks, the Chihuahua puppies should be ready to be rehomed and move away from their mother and littermates. They should have already been exposed to kibble, therefore the transition should not be too shocking as their mother is unlikely to have continued to nurse them by now.

In the new environment, give your puppy time to adapt and don’t be surprised if it takes him a few days to get the hang of mealtime.

A Chihuahua puppy of 9 weeks should have been rehomed already and adapting to his new life and home. If you are changing his food from the kibble that the breeder was feeding him, you will need to do the change gradually, over the course of several days.

This will diminish the amount of upset that his stomach might experience with a sudden change in food. You want it to go smoothly.

Your 10 week old Chihuahua puppy should have had a massive growth spurt or will be experiencing one soon. You should have your puppy on a consistent feeding schedule, sticking with 3 meals a day.

They should be equal amounts of food at a time. You will need to gauge whether your puppy needs more or less food than you are giving him as it is likely that his appetite is increasing as he gets bigger and burns off more calories.

When your Chihuahua puppy has reached 11 weeks old, he should be eating with excitement. Do not read his excitement for his food as an excuse to give him more food, however.

You have to be careful with a Chihuahua puppy’s weight, because a few ounces can be the difference between healthy weight and overweight. Instead, just watch the puppy’s waist. If it is clear and defined, he should be at a good weight.

At 12 weeks, your puppy might have doubled in size over the last month. They grow rapidly at this point. He should still need 3 to 4 meals a day, but likely will still need less than a ½ cup of food per day.

These dogs really do not require much in the way of food, so do not worry if it feels like you are not giving you enough. If he seems ribby, you can increase his food slightly.

Our choice for the best food for Chihuahua puppies is the Royal Canin Chihuahua Puppy formula. This food is great, because it was specifically made with a Chihuahua’s needs in mind. Even the kibble is made for the muzzle of a Chihuahua, making it easy for them to pick up and to eat.

The formula is highly digestible as well and it helps reduce fecal smell as well as gastric issues.

Our second place choice for the best food for Chihuahua puppies is the American Journey puppy formula. This is a grain-free food made with great ingredients.

The food is nutrient-rich, containing Omegas 3 and 6 that come from salmon oil and flaxseed, as well as a complex of antioxidants for better growth and immune system support.

If you are looking for a budget friendly puppy food option, we suggest the Purina ONE SmartBlend puppy food.

This food is formulated using rich and healthy ingredients. The first ingredient listed is chicken. Additionally, it contains good amounts of phosphorus and calcium, both of which are helpful for growing bones. It also has DHA, an ingredient found in mother’s milk, which encourages brain health.

A 2 month old Chihuahua puppy can weigh anywhere from just over half a pound up to 2 pounds. The size of your puppy will depend greatly on how big his parents were, how well fed he was up to this point, and whether you have a male or female dog.

Remember that while the difference in weight is mere ounces, for a little dog, it means a huge difference. If you’re worried he’s underweight, consult with your vet.

When your Chihuahua puppy is 3 months old, you can expect him to weigh between just under a pound and 3 pounds. Your puppy should be growing quickly and gaining a few ounces by the week.

It might be hard for you to determine whether your puppy is gaining well because they are so small, but your vet should be able to guide you. Your puppy should look thin around the waist.

At 4 months old, a Chihuahua puppy can weigh from a little more than one pound up to 4 pounds. As long as your puppy is staying on his own growth curve, you do not need to worry whether your puppy is under or overweight.

Some dogs are just bigger than others. Chihuahuas should look slim, so don’t add more food based on his appearance, but they will need more food at this growth period.

When your Chihuahua puppy is 5 months old, you can expect him to weigh anywhere from 1.5 pounds up to just under 5 pounds. You will notice that the space between the smallest and largest Chihuahuas has spread out further, with the average Chihuahua weighing around 2.75 pounds.

You might not be able to feel the weight changes with your puppy, but you should notice him physically getting steadily taller and longer.

A 6 month old Chihuahua puppy should weigh somewhere between 1.65 and 5.5 pounds. The difference in dog type will be the biggest factor in how large your puppy is. If he is on the smaller end of the spectrum, don’t worry.

Likewise, Chihuahuas on the larger side of the spectrum do not warrant concern, unless they have strayed off of their growth curve. Your puppy still has some growing to do, reaching a final adult weight between 2 and 7 pounds.

Check Out Our Other Articles: 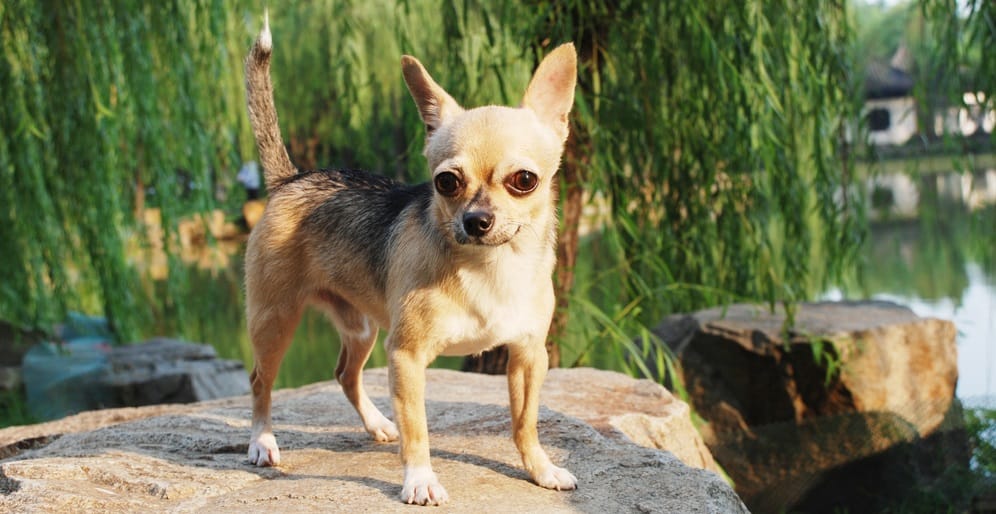 Regardless, we know that the small breed is a South and Central American small dog that has been around for hundreds of years and were revered by the Aztec Empire as well as the Toltecs. The ancestors of the modern-day Chihuahua were wiped out by the Spanish invaders in the 16th century, but were later rediscovered in the Mexican state of Chihuahua in the 19th century.

Your Chihuahua puppy needs to be on a consistent feeding schedule. This is important to maintain his weight and help him grow into a healthy and fit Chihuahua. While many people think of them as “purse dogs,” they still need to have an active and fit lifestyle, which includes being well on a schedule.

For a puppy, this means feeding them 3 to 4 times a day, with the same amount of food at each meal. Given their size, if a Chihuahua becomes overweight, it becomes difficult for him to lose the excess weight.