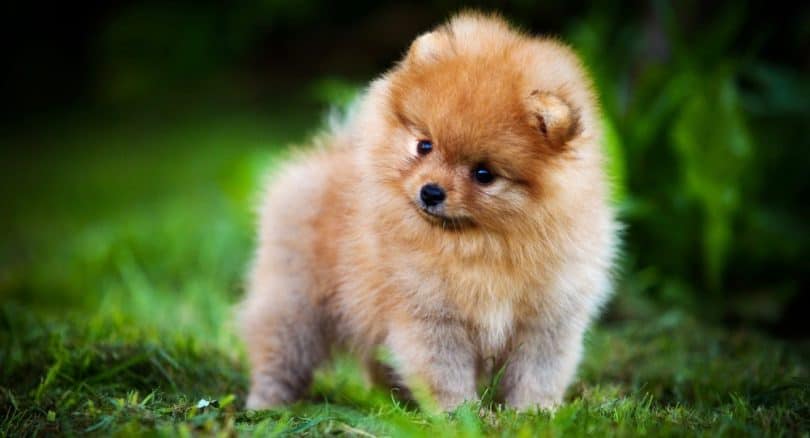 Pomeranian’s are known for being one of the cutest dog breeds around. Originating from the Pomerania region in Central Europe, the Pomeranian is a Spitz dog breed type and famed for its small size—leading many to refer to the breed as a toy dog breed.

Fortunately, this article aims to address any questions or concerns Pomeranian dog owners may have regarding the growth trajectory of the breed. From Pomeranian birth to adulthood, this article gives you all the essential information you need to know.

When Do Pomeranians Stop Growing

The majority of the growth for young Pomeranian’s occurs during the 2 to 12 month period. For some Poms, growth may continue into the 14 or 15-month period, however, this growth tends to be confined only to the chest size as opposed to overall growth.

There are a vast array of factors that can affect the growth of a Pomeranian. Factors can include environment (home), diet, exercise and genetics. Aside from genetics, 3 of these 4 factors can be controlled by the dog owner who should take note of how crucial the first 12 months of support can be to ensure the Pom grows to its full potential. 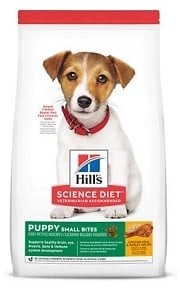 To help you fully understand the expected growth trajectory of the Pomeranian, the Pomeranian growth chart will be explained to give you specific information what to growth and weight should be expected from your Pom at each crucial stage of their life.

The chart will explain how you can estimate your Pomeranian’s weight and size. As a dog owner, keeping a close on your Pom’s weight and growth is a responsibility you should take seriously. One of the earliest signs of illness or disease can be identified by stunted growth or extensive and sudden weight gain/loss.

The Pomeranian weight chart breaks down the exact weights to expect across 5 different stages of a Pom’s development. Adulthood is classed from 18 months and older, this is to account for late-stage growth that can occur from the 12 to 18 month period.

Considering the life expectancy of a Pomeranian is the region of 12 to 16 years, of which approximately 1 year is assigned to growing, it is important to use the Pomeranian weight chart closely in the Pom’s first year to ensure a long and healthy life.

Pomeranian Growth Chart – What To Expect

Pomeranian birth weights can vary from 2.5 oz to 5.5 oz. The first step is to know the starting weight and track from there.

Therefore, if your Pom was born 2.5 oz, expected weight after 2 weeks would be 6 oz.

The 3-week to 12-week period is a crucial stage in the Pom’s development. It is during this period that genetically larger Pom’s will gain a significant amount of weight, far exceeding genetically smaller Pom’s.

During the 4-month to 9-month period, the Pom would be expected to have grown around 80% to 85% of its total body weight. It is this stage wear the puppy starts to resemble a fully grown Pomeranian.

The weight gain expected between the 10 month to 18 month period is should be fairly minimal—around 10% to 15% of their overall weight. As previously mentioned, most Pom’s stop growing at 12 months, but all will certainly have gained their full weight by 18 months.

As your Pom should resemble an adult by 10 months, identifying weight gain can be slightly more difficult. Keep weighing your Pom regularly to ensure healthy growth is being maintained.

After 18 months, the Pomeranian has reached its adult weight. This weight can vary between 2 lb to 6 lb, depending on the size at birth and genetics.

After taking the 18-month weight, owners should regularly monitor the weight of their adult Pom’s as routine health checks. Sudden weight gain or weight loss can be a sign of poor health, poor diet or lack of exercise. The goal should be to maintain their 18-month weight throughout adulthood, allowing for small fluctuations. 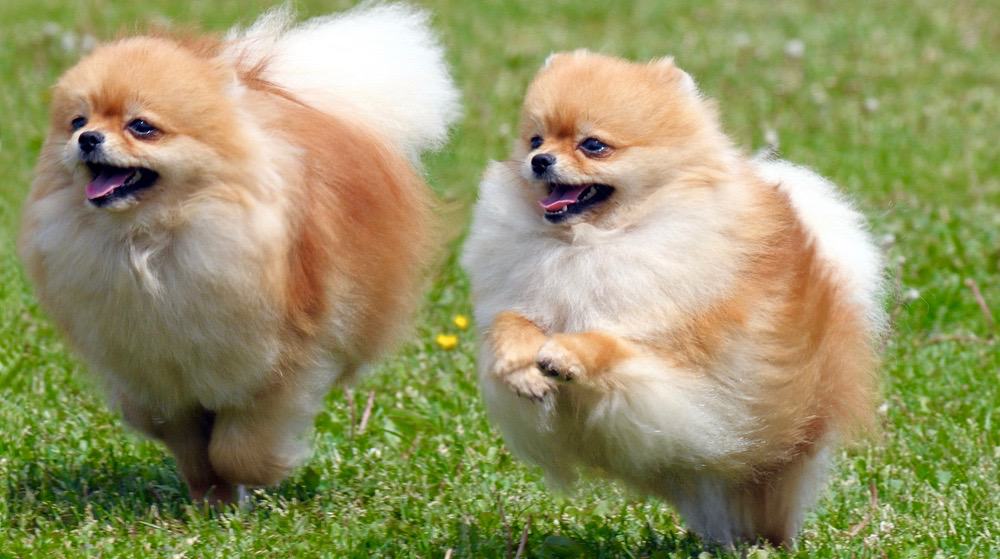 The body shape of Pomeranian changes as most would expect when growing from a puppy to an adult.

One of the most noticeable changes is that the Pom becomes much leaner when transitioning to adulthood. This is aided by added height and width, particularly across the chest, which sees the chubby puppy become a tougher, more stable adult Pom. But to know you have a healthy adult Pom is best indicated by the furry balls of fluff running around your home.

As Pom’s enter their senior years from the age of 8, it is not uncommon to see them reduce in body size. That is not to say that they become a puppy again, but they will slightly shrink compared to their peak adult years. 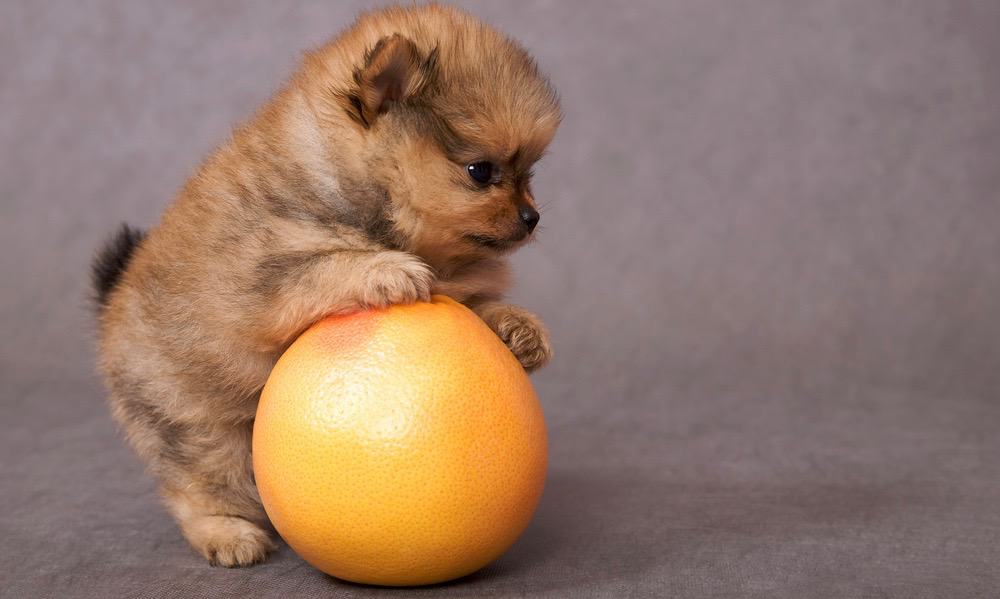 The factor most affecting the growth of a Pomeranian puppy is the genetics inherited from ancestors. Often owners may not be fully aware of the lineage of their Pom pup, but if possible, you should get hold of this information.

Seeing the size and weight of the parents and grandparents will be a good indicator as to the expected size of your Pom. This would reduce chances of concern should your Pom’s weight be on the extremes on either end of the scale.

Healthy, balanced nutrition is key to any prosperous, long and enriching life – it is no different for Pomeranian’s.

To support strong puppy growth, provide foods that are high in natural ingredients and are high-quality foods. Cheap, unhealthy or incompatible foods can likely stunt the growth of your Pom.

The same rules apply to adulthood. Pom’s need energy from naturally sourced proteins and vitamins to live their characteristically energetic lives. Feed your Pomeranian well and the reward will be a long, healthy, and active life for your Pom.

Pomeranian’s are active, energetic dogs requiring regular exercise to keep stimulated. Regular intense exercise also strengthens to the immune system to fight off any illnesses or diseases so is additionally important for the long term health of your Pom.

Exercise can also strengthen the muscles and respiratory system of your Pom.

Whether it be walks twice a day or ball games, get your Pom outdoors and active to give them a long and healthy existence.

How Long Are Pomeranian Pregnant?

The gestation period for a Pomeranian is 63 days from the time of conception. This is no different from the majority of dog breeds.

The Pomeranian’s usually start breeding from the age of 2 up until age 5 to 7. Across a female Pom’s life, breeder’s would expect around 4 litters.

Although Pom’s are ready to conceive from 8 months, waiting until to 2 years-old before starting the breeding is recommended as females are sufficiently mature to be mother’s and go through the breeding process.

Pom’s should be of the correct weight, age and health before breeding to ensure a healthy litter is created.

How Many Puppies Do Pomeranians Have?

A typical Pomeranian litter will have between 1 and 4 puppies. Considering that Pom’s could have a maximum of 4 litters over their lifetime, one female Pom could give birth to 16 Pom puppies—that’s a great effort!

After giving birth, your Pom could have small bleeding a discharge for around 10 days. However, if the Pom is a high temperature, smells bad, has excessive bleeding or has no appetite, you must call the vet to ensure the Pom can be given proper care after the stress of giving birth.

What If My Pomeranian Is Not The Right Weight

Your Pomeranian could be the wrong weight due to either environmental, genetic, nutrition or dietary reasons.

As previously discussed, finding out the genetic history of your Pom should be your first focus. If your Pom’s parents or grandparents were particularly lightweight or overweight, this could be a sign that your Pom is simply following the genetic make-up of their ancestors.

However, if genetics are fine, the other 3 controllable factors affecting your Pom’s weight could be the issue. 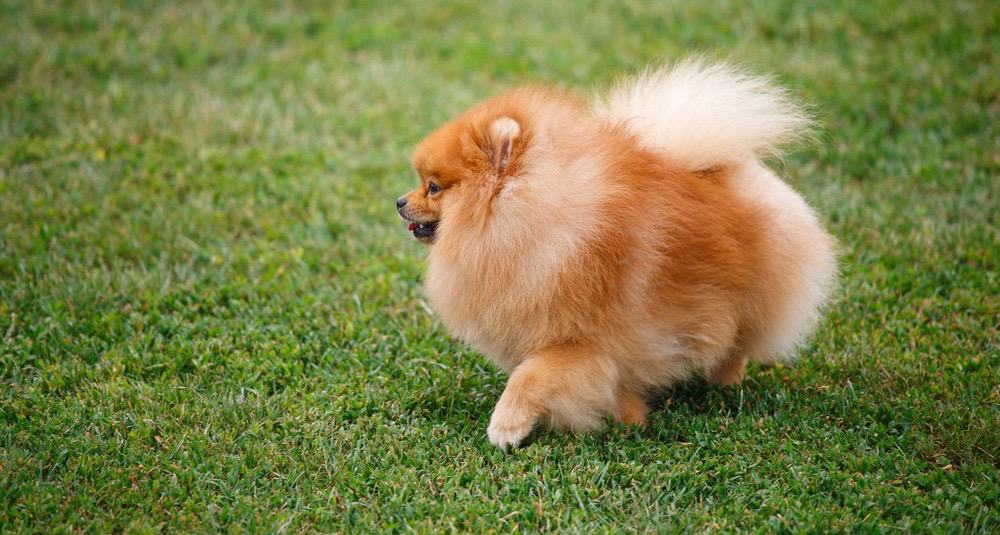 You should first consult your vet before making any dramatic dietary or exercise changes, but these changes can often be the cause of weight issues and can be easily fixed.

Whether it be transitioning to be a more rigorous exercise regime or providing higher quality, natural foods, you will likely see a quick change in the weight of your dog provided they have no other underlying health conditions.

What Is The Life Expectancy Of A Pomeranian?

Pomeranian’s are expected to live between 12 to 16 years. The core adult years are between 18 months to 8 years, with senior Pom’s showing signs of age from 9 onwards.

As Pom’s are a smaller sized breed, they are on the higher end of the life expectancy scale compared to medium-sized and larger sized dogs. This is great for owners who want a long-lasting family friend to keep them company.

Although the dynamism and energy slowly reduce as Pom’s age, investing in a Pom is an investment in an energetic ball of fluff!

How Much Does It Cost To Own A Pomeranian? 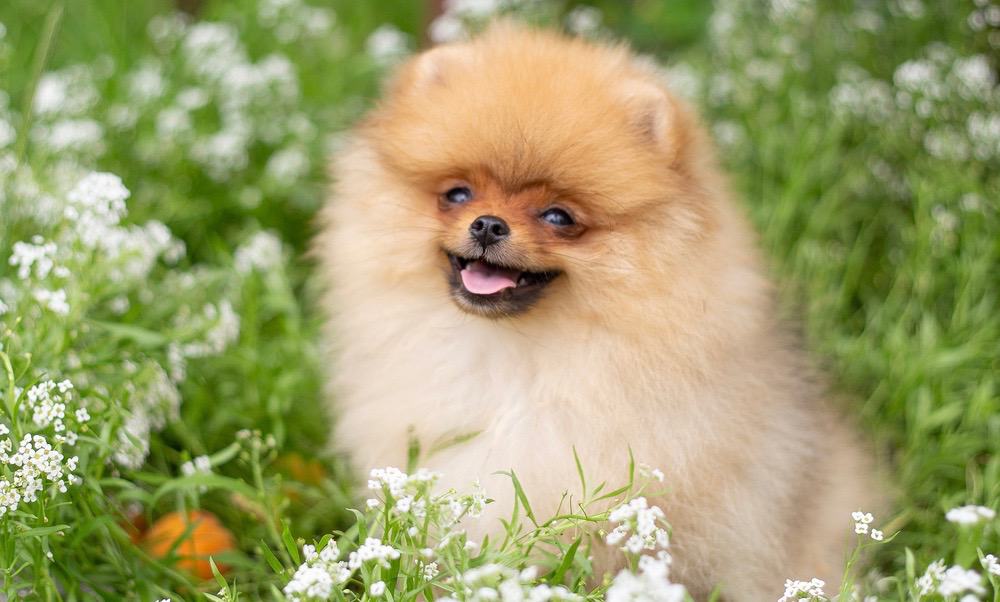 The first couple of years of a Pom’s life are more high maintenance, therefore requiring a higher annual sum of around $1200 to cover all necessary maintenance costs. For those wanting external dog training, your costs will be higher than that.

Once your Pom enters adulthood, the total cost of feeding and maintaining a Pom is around $800 per year.

The Pomeranian is a long-living dog breed with very few health problems specifically associated with the breed. However, there are few conditions to look out for.

Firstly, obesity. As the Pomeranian is a small dog breed, they do not require much food to have the sufficient energy required to last the day. As owners, you have to be very wary of portion sizes when feeding a Pom as they can very easily gain weight.

Another common issue with Pom’s relate to dental health. As Pom’s have small mouths compared to the number of teeth, they can frequently suffer from gum and teeth issues as well as plaque build-up. If plaque build-up is not sorted soon, it can lead to more serious mouth disease. To ensure your Pom has good dental health, brush their teeth regularly.