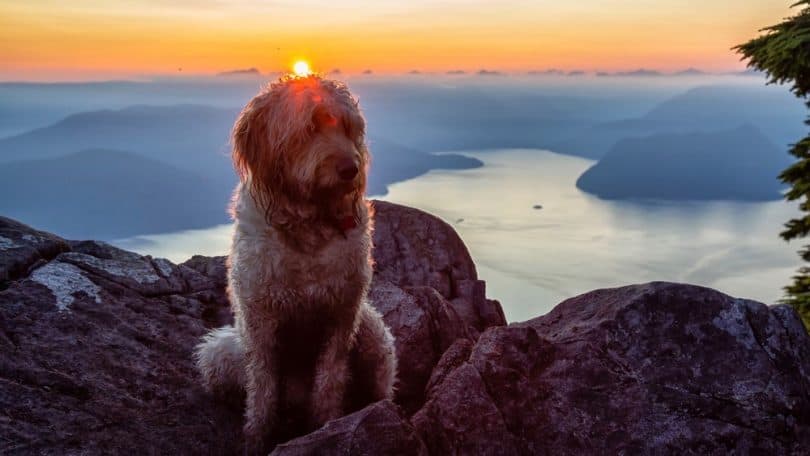 Goldendoodles have arisen as the ideal dog for people with allergies over the last few years.

But, when you start looking at the different variations of the breed as you look to adopt one, it quickly becomes overwhelming. After all, how can you know whether you are looking at an F1 or an F1B Goldendoodle?

We have broken down everything that you need to know about an F1B Goldendoodle, including their appearance, genetics, and what kind of grooming that you can expect to take on.

This is what you need to know before you begin your search for the ideal Goldendoodle.

What Is A F1B Goldendoodle 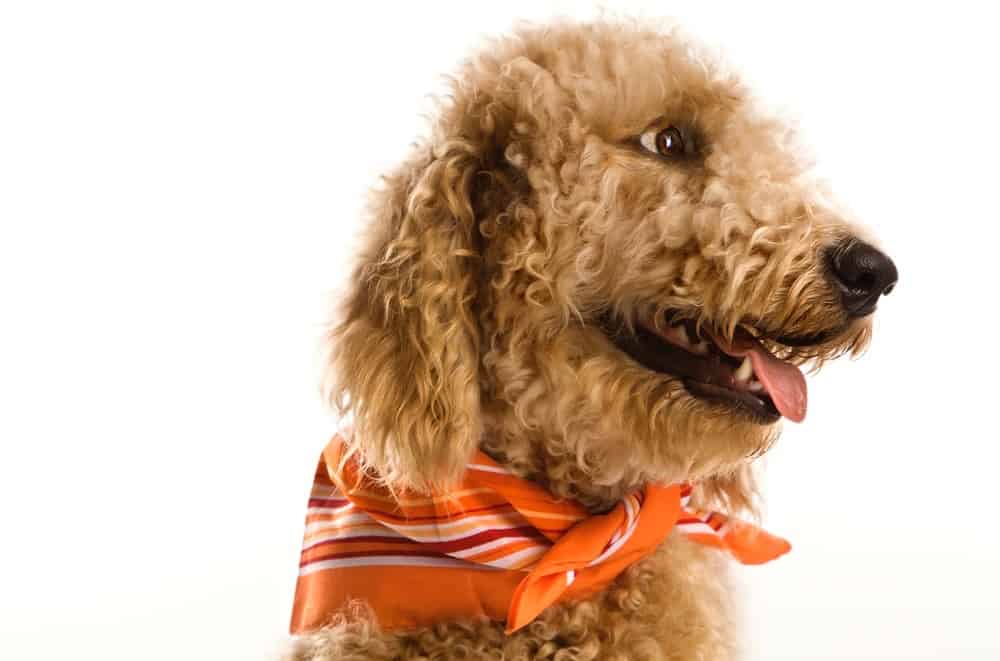 Before we jump straight into an explanation of an F1B Goldendoodle, let’s look at the breed itself. A Goldendoodle is made up of a mixture of a Golden Retriever and a Standard Poodle.

The term F1 is not limited to Goldendoodles, but refers to any first generation of a mixed breed. This means that an F1 Goldendoodle has a purebred Golden Retriever parent and a purebred Poodle parent. So what is an F1B Goldendoodle?

An F1B Goldendoodle is when a purebred Poodle has been bred with an F1 Goldendoodle. The B means “backcross,” since it is then mixing with an original bred.

It is important to remember that the F1B Goldendoodle will have a combination of traits of both the Golden Retriever and the Standard Poodle.

The AKC lists Standard Poodles as extremely intelligent, friendly, ready-to-please, eager, and athletic. Meanwhile, a Golden Retriever is friendly, intelligent, devoted, and eager-to-please. That means that the resulting dog will be loving, smart, and an essential member to any household.

Advantages and Disadvantages of F1B Goldendoodles

There are many advantages with an F1B Goldendoodle and few disadvantages. The biggest issue with the breed is that while we say that it is a dog that should be 75% Standard Poodle and 25% Golden Retriever, the actual makeup is not that clean cut. 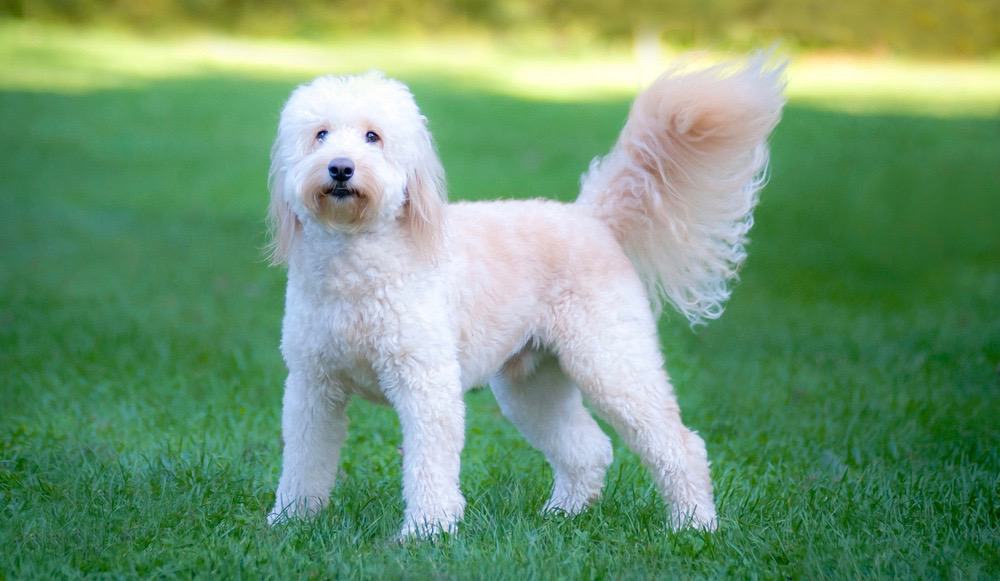 That said, you are going to get a wonderful combination of traits, such as intelligence, devotion, friendliness, and eager-to-please. That makes these dogs excellent family dogs and suitable for families with children.

What Is A F1 Goldendoodle

As we mentioned above, the F1 Goldendoodle is the first generation of a Goldendoodle. This means that the dog has a purebred Golden Retriever for one parents and a purebred Standard Poodle for the other parent. This is the initial cross and a true Goldendoodle.

The ‘F’ in F1 stands for “filial.” This is just an easy way to note the generation. Since an F1 is a first generation of the mix, you know that you are getting an even mix between the two dog breeds.

Their appearance is pretty uniform as a result. The mix usually has loose, wavy coats that are the color of a Golden Retriever.

They do shed some, though not nearly as much as a Golden Retriever does. If you are looking for a Goldendoodle that does not shed, you might be looking for the F1B variety rather than the F1.

The F1 is a good choice if you are a big Golden Retriever fan, since they still have a heavy amount of Golden in them. If you do not care as much and are hoping to get a dog that doesn’t shed, you might be better with the F1B variety that has more Poodle.

Differences Between F1 vs F1B Goldendoodles

There are genetic differences between the F1 and the F1B Goldendoodles, even though they are made up of the same dog breeds.

The difference in genetics happens because there is a variation within the genes from generation to generation as the breeds are further mixed together.

While we know that the F1 is a mix of 50% Golden Retriever and 50% Standard Poodle, the actual amount of genetics that comes from each breed varies and will further be thrown into disarray when you mix a Goldendoodle back with a Poodle, giving you the F1B Goldendoodle.

When you have an F1 and an F1B Goldendoodle side-by-side, there are not a whole lot of physical differences between the two types, but there are some.

With an F1 Goldendoodle, their fur is not predictable. They can have straight, curly, or wavy fur, depending on which elements from each breed they pick up.

Their colour can also vary, depending on what was picked up in each breed. The F1 usually weighs between 50 and 70 pounds.

The F1B Goldendoodles are a little more predictable. They usually have a curly or wavy coat with a lot more curls than the F1. The curl is much like what you see with a Standard Poodle.

Colour-wise their coats can be black, white, copper, grey, golden red, or even a peachy colour. Golden is the most popular, however, since it is what most people expect when they adopt a Goldendoodle 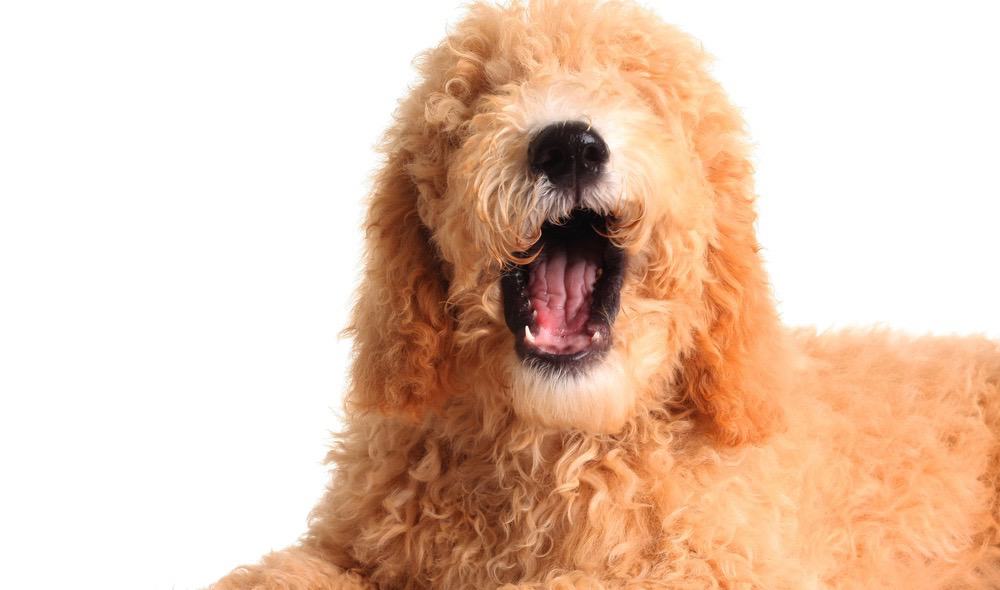 Before we jump to health issues, it is important to start with how healthy each type of breed is. It has been shown that F1 Goldendoodle has Hybrid Vigor.

This happens when two purebred dogs have been mixed together, giving you a healthier and more robust constitution than your dog’s parents would have.

Some other common health issues that are found in both the F1 and the F1B Goldendoodles include:

Hip Dysplasia: This condition weakens the dogs hip joints, resulting in weakness in limbs and difficulty getting up. It is found in both Poodles and Golden Retrievers.

Epilepsy: Seizures can be genetic and are normally controlled with medication.

Addison’s Disease: This disease is common in Poodles and it will affect a dog’s ability to produce the stress hormone cortisol.

Shedding & Grooming: Many people seek out Goldendoodles, because there is a common thought that the breed does not shed. This is not completely true.

With the F1 Goldendoodle, they might shed a lot, or they might not shed at all. It just depends on which genetic code that they have.

Unfortunately, they don’t get their adult coats until a year and a half, so you can’t tell at first.

Meanwhile, the F1B Goldendoodle usually does not shed, because they have so much more Poodle than a Golden Retriever.

You might see some minor shedding, but definitely nothing major. You can brush them, but they do not need the grooming in the same way as an F1 Goldendoodle does.

The price of the F1 and the F1B Goldendoodle is not a set thing. The price can vary a lot, because there is variation within the breed’s temperament and desirable traits.

Both the F1 and the F1B are not cheap, but remember you are getting what you were paid for. The F1 Goldendoodles normally run about $2,000, as long you are getting certified mix between a Poodle and a Golden Retriever.

F1Bs are more desirable, because they are hypoallergenic and much less likely to shed. You will not need to have this dog groomed as much as an F1, because they will not have as much Golden Retriever fur elements in their DNA.

How To Predict Your F1B Goldendoodle’s Weight

Predicting your F1B Goldendoodle’s weight is unfortunately very difficult to do. Because the F1Bs are a second filial generation, the concentration of each breed will shift and change.

So you might think that it is 75% Poodle and 25% Golden Retriever, but the real mix just depends on the dog’s genetics. 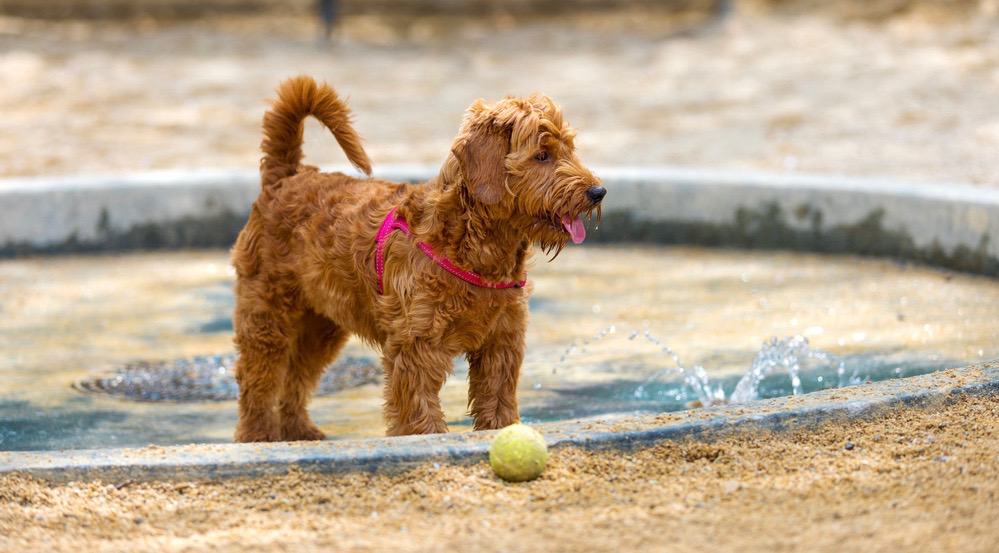 While you can use a weight chart to get an idea of the size of your Goldendoodle, the estimate is still likely to be off. Instead, you could get one of those dog DNA kits that will tell you exactly what the breakdown between the two breeds is.

Without knowing exactly what the genetic makeup of your dog is, you can estimate with a weight chart. For example, if your Goldendoodle is 53 pounds at 16 weeks of age, you can expect him to be about 96 pounds when he is a year old. These are just estimates, however.

Just to make things all the more complicated, there is another thing that you will need to think about if you are adopting a Goldendoodle. Is your puppy a mini, medium, or a standard F1B? Here is what you should know.

A mini Goldendoodle is produced by mixing a Golden Retriever with a Miniature Poodle. Most of these dogs weigh between 7 and 10 pounds.

This mixture is not ideal and is definitely not recommended to try to recreate on your own. Because of the dramatic size difference between a Mini Poodle and a Golden Retriever, they are not guaranteed to be small, but are unpredictable as to what they will act like.

This breed is trickier to create, because it is one of those situations where you don’t know exact percentages of each of the parent breeds.

Generally, the breed is produced when a Golden Retriever has been mixed with both a Standard Poodle and a Miniature Poodle, leaving it at a medium size.

This is the breed makeup that we mentioned earlier. The dogs are made up of one parent that is an F1 Goldendoodle and another parent who is a Standard Poodle. As a result, you will get a 70 to 90 pound dog that is less likely to shed its fur.

There is little doubt that Goldendoodles are wonderful dogs, no matter what combination of traits your dog winds up with. Both Poodles and Golden Retrievers are highly intelligent dogs that work to make their families happy.

There are still things to remember, however, such as the fact that the varieties within the mixture can be unexpected. If you are not sure that this is the right breed from you, there are plenty others to choose from.

You should know that you might not wind up with a completely hypoallergenic dog because of the makeup of the dogs genes.

Look at the different types of F1 Goldendoodles that are available and you will still have to have some flexibility in dog options, as they are a mixed breed and there is no way to be completely sure ahead of time. Enjoy your dog when you can.