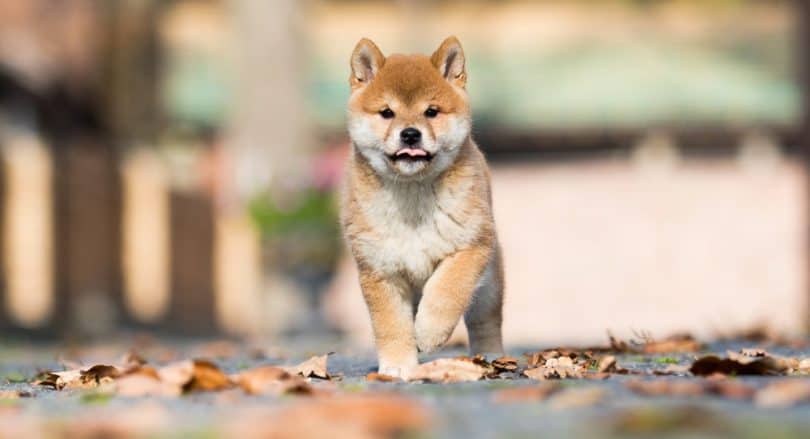 The Shiba Inu is a native Japanese breed. Shibas are a small breed, have a long-haired coat, a sturdy body and small upright ears. Their movements are a lot like that of cats, and they also groom themselves like cats do.

They are very agile and fast. Personality-wise, their owners describe them as alert, spirited, bold, and good-natured.

While the Shiba Inu is highly intelligent, these dogs are not easy to train. They have an independent spirit that can be frustrating for their owners.

Another trait of this breed is possessiveness. Your Shiba Inu doesn’t like his toys to be taken, and he will guard his food. They are very territorial. These dogs must be socialized from an early age to temper this trait.

If you want to monitor your Shiba Inu puppy’s growth, you can have a look at the Shiba Inu growth chart below.

When Do Shiba Inus Stop Growing

Shiba Inus dogs have done most of their growing by the time they are one year old. Shibas have a growth spurt between three to seven months when they seem to grow out of proportion.

The growth spurt can last up to eight months. After that, they don’t grow so fast anymore. Most Shiba Inus stop growing when they reach 12 months.

Between 12 and 18 months, they may continue to fill out. At 18 months, both males and females have reached their full adult size.

You can always see from the size of your puppy’s paws whether it still has some growing to do. If his paws appear oversized compared to the rest of his body, he will still grow bigger until his whole body is in proportion.

When you look at the Shiba Inu weight chart, you will notice that when the dogs reach eight months, their growth starts slowing down somewhat. They are now only putting on one pound from one month to the next.

The smaller-sized dogs put on even less. Both the males and the females only gain half a pound per month now. At nine months, the small male dogs weigh 16.5 pounds and at ten months they weigh 17 pounds. 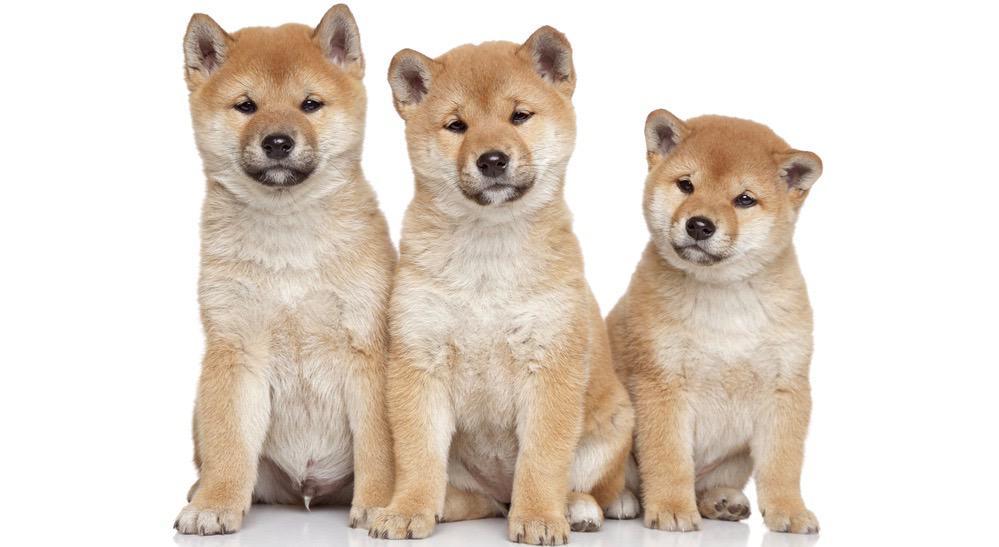 Birth to two weeks is called the neonatal stage. In this stage, the mother takes care of everything, primarily, cleaning and nursing.

The puppies are blind and deaf, but they have a sense of touch and taste. They can’t move around much, and shouldn’t be picked up. They can’t walk as such, they do manage to move their bodies about.

At the age of two to three months, puppies begin to develop fear. Keep introducing your puppy to new situations so he can learn that he doesn’t need to be afraid of everything.

There is an optimal time between two months and four months when a Shiba Inu can be socialized and trained.

This time is very important in a Shiba Inu puppy’s life and you must under no circumstances miss this window of opportunity if you want a well-behaved adult dog as a companion. If the vacuum cleaner scares him, show him that it won’t hurt him.

Throughout this time, keep on socializing your dog. Your puppy will attempt to test you and try to get away with not obeying the rules. The whole family must be vigilant and enforce the rules consistently.

Around six months, Shiba Inu reaches sexual maturity. A male puppy will start lifting its legs, so it’s important to teach your pup where this will be allowed.

Between four and six months, your puppy will start getting his adult teeth. It helps with this uncomfortable time if you provide your puppy with some chew toys.

Between five and six months, your Shiba Inu will become an adolescent. He will become just as rebellious as any human teenager, so watch out.

You must remain in charge and enforce all rules. If you didn’t manage to socialize your dog earlier on, this period will be very challenging for both you and your dog. In fact, it’s during this period that most Shiba Inus are abandoned by their human families because they become too difficult to handle.

When your Shiba Inu reaches one year, it’s time to take him to the vet for his annual check-up and booster shot.

Even at this stage, you might have to train your dog. There may still be orders that your dog has not mastered, so keep up the training. 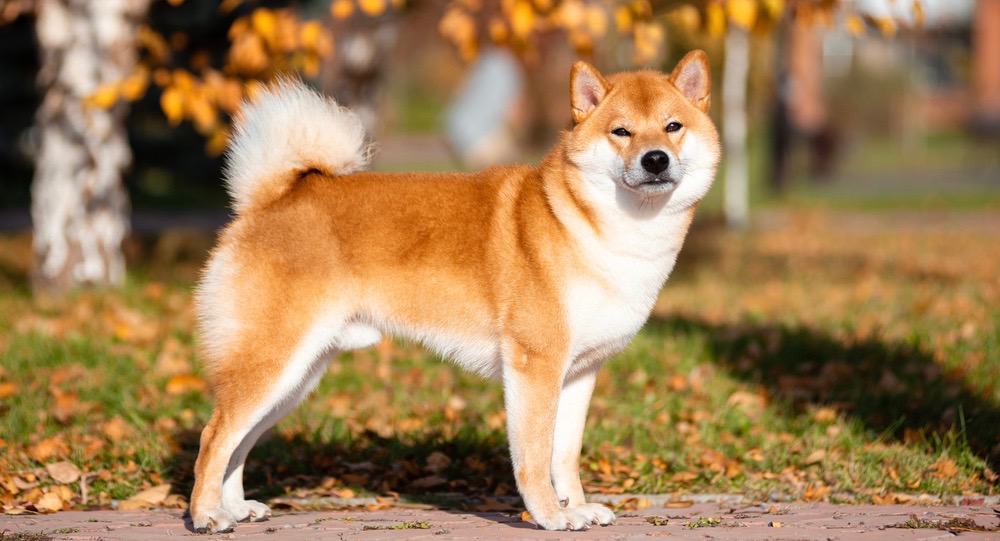 Unless properly socialized, your Shiba Inu may be suspicious of people and other animals. He will remain independent and show little desire to please you. If he’s not pleased with something, he might startle you with a loud scream.

Don’t be fooled by his small body – there’s a lot of dog in there. His high prey drive will always be there, so he’ll run after anything that moves, and don’t think you can catch him.

If you have to leave him outside unsupervised, make sure that you have a very secure fence or a high wall, for Shiba Inus are consummate escape artists.

When you go walking with your Shiba Inu, keep him on a leash. If you let go, he will go and you won’t see him again.

Genetics is the determining factor in the development of the body, shape, and size of all breeds. DNA plays a role in the size of all dogs. The Shiba Inu is a small breed, and many dogs only reach 20 pounds in weight.

You can expect your puppy to be the same size as his parents and grandparents.

Proper nutrition is necessary for the health and development of puppies. It directly influences their immune system. How nutrient-dense the food is and the amount of food a dog gets, can mean the difference between a healthy full-grown adult dog and a dog that doesn’t flourish.

Make sure you feed your Shiba Inu puppy the best quality dog food you can afford. These dogs have a tendency to put on weight, so be especially careful not to give your dog treats between meals.

Studies have confirmed that Shiba Inus can easily become overweight. It’s important to feed your dog only at mealtimes and to monitor its weight constantly. Obesity in dogs can lead to serious health issues for dogs later in their lives, and a hefty veterinarian bill for you.

To keep your dog’s weight in check don’t give him snacks and see that he gets enough exercise on a daily basis.

Fortunately, Shiba Inus are energetic and like to be active. Your dog will love being outside with you running and playing games. They will also walk and run with their owners, just remember to keep him on a leach.

How Long Are Shiba Inus Pregnant?

The Shiba Inu has the same gestation period as other dogs, which is around 63 days.

Shiba Inu puppies can also be born after only 50 days of gestation. If a dog goes into labor at this stage, normal birth can happen, but there is also the choice of a C-section.

Puppies have also been born as late as 72 days after conception. It is not advisable for the pregnancy to be allowed to carry on beyond 72 days. At this stage, a C-section should be performed to save the mother’s life and those of her puppies. 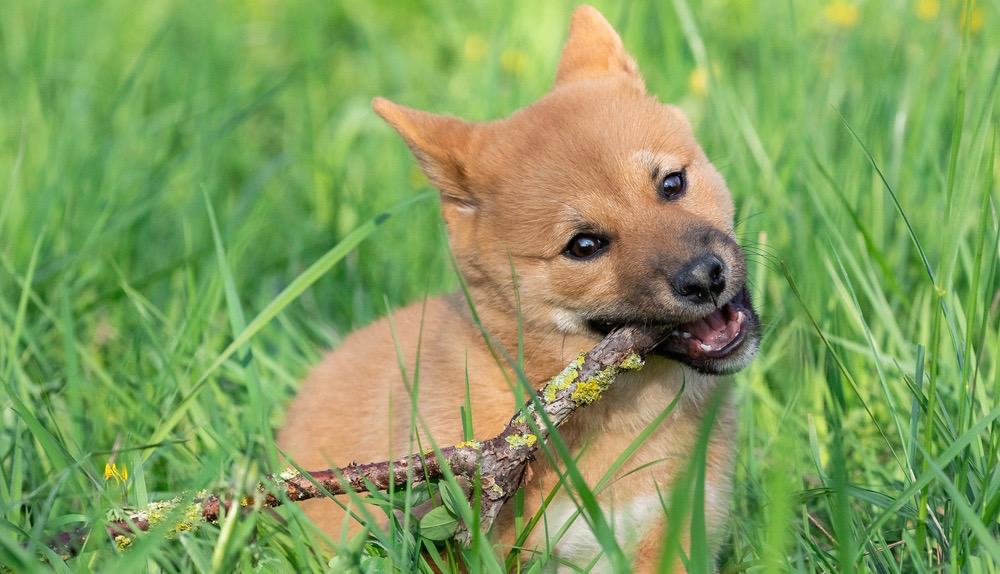 How Many Puppies Do Shiba Inus Have?

Shiba Inus don’t have large litters. Typically, a female Shiba Inu will produce a litter of two to three puppies. This small litter size is a result of the small built of this breed.

The births are characterized as being fairly easy with a high success rate. The Shiba Inu doesn’t typically have birthing problems. Most puppies are born healthy.

What If My Shiba Inu Is Not the Right Weight

As mentioned earlier, this is a breed that tends to put on too much weight. In fact, it’s more likely that your Shiba Inu will be overweight than underweight and malnourished.

You want to avoid obesity as it can take years off your dog’s life. These dogs have a very thick coat, so it’s not easy to spot when they are overweight.

If you’re unsure whether he’s overweight, look at your dog from the top – he should have a clear waste. Also, feel his ribcage. If you can’t detect any ribs at all, he is most probably overweight.

Keep your dog in good condition by feeding him the recommended daily amount of high-quality dry food twice a day. Avoid treats and don’t leave food in his bowl.

If you are concerned about the weight and general health of your Shiba, consult your veterinarian and cross-reference his weight with a Shiba Inu growth chart.

What Is The Life Expectancy Of Shiba Inus?

Shiba Inus have quite a long lifespan. They can live for 12 – 15 years. However, keep in mind that your dog will only reach this ripe old age if he is allowed to live an active life and if you take special care to feed your dog a healthy, balanced diet and stay away from treats.

The Shiba Inu is a healthy breed, but like other breeds, this breed is also prone to certain health conditions.

When you buy your puppy, search for a reputable breeder who will provide you with health clearances for the common health conditions this breed typically suffers from. This step will ensure that you buy a healthy dog that can have a long life.

How Much Does It Cost To Own A Shiba Inu?

These figures take into account medical expenses, veterinary costs, food & supplies, training and grooming costs, a dog license, and a microchip. These are just the essentials. Optional costs like pet insurance, dog boarding, the services of a dog walker, and sterilization can add a lot to these figures.

As a breed, Shiba Inus tends to be healthy. They are, however, prone to eye problems, weight problems, and also joint problems.

These dogs get cataracts or distichiasis when too many hairs grow inside the eyelid and then irritate the surface of the eye.

Shiba Inu dogs have an increased risk of obesity, and unfortunately, their thick coat can hide this fact. Obesity can cause serious health problems, including too much strain on the bones and joints, which causes pain and mobility issues.

The Shiba Inu, like other dogs, are susceptible to, but will not necessarily one or more of the following conditions: hip dysplasia, hypothyroidism, patellar luxation, epilepsy, cancer, glaucoma, fluid in the chest cavity, and allergies.

The well-bred and properly socialized Shiba Inu will be a good-natured and devoted family dog. Because they are strong-willed these dogs must be properly and consistently socialized from an early age.

Many people buy themselves a Shiba Inus without any clear understanding of what it entails to own one of these dogs. When the dog reaches adolescence, and hasn’t been socialized consistently, they become difficult to handle and the sad truth is that many of them land in shelters.