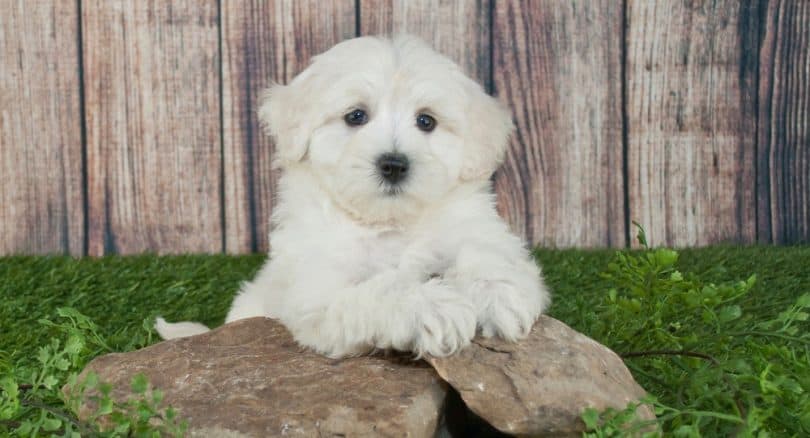 If you have been charmed by the adorable nature of a Maltipoo, you might be wondering what to expect out of your new puppy.

With a combination of a Maltese and a Poodle, the mixed breed may not have an exact estimate as you are trying to work out a final size.

Looking at a Maltipoo growth chart is the first step to take in working out how big your puppy is going to be, but there are many other factors at work as well, including the type of poodle the Maltese has been bred with and other health factors. Here is what you should know.

At What Age Is A Maltipoo Full Grown

When trying to estimate when your Maltipoo will be full grown, the first factor to think about is what kind of poodle was the Maltese bred with.

If it is a toy poodle, then you know that the puppy is going to be smaller and will therefore be done growing sooner than a larger dog will be. Smaller Maltipoos can reach their full size between 6 and 9 months of age.

Maltipoos that are made up of a standard poodle can continue growing up until a year of age, though some will finish growing at around 9 months.

A good indicator on this is how large the puppy’s parents were. The larger breeds always take longer to reach their full size than smaller breeds will and that is reflected in the Maltipoo.

As long as your puppy is staying on the same growth curve throughout his development, however, you have nothing to worry about if your pup seems larger or smaller than you expected him to be.

On another note with Maltipoos, they might reach their full-size when they are a year old, but they still maintain puppy-like behaviours until they are at least 2 years-old.

Toy Maltipoo: When you are looking at the Maltipoo growth chart for a toy Maltipoo, you will follow your puppy’s age in weeks and align it with the average weight that your pup should be.

For example, if your toy Maltipoo weighs 2.5 pounds at 4 months old, you can also expect him to weigh 4 pounds when he is 9 months old.

Your toy Maltipoo should finish growing before a year of age. On average, a toy Maltipoo can weigh between 5 and 10 pounds and stand between 6 and 11 inches tall when he is done growing, but there is a lot of variation in size with this breed.

Mini Maltipoo: Despite the name, a mini Maltipoo is actually larger than the toy counterpart. Following the Maltipoo size chart, a Maltipoo who weighs 5.5 pounds at 4 months old should weigh around 12 pounds at a year of age.

On average, an adult mini Maltipoo will weigh between 12 and 15 pounds and stand 11 to 14 inches tall, making them still smaller dogs, but bigger than the toy and teacup Maltipoo varieties.

It is ok if your Maltipoo is larger or smaller than the averages, as long has he is growing along his own growth curve consistently.

How Big Will My Maltipoo Puppy Get

When you adopt a Maltipoo puppy, you might be wondering how you can work out how big he will be when he is done growing.

Following the Maltipoo weight chart will give you averages, but your puppy might not align with the estimates perfectly, making it harder to predict how big your Maltipoo puppy will get.

Since Maltipoo size is greatly determined by the size of the parents, you should start by looking at the parents of your pup.

If your puppy has small parents, then you can expect a smaller Maltipoo. If you have not seen the parents, you might want to look into an animal DNA test and see what the breed breakdown is.

Maltipoo Growth Chart – What To Expect 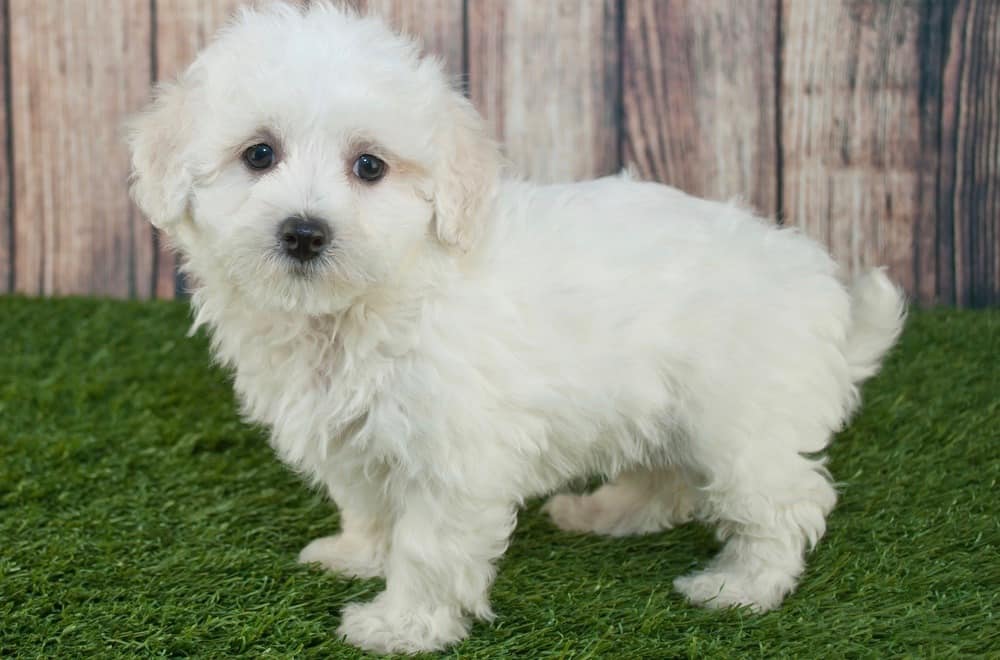 Maltipoo puppies are not very large when they are born, weighing only a few ounces up to a half of a pound, depending on the Maltipoo.

They will gain weight in the first couple of weeks of life, but it will happen slowly. They should be completely reliant on their mother’s milk at this age and will not stray far from her as their movements will be very limited at this point.

There is a major amount of growth that happens between 3 weeks and 12 weeks of age. The puppies will still be with their mother and reliant on her milk up until they are 6 to 8 weeks old.

At this point, they will need to switch to puppy food. They will also be moving around a lot more, so expect them to be very busy and very hungry all of the time.

At 4 months of age, your Maltipoo should be about half of his adult weight. Some Maltipoos finish growing right about 6 months of age, especially when it comes to the smallest of the Maltipoo breeds.

His growth should be slowing down around this point as well. The puppy should be eating 3 meals of puppy food a day and be getting plenty of play and exercise throughout the day.

Some of the Maltipoo breeds will become their adult size between 7 and 9 months. This applies to the toy Maltipoo breeds, which are smaller than the miniature breeds.

If you have a miniature Maltipoo, your puppy should not quite be finished growing, though the rate in which he is growing has slowed down dramatically. You should also drop your puppy’s meals to just twice a day at this point.

10 to 12 months of age is a slow growth period for Maltipoo puppies. Watch out for weight gain at this age, because if your puppy has finished growing, he likely does not require as many calories as a puppy that is still growing does. Make sure that you can see your puppy’s waist and feel, but not see his ribs.

Depending on the type of Maltipoo that you have, he should be done growing by a year of age, if not sooner. When your puppy is an adult, you will want to change him to adult food.

The puppy food is full of nutrients, but it is also high in fat and calories, which are important for growing dogs, but can cause adult dogs to become overweight, so pay attention to your puppies weight gain.

Genetics is the number one factor that determines the size of your Maltipoo puppy. If your puppy is made up of a standard poodle mixed with a Maltese, then you know that your puppy is going to be larger than a puppy mixed with a toy poodle.

Likewise, looking at the size of your puppy’s parents is going to give you a good idea of how large you can expect your Maltipoo to be when he is done growing.

Some Maltipoos are not an even mix between poodle and Maltese, and the different in percentages between the breeds will also affect your puppy’s growth.

Nutrition can also affect how your puppy grows, though maybe not in the way that you think. It is unlikely that nutrition will cause a puppy to have stunted or accelerated growth, but it can determine how well your puppy’s body is growing. 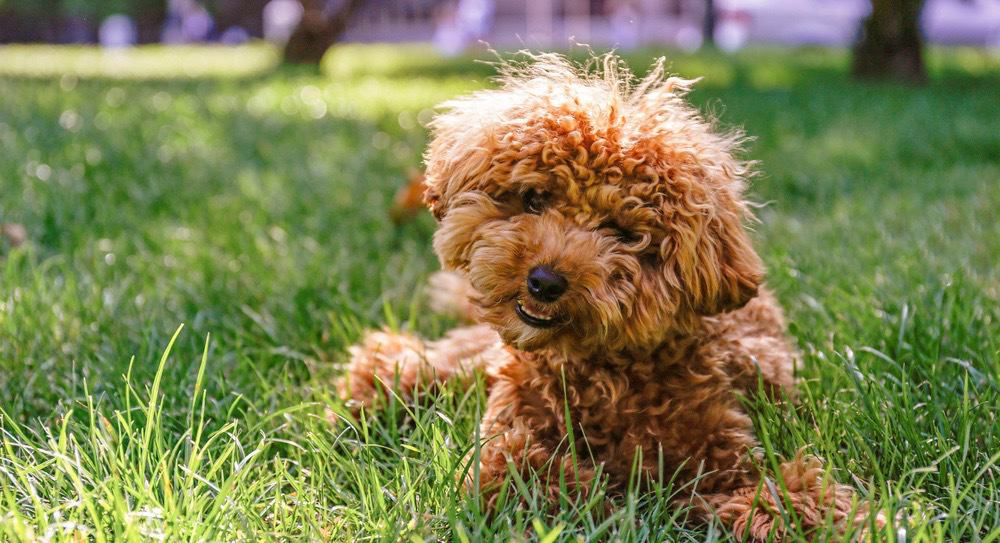 If you are not feeding him the right kind of food, he might gain too much weight too quickly, resulting in joint issues later in life.

Your puppy’s physical activity and health will also determine how well your puppy is growing. Your puppy should be active, but follow his lead on the activity.

Puppies need plenty of rest to recover, especially since they are still growing. Keeping them busy can help keep their weight down and help prevent weight-related illness, but you also don’t want to go too far to the other side and wear your puppy out.

What If My Maltipoo Is Not The Right Weight

Look through your puppy’s growth since birth and see if he has remained on the same growth curve the entire time. If he has been growing at a steady and predictable rate, then you have nothing to worry about.

Some pups are bigger or smaller than averages, simply because of their genetic makeup.

This is especially common with mixed breeds that might have a higher percentage of one breed or another, making it difficult to really compare them to the averages.

If your puppy has veered off of his growth curve by either gaining too much weight or not gaining enough weight, it would be best to speak to your veterinarian. Then, you might be able to work out whether there is anything to worry about.

How To Choose A Maltipoo Size

It might be difficult to choose which Maltipoo size is most appropriate for you, but there are some things that you can do to help yourself out.

The first is to consider how large of a dog that you actually want. If you are thinking a Maltipoo is a small, adorable little dog, you might want to opt for a smaller sized one. These dogs are usually bred with toy poodles and will reach their full-size sooner, and generally will live longer. 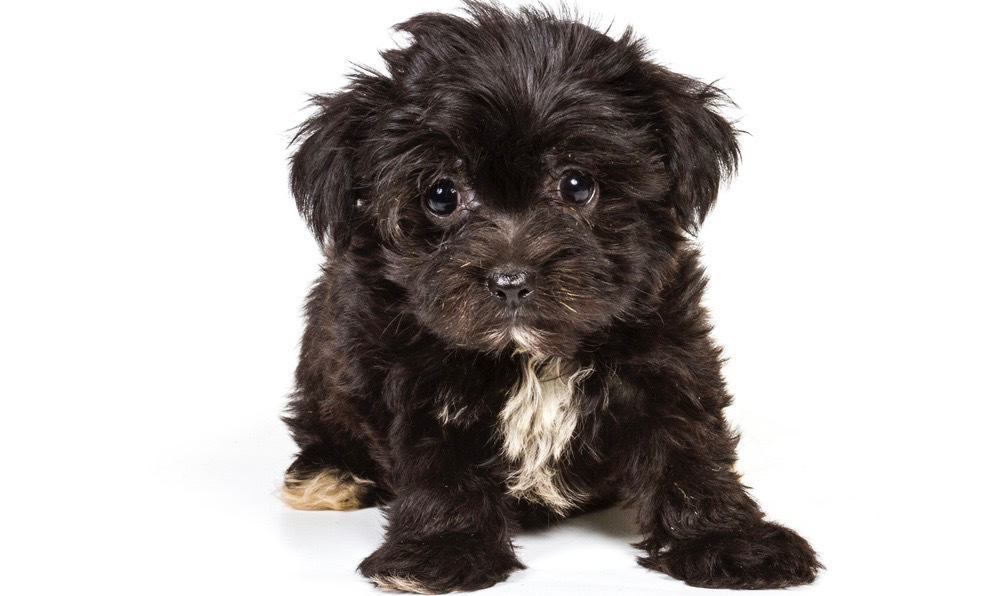 If you are instead thinking that you a want a more robust pup, you should opt for a Maltese that has been bred with a standard poodle.

Common health problems include White Shaker Syndrome for the first few years of life, where the puppy will have poor coordination. Epilepsy is also found within this breed, but controllable.

The most concerning genetic condition with a Maltipoo is the portosystemic shunt (PSS), which is an abnormal blood flow between the liver and the rest of the body. This can result in stunted growth as well as lack of appetite and poor balance. Talk to your vet about all of these conditions to see if your puppy is at risk.