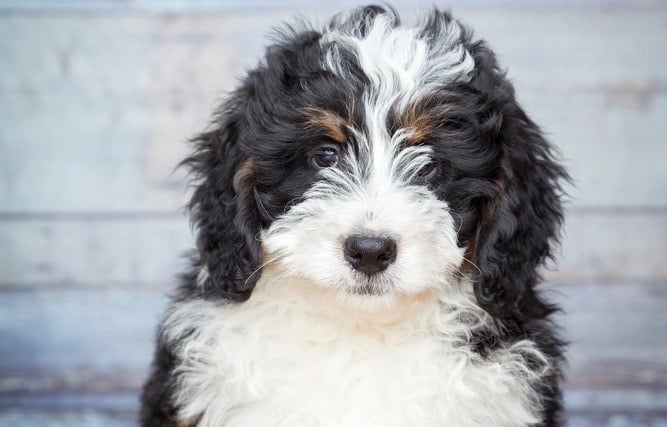 If you are considering getting a Bernedoodle, one of the first questions that you are likely to ask is how big you can expect the dog to get. After all, with a combination of a Bernese Mountain Dog and a Poodle, the pup is sure to get large.

Consulting with a Bernedoodle growth chart is the first step that you should take when gauging exactly how big your dog will get.

If it turns out that the breed is simply too large for you, you should know before you decide to adopt one. Here is what you can expect from a growing Bernedoodle.

When Is A Bernedoodle Full Grown

It is normal to ask when you can expect your Bernedoodle to stop growing. They are very large dogs and you should be able to have a rough idea about when they will reach their final size.

Unfortunately, the answer is not straightforward. There are three common types of Bernedoodles and all of them finish growing at different times. 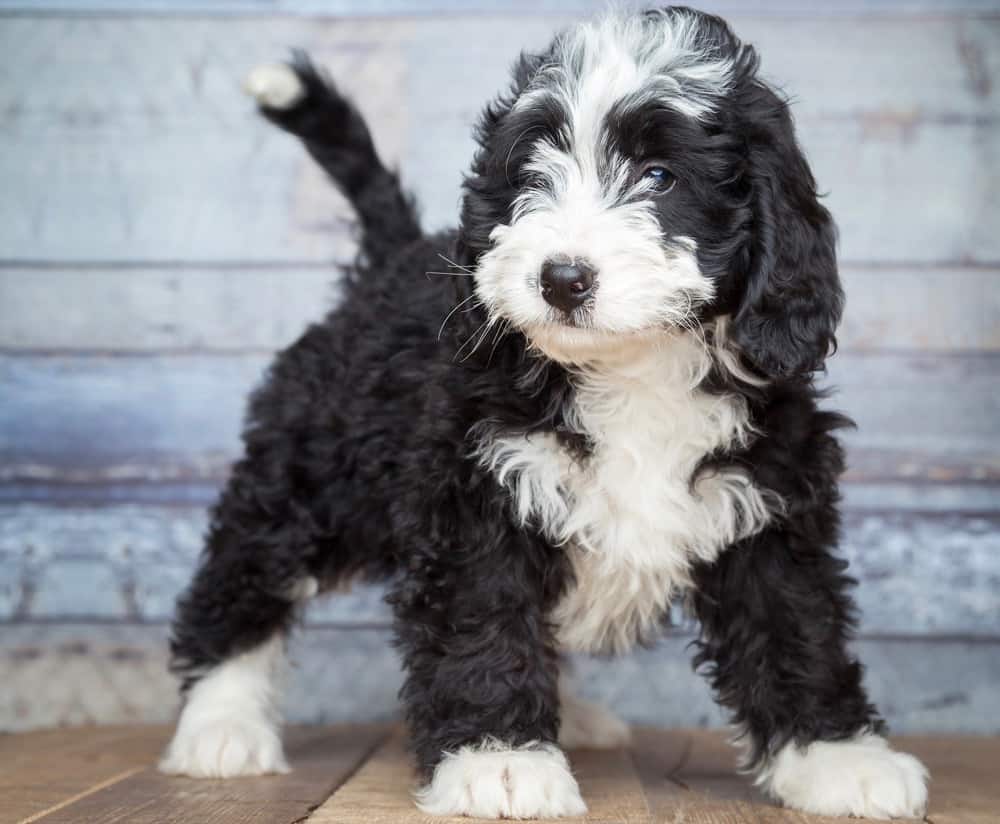 The first type of Bernedoodle is the F1 Bernedoodle. This breed is 50 percent Bernese Mountain Dog and 50 percent Poodle. They will achieve their full height between 12 and 14 months of age and reach their adult weight by the time they are 2.5 years old, making their growth period much longer than most other dogs.

The F1b Bernedoodles are 75 percent Poodle and 25 percent Bernese Mountain Dog. They will reach their full height around 12 months of age and their final weight between 18 and 20 months of age.

The third and final type of Bernedoodle is the Australian Bernedoodle, which is made up of a mix between a Bernese Mountain Dog, a Poodle, and an Aussiedoodle mix. They will reach their full height by 12 months of age and final weight by 2 years old.

Looking at a weight chart for your Bernedoodle pup is simple. You only need to use your pup’s age in weeks and follow where it lines up with the weight of your dog in order to see if your dog is following the average curve.

Heights are generally not included in the chart, but also do follow a curve. Here is how the Bernedoodle weight chart breaks down for the various sizes of Bernedoodles.

Mini Bernedoodle: Mini Bernedoodles are naturally the smallest out of the group. When they are 8 weeks of age, you can expect them to weigh around 10 pounds, which is not too different than the other types of Bernedoodles. The difference really shifts after that, however.

When your mini Bernedoodle puppy is 20 weeks old, he should weigh right around 20 pounds. They will not get too much bigger after that, achieving full-size right about 44 weeks, but their growth slows down dramatically.

Since they are smaller dogs, their height range is between 12-17 inches and their max weight is around 24 pounds.

Looking at the Bernedoodle size chart, you will see that they can weigh about 15 pounds at 8 weeks of age, jumping up to 35 pounds by 20 weeks of age.

They reach their maximum size at about a year of age, making them reach their final size before the Standard Bernedoodle does. There is still a healthy variety in weights and heights in this breed, so don’t worry if yours doesn’t quite fit.

When a Standard Bernedoodle is 8 weeks old, he can weigh as much as 25 pounds already. He will continue to grow very quickly, reaching 45 pounds by the time that he is 20 weeks old.

The max height for a Standard Bernedoodle is between 23 and 29 inches from the shoulder. Their max weight can be between 70 and 90 pounds, but it might also be different if your dog’s growth curve is different.

How Big Will My Bernedoodle Puppy Get

It is completely common to wonder how large you can anticipate your Bernedoodle getting. Since it is a mixed breed, it is a little bit harder to guess than a traditionally purebred dog would be.

There are still some things that you can try, like using a DNA text from Embark to find out your dog’s precise genetic makeup and to get an idea of what is coming.

Your dog should grow along a standard growth curve. That means that he should be growing at his own pace, which might not completely align with the averages or expected growth rates. As long as a dog stays on his growth curve there is nothing to worry about.

There are still some averages that might help you out, however. The average Standard Bernedoodle dog will reach a final weight between 70 and 90 pounds, depending on the dog and the sex of the dog.

Female dogs are lighter than males usually. Additionally, you can expect a maximum height around 29 inches from your dog.

Bernedoodle Growth Chart – What To Expect 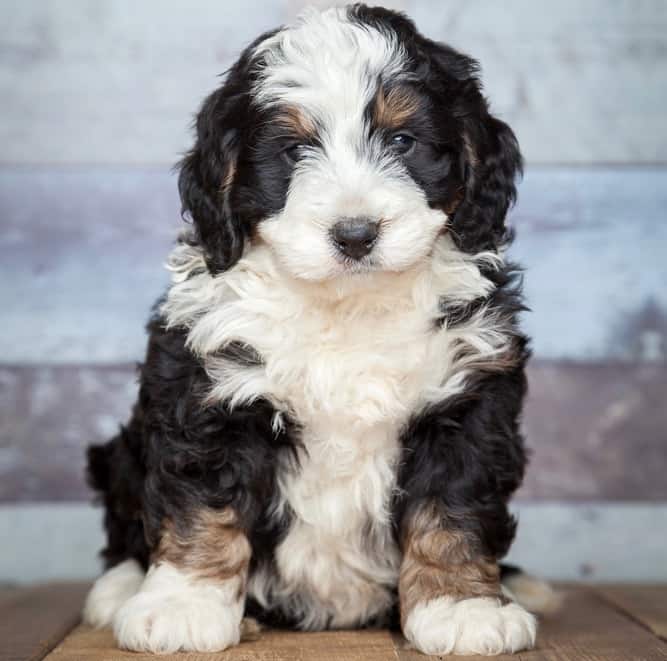 While it does depend on the type of Bernedoodle that you get, on average, you can expect a newborn Bernedoodle to weigh around 1 pound at birth, but that should double within the first week or so.

They will be completely dependent on their moms at this point and will not be moving much. They also will not be drinking or eating anything other than the mother’s milk at this point. It is vital for development.

Your Bernedoodle puppy will be growing quickly at this point. Where the pups are generally close to mom at the first part of life, they will not take too long to begin to get into some good mischief.

By 12 weeks of age, you can expect your Bernedoodle puppy to weigh as much as 35 pounds. At this point, he will have completely weaned off of his mother’s milk.

When your Bernedoodle puppy is between 4 and 6 months of age, he can weigh between 45 and 55 pounds. His growth will begin to slow around this period, but his appetite is likely still voracious.

You really need to feed up three meals a day to ensure he is getting enough calories throughout the day, as he is likely burning through a ton of calories as he plays.

At 7 to 9 months of age, you will start to see just how big of a dog this puppy will be. By the time that he reaches 9 months of age, he will weigh about 60 pounds, but he will not be done growing.

Since these dogs can still gain healthy weight until the age of 2 years, but the speed in which he is growing will slow down a lot.

There is still some growth that happens between 10 and 12 months of age. The growth will have slowed down quite a bit by this point, but you can still expect to see some weight gain.

You dog should weigh around 65 to 70 pounds by his first birthday, but that is not his final weight. He will continue to grow beyond this age into the next year of his life.

Finally, when your dog has reached adulthood, he should stop growing. You might have noticed, however, that with these dogs it does not happen as soon as with other dogs.

Bernedoodles can continue growing until 2 years of age, when they can reach their final height and weight. They will stop growing height-wise before they stop growing weight-wise, so do not panic if your dog is still gaining weight beyond his first birthday.

There are several factors that affect a Bernedoodle puppy’s growth, including genetics. Genetics is the biggest indicator of your puppy’s size.

Mixed breeds make it a lot harder to nail down an average size for your dog, but remember that the genetics are really what is going to determine your dog’s height and healthy weight. There are even different percentages with breeds that will affect puppy growth as well.

Nutrition will affect any dog’s growth as well. While poor nutrition is unlikely to affect your dog’s final height, it can do damage in other ways.

This can be things like joint dysfunction that will come up later in life. Brain health will also affect your puppy’s growth.

It is important that you give your puppy the best possible food, free from fillers and unnecessary ingredients. Do not give your puppy any supplements unless told to do so by your vet either. 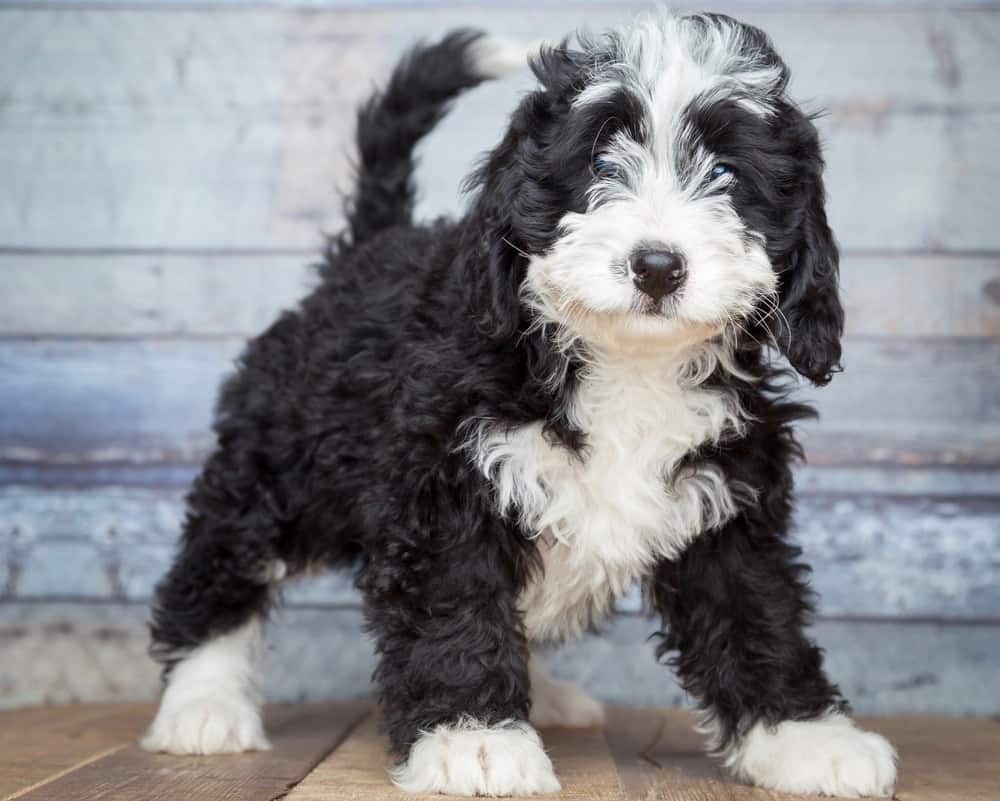 Just like with humans, physical activity will affect your dog’s overall health and can affect how he grows. Younger puppies do not need much in the way of exercise as they wear themselves out just by running around and playing and they need plenty of rest.

As your puppy grows, however, the more exercise that he will need. Walks are a great way to get some exercise in, as is playing a game of fetch with your dog.

What If My Bernedoodle Is Not The Right Weight

A common concern is whether your Bernedoodle puppy is not the right weight when compared to his growth chart. It is completely normal to have a pup that doesn’t fit perfectly in a growth chart.

Growth charts are made up of averages and not all dogs are going to fit in the spectrum perfectly, especially with a mixed breed that can have a lot of variety.

You should be able to see your puppy’s waist and feel his ribs. If his belly is sagging, it might be time to cut back his food ever so slightly, but if you can see his ribs, you need to up his food.

If there is no obvious reason why your dog isn’t on the growth chart, just ask your vet about it and rule out any illness. Some dogs are also picky with food and will not eat it, so you might need to try out a few before finding the right one.

How Many Puppies Do Bernedoodles Have?

Though, you must be warned, that it is not unheard of that the breed can have as many as 14 puppies or as few as 1. The amount of puppies that they get is based on the genetics of both the mother and the father dog.

What Is The Life Expectancy Of A Bernedoodle?

The lifespan of a Bernedoodle can vary, depending on which type of Bernedoodle that you have gone with. The smaller Bernedoodles will live longer than the larger ones.

For the F1 Bernedoodles, you can expect to keep your furry friend for about 12 years. If you have a mini version, your dog could live up to 18 years in age.

The range varies so greatly that we can only say it will live somewhere between 12 and 18 years, unforeseen illnesses aside. Keeping your dog healthy throughout his life will help as well, which means a good diet and plenty of exercise.

Generally, mixed breeds tend to fare better than purebreds, because they are not only solid genetic line. That said, there are still some things to be on the lookout for. These include hip dysplasia, elbow dysplasia, skin eyes, allergies, and even eye issues.

You should have noted that these are not dogs riddled with a lot of health issues and nothing that they might develop into something much worse.

All of the health problems that were mentioned are not life-threatening, so they should not do too much to lessen your dog’s lifespan.