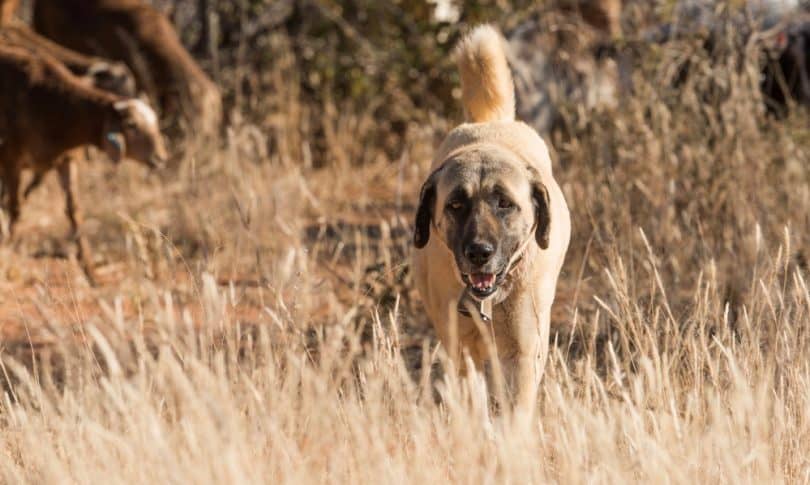 Kangals, also known as Anatolian Shepherds, are one of the largest shepherd breeds out there.

This working dog breed is dedicated to their jobs and work tirelessly to keep their charges safe. Yet, the question of Kangal bite force has come up many times.

The Kangal breed finds its origins in the Turkish province of Sivas and they are known to have been a prized and loved breed there, because of their nature of guarding livestock.

They can easily scare away wolves and other predators that might be out and about.

The Kangal breed itself is pretty easy to identify from other dogs. Anatolian Shepherds are large dogs with a coat that is completely tan.

They do not come in other colors but might come in a couple of different shades of tan.

Knowing what they look like can help you identify one if you come across one out and about. Even if you see one, however, you do not need to consider what their bite force is.

Knowing what your dog’s bite force is will not give you much information. A dog bite of any force can be dangerous and painful, whether they have a strong bite force or a weak bite force.

Table of Contents show
1 What Is The Bite Force Of A Kangal?
2 Kangal Bite Force Compared To Other Animals
3 Do Kangals Lock Their Jaws When They Bite?
4 How To Get A Kangal To Release His Bite?
5 Is Kangal Dangerous?
6 How Is Dog Bite Force Calculated?
7 Can A Kangal’s Bite Break Bones Or Kill A Person?
8 Where Are Kangals Banned And Restricted Internationally?
9 Final Words

What Is The Bite Force Of A Kangal? 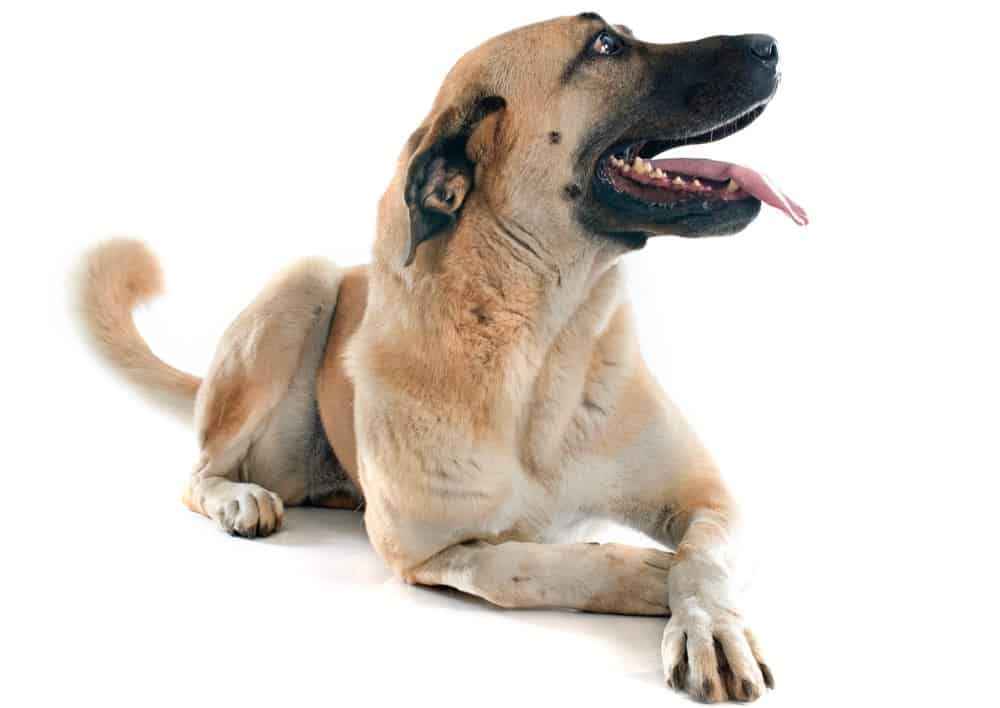 Before we jump into the exact bite force of a Kangal, let’s look at what bite force even means. Bite force refers to the strength of an animal’s bite.

This is not limited to dogs Bite force is measured using “Pound-Force per Square Inch” also known as PSI.

This means that it is calculating the amount of pressure that is applied over one square inch of one pound. It is the most universal way to measure pressure, whether it is a dog bite, or it is measuring tire pressure.

Looking at the breed specifically, the Kangal bite force runs around 743 PSI.

In fact, they are considered to have the strongest bite force of any dog breed, including Rottweilers, Pitbulls, and Bulldogs.

While the number might be off-putting, you have to remember that the breed itself is known to be very sweet and loving and is not likely to use the bite force on a person.

As we mentioned above, bite force is a measurement that is used for all animals that bite. Let’s look at a list of other animals with a powerful bite force and see how they measure up to the Kangal.

Looking through the animals listed above, your eyes are sure to draw first to the fact that a Crocodile has a bite force of 3700 PSI, which is nowhere near the bite force of a Kangal.

Looking at the other dogs, you should also note that the Bandog and Cane Corso are right under the Kangal and in the running for some of the strongest bite forces in the canine world.

Do Kangals Lock Their Jaws When They Bite? 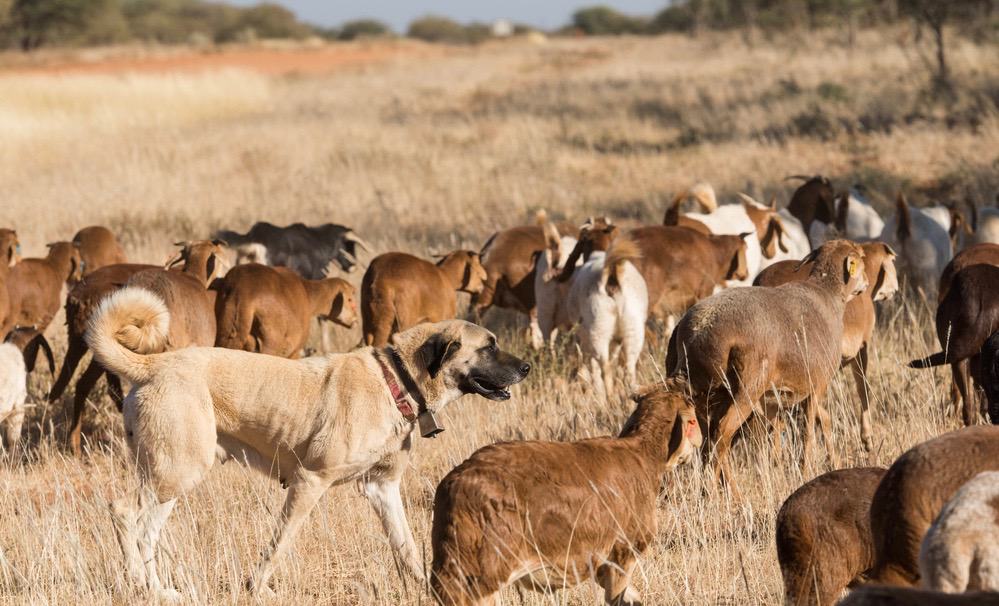 While Kangals are not known to be aggressive dogs, it is understandable if you are apprehensive knowing how much bite force their bite actually has.

A common misconception with all dogs that have a strong bite force is that once they bite down on something, their jaws lock into place, making it impossible to remove a dog once he has latched on. This is not accurate.

Naturally, we know already that Kangals have incredibly strong bites, but their jaws do not have any kind of locking mechanism. They are simply just strong.

The real danger of a dog bite does not have to do with a dog biting down hard and holding on, but it comes from when a dog decides to shake his head.

If a dog has bitten down and is holding on, and then decides to give his head a shake, that is where you are more likely to have torn skin, tissue, and potential damage to bones. This is not a concern with the Kangal breed, however. They are not likely to bite humans.

The reputation of a dog locking his jaws comes from the idea that they can keep holding onto something for a long time.

This does not have anything to do with their jaw joint doing anything abnormal but has to do with the actual strength of the muscles that surround the jaw, allowing them to keep hold of something for a long time. You are more likely to see this when they are playing with a toy.

How To Get A Kangal To Release His Bite?

Of course, the idea of a dog biting down and hanging onto something is simply terrifying, especially when you know that the dog has both a strong bite force and strong muscles that will allow him to hang on.

While there isn’t always a lot to do, you aren’t completely powerless.

If a dog has bitten down, the key is to remove the dog’s bite before he has an opportunity to shake his head. To do this, you will need a break stick.

A break stick works by slipping behind a dog’s teeth that are closed and then pushing them open, much like a car jack is used to raise up a car. 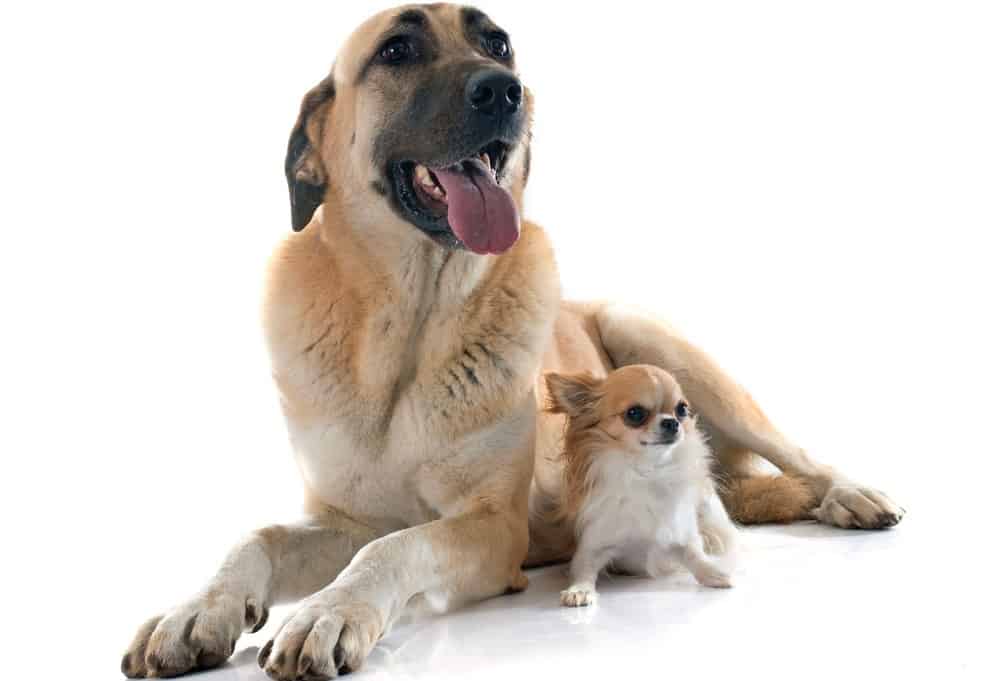 Of course, most people do not have brake sticks on them, so you might need to improvise, but it is unlikely that you will need to do this with a Kangal.

Dog trainers will often have brake sticks on them to use with training and if you happen to have a dog that might be a biter, you might want to get one too.

Otherwise, some reliable training should set you right and ensure that your Kangal does not accidentally bite someone, or do it in play.

Kangals are not small dogs and when you look at their strong bite force, you might begin to worry whether the breed is dangerous at all.

They do have an intimidating, massive body and are quite athletic. Yet, looks can be deceiving.

These muscular dogs are often used as guard dogs in protecting livestock. They are a shepherd breed and enjoy working outdoors, keeping the livestock safe from predators.

In this sense, they can be quite dangerous to predators that might be trying to make off with livestock. 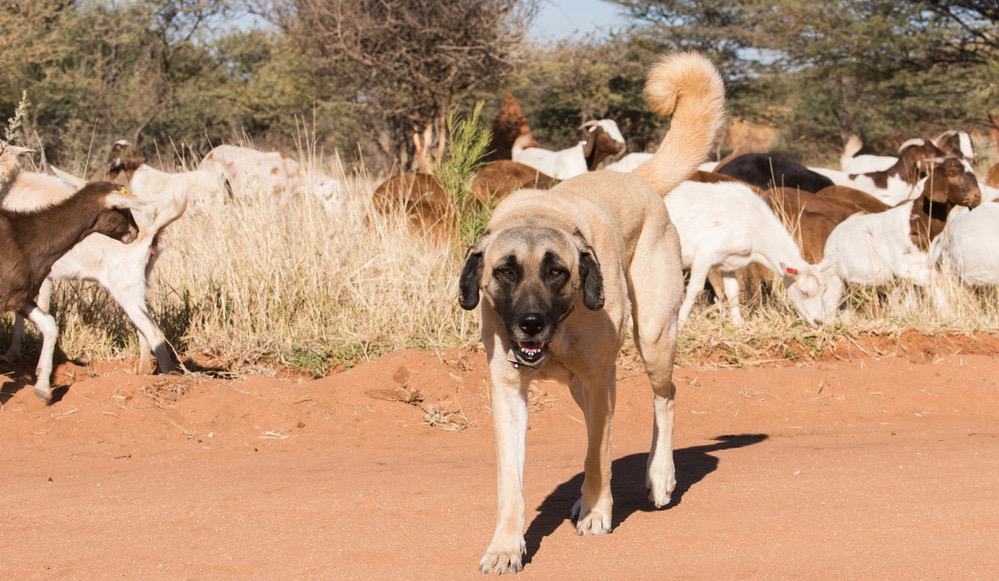 When they are off-duty, however, Kangals are gentle, loving, and predictable. They are loyal to their families and will follow commands without a struggle.

They value the things that are important to them, whether it is protecting the livestock or protecting their humans. They are calm and very controlled in their behaviour, and can resist attacking predators if ordered to do so.

How Is Dog Bite Force Calculated?

As we mentioned above, bite force is measured using “Pound Force per Square Inch” also known as PSI.

The PSI is calculated by measuring using digital bite meters. Researchers usually work out a bite force by placing an animal under anesthesia any either using mechanical or electrical measuring devices to work out the actual strength of a dog’s bite.

In modern times, researchers usually use sensitive electronic devices that are more accurate and better for the animals. 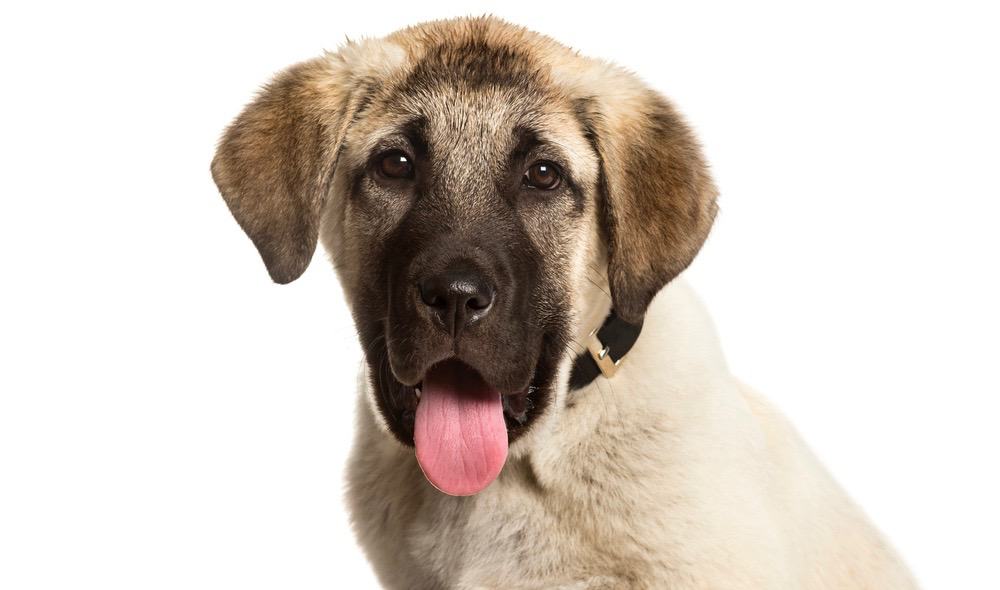 The majority of these devices can measure a wide range of force, with 80% accuracy.

They work by using transducers, or load cells, to convert the force of the bite to electrical energy that can be calculated.

The process is not perfect of course, but it is challenging to get an accurate measurement due to the range of types of bites a dog can do.

The PSI will measure the amount of pressure that a dog’s bite uses at any given point. The trick here is that the amount of PSI that they use can vary depending on the object that they are biting.

This means that the dog is not going to use the same amount of force playing as they would if they were defending themselves.

Can A Kangal’s Bite Break Bones Or Kill A Person?

Because of their strong bite force, a common concern is whether a Kangal could actually break bones or even kill someone. Even though we mentioned above that the breed is not dangerous to humans, it is a valid question.

When you compare the bite force of a Kangal to the other animals that we listed above, they might not look too dangerous, but then again, when you remember that they have the strongest bite of any dog, you might reconsider.

Generally, it takes 899 PSI to break a bone from force alone. This amount is clearly higher than the Kangal’s bite force, showing that simply biting someone is not likely to break a bone.

That said, if a Kangal were to latch on and hang on, they are more likely to break a bone by shaking their heads. 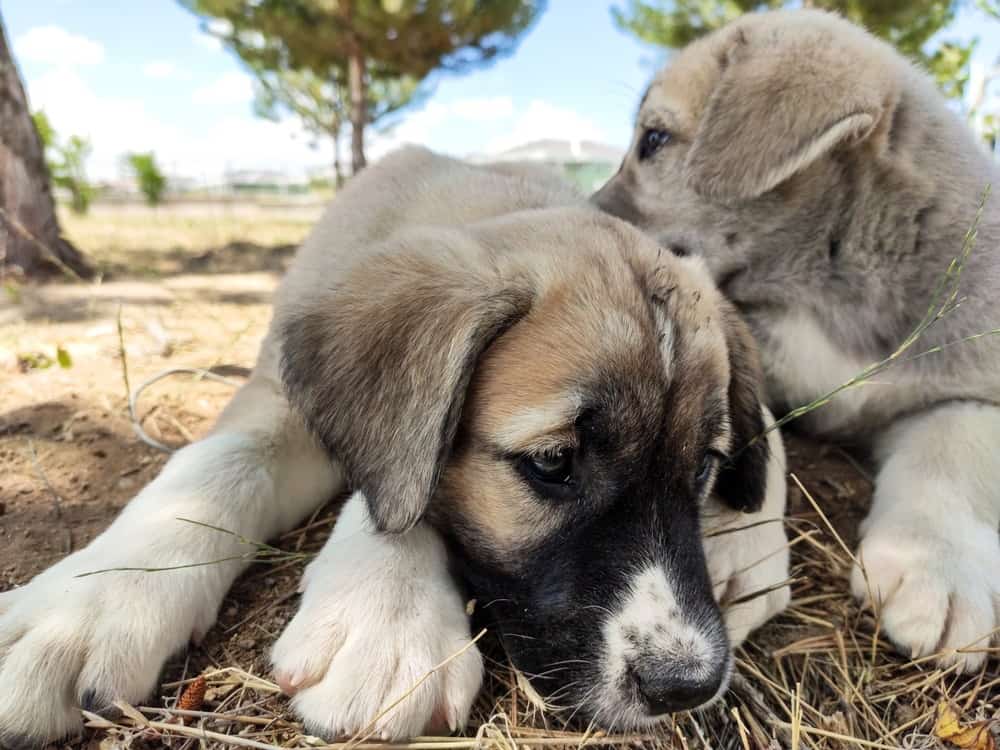 They also could kill a person by tearing essential arteries and causing extreme blood loss. Still, Kangals are not likely to do this.

Kangals are excellent at being trained and are made to follow your commands. They are not going to randomly bite someone for the sake of biting someone. The only things at risk of their bite are predators that are threatening their livestock.

Where Are Kangals Banned And Restricted Internationally?

Even though Kangals do not carry the same reputation and history that other breeds, such as Pitbulls, do, there still are some countries that have restrictions on the breed. Denmark is the only country in the world that prohibits the import, breeding, and sale of Kangals.

There are still some countries that allow them but have additional restrictions on Kangals. These countries are: Ukraine, Germany, and Belarus.

The additional restrictions include required microchipping, training, and pet insurance. There is also generally mandatory spaying and neutering of Kangals in these countries.

While they are restricted in some places, other countries embrace the breed, including Namibia, where the dogs are used to protect against cheetah attacks.

Of course, the bite force of a Kangal looks like it is intense and dangerous. While it is true that they have the strongest bite force of any dog breed, they are not dangerous dogs all by themselves.

They are loyal and loving to their families and will do well on farms and ranches, protecting animals from outside predators.

If you are considering getting a Kangal and are still concerned about the bite force, make sure to take your dog through dog training classes. Once a Kangal learns a command, you can be sure he will never forget it.